All images of food items are property of McDonalds.com

If you’re new around here, this single most important thing that I like to preach is that you can eat ANY food you like, no matter what your goals are.

Even if you have a goal to lose weight, I want you to understand that nothing is off-limits.

I love putting together nutrition guides like these (check out my Chick-fil-A Nutrition Guide or Wendy’s Nutrition Guide for more examples) to show you exactly what you can expect when ordering out.

Maybe you don’t consider McDonald’s to be the highest quality food, but when you break it down the McDonalds nutrition and calories, you can see that it’s not as “bad” as you might have previously thought! 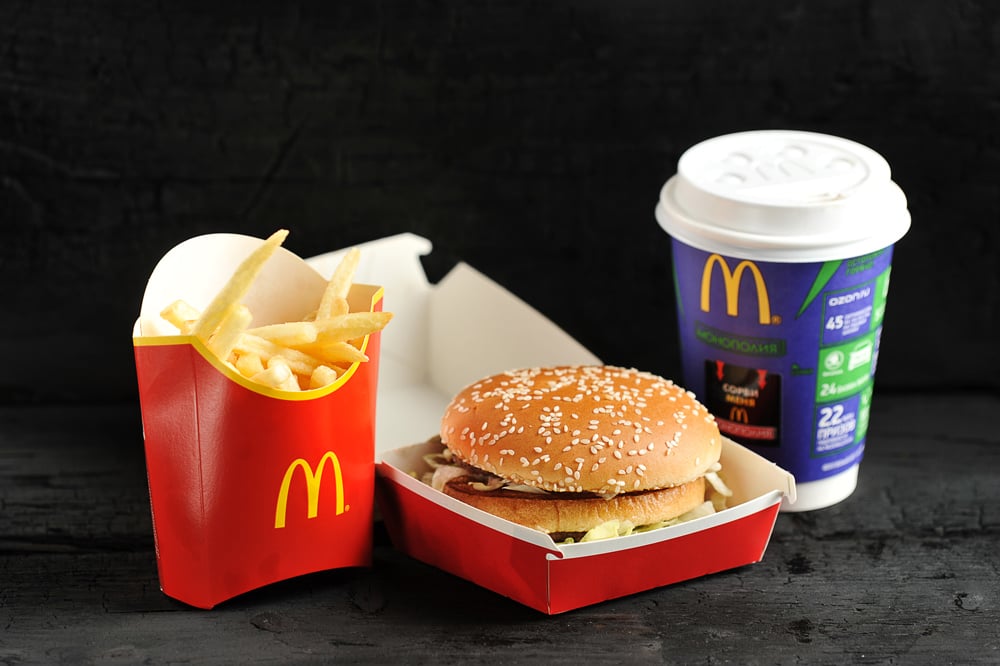 When most of us think about McDonald’s, “healthy” isn’t really the first thing that comes to mind.

Of course, how healthy or unhealthy you consider the menu to be is going to be totally dependent on your own goals and preferences.

If you are eating a high-protein diet and are hoping for some kind of grilled chicken, you’ll be disappointed by the options at McDonald’s. But that doesn’t mean that you can’t still get a quality meal at McDonald’s!

If a low-carb or keto diet is more your style, the traditional menu won’t have many options for you, but you can check out this guide from Joe Duff for some great keto-friendly options.

One thing that is worth noting is that at the time of writing this, McDonald’s is not offering any salads. This isn’t totally uncommon for fast food (Five Guys doesn’t offer any salads), but it does seem that the vast majority of fast-food restaurants are now offering salad to accommodate people who are wanting to eat healthier.

At one point, McDonald’s did offer a handful of different salads, such as the Premium Bacon Ranch Salad or Premium Southwest Salad, but we are waiting to see if they make a comeback.

If salad is something you wanted to grab next time you’re out, I recommend checking out Chick-fil-A, Burger King, or even Taco Bell, to name a few.

Note: if specific things such as sodium, sugar, trans fat, or saturated fat are a concern for you, please check out the McDonald’s website for more specific nutrition facts. 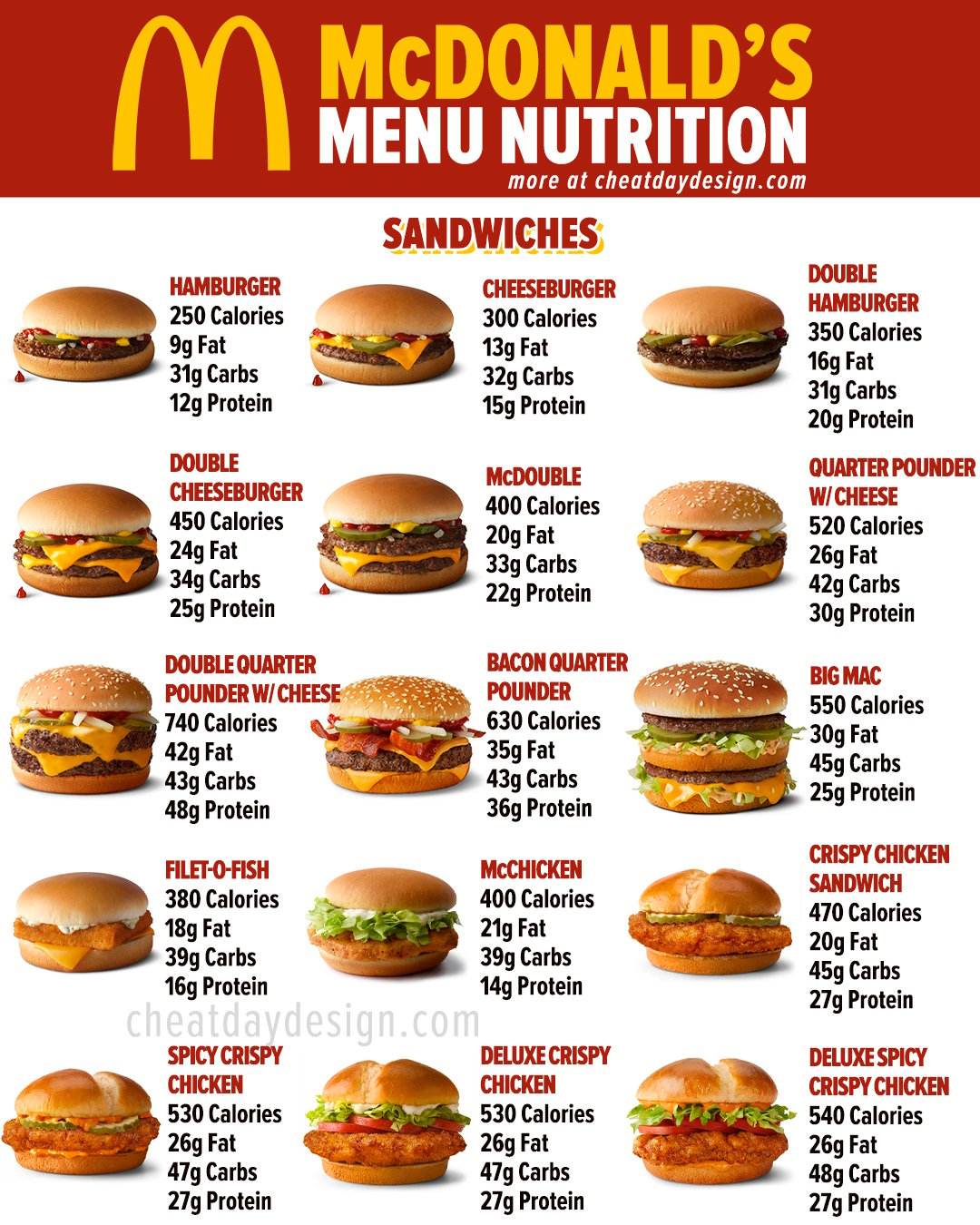 Whether you want to keep it simple with a single hamburger, or go with a massive double quarter-pounder (a half-pounder, in other words), there’s a burger on the McDonald’s menu for you.

It’s worth noting that these burgers all include condiments (ketchup and mustard) and American cheese (except for the hamburgers that don’t include cheese, of course). The condiments will generally add 10-20 calories per sandwich, with cheese adding 50 calories.

One of McDonald’s staples over the years has been the McChicken sandwich, which you may be surprised to see only have 14g of protein. With 400 calories, you’d expect the McChicken to contain more protein than it does, but since it is a chicken patty rather than chicken breast, the protein is much lower.

If you’re looking for more protein, the McChicken it is now accompanied by a handful of new chicken sandwiches, all containing 27g of protein. 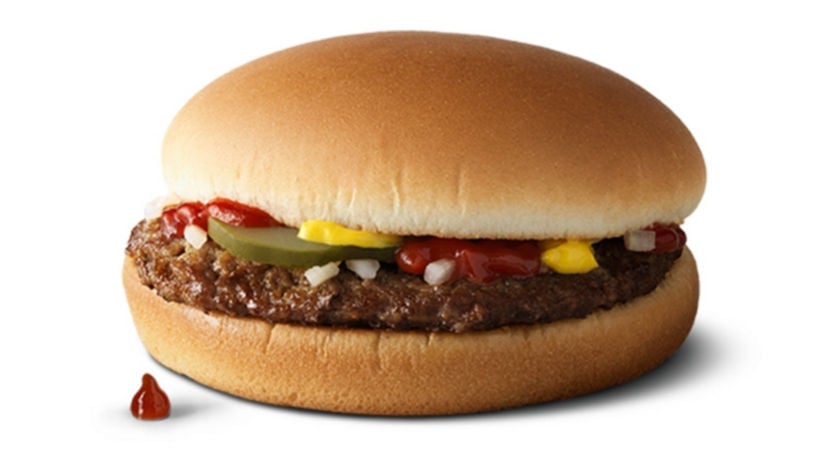 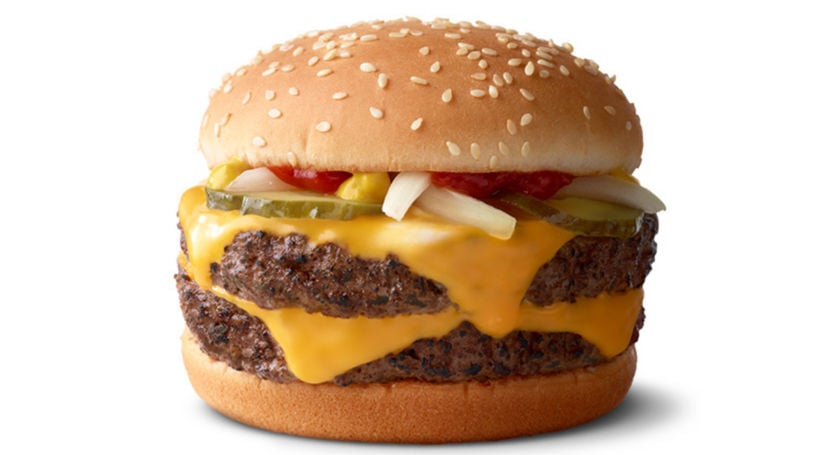 It’s no surprise that this massive half-pound burger tops the charts in terms of calories, but with that, it also packs the most protein. At 740 calories and 48g of protein, that may not be the most ideal calories-to-protein ratio, but it is certainly the highest.

It may come as a surprise to you that the Big Mac is not the highest-calorie option here. This is because the size of the Big Mac is mostly due to the extra bun in the middle, and you’re not getting as much beef as even the single quarter-pounder!

The beef is much more calorically dense than the bun due to the high fat content, thus leading to fewer calories in the Big Mac. 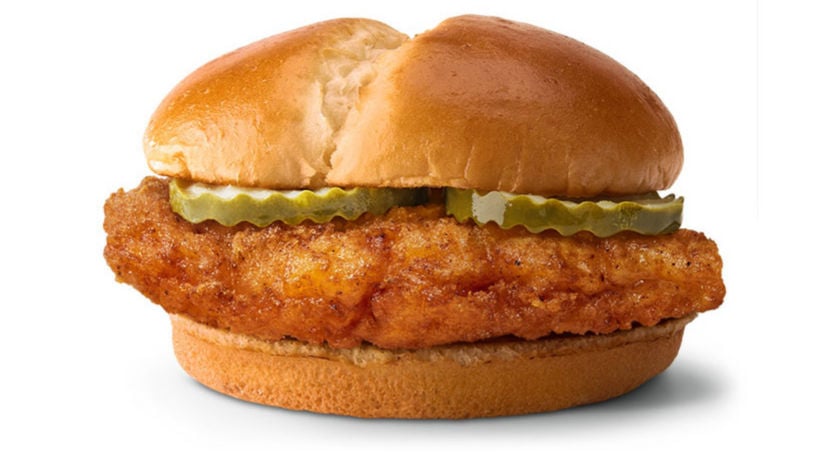 One of the newer menu items at McDonald’s is the crispy chicken sandwich, which was McDonald’s answer to Popeye’s and Chick-fil-A when the chicken sandwich wars started a few years back. If you’re looking to maximize your protein intake without going overboard on calories, the Crispy Chicken Sandwich is a solid choice! 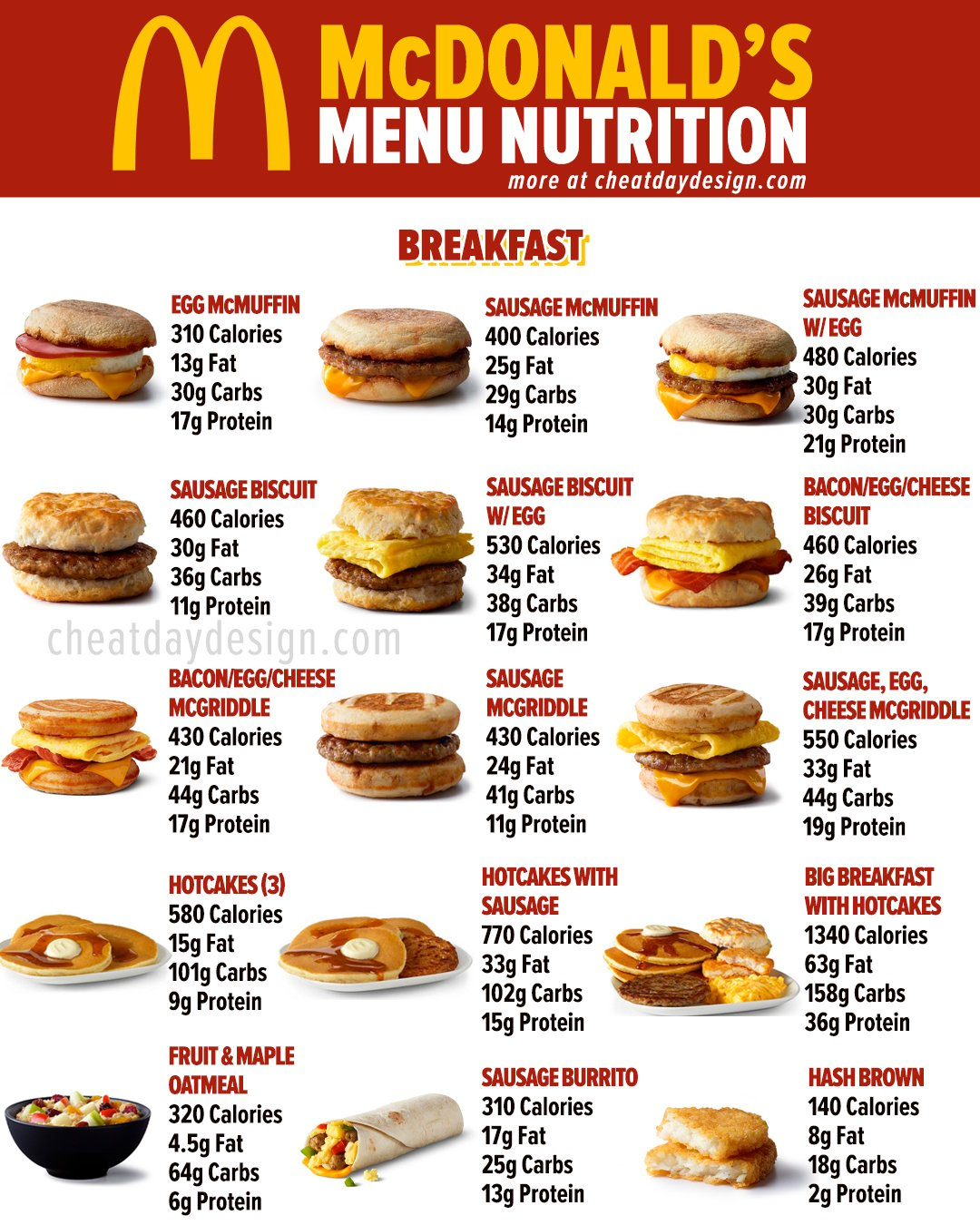 McDonald’s breakfast is just fantastic. Nutrition aside, they have the best-tasting breakfast of all the fast food out there (in my opinion… and probably Ronald McDonald’s opinion).

As much as I hate to admit it, I absolutely love McGriddles. I’m Team Waffles forever, but their fluffy pancakes make perfect buns.

Pair that with a hash brown patty (or 20 of them… those things are seriously addicting) and an iced coffee, and you’ve got yourself an amazing breakfast.

The breakfast menu at McDonald’s will vary slightly from time to time (we’re still waiting for the bagels to make a comeback) but this is the entire breakfast menu that’s available at the time of writing this.

Personally, I’m hoping to see the Egg White Delight make a comeback because that was a great low calorie, high protein option for breakfast. 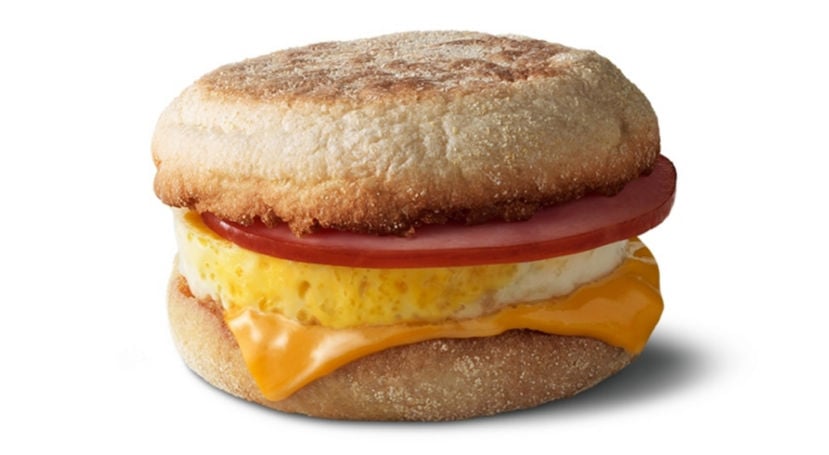 A classic Egg McMuffin is one of the lowest-calorie breakfast options you’ll find out there. Check out this graphic I made below that compares a lot of different options out there (the Egg McMuffin calories went up by 10 since creating this graphic, but it still works!) 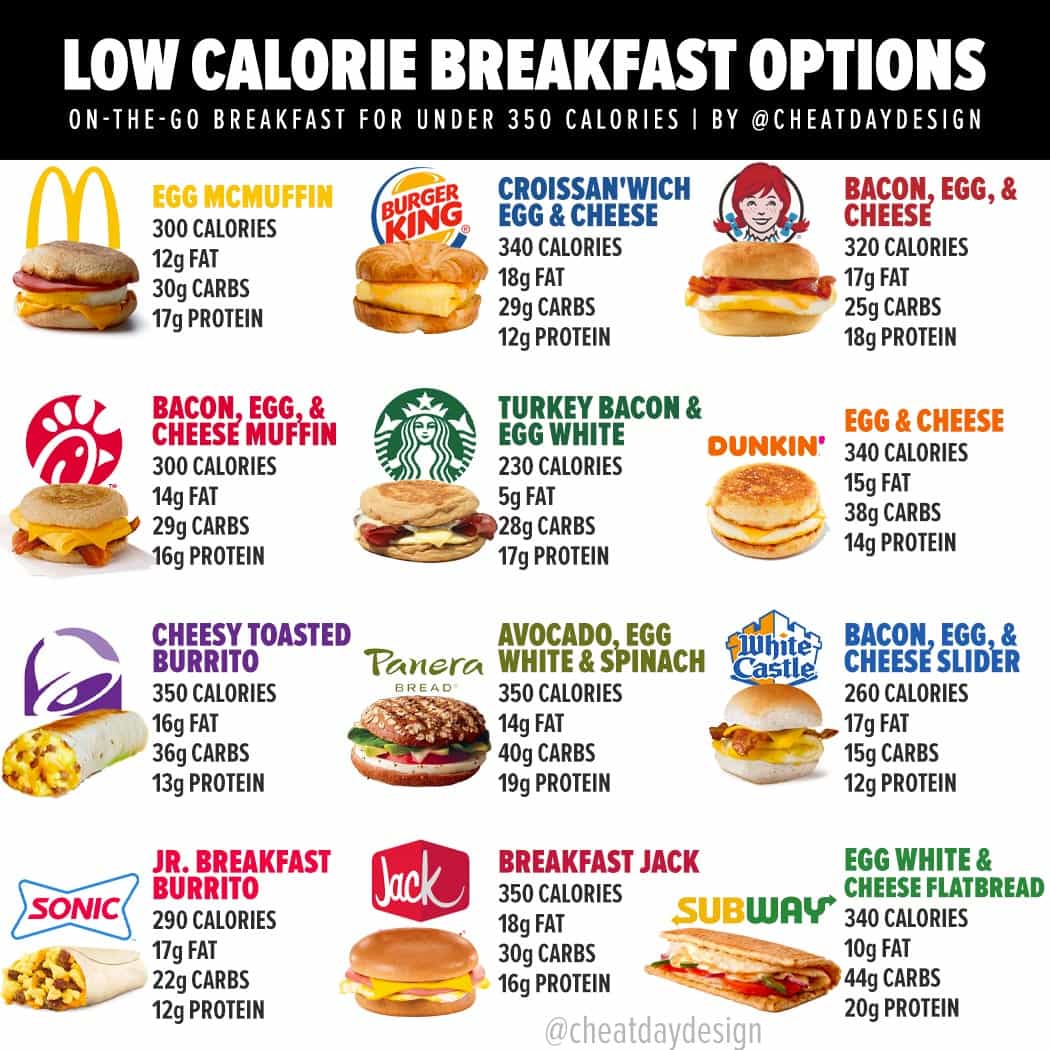 McDonald’s used to offer the Egg White Delight McMuffin, which was even lower calorie and higher in protein, but it was discontinued in 2019.

We’ll see if it ever makes a comeback! 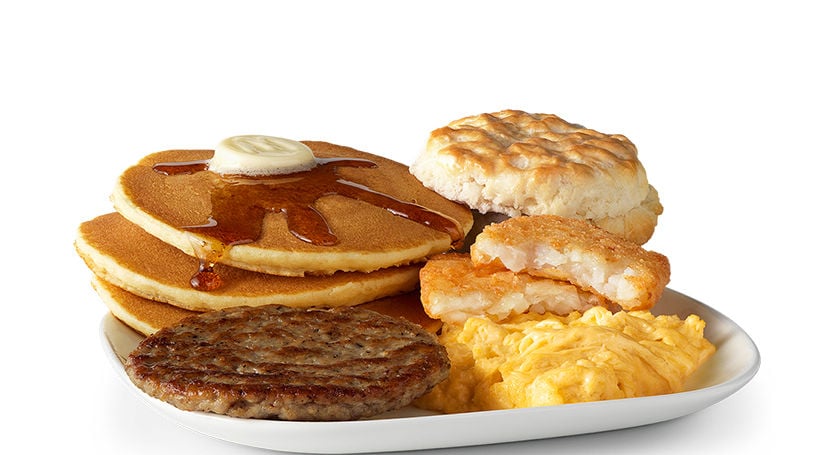 It’s called a Big Breakfast for a reason, and this thing is packed with over 1,300 calories! The Big Breakfast contains a warm biscuit, hot sausage, fluffy scrambled eggs, crispy hash browns, and 3 pancakes with a side of butter and maple syrup. In other words: it pretty much has everything!

If calories are a concern, you’re likely not ordering the big breakfast, but it sure would be filling. 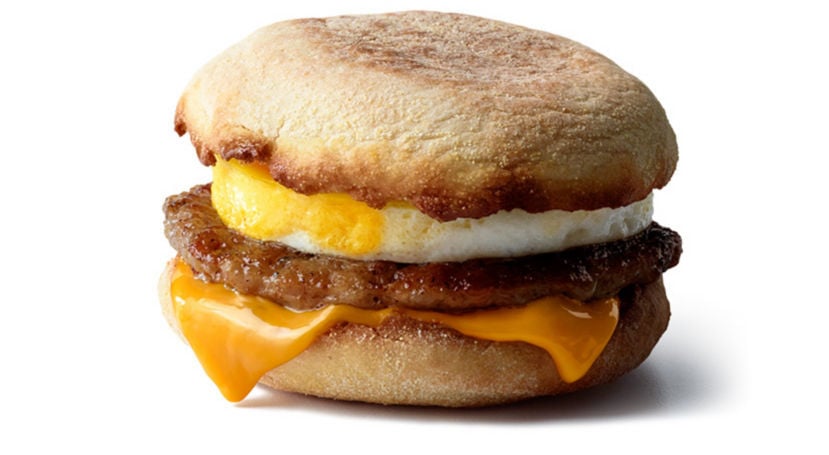 If you’re looking to get more bang for your buck, the regular Egg McMuffin is still a better choice. While it contains slightly less protein with 17g, it contains only 310 calories. 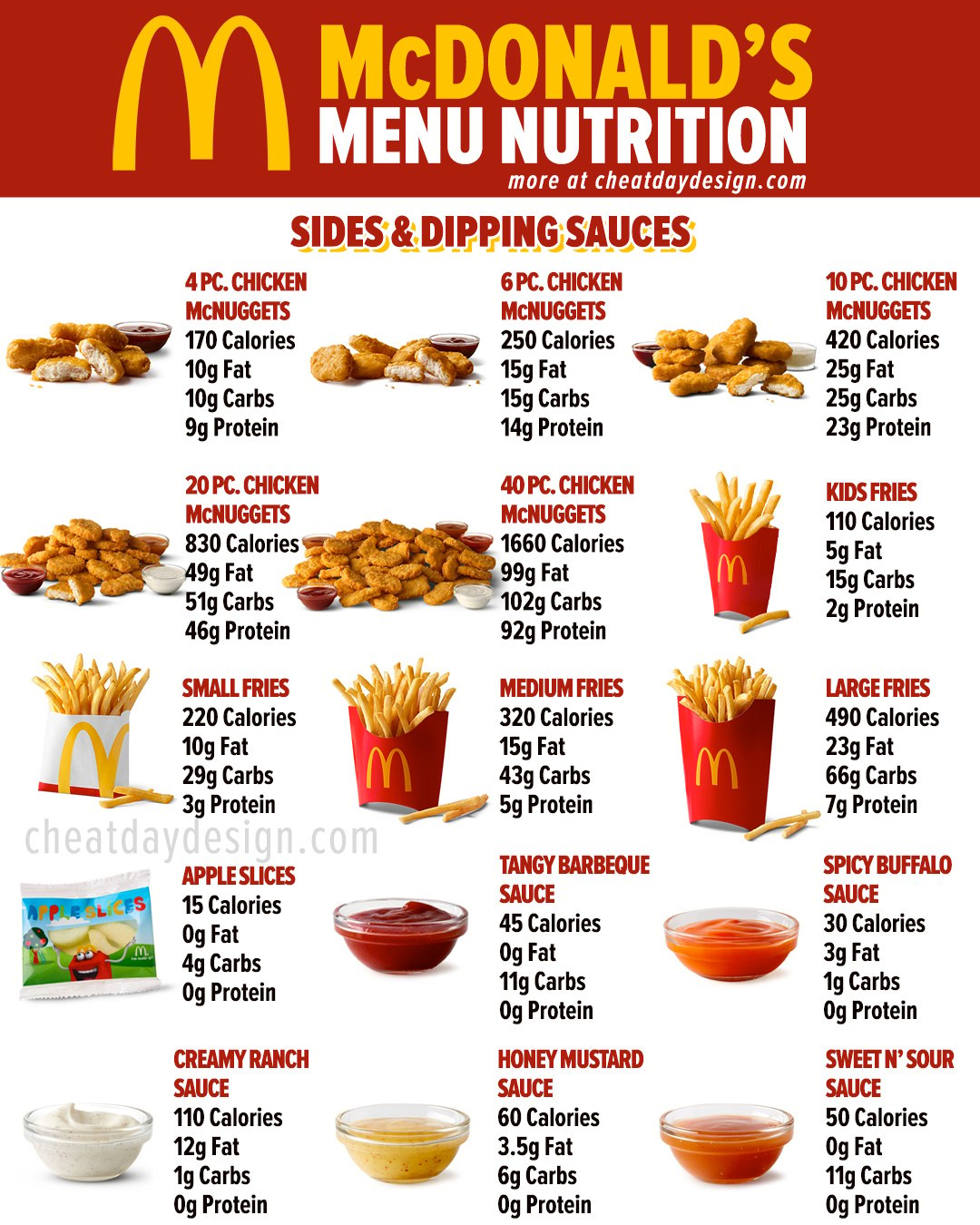 You can’t talk about McDonald’s without talking about the Chicken McNuggets and the French Fries.

McDonald’s fries are arguably some of the best out there, and they are actually on the low end of the calorie scale when compared to the other options out there. Check out this French Fries Nutrition Comparison I put together to see how these fries stack up: 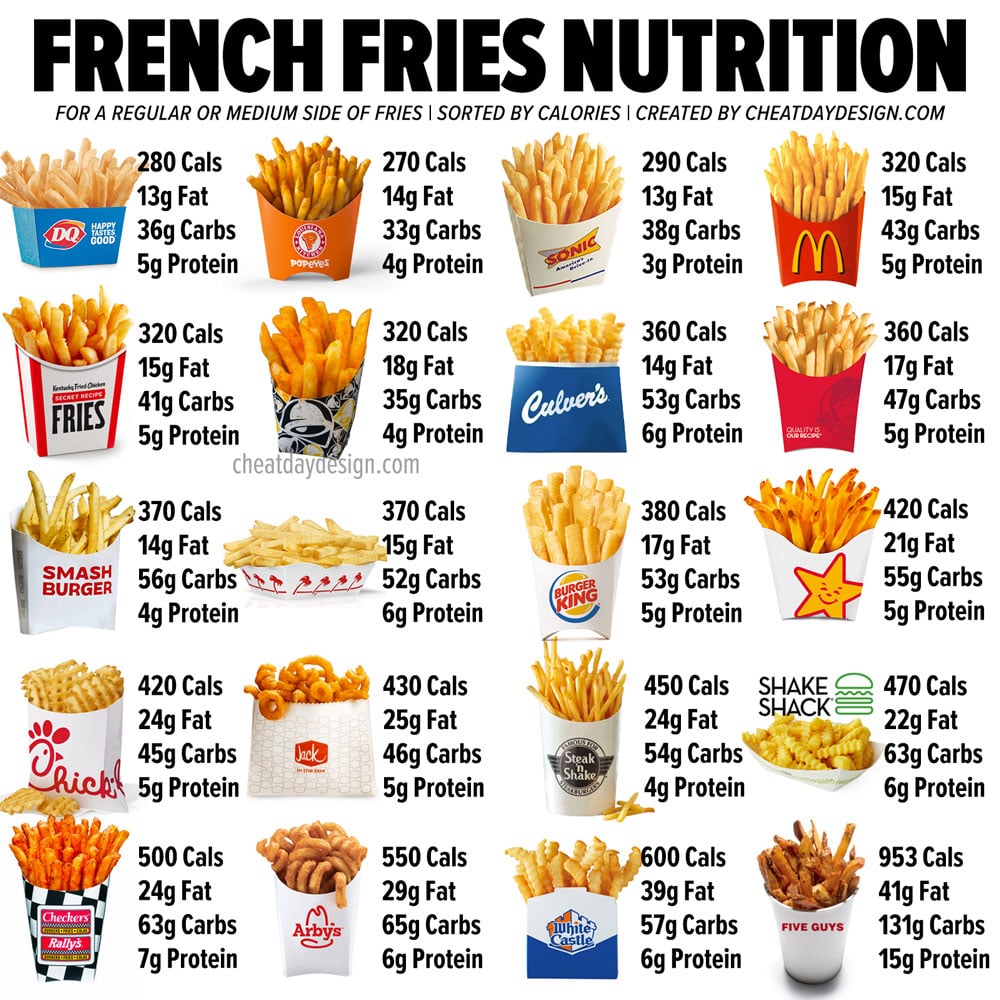 This guide compares a medium order of fries, which may vary in size depending on where you order from (we’re looking at you, Five Guys), but gives us a general idea.

If ordering a Happy Meal, the “Kid’s Fries” is the size you can expect to find within the meal.

When it comes to Chicken McNuggets, you have the option to order a small 4 piece, or go all the way up 40. If you’re ordering 40 McNuggets, that probably doesn’t qualify as a side anymore, but we’ll still count it as part of this category.

When it comes to sweets, you’re likely not ordering them to be “healthy,” and that is totally fine. These are treats, after all.

But like I always say, it never hurts to know what you’re consuming!

But, I do want to draw your attention to two things: 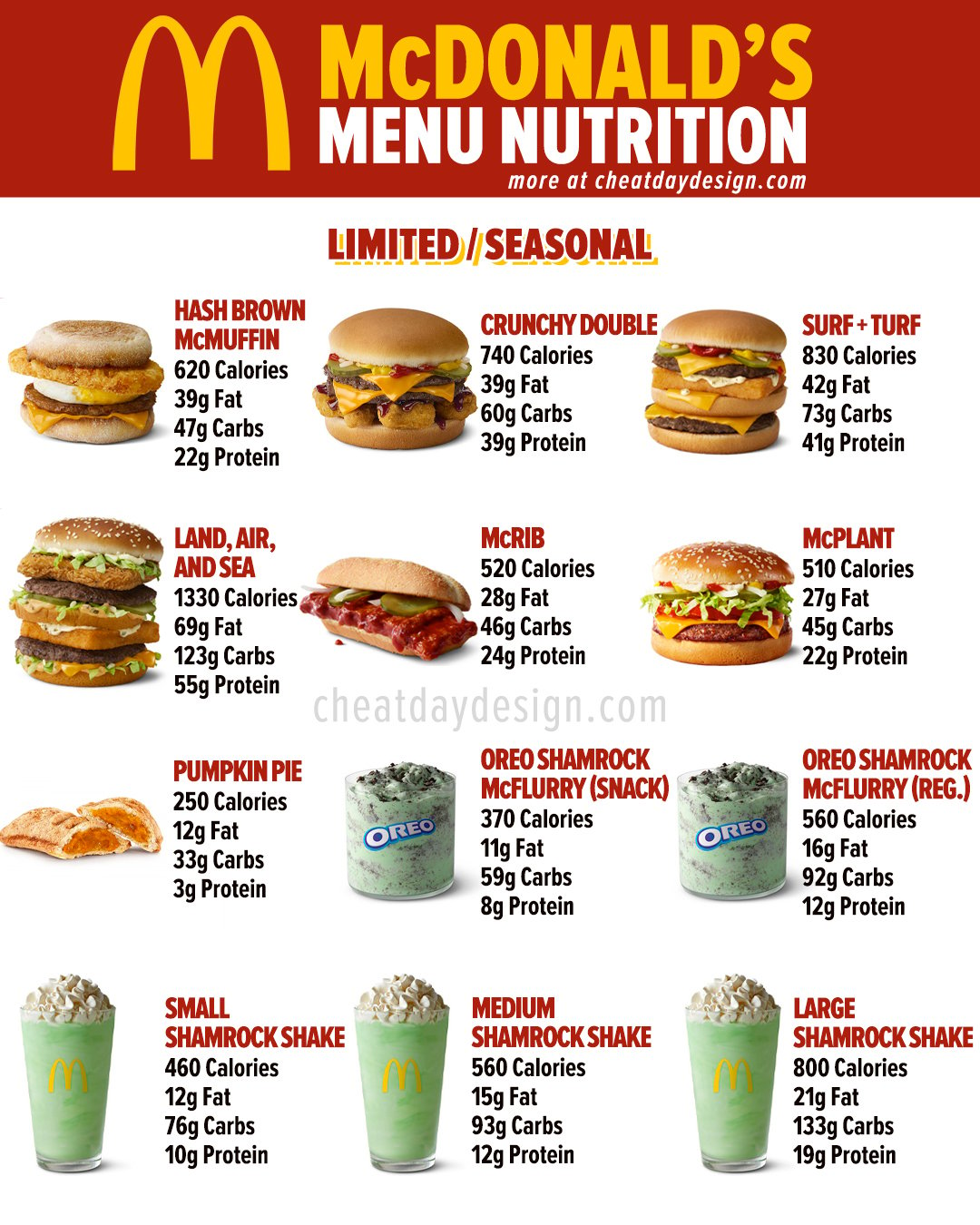 When it comes to fast food, there are always going to be items coming and going from the menu.

At the time of writing this, McDonald’s has a “menu hacks” menu for a limited time, which contains the Hash Brown McMuffin, Crunchy Double, Surf + Turf, and Land, Air, & Sea Sandwich.

The Land, Air, & Sea Sandwich combines a Big Mac, a McChicken, and a Filet-O-Fish together. It’s no wonder why it contains over 1,300 calories!

McDonald’s has also been testing their new McPlant sandwich, which is a plant-based burger made with Beyond Meat. With 510 calories, 27g of fat, 45g of carbs, and 22g of protein, it’s less impressive overall than the beef options. But if you follow a plant-based diet, it may be a great option for you!

And of course, you can’t talk about seasonal items at McDonald’s without mentioning the Shamrock Shake. While similar in overall nutrition to the Vanilla Shake & Chocolate Shake, the Shamrock Shake actually contains slightly fewer calories for each size.

Overall, the McDonalds menu has a very wide range of options, so you’re likely to find something that suits your dietary needs.

Whether or not it’s “healthy” depends entirely on what it is you are looking for.

The McDonald’s menu doesn’t contain a lot of high-protein options, and many of the items are high in fat, but that doesn’t mean it will be impossible to find an option for you if you’re looking to eat high protein or low fat.

Unfortunately, McDonald’s does not offer any salads right now, so if your definition of healthy means lots of vitamins and minerals, then you’ll be missing out at McDonald’s.

But like anything in life, moderation is always key. Even if McDonald’s doesn’t have ideal options for you, I hope this guide helps to show you that there are still plenty of options you can make work for your diet!