Raise your hand if you love ice cream as much as I do!

I’m all about ice cream… as if that wasn’t evident by my official Ice Cream Week.

And while I’m a big fan of going to a local ice cream shop and trying new flavors (and always getting a waffle cone), there’s just a special place in my heart for that smooth, creamy, soft serve vanilla cone.

If you find yourself craving some vanilla ice cream, here are some options for you!

And if you’re curious how the taste of each cone stacks up, you can check out a ranking that Thrillest put together that may help ya.

Where to find the healthiest soft serve ice cream cone 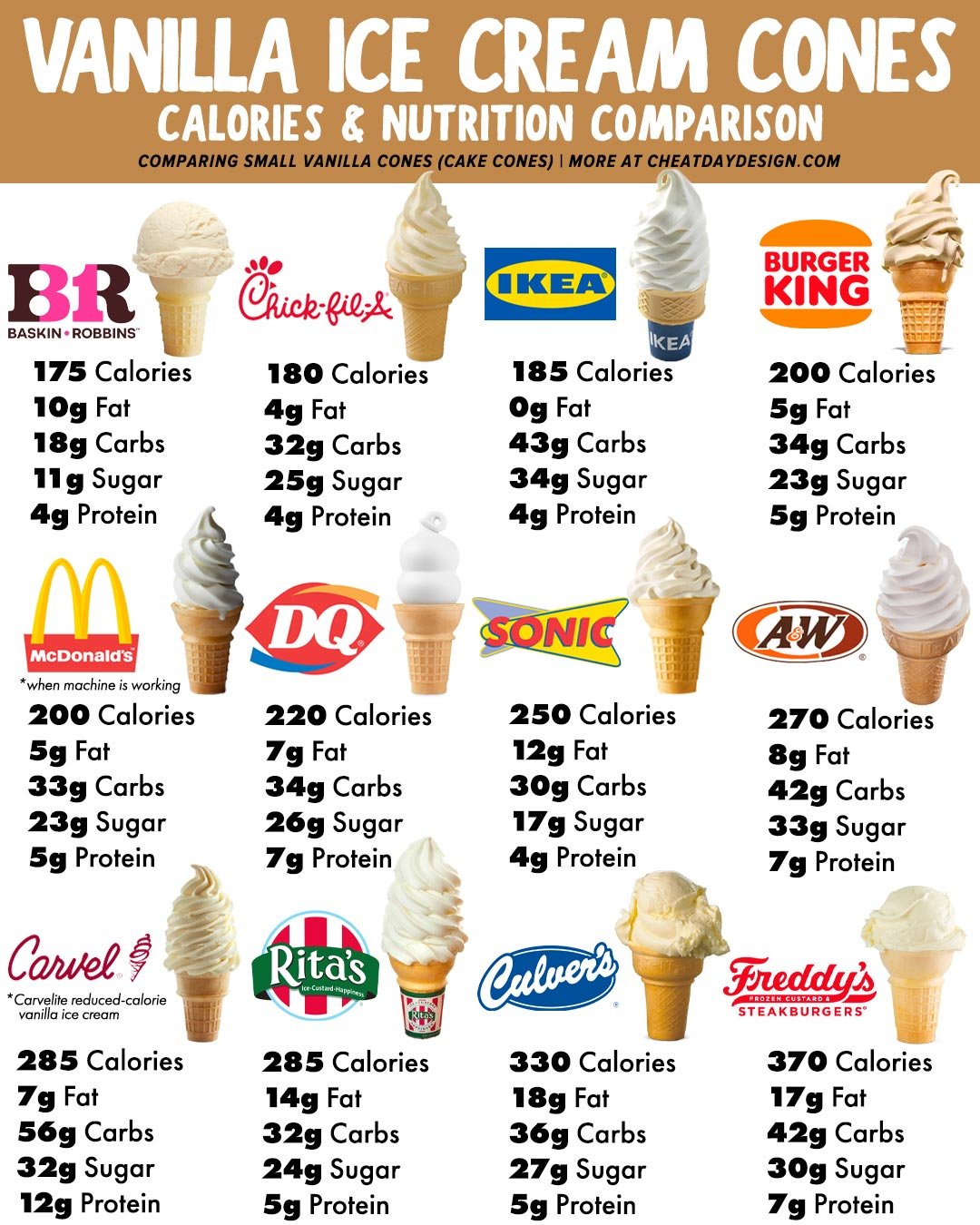 Depending on where you are located, you’re going to have a lot of options for ice cream.

I’m in Michigan, and we seem to have a little ice cream shack on every single corner. If you want an ice cream cone here, there are tons of options!

But we’re going to look at some of the most widely available options. Many people don’t realize that fast-food chains like Burger King and McDonald’s offer cones, and those types of options make it very easy to get your ice cream fix no matter where you may be located.

Let’s dive into the ice cream, taking it from lowest calorie to highest calorie.

Note that for all the ice cream cones here, it includes a cake cone. In some cases, you have the option to choose a sugar cone or waffle cone for more calories.

Also note that nutrition facts are constantly being updated, so I will do my best to keep these vanilla ice cream cone calories as up to date as possible! 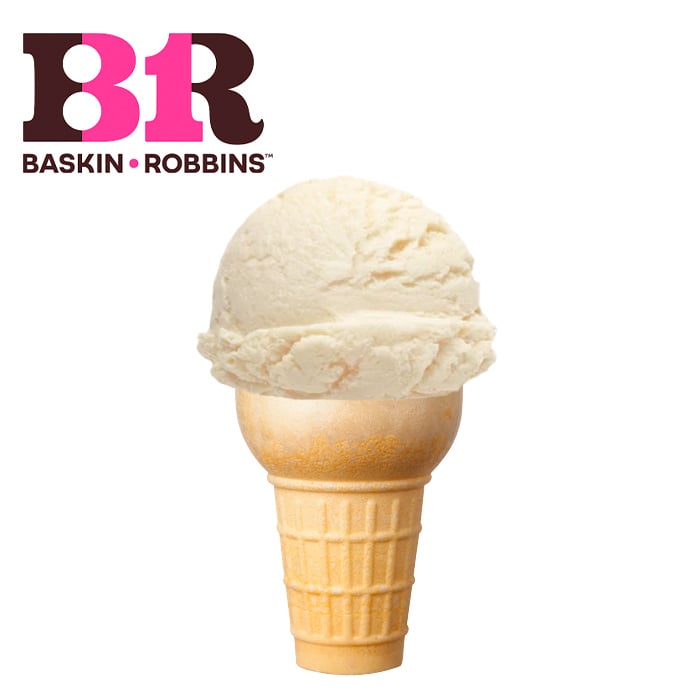 Baskin Robbins offers two different ice cream scoop sizes: 2.5oz and 4oz. The nutrition facts here reflect one 2.5oz scoop in a cake cone, which will definitely be one of the smallest vanilla ice cream cones you’ll have.

But, because of the small size, that means it will also be the lowest calorie!

For reference, if you go with a 4oz scoop, a vanilla cake cone will be 265 calories total, making it more closely resemble some of the other vanilla ice cream cone options in this guide. 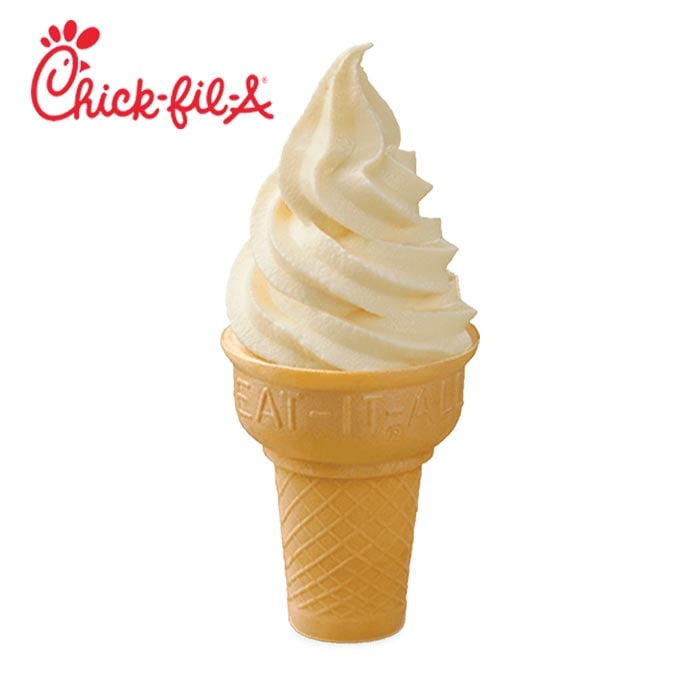 Like Burger King, the vanilla ice cream cone (Icedream® Cone) from Chick-fil-A is on the smaller side, which is why the calories are lower than other options out there.

However, Chick-fil-A ice cream is thought of as one of the best fast-food ice creams out there, so even if it’s small, it’s 100% worth it!

And if fat content is a concern for you, this will be one of the more appealing options of the bunch with only 4g of fat for the entire vanilla ice cream cone. 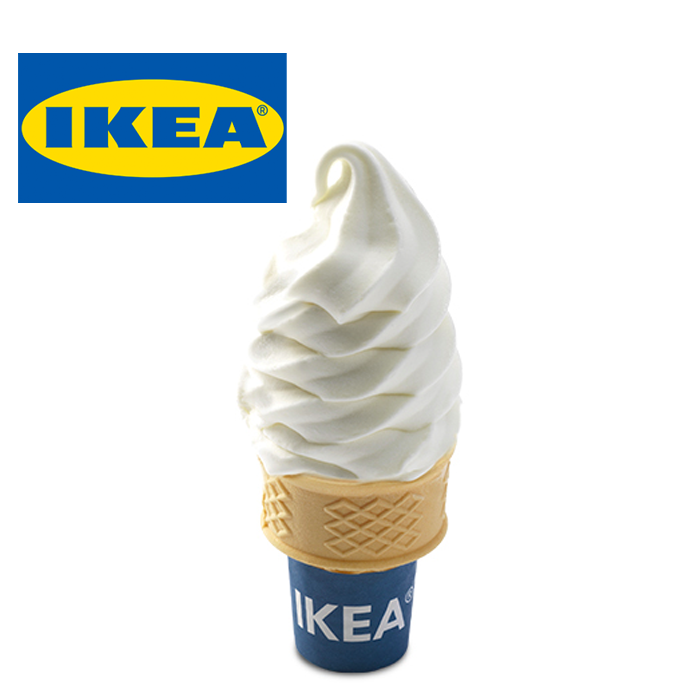 *Based on nutritional information available through ikeafoodfacts.ca

IKEA offers frozen yogurt and not technically ice cream, but the consensus seems to be that it is delicious either way. I have never personally had it because I have never lived close to an IKEA, but after hearing rave reviews about it, I feel I need to give it a try now.

Nutritionally, it is tough to pinpoint the numbers for this cone. Through some Google searching, it seems that a vanilla ice cream cone from IKEA may have 120-130 calories.

However, I was able to find these specific numbers from IKEA Canada, so that’s what we are going to go with here! No matter what, it is safe to say that the calories in this cone are fairly low, and the fat content will be the lowest option out there because frozen yogurt typically contains very little to no fat. 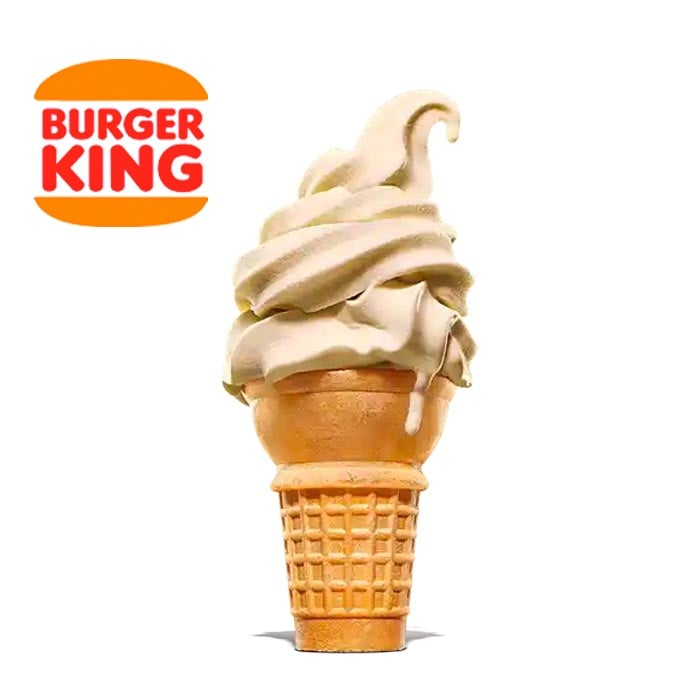 Burger King recently went through a rebranding, and with that came a revamped menu. Previously, Burger King’s cone was looking very sad and tiny, but this new photo makes it look very promising. Burger King ice cream was previously the lowest calorie option with only 140 calories for a vanilla ice cream cone, and it looks like the calories have since increased a bit.

At Burger King, you also have the option to ditch the cone and opt for a cup of soft serve vanilla ice cream instead. The serving size of the Burger King ice cream will be roughly the same, so the cup of ice cream ends up right around 180 calories. 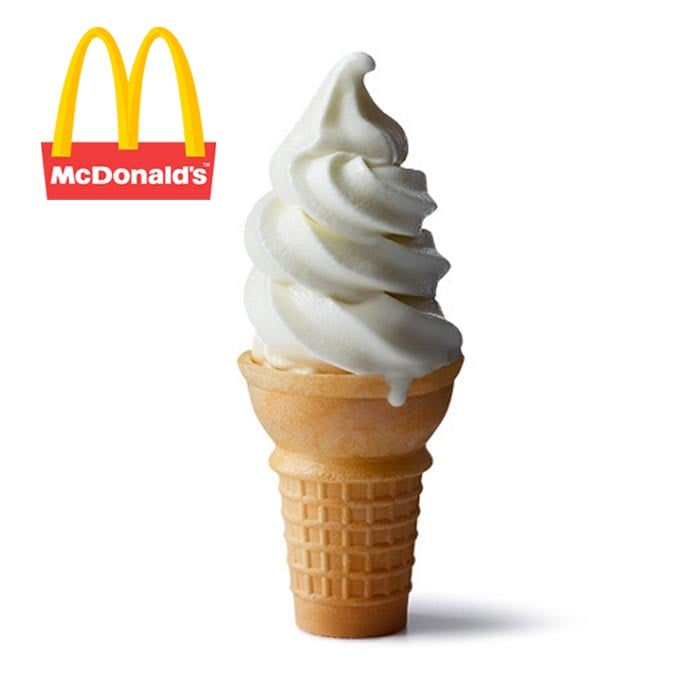 McDonald’s ice cream cones are fantastic, but you’re lucky to find an ice cream machine that isn’t broken. This happens so often (don’t worry, it’s not just you) that there is actually a hilarious, and extremely useful, website that maps out where all the broken machines are.

In terms of nutrition, McDonald’s ice cream cone falls right in the middle of all the options. For just 200 calories, a vanilla soft-serve cone from McDonald’s is a great option for a quick dessert on the go. 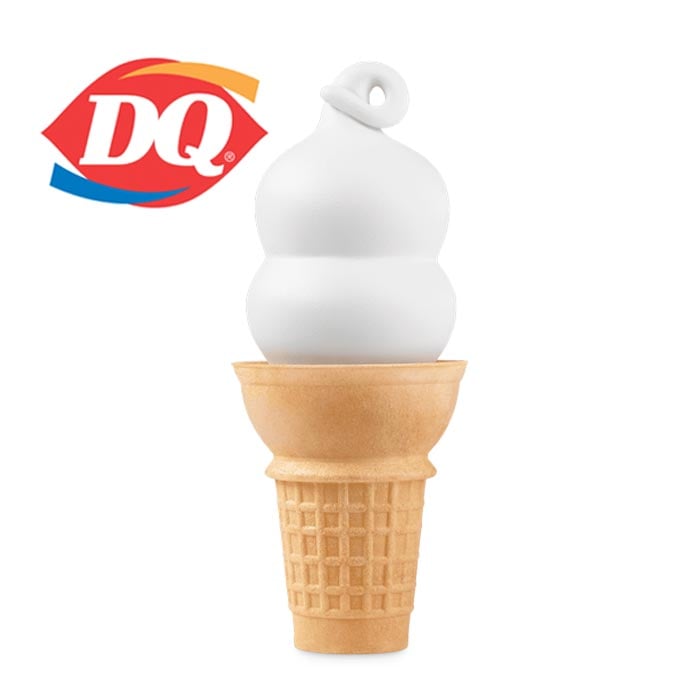 Dairy Queen is best known for their Blizzards, but the cones deserve honorable mentions for sure.

The insanely smooth soft-serve ice cream from Dairy Queen is unlike anything else out there. Since the ice cream is so rich and creamy, I would have thought that the calories and fat would be off the charts, but with only 220 calories and 7g of fat, a small vanilla cone from DQ is something you can easily fit into your day. 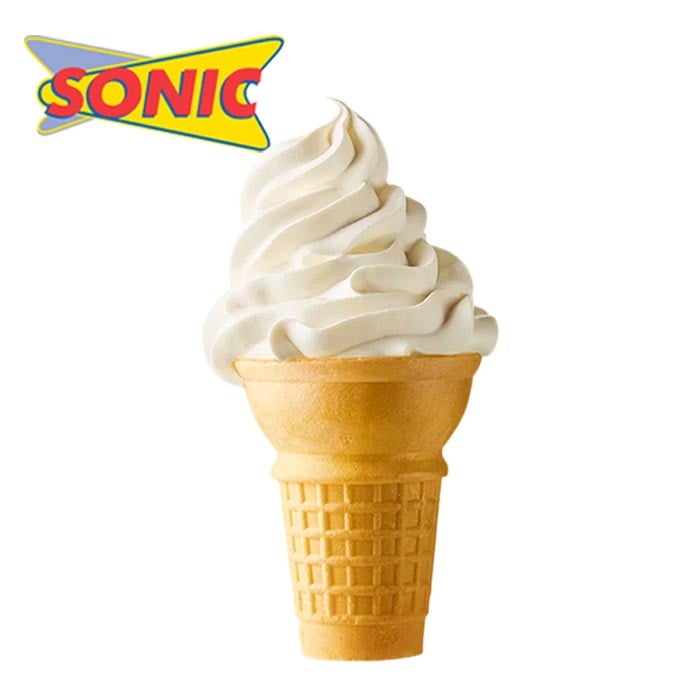 I’ve personally never had a Sonic ice cream cone, but that photo makes it look like a very sorry cone. However, this makes it a perfect time to address something:

Don’t take the nutrition of these cones too seriously.

Do you see how this photo of the cone has a very small amount of ice cream? Well, depending on when you go to Sonic, and who is serving you, they may very well be a little bit more generous with the serving size. Unlike a scoop of ice cream, it’s much harder to measure out a proper serving of soft serve, so you may end up with a larger cone than this, along with higher calories.

I don’t say that to stress you out, but it’s worth noting that all we want to be able to do here is get a general idea of the nutrition, but we don’t want to take it too seriously. 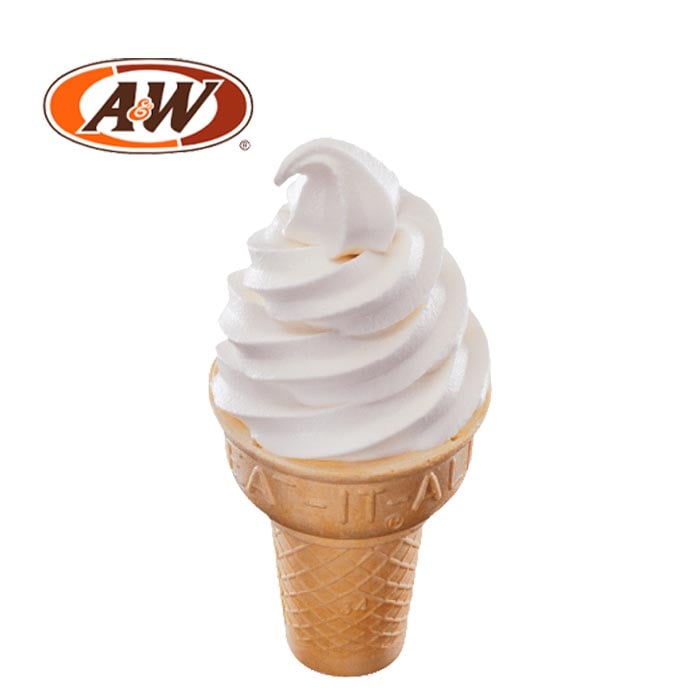 Once I got through all the national chains that offer soft serve vanilla ice cream cones (as far as I could tell), I needed to use my best judgment to choose some other restaurants that are widely known.

Depending on where you are in the country, you may not have an A&W near you, but they are plentiful here in the Midwest! At A&W, you also have the option to go with chocolate, a twist of vanilla & chocolate, or ditch the cone and go with a simple cup of ice cream instead. 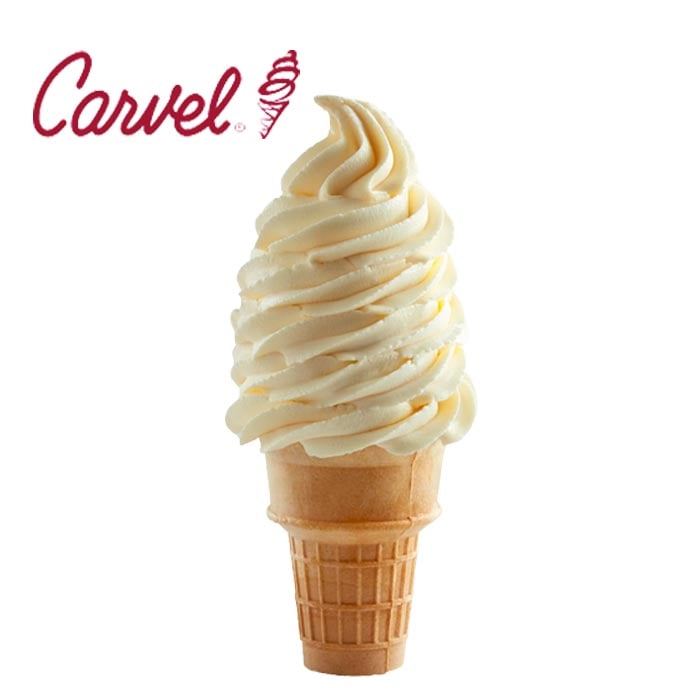 Cavel has a reduced-calorie ice cream called “Carvelite,” which I personally love. Carvelite has all the amazing flavor of their original vanilla ice cream (in my opinion you can’t taste any difference), but with much lower fat and calories than their standard ice cream.

Since this is light ice cream, you might think that the calories would be amongst the lowest here. Well, looks can be a bit deceiving!

A small ice cream cone from Carvel is going to be a slightly larger serving than you’d find at Burger King or McDonald’s, which is why you’ll see the calories being higher. 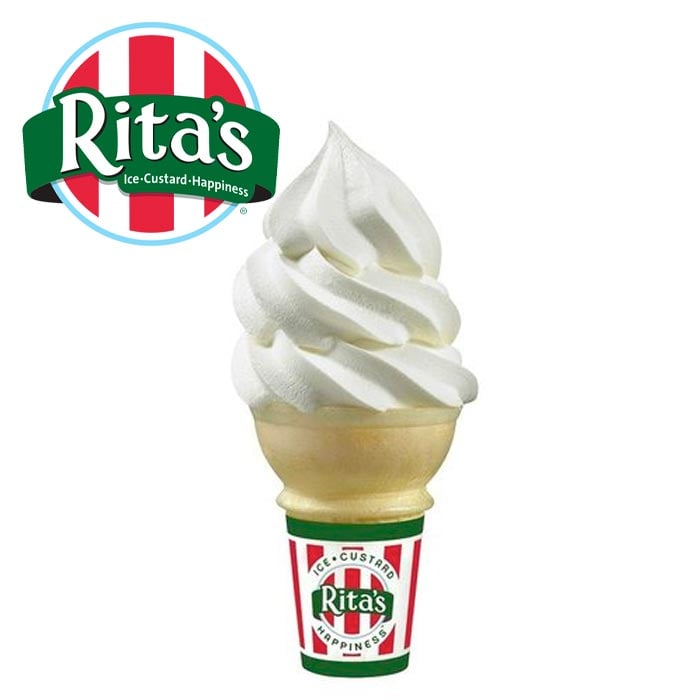 Rita’s is another chain that is spread throughout the country, but everybody may not have heard of it because it is heavily concentrated in the Northeast (where I grew up). Rita’s is best known for their ices, but they offer vanilla custard as well, which is what you’ll find in this small vanilla cone.

If you’re unfamiliar with custard, it is basically a slightly richer version of ice cream. Both ice cream and custard must contain at least 10 percent milkfat to be considered ice cream, but custard has more than 1.4% egg yolk as well (ice cream has any amount less than that). The additional egg yolk makes custard creamier, but also results in higher calories and fat, which is reflected in this cone. 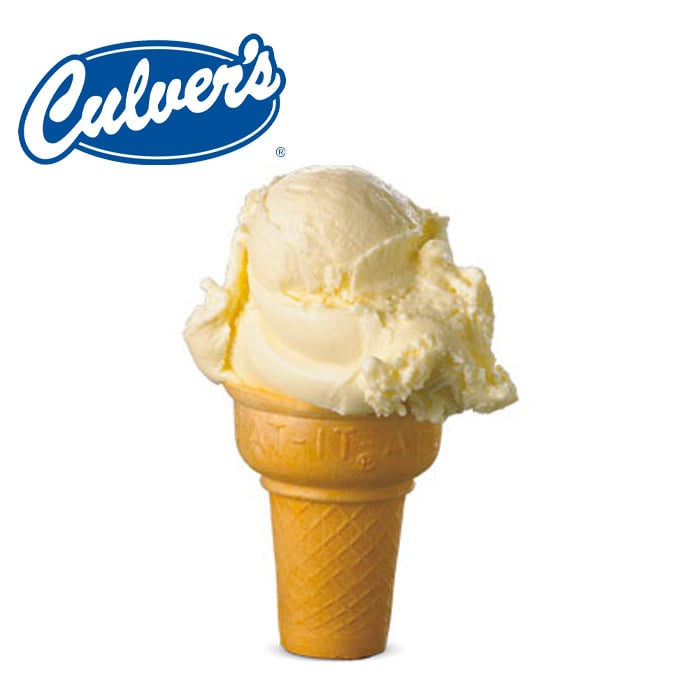 Culver’s has some of the best frozen custard you’ll find, and it looks a bit different from other options on this list because it is served as scoops and not as soft serve ice cream.

Custard is very similar to ice cream, but contains a greater amount of egg yolk, which leads to a very rich & creamy texture. The result, as you can see here, is product that is much higher in fat overall. 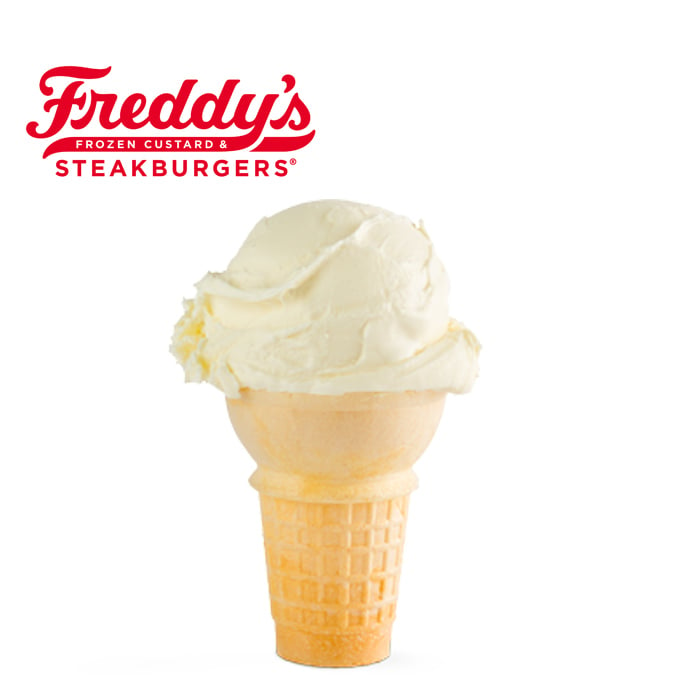 Ask anyone who has has frozen custard from Freddy’s, and they’ll be quick to tell you that it’s some of the best they’ve ever had.

Freddy’s rich frozen custard is the highest-calorie option on our list, with a small cone (single scoop) containing 370 calories. If you go with a double scoop, it’ll end up being 700 calories!

I don’t know how that math checks out… but I don’t make the rules, I just read the nutrition facts from their website.

Estimating ice cream calories if there is no nutritional information available

If you’re going to a local spot for some delicious vanilla ice cream, odds are that they are not going to have nutritional information readily available (unless you’re in an area, like NYC, where providing that information is required).

When that’s the case, what do you do?

Here’s what I like to do: take 2 comparable food options from national chains that offer nutritional information, then use those 2 to find the average. 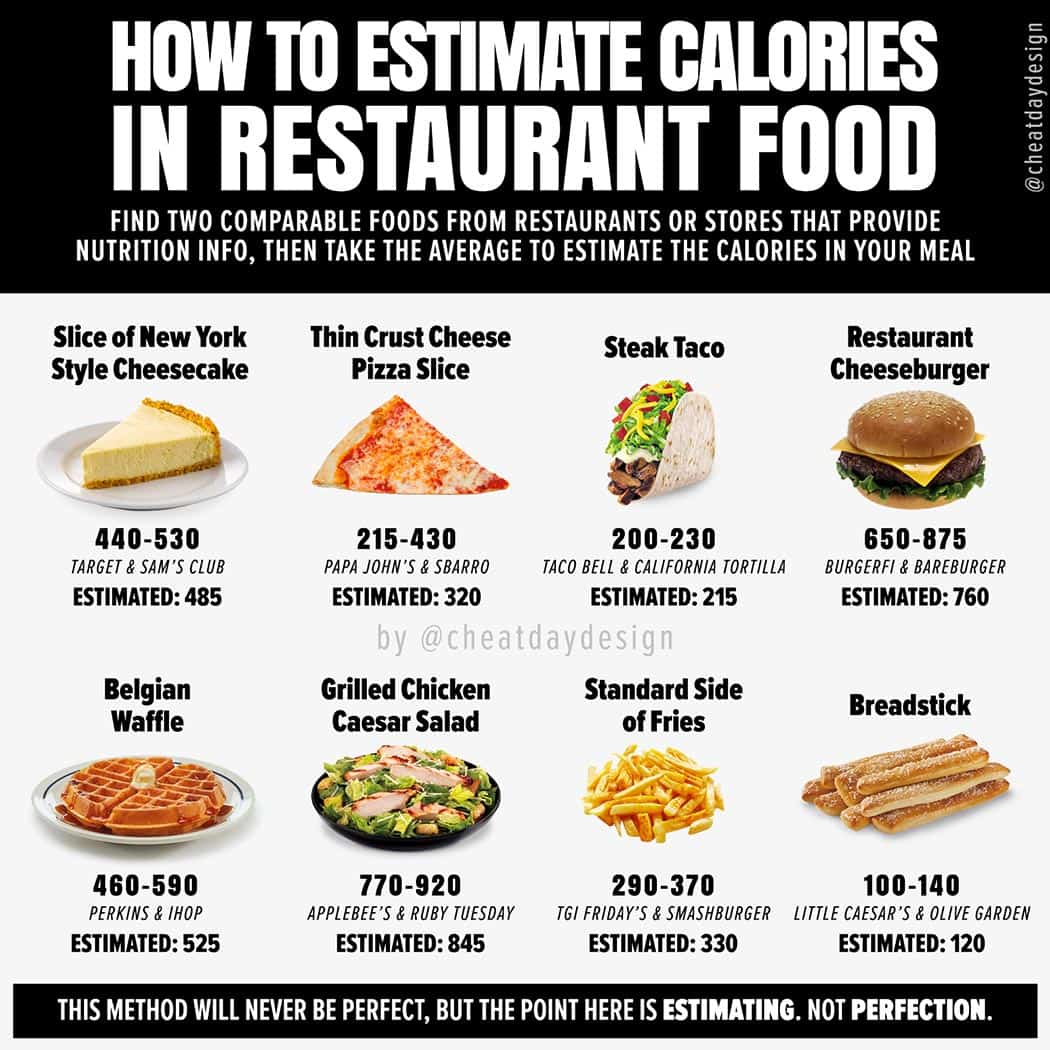 When you find 2 comparable options, it gives you a range to work with and find the average of.

For our purposes, let’s take the lowest calorie vanilla ice cream cone, along with the highest: Burger King and Rita’s.

140 calories and 285 calories is quite the large range, but that’s okay! Let’s split the difference, which gives us roughly 215 calories.

Based on the other ice cream cones we looked at, 215 calories is very reasonable for an estimate, so we’ll assume that is what your cone has.

Will this always work? Of course not!

Your cone may have 150 calories, or it may have 350 calories. We really have no way of knowing, but that’s why it’s called ESTIMATING!

215 calories may not be accurate, but it’s much better than making a blind guess.

Can you eat soft serve ice cream as part of a healthy diet?

Let me remind you of this: it is okay to eat food because it tastes good. 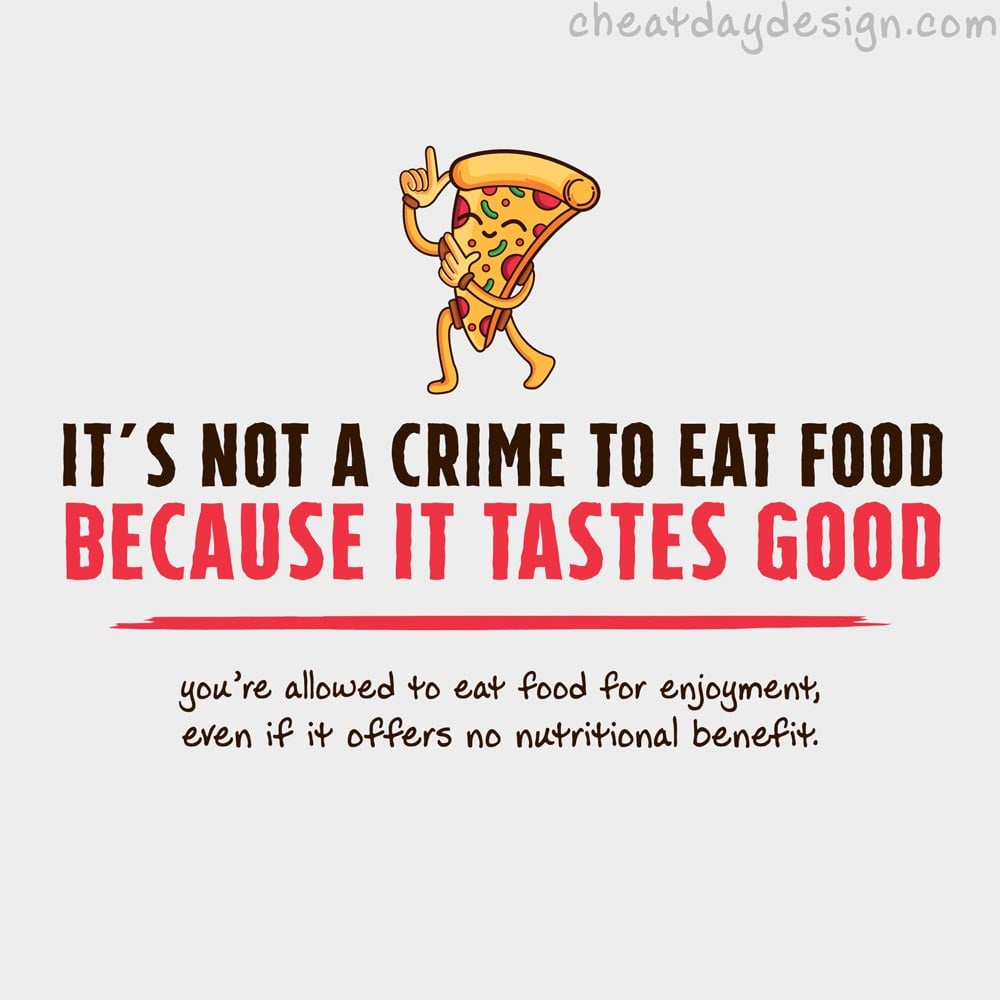 Every food choice you make does not need to be in the pursuit of perfect health.

Ice cream may not be your typical “healthy” dessert (unless you make your own) but that doesn’t mean it’s bad to enjoy it.

If you love ice cream, I hope you can allow yourself to enjoy it!