If your goal is healthy eating on the go, Chick-fil-A can be a great option overall.

As the name implies, the entire Chick fil a menu is based around chicken, which is generally a low-calorie and high protein food.

Sure, things change a bit when that chicken is fried, but it is generally a more appealing option vs something like a burger & fries from McDonald’s.

Of course, not all chicken is created equally. At KFC, for example, that bucket of Famous fried chicken is not going to be quite as favorable as a grilled chicken sandwich.

But, overall, Chick-fil-A has some great options worth exploring, so let’s get into it.

Which Chick-fil-A items are the healthiest? 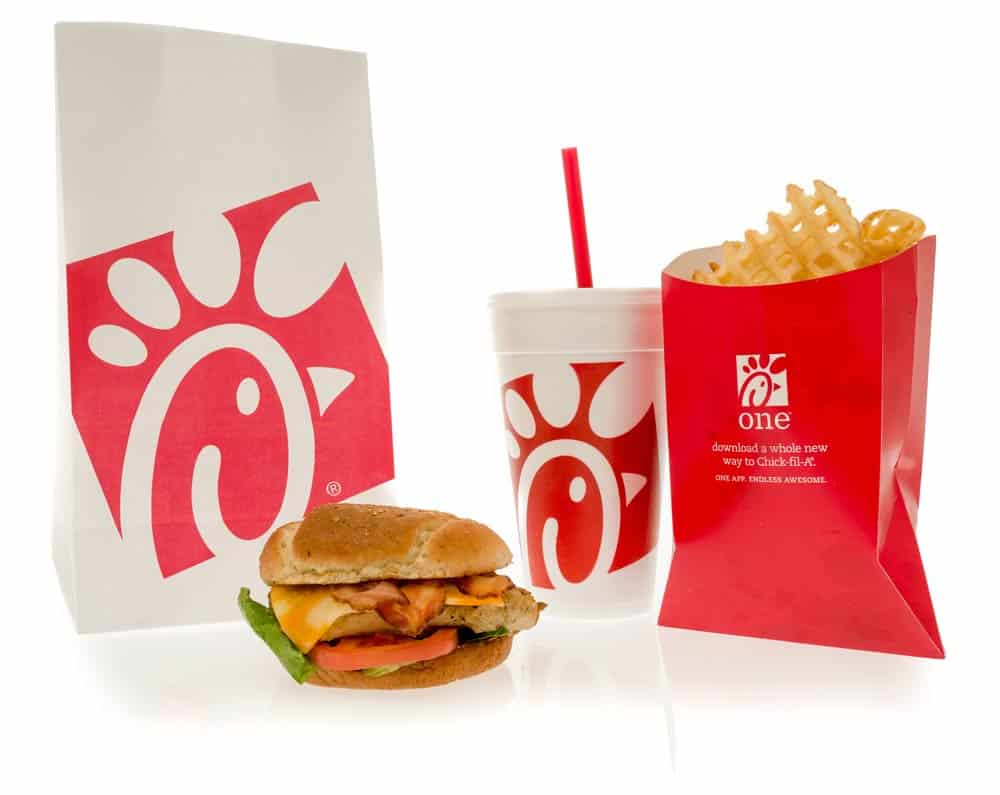 Let me preface this by saying that there’s no right or wrong answer to what “healthy” means.

To you, healthy might be lower calorie, and to someone else, it might mean lower-fat or low in carbs. It’s very subjective!

That being said, we can look at the menu and make selections based on our specific goals, so let’s break down the Chick fil A menu to find some of the best options. 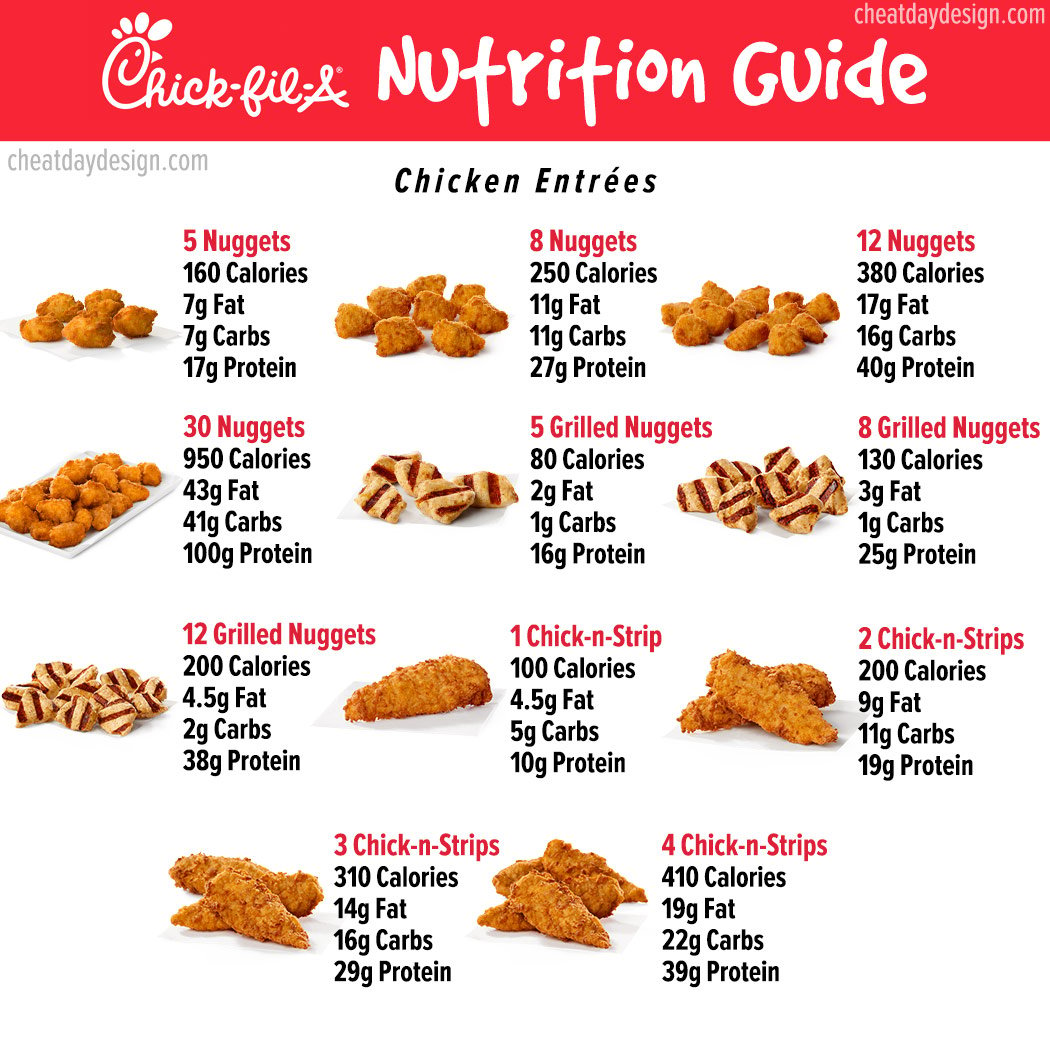 When it comes to ordering chicken, you have three different options:

If you’re looking to maximize your protein at Chick-fil-A, then these are most definitely your best options on the Chick fil A menu.

If you’re keto, or simply looking to limit your carbs, the Grilled Chicken Nuggets are going to be the best bet (you can find more keto-friendly options over at The Diet Chef).

The grilled chicken nuggets are made from lean white-meat chicken breast, making them a low-calorie, high-protein option.

While the Chick fil a® nuggets are made from the same lean chicken, the breading and method of frying add many extra calories in the form of fat and carbohydrates.

This is not necessarily a bad thing, but if your goal is to keep your calories low, opting for the grilled chicken will cut those calories in half.

And don’t worry about saturated fat, if that is a concern for your diet. Even the fried chicken nuggets only have 2.5g total saturated fat (for an 8 piece) so they are both quality options for you.

When it comes to either of these options, you’re likely not eating them plain. I mean, Chick-fil-A is partly known for its delicious dipping sauces… 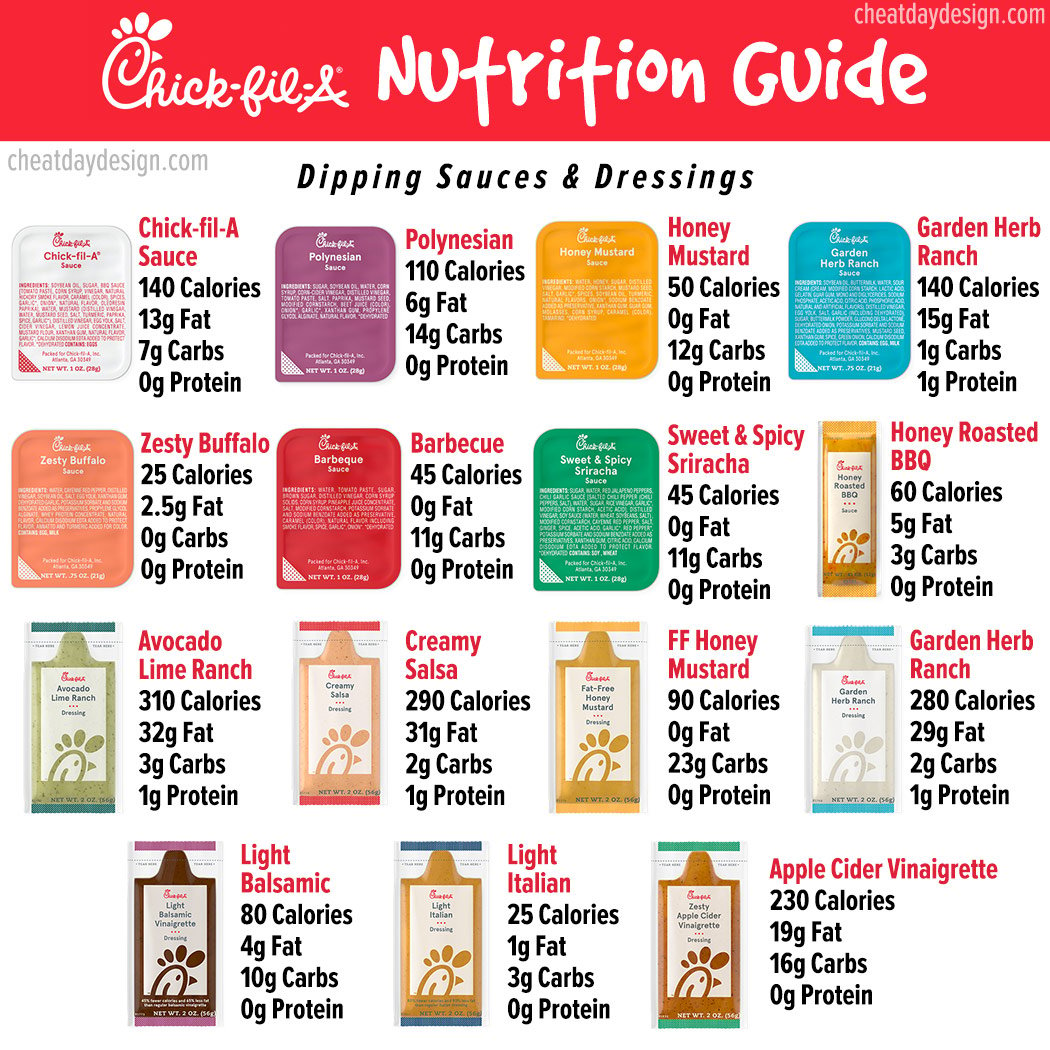 Since the packets of dipping sauces are pretty small, it’s likely that you’re going to want more than one. While that may not be an issue, it’s clear to see that those extra calories can really add up.

If you have 2 sides of Zesty Buffalo Sauce or Honey Mustard, you’ll only be consuming an extra 100 calories or less.

But if you go for the Chick-fil-A sauce or Ranch, you’ll be adding nearly 300 extra calories to your meal, so it’s wise to be mindful of how much sauce you’re using.

Looking at the salad dressing, Chick-fil-A conveniently offers “light” dressing options; at less than 100 calories per packet (and as low as 25 calories for the Light Italian Dressing), the light options will add a ton of flavor to your salads without adding a ton of calories.

Most of the other options are thicker & creamier, leading to a lot more calories.

Luckily, Chick-fil-A salads will be served with the dressing on the side, so you have the luxury of using as much or as little as you’d like. 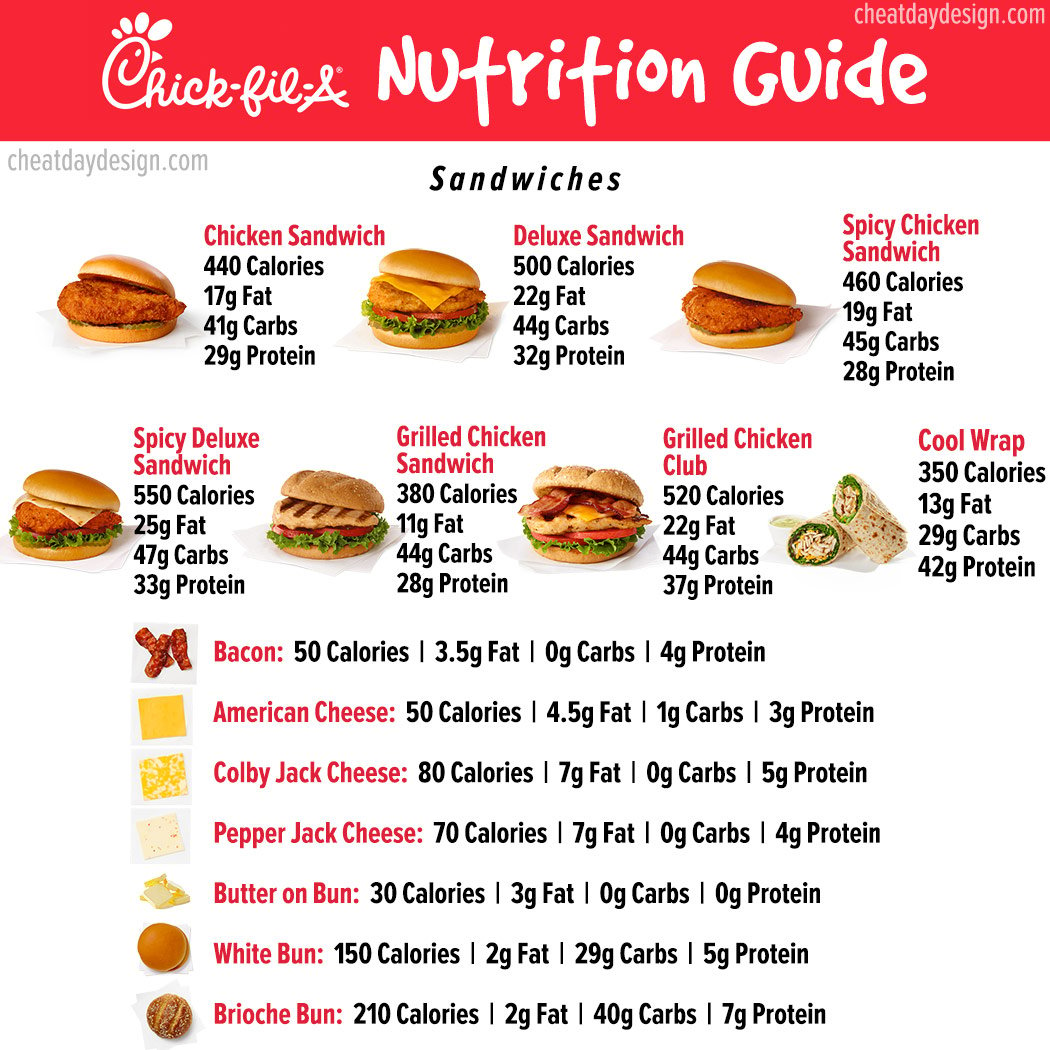 While the chicken sandwich menu at Chick-fil-A isn’t huge, the customizations are nearly endless.

All of the sandwiches listed in this graphic are exactly as pictured, but don’t include any sauces. For example, The Deluxe Sandwich includes American cheese and butter on the bun. If you wanted to leave both of those out, you can see from this nutrition guide that you’d be saving 80 calories! 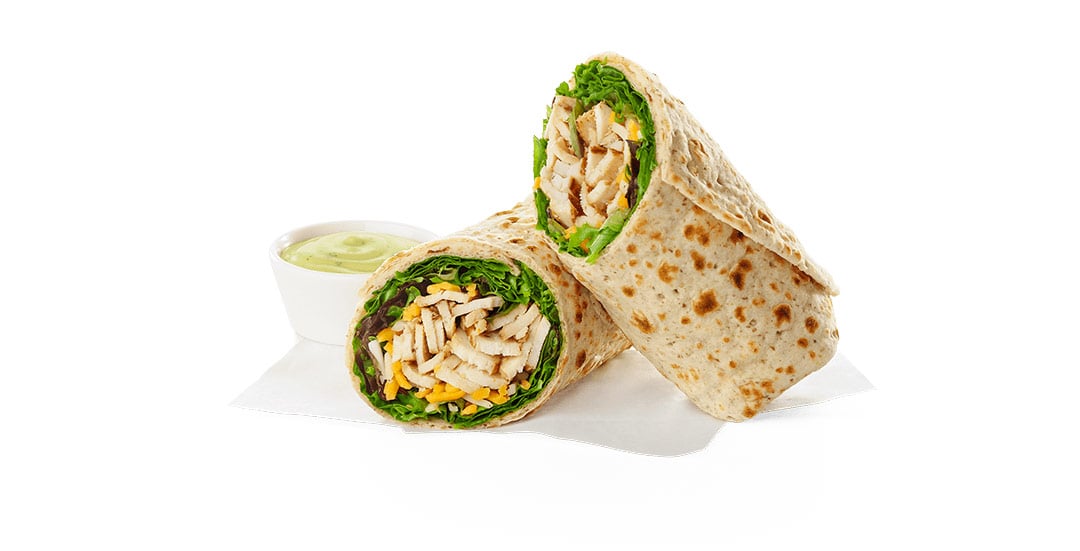 The Grilled Chicken Cool Wrap is a great option if you want to keep your calories low while still enjoying something other than nuggets. Be mindful, however, that this wrap is served with Avocado Lime Ranch Dressing, which adds over 300 calories, so use it sparingly.

If a wrap doesn’t cut it and you want an actual sandwich, the grilled chicken sandwich has only 380 calories with 28g of protein, making it a great option. 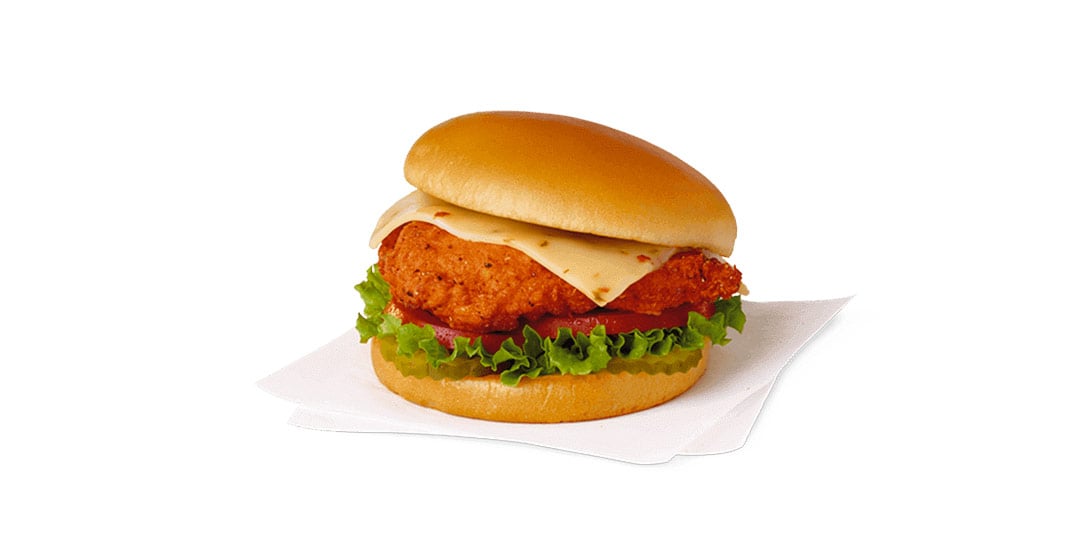 It’s shocking to me that the highest calorie menu item at Chick-fil-A is only 550 calories. That’s quite different from some of the higher-calorie options you’ll find at Burger King, Wendy’s, McDonald’s, and others.

Sure, this Spicy Deluxe Sandwich is technically the highest calorie option, but quite honestly, it’s still a great option! 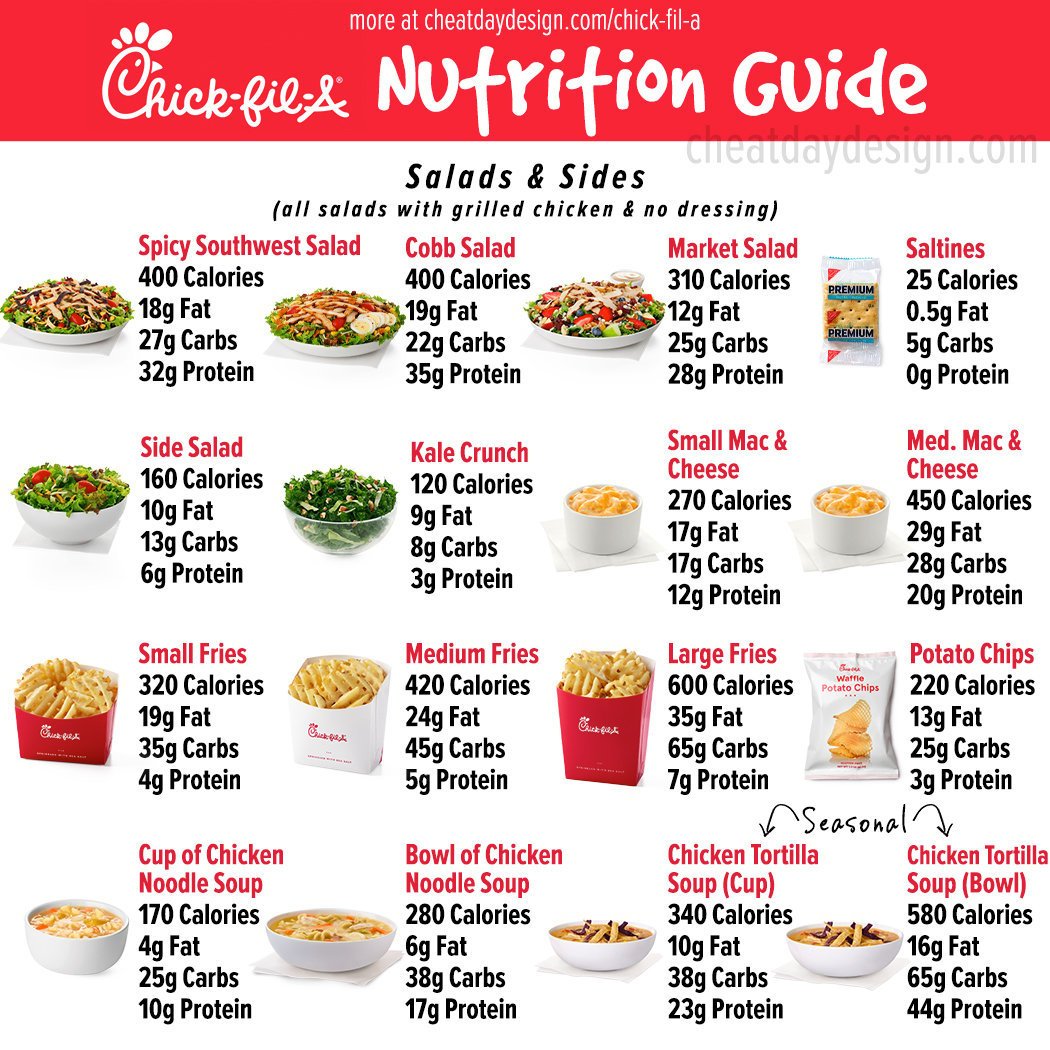 For this guide, I chose to display the nutrition for salads topped with grilled chicken. How does the nutrition change for different types of chicken?

Let’s use the Grilled Market Salad as an example to find out how it changes when you swap out the chicken:

As you can see, the calories vary quite a bit. The sliced grilled chicken breast will only add 100 calories, where something like chicken strips will add 300 calories! Keep that in mind if you’re trying to keep your salad low calorie.

Remember, the salads listed here do not include the dressing. They do include all the other mix-ins, like hard-boiled egg in the cobb salad, or the tortilla strips in the spicy southwest salad.

If you want to see how many calories the dressing will add to your salad, be sure to reference the dipping sauce & dressing guide above.

When it comes to sides at Chick fil A, if you do not want a salad, the most popular option is the waffle fries. While you surely are not ordering fries for the health benefits, at only about 300 calories for a small side of fries, you could do much worse. 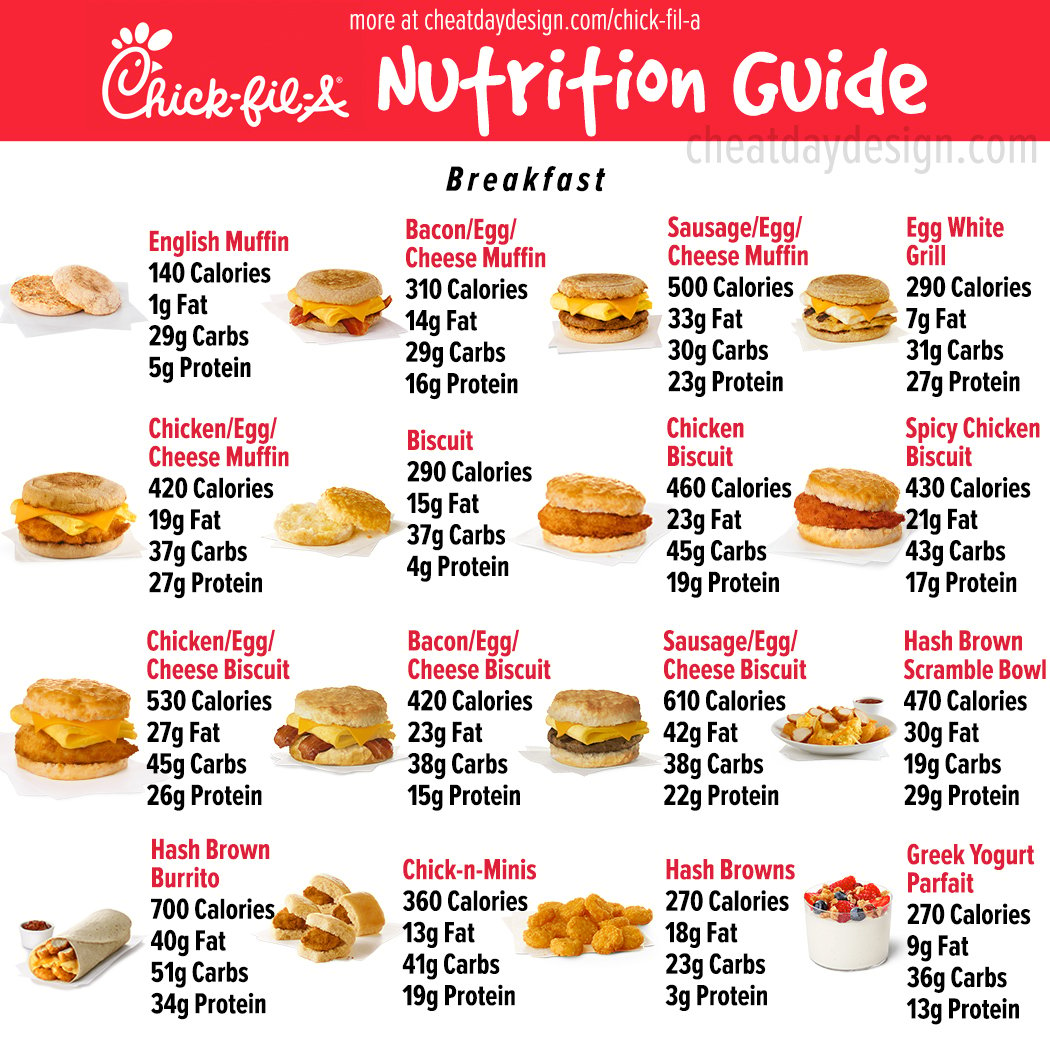 Ah, breakfast: the best meal of the day.

Like the Chick-fil-A chicken sandwiches, Chick fil A breakfast has a ton of room for customization.

Let’s say that you are in the mood for a bacon egg & cheese sandwich. You can see in the nutrition guide above that you have two options: a biscuit and an English muffin.

But the options certainly do not end there. You can order a breakfast sandwich with chicken, swap out the eggs for egg whites, get extra bacon, or swap out the American cheese for a different type of cheese.

If you’re ordering everything as-is, you can see that the most bang for your buck (bucks meaning calories, in this case) is the Egg White Grill. 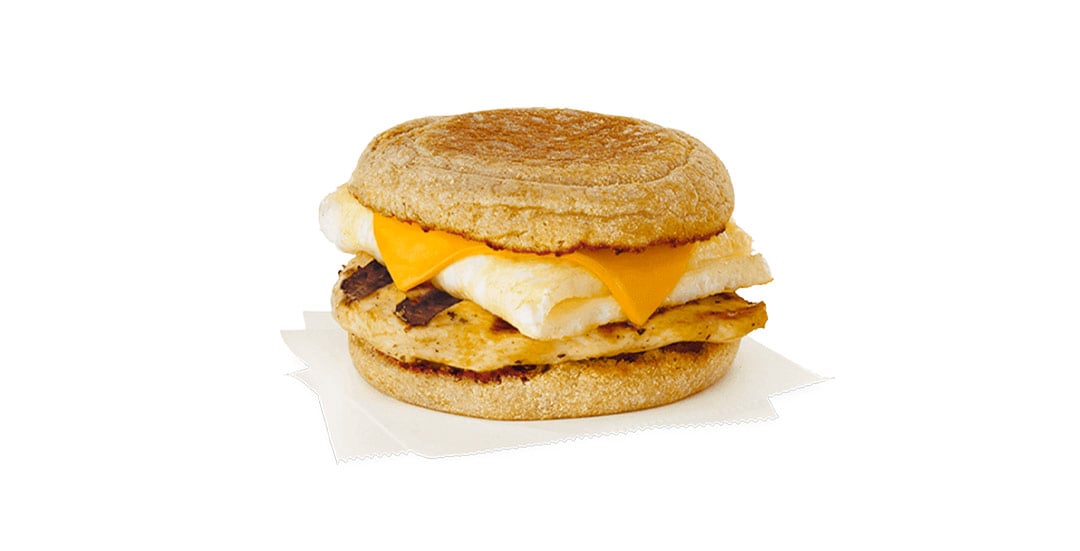 If you want to keep the calories low and the protein high, the Egg White Grill is a great option for breakfast. It has grilled chicken, egg whites, and American cheese on a English muffin.

If you want to pair it with a low-calorie side, you can add a fruit cup for an additional 60 calories. 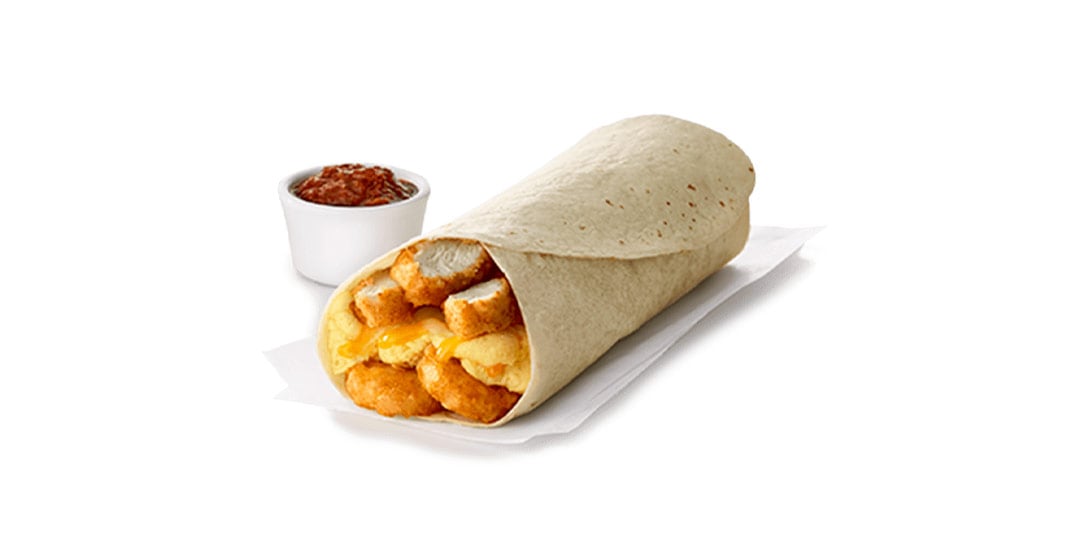 The breakfast burrito will provide the most calories at 700 total. This burrito not only contains eggs and monterey jack cheese, but also contains nuggets and crispy hash browns.

You have the option of ordering this same burrito without hash browns, and swapping the nuggets for a grilled filet, which will bring the total calories all the way down to 500. 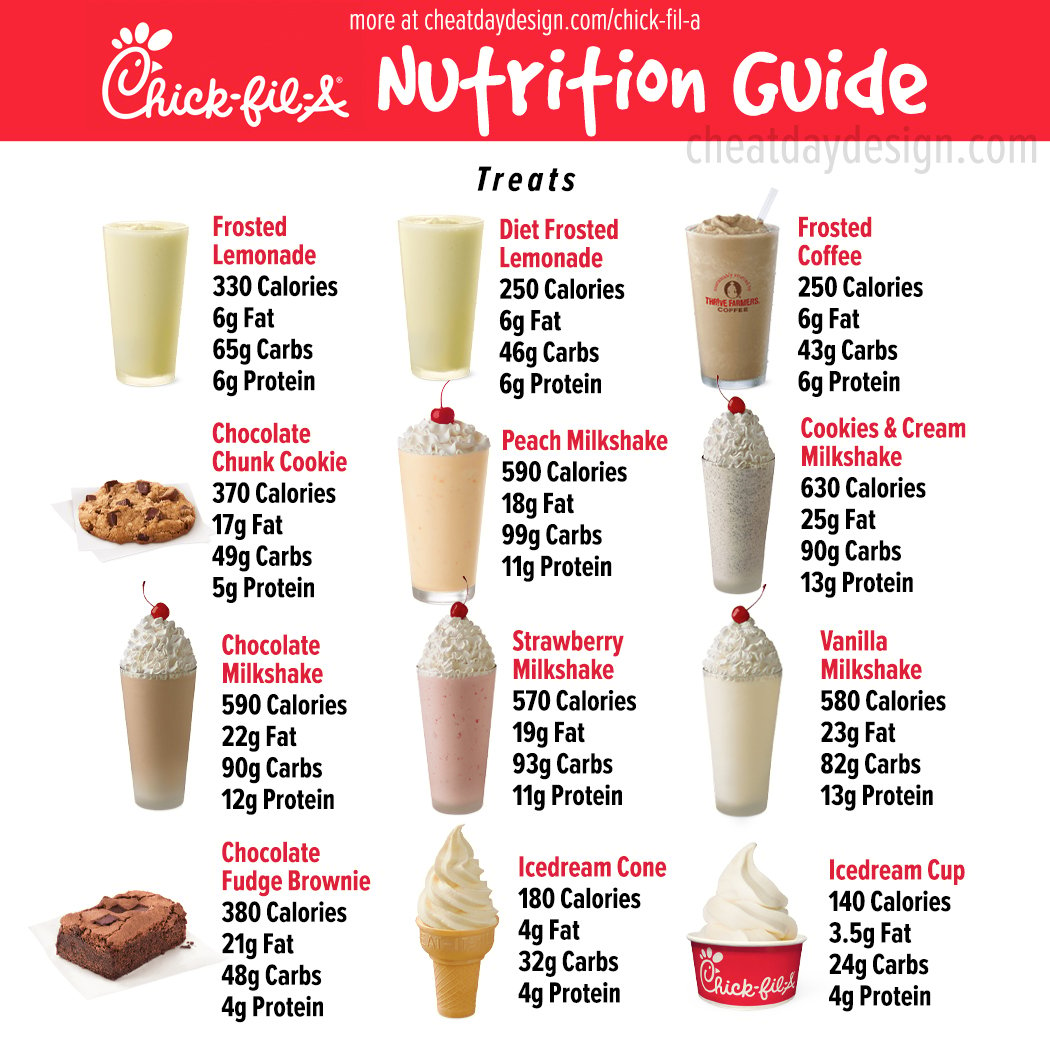 No meal is complete without some dessert, right?

Since these menu items are all treats, we won’t spend too much time talking about the nutrition here, but the “Icedream” is worth drawing attention to.

If you’re in the mood for a vanilla ice cream cone, Chick-fil-A actually offers one of the lowest-calorie options out there! The same cone at McDonald’s or Burger King will be 200 calories, so you’ll be getting slightly fewer calories at Chick-fil-A (and more delicious ice cream, in my opinion).

Where Chick-fil-A differs from other fast food restaurants is offering their soft serve ice cream in a cup. If you want to save some calories by skipping the cone (or you’re planning on sharing a pup cup with your dog) then you have the option here.

How to save calories at Chick-fil-A 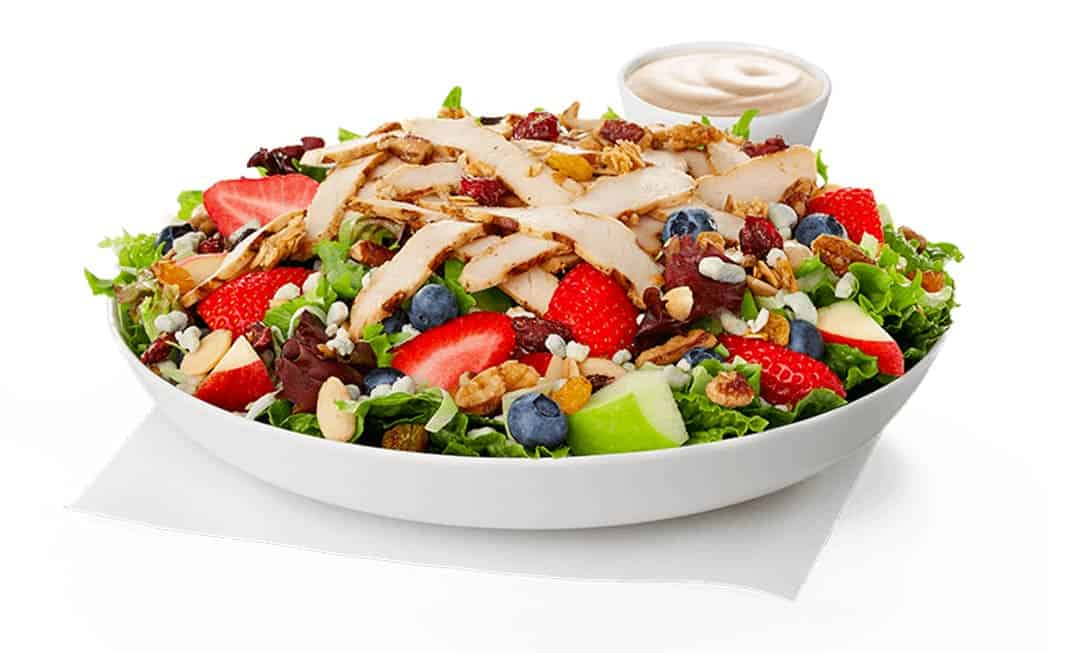 When it comes to eating out at restaurants, not just Chick-fil-A, substitutions are your friend. Depending on the substitutions you make, you can easily save yourself 100’s of calories without sacrificing any flavor at all.

If you’re looking to save some calories, going cheese-less can be a great place to start. If you order the Grilled Chicken Bacon Club without cheese, that brings the entire sandwich down to 430 calories! Not bad at all.

The Chick-fil-A nutrition here does not include sauces on the sandwiches. We all know Chick-fil-A dipping sauce is a must, but be mindful of which you are choosing. While the Zesty Buffalo Sauce is only 25 calories, the famous Chick-fil-A sauce is 140 calories!

If you definitely want to use sauce, just try to limit yourself to one. Sure, you can use more than that, but those calories will add up quickly.

Calorie-saver #3: Ask for no butter

The nutrition for some of these sandwiches do include butter on the bun. While that makes the sandwiches even more delicious, it also adds an extra 30 calories.

Is 30 calories a lot? Nope, certainly not! I would not stress it. But if you do want to save a few calories, ask them to leave that butter off.

Calorie-saver #4: Don’t be afraid of substitutions

I mentioned it many times above, but don’t be afraid to ask for substitutions and make changes to an order.

Chick-fil-A salads include lots of mix-ins, so that is where the calories are coming from. For example, the market salad has a bunch of fruit, blue cheese, and granola included, so it can add up.

Get creative with the salad and leave the granola out, or swap out a different kind of dressing. If you want to up the protein, add some Grilled Chicken Nuggets on top!

When it comes to sandwiches, you can swap out the type of cheese or the type of chicken, or you can change up the bun. There are tons of options, so find what works best for not only your goal but your tastebuds as well.

Is Chick Fil A healthy? 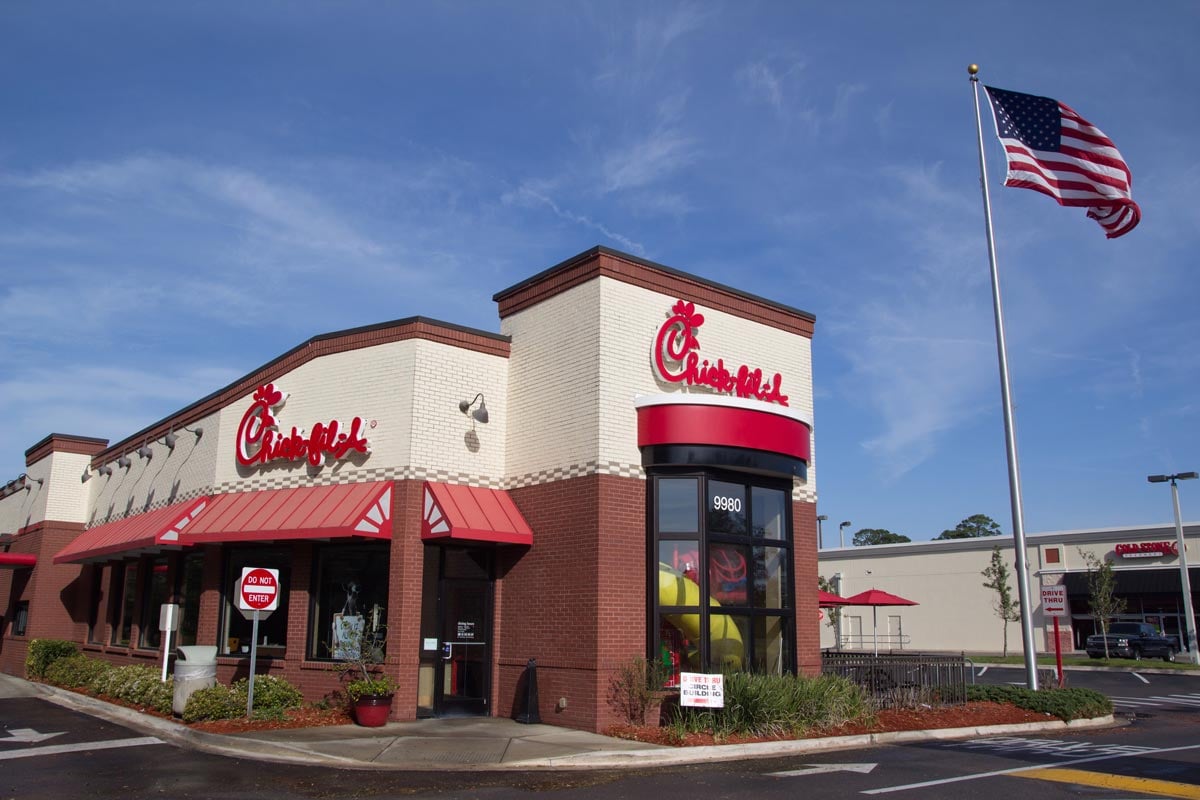 When it comes to fast food, you could do much worse than Chick-fil-a. Sure, all items aren’t going to be ideal for you depending on your goals, but the fact that the highest calorie menu item clocks in at only 550 calories, there are plenty of solid options here to fit your goals.

If you ever want to see how Chick-fil-A stacks up against other fast food options, check out how their fried chicken sandwich compares to others on the market (in the infamous Chicken Sandwich Wars) or how their waffle fries stack up against the competition.

And if you’re ever craving a delicious fried chicken sandwich and don’t feel like going out of your way to visit a Chick-fil-A, I highly recommend you check out my Crispy Chicken Sandwich Recipe. 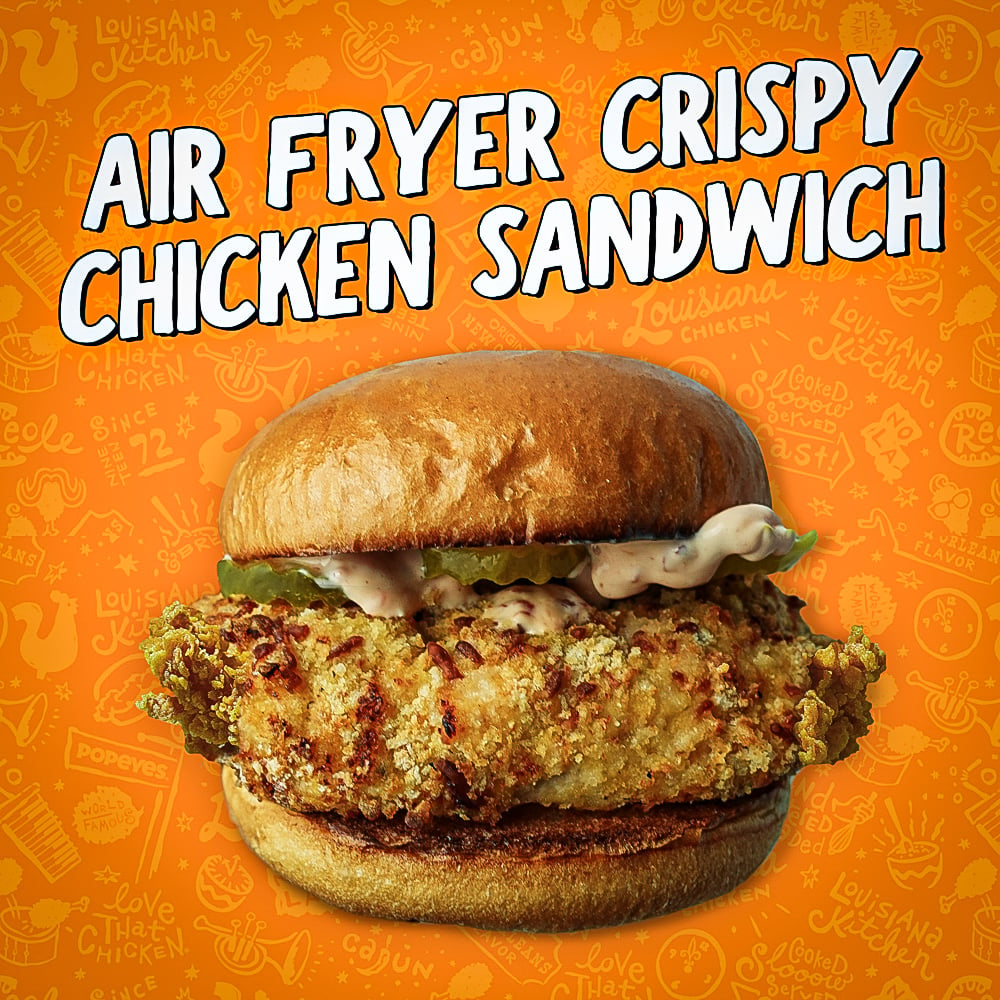 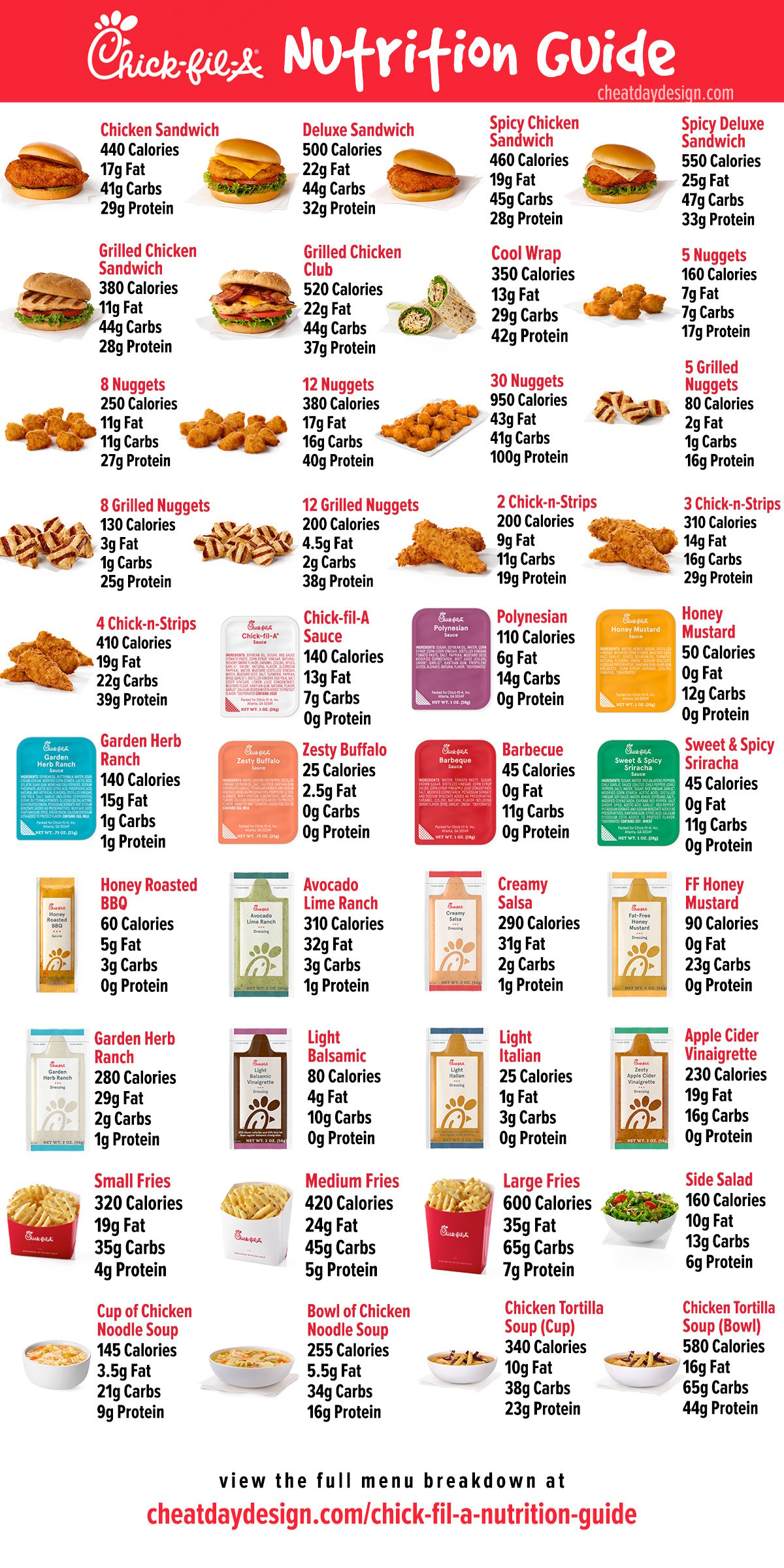