“Why does anybody in the world ever eat anything but breakfast food?” … “People are idiots, Ron.”

Parks & Rec said it best. Breakfast food is the ONLY food.

If breakfast food isn’t your favorite kind of food, I feel for you. But if you love breakfast as much as I do, then you’d rather not skip eating due to a lack of time in the morning!

So, here are some lower-calorie options for you to explore when you’re on the go. 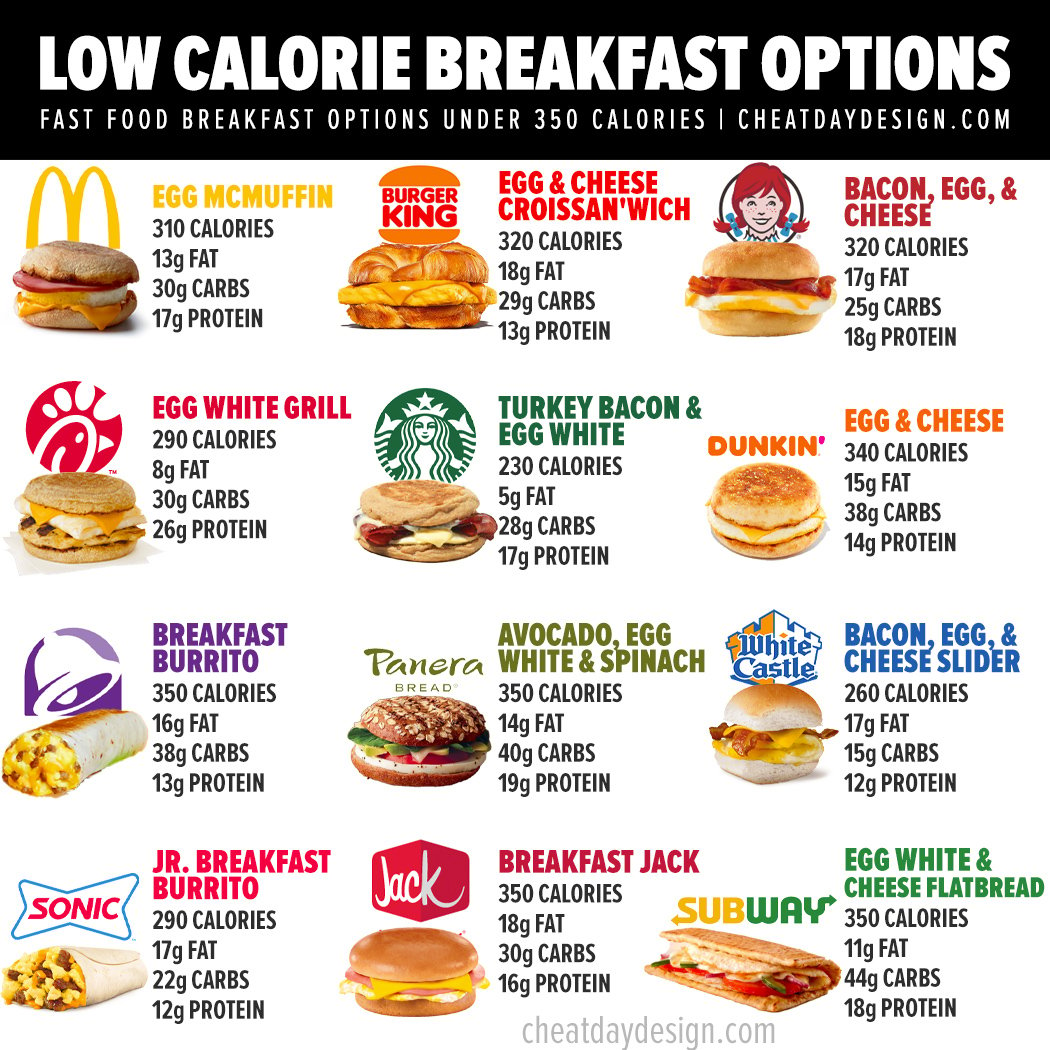 Note that these sandwiches are not necessarily the LOWEST calorie option on each menu, but they are all under 350 calories, which is sure to fit into anyone’s diet.

I wanted to compare similar breakfast options that you can eat on the go- whether you’re embarking on a road trip, heading into work, or just like to eat with your hands, these are all options you can grab & go.

A lot of fast food restaurants will have other options like fruit, yogurt, smoothies, etc, that might be even lower in calories, but we’re comparing sandwiches/wraps here for the ease of comparison.

Bacon egg & cheese is not the only option for breakfast sandwiches, but it’s definitely the most common option here in the US. Most of these sandwiches have some combination of these, as long as they fit under the 350 calorie limit.

Can you make substitutions to fast food breakfast sandwiches?

Just a quick shameless plug for my Brioche French Toast Breakfast Sandwiches, because they deserve the attention.

The short answer: yes, in most cases!

The longer answer: it depends on where you are, and what you’d like to swap.

For example, most places you go will have egg white options on their menu (although that’s not always going to be the case). Because of this, you can typically substitute eggs for egg whites, even if it’s not on the menu.

If you head to Dunkin’ and you want to grab yourself a bacon, egg, and cheese bagel, you can save yourself some calories by getting egg whites instead.

If egg whites are offered anywhere on a restaurant menu, it’s typically a swap that can easily be made for you.

Another thing you can do to save some calories is to leave off the cheese. Fast food restaurants are not going to be using low-calorie or low-fat cheeses, so leaving the cheese off your sandwich can save you anywhere from 50-100 calories!

Of course, what’s a breakfast sandwich without cheese? It definitely takes away some of the flavor, but will work if you’re looking to save yourself calories!

For this guide, we’re looking at options that are 350 calories or less.

I am by no means implying that you need to consume under 350 calories per meal- far from it, actually. Personally, my breakfast is typically 700-800 calories.

But if you’re aiming to be in a calorie deficit, you want to keep your calories low without sacrificing taste, so these are all great options to allow you to do exactly that. 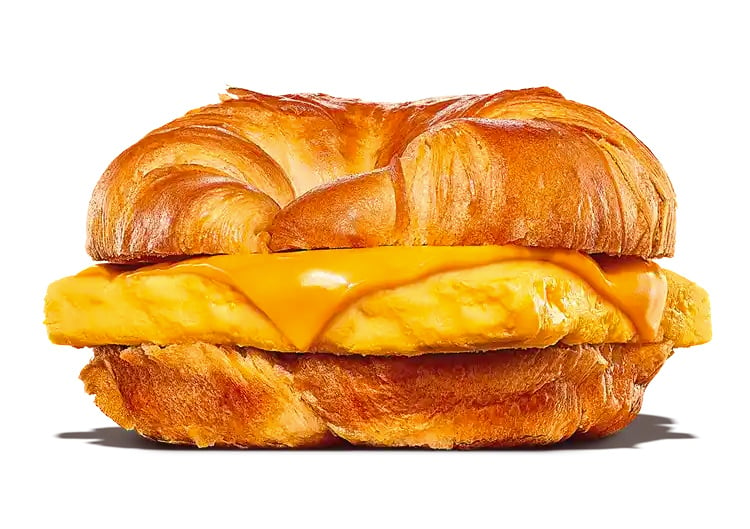 Burger King also offers the option to order breakfast sandwiches on biscuits, with the lowest calorie option being the Egg and Cheese Biscuit with 370 calories. Overall, it’s a very similar sandwich to the croissant version, but the biscuit itself adds some extra calories. 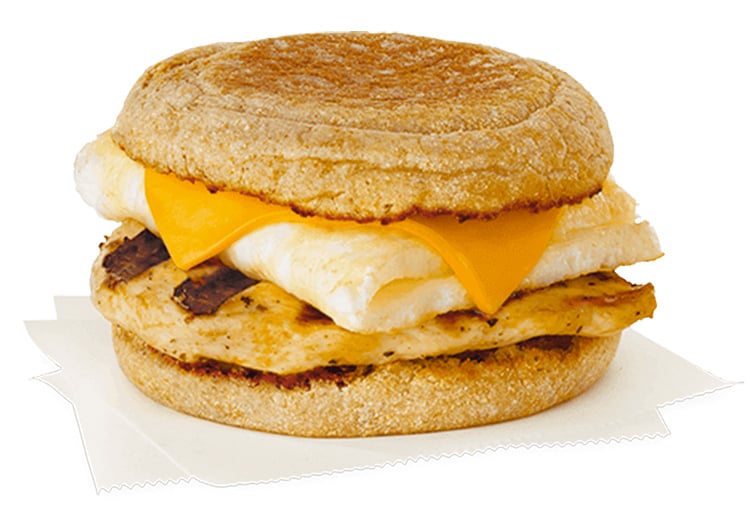 When it comes to low-calorie breakfast, Chick-fil-A is one of the best options out there. The Egg White Grill is the highest-protein option you’ll find out there, but they have plenty of other great options, too.

You can find my full Chick-fil-A menu nutrition guide here. 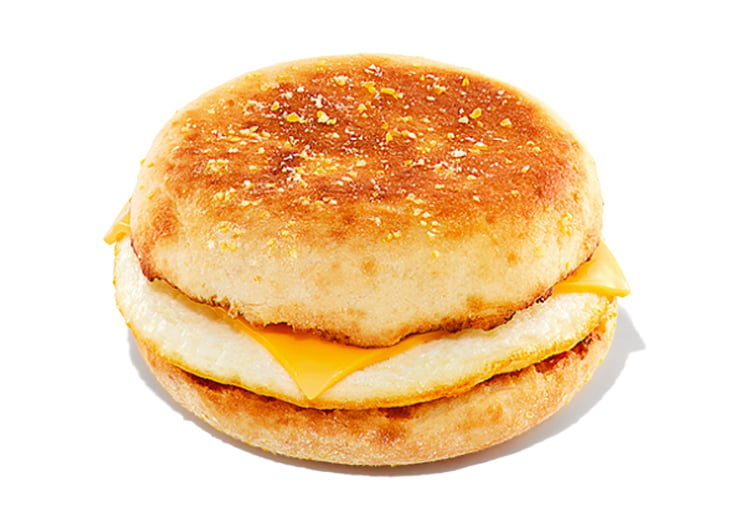 Dunkin’ used to offer more egg white options, but they are not currently on the menu. If you’re looking for a low-calorie breakfast sandwich, the egg & cheese muffin is your best bet! If you order the same sandwich on a bagel or croissant, this same sandwich will be 460 and 500 calories, respectively.

Another great low-calorie option at Dunkin is the Wake Up Wrap, which will contain anywhere from 180-290 calories per wrap, depending on the type of meat you choose. 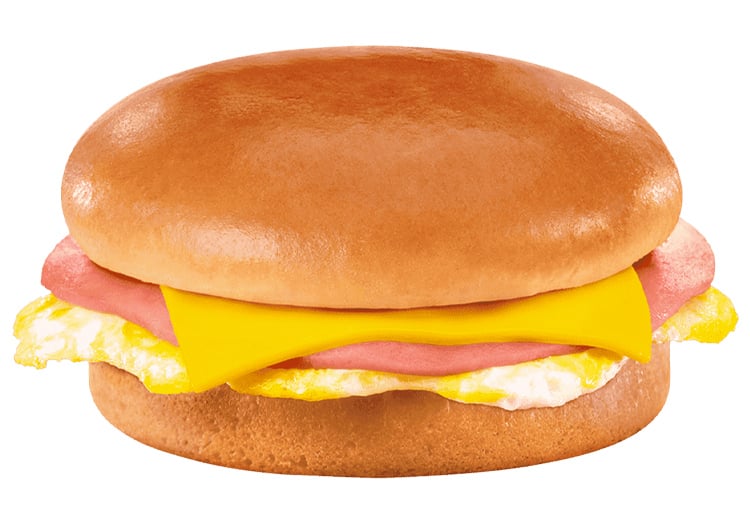 Jack in the Box has a wide variety of breakfast sandwich options, but none of them are particularly low calorie.

The “Breakfast Jack” sandwich is the lowest calorie option with exactly 350 calories. This sandwich contains ham, egg, and cheese on a roll. If you prefer bacon, you can order a Breakfast Jack with bacon instead of ham, and it will only bump the calories up slightly to 380 total. 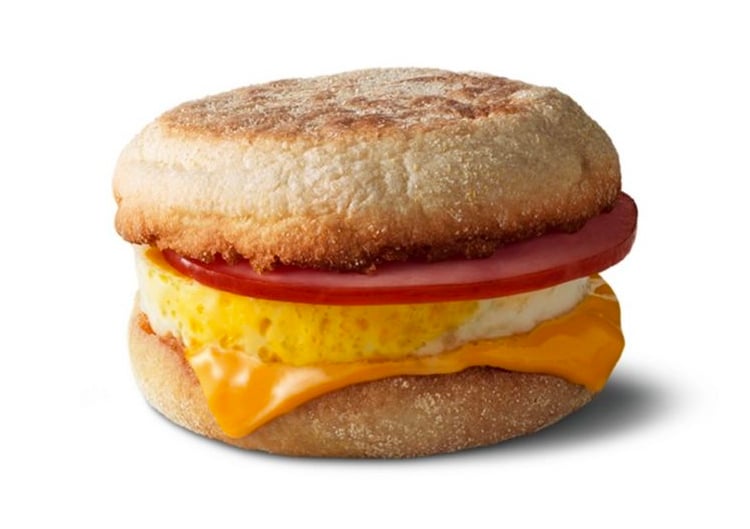 I’m old enough to remember when McDonald’s offered an Egg White Delight McMuffin, which was a mere 250 calories. Sadly, the egg white delight option was discontinued, but the Egg McMuffin is still a great low-calorie option.

If eggs aren’t your thing, you can get a Sausage McMuffin for 400 calories, but those are your only 400 calories (or less) options. 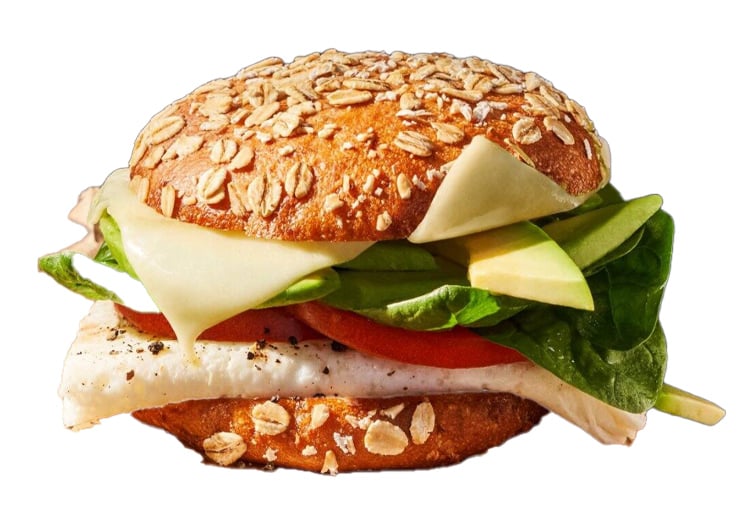 Panera has a wide range of breakfast sandwich options, and since they specialize in bread & bagels, there are tons of substitution options you can make. If you order as-is, the avocado, egg white, and spinach sandwich is the lowest-calorie option you can order at just 350 calories.

Here are some other great low-calorie options at Panera… 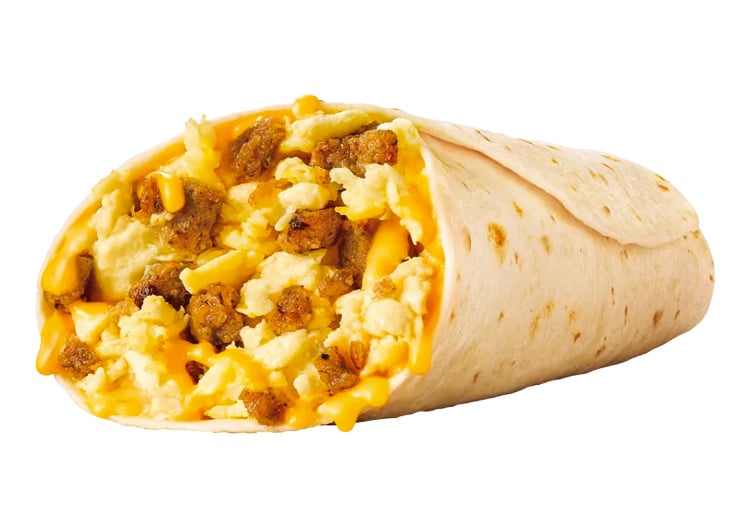 Sonic’s breakfast burrito packs fluffy eggs, sausage, and cheese, all for under 300 calories! If you order the same Jr. Breakfast Burrito with bacon, it will lower the calories even more, down to 270 calories.

Since this is a junior burrito, it is on the smaller side, but that’s the price you pay for a lower-calorie option. If you order the full-size breakfast burrito, it will be 470 calories, which is quite a large difference. 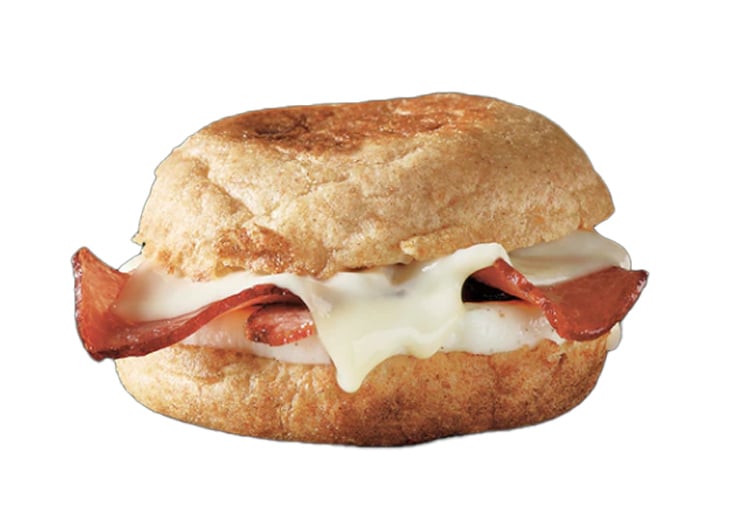 When you’re picking up your Starbucks coffee first thing in the morning, odds are that you’re going to want to pair that with some food, too.

This turkey bacon & egg white sandwich is the lowest calorie option you’ll find, with just 230 calories, and it contains quite a bit of protein for those low calories. Starbucks offers quite a few breakfast options (aside from their baked goods), and many of them are also low-calorie. 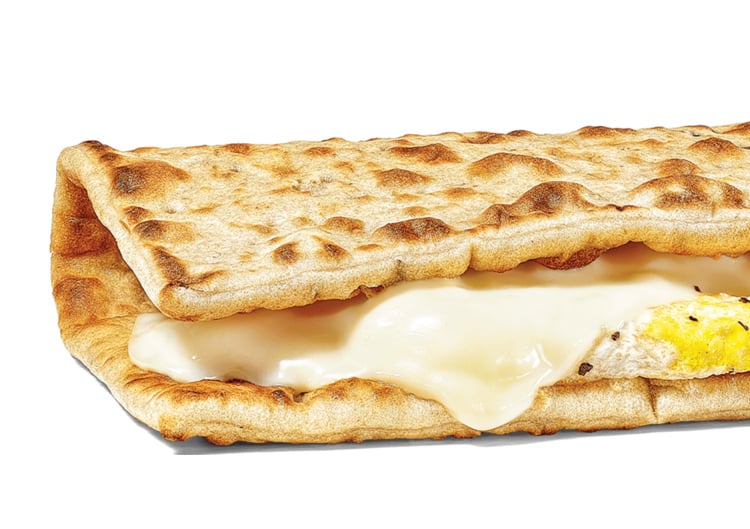 Subway’s breakfast menu is quite limited, with the only current options being breakfast flatbreads. The lowest-calorie breakfast option at Subway is actually the egg & cheese flatbread, which contains 450 calories. However, they offer the option to swap the eggs for egg whites, which brings the calories down to 350 calories total. 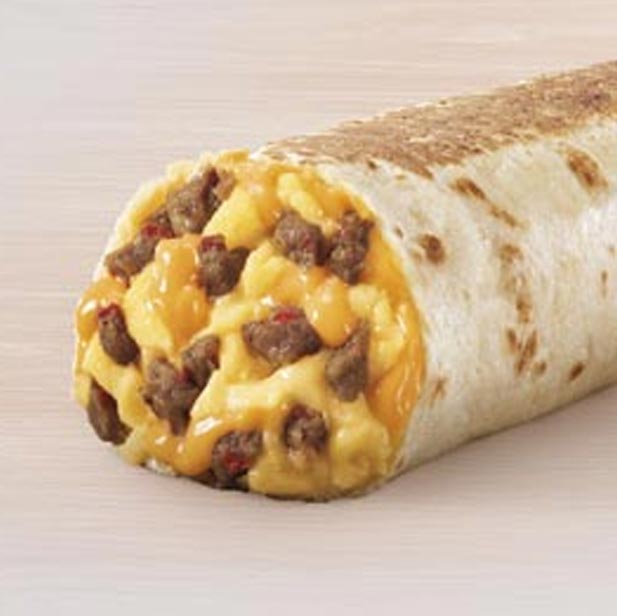 When people think of Taco Bell, they don’t typically think about breakfast. But Taco Bell has some surprisingly decent options!

While Taco Bell’s Grande Breakfast Burritos and Crunchwraps are higher in calories, the standard breakfast burritos are all solid choices.

The Cheesy Breakfast Burrito with either bacon or sausage contains 350 calories, and the vegetarian options with potato contains only 340 calories. 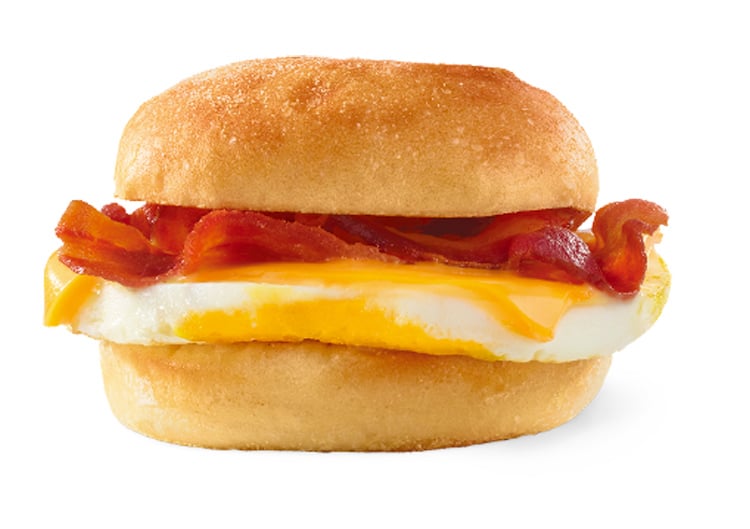 At only 320 calories, it’s a fantastic low-calorie breakfast option. The same bacon, egg, & cheese on a biscuit will be 420 calories, and the croissant will be 410 calories. All in all, those are all good options! 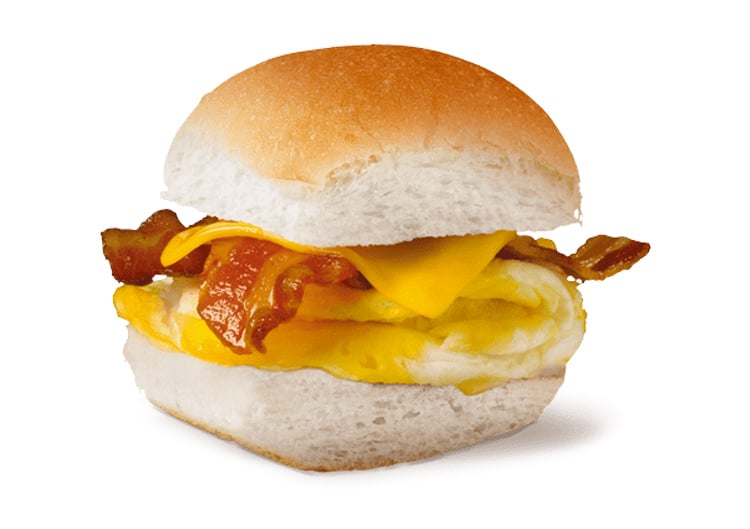 This White Castle breakfast option is low calorie because the portion is quite small, but it deserves to make this list. A slider is unlikely to fill you up for a full meal, but many other breakfast sandwiches out there are quite small, so you may be able to make it work!

White Castle also offers waffle breakfast sliders, which speaks directly to my heart. Surprisingly, the egg & cheese breakfast slider contains only 330 calories, and the bacon, egg, & cheese version is still only 390 calories. Not bad at all!

I’m in a constant battle trying to convince people to not be afraid of fast food.

Sure, the quality may not be quite as great as if you made your own sandwich at home, but you could do much worse.

In the past, these sandwiches would be pretty low quality in terms of ingredients, but these days, fast food restaurants have improved significantly. More often than not, you’re getting real eggs and quality ingredients. 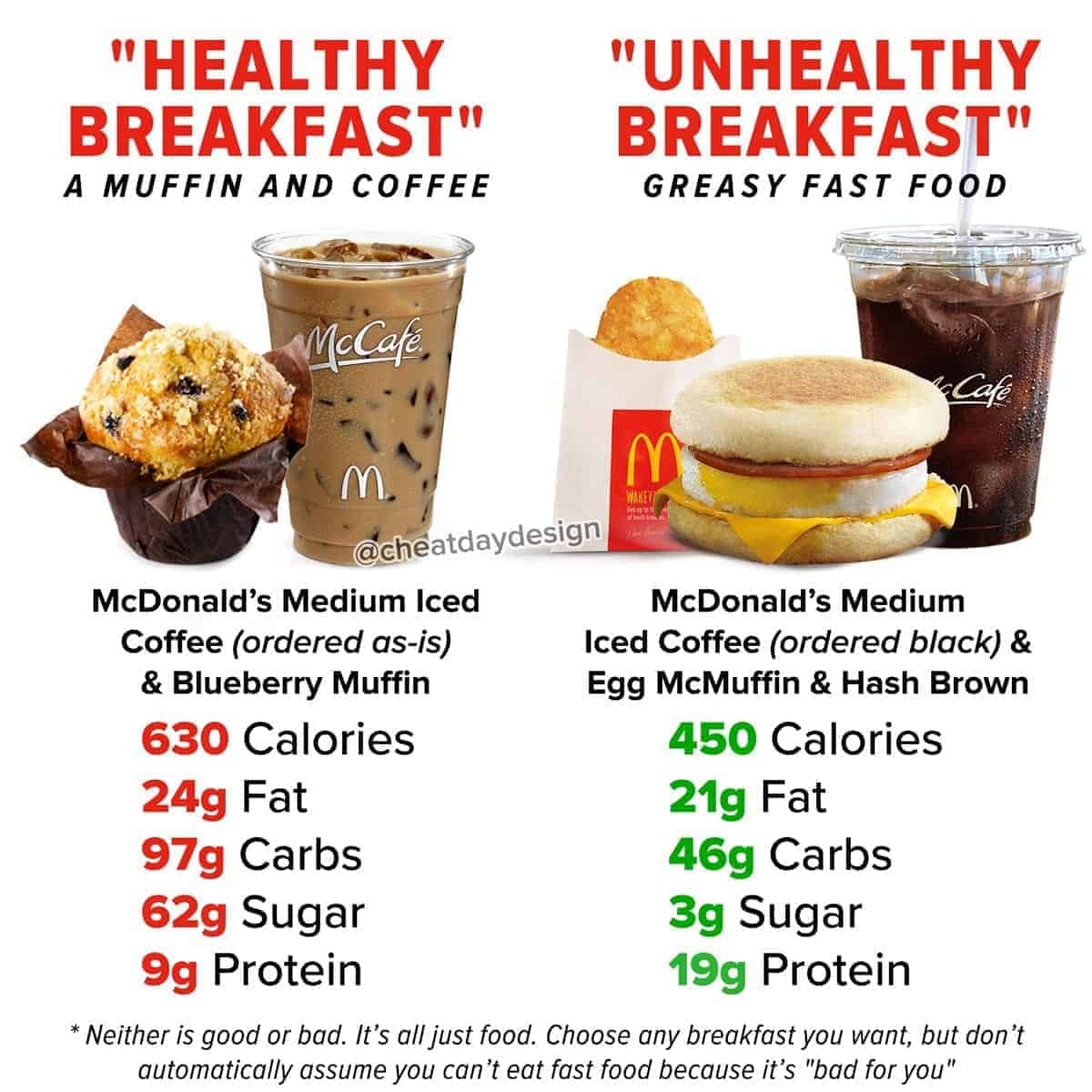 And when you break the food down into the macronutrients, you’ll see that it’s really not unhealthy at all! Sure, there are some very high-calorie, high-fat, and overall not great options you can order, but there are also some great options!

Instead of assuming a sandwich from McDonald’s is automatically bad, break down the macros (nutrition facts).

In the past, I would have assumed a blueberry muffin would be a better choice than a breakfast sandwich and hashbrown from McDonald’s, but when you look at the nutrition, you can see that is not necessarily the case at all.

This is why I love breaking down different options into their macronutrients- it makes food that you would have otherwise considered unhealthy seem not only realistic, but actually appealing!