When it comes to figuring out the calories in donuts, there are many factors that come into play.

Is it a cake donut or a yeast donut? Is it filled? What it is topped with? Is it baked or fried?

Well, we’re going to break it all down to make sense of it all. 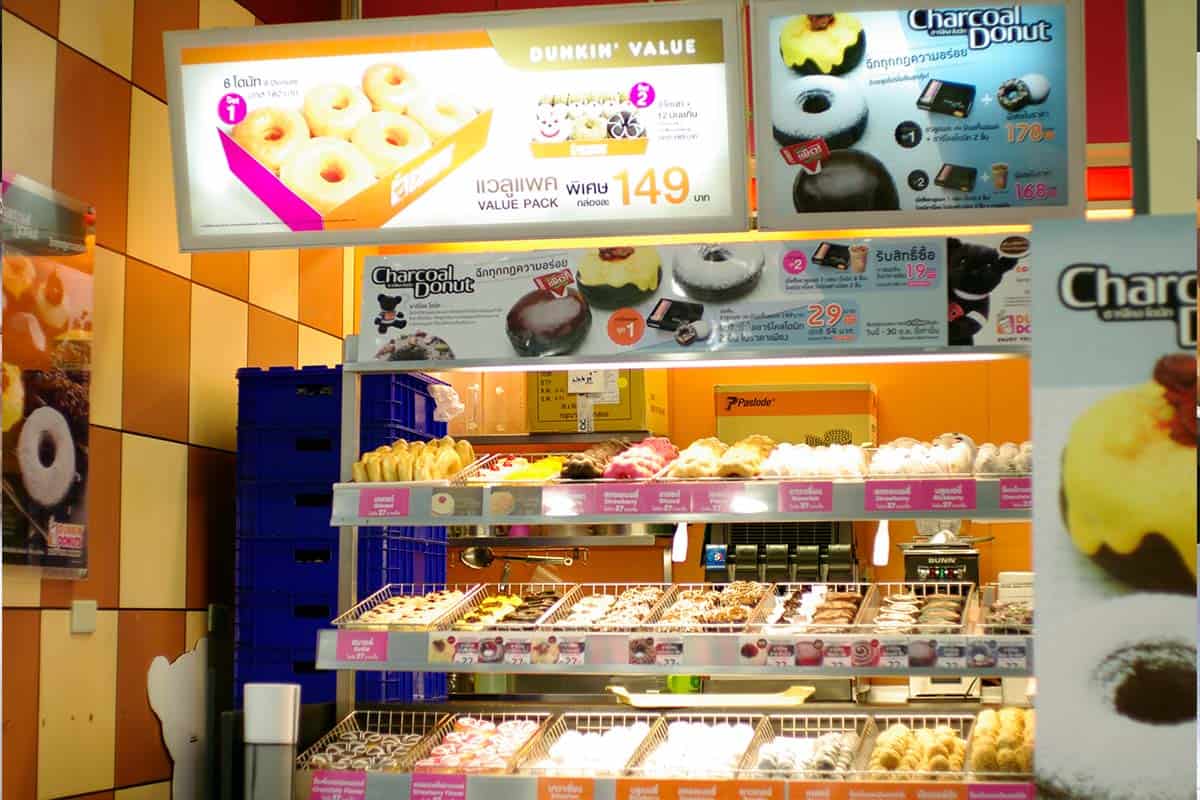 If you’d like to view this post as a quick web story, you can check that out right here.

How do you estimate calories in donuts?

If you find yourself grabbing a fresh donut from a local spot, how do you figure out how many calories there are?

This is where estimating comes into play.

My preferred strategy is finding somewhere that does say how many calories are in their donuts and using their donut calories as a reference.

How exactly can you use Dunkin and Krispy Kreme to figure out the donut calories of a local spot?

Let’s say you’re hitting up District Doughnut in DC (I tried their donuts when traveling and they were incredible, for the record) and you get a glazed donut.

With no nutritional info available, you’re left to guess how many calories are in that donut.

I simply use the average of the two to estimate my donut calories at local spots, just like I do when eating out at restaurants. 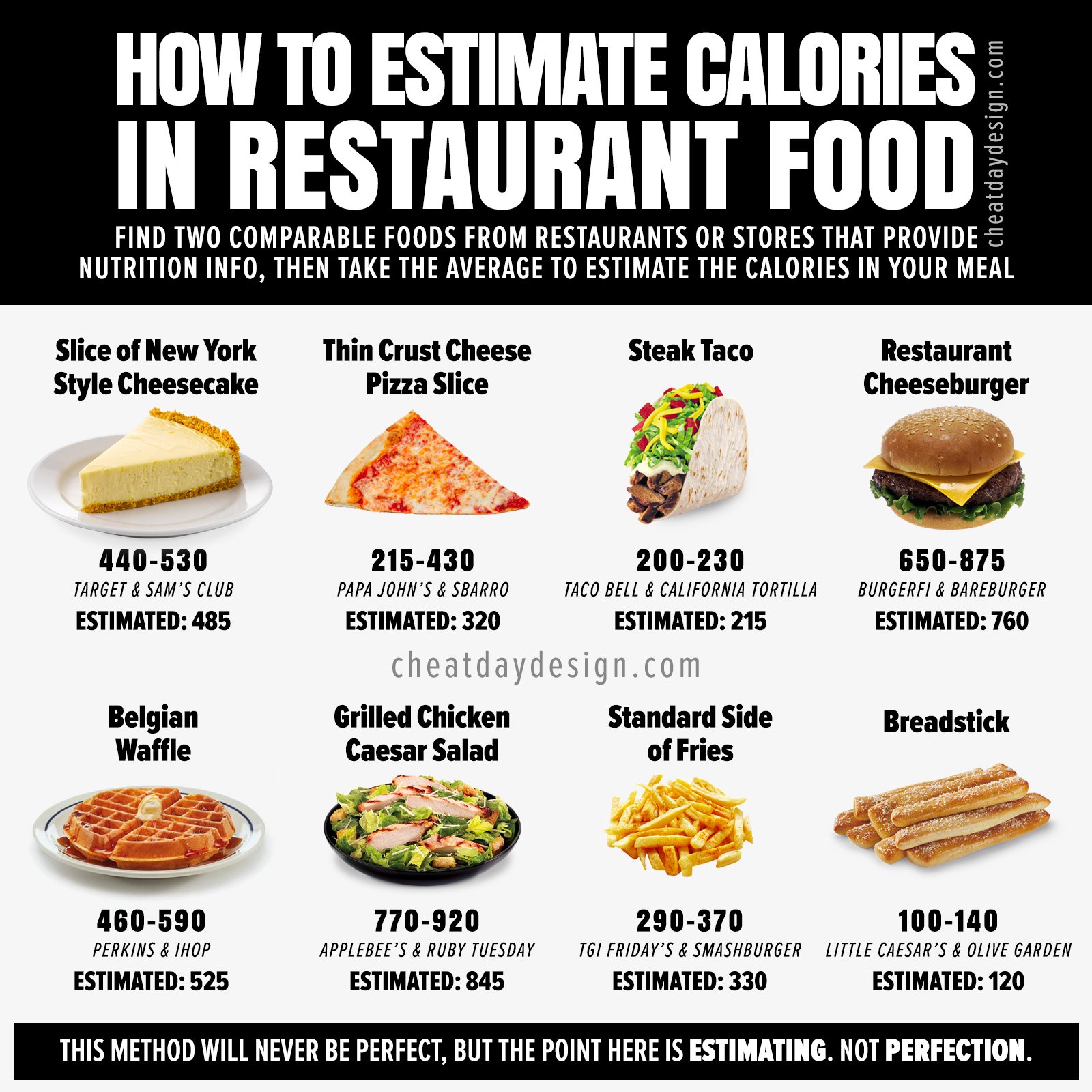 When we do a quick search, we find that Dunkin’s glazed donut has 240 calories and Krispy Kreme has 190 calories. There’s a bit of a difference here, but not much!

In this case, I’d count the glazed donut as having 215 calories. If the donut you’re eating is gigantic, of course, that will change things a bit. But if it’s a standard-sized donut, I feel comfortable using the average to estimate the calories.

Sure, it’s not going to always be accurate, but it beats taking a completely blind guess at how many calories are in the donut!

When looking at the donut calories guide above, it probably seems very strange that a plain donut has 100 more calories than a sugar donut.

The reason is that the plain donut is a cake donut, whereas the sugar donut is a yeast donut.

Cake donuts are dense and buttery. They use a leavening agent such as baking powder to get their rise, and they’re similar to a cupcake/muffin texture. A traditional powdered sugar donut is an example of a cake donut. If you bake donuts at home, you’re likely baking cake donuts.

Yeast donuts are light and airy as they use yeast to get their rise. Any donuts with a glaze, icing, or filling are typically yeast donuts.

If you’re interested in the history of these doughnuts and the differences, there’s a great breakdown here. 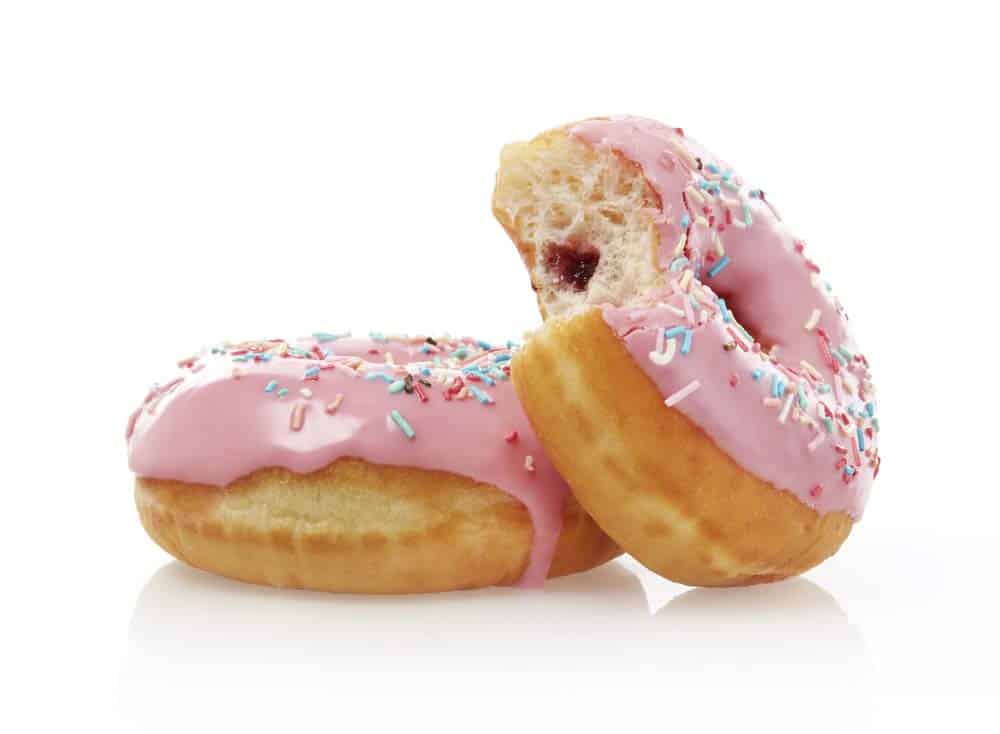 Why do cake donuts have more calories than yeast donuts?

It comes down to density. If you were to hold a cake donut in one hand and a yeast donut in the other, you’d feel how much heavier the cake donut is.

If calories are a concern, I would opt for a yeast donut. Although the difference is fairly minimal, the light & airy dough of these doughnuts is going to bring the calories down a bit.

Just be on the lookout for fillings: many yeast donuts will have a filling of some kind, which can bump up the donut calories quite a bit.

Calories for each type of donut

Let’s look at some of the most popular flavors of donuts and how the calories stack up at Dunkin’ vs Krispy Kreme.

Of course, there are other donut shops out there, but with these two the most popular, it makes sense to use ’em as our examples here. Remember, it’s all about estimating. 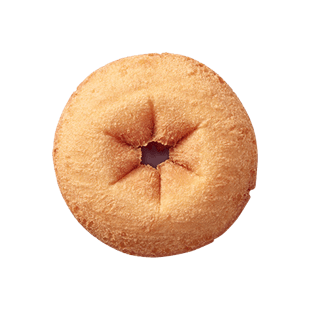 The plain donut may also be referred to as a “traditional cake” donut. It’s slightly less sweet than most of the other donuts you’ll find, but it’s still rich and dense, and perfect for dipping into coffee.

Remember, the plain cake donut is going to have slightly more calories than if you had a plain yeast donut due to the density and slightly different ingredients vs a yeast donut. 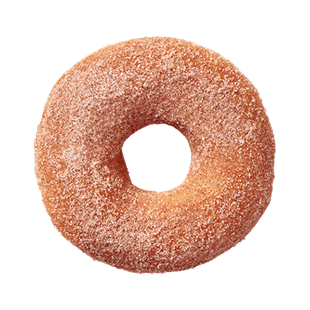 The sugar donut is a yeast donut that is tossed in sugar immediately after frying (or in the case of Krispy Kreme, tossed in cinnamon & sugar).

You typically won’t find a “plain” yeast donut, so this is the next best thing!

Since the sugar coating is only sugar, and not something heavier like a glaze, this is the lowest calorie yeast donut you will typically find. 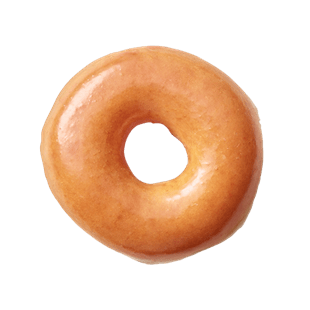 My personal favorite: the glazed donut. A glazed donut will typically have right around 200 calories, which is surely not going to re-rail any diet.

I’m a sucker for a light & airy yeast donut, and the hardened sugar glaze on the outside creates the perfect texture in my eyes. The glazed donut is also the reason for that “Hot Light” at Krispy Kreme- when the light comes on, it means they have fresh glazed donuts ready for you. 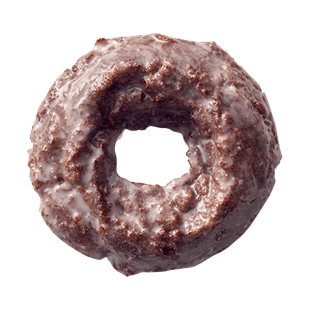 What’s the difference between a glazed chocolate donut and a regular glazed donut (outside of the obvious answer of “chocolate”)?

If you’re in the mood for a sweet donut but calories are a concern, choosing an original glazed over a chocolate glazed can save you nearly 100 calories! 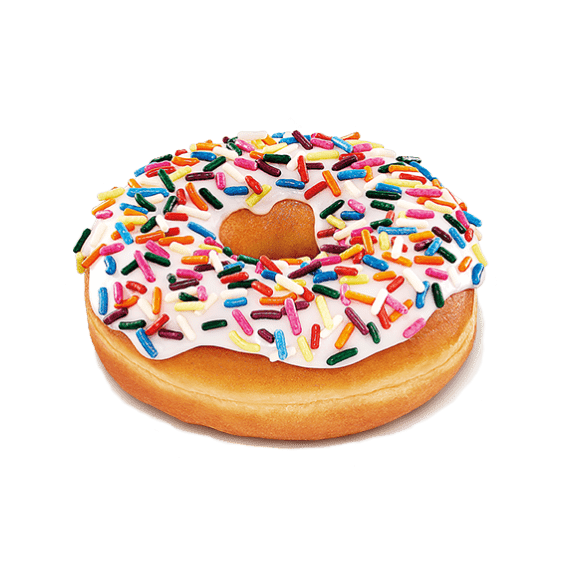 Growing up, the frosted donut with sprinkles from Dunkin was always my favorite. More specifically, the strawberry frosted donut. These donuts are very similar to glazed, with the difference being the slightly thicker frosting on top and the addition of the sprinkles.

Dunkin serves up a vanilla frosted donut, but Krispy Kreme only has chocolate & strawberry on their menu.

What if you leave the sprinkles off? If you were to order a chocolate iced doughnut from Krispy Kreme, the calories would drop t 250 calories. Not a huge difference, but worth noting! 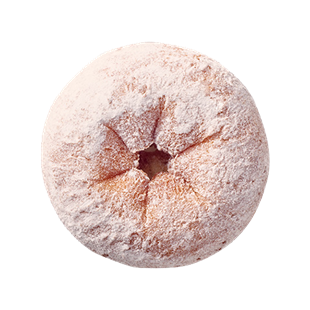 This one is another classic, and for very good reason: they are absolutely delicious. I mean, who doesn’t love powdered sugar? 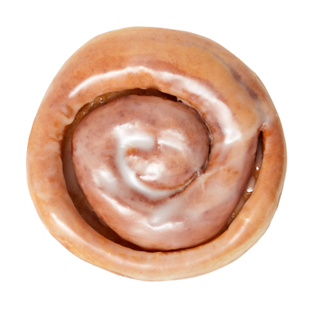 This is where things start to get a bit tricky. The coffee roll from Dunkin is very similar to the cinnamon roll you can get from Krispy Kreme, but clearly there is a difference in calories- 110 calories to be exact. While they’re certainly similar products, the coffee roll from Dunkin’ is larger than the cinnamon roll from Krispy Kreme, resulting in higher calories.

If calories are a concern for you, this one may not be your best bet. Between the glazed outside and the brown sugar & butter on the inside, the cinnamon roll is a bit higher in calories than many other donut options. 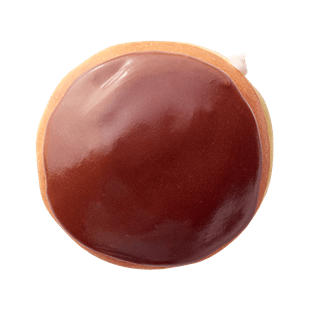 The boston kreme donut is many people’s favorite donut. Personally, I’m not a fan of cream filling in donuts, but I can see the appeal.

Much like the cinnamon bun above, there is quite a discrepancy in the calories of these doughnuts. Since every donut shop uses its own unique filling with different ingredients, it’s no surprise that the calories differ.

If you’re trying to estimate the calories in a boston cream filled donut at a local spot, keep in mind that this one can vary quite a bit. 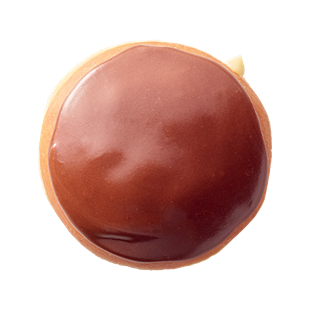 While Krispy Kreme doesn’t technically have an Eclair, their chocolate iced custard-filled donut is the closest comparable item!

An eclair is a long French pastry that is filled with custard (or pastry cream) and often topped with a chocolate frosting. 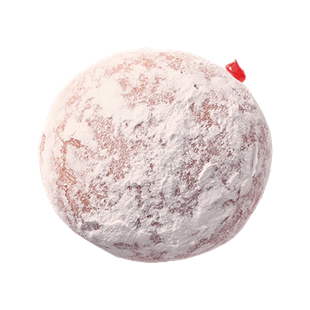 The jelly-filled donut is another classic that you’ve most likely tried (or at the very least, seen).

Depending on where you order this donut from, the filling can be a variety of different flavors, not just strawberry. Lemon, blueberry, and raspberry are all popular versions of jelly-filled donuts, and you’ll find seasonal varieties like apple, as well. 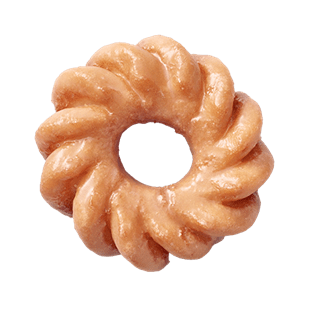 What is a cruller, you ask? It’s a wonderfully flakey pastry that tastes like a cross between a donut and a croissoint. I hadn’t tried one until recently, but man, I have been missing out!

At Dunkin, it looks like they use a yeast dough for the crullers, as the calories are very similar to their glazed donut. At Krispy Kreme, the description says that they use a cake doughnut, which explains the slightly higher calories. 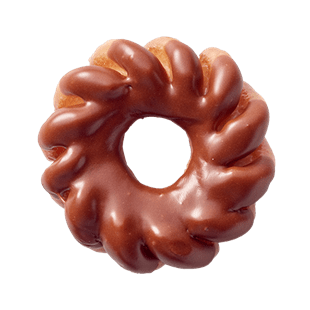 What happens when you take a cruller, but add some chocolate frosting instead? Well, it adds about 50 calories! 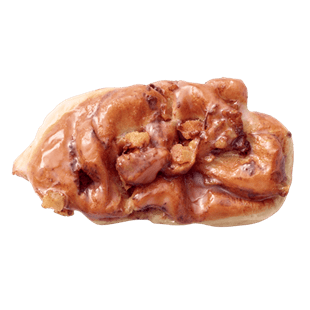 Apple Fritters are a tough one to estimate calories for, because they can vary quite a bit. 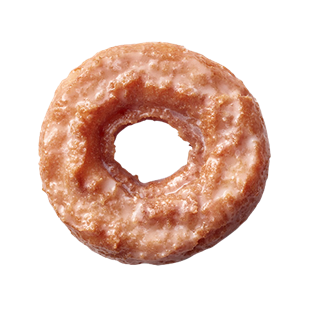 Sour cream donuts are similar to traditional cake donuts, but with sour cream added to the doughnut batter.

The result is a slightly tart flavor, and the resulting sour cream donut has a crisp on the outside while staying soft and moist inside. 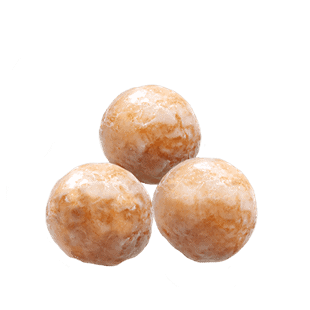 Donut holes are exactly what they sound like- they’re the little balls of dough that are cut out of the donuts when they make them!

They’re typically cake donuts, but both Dunkin and Krispy Kreme have yeast-risen versions as well. I used to eat Pop’Ems as a kid, which are glazed donut holes sold by Entenmann’s, and they’re incredible. When I checked the calories of those, each donut hole is 60 calories, making this estimate seem quite accurate.

An original Munchkin from Dunkin contains 70 calories, but the other glazed and powdered sugar varieties contain only 60 calories. At Krispy Kreme, every type of donut hole contains only 45 calories.

What is the lowest calorie donut?

It may be surprising to see that the lowest calorie donut is a sugar donut.

A sugar donut is a yeast-risen donut, making it light and airy and overall lower in calories than a traditional cake donut.

The most common yeast-risen donuts are glazed, contain frosting/icing, or are filled with jelly or custard. Because of this, they all contain more calories than the sugar donut, making that the lowest calorie option!

A typical sugar donut will contain 200 calories, and you can see how it compares to the other types below: 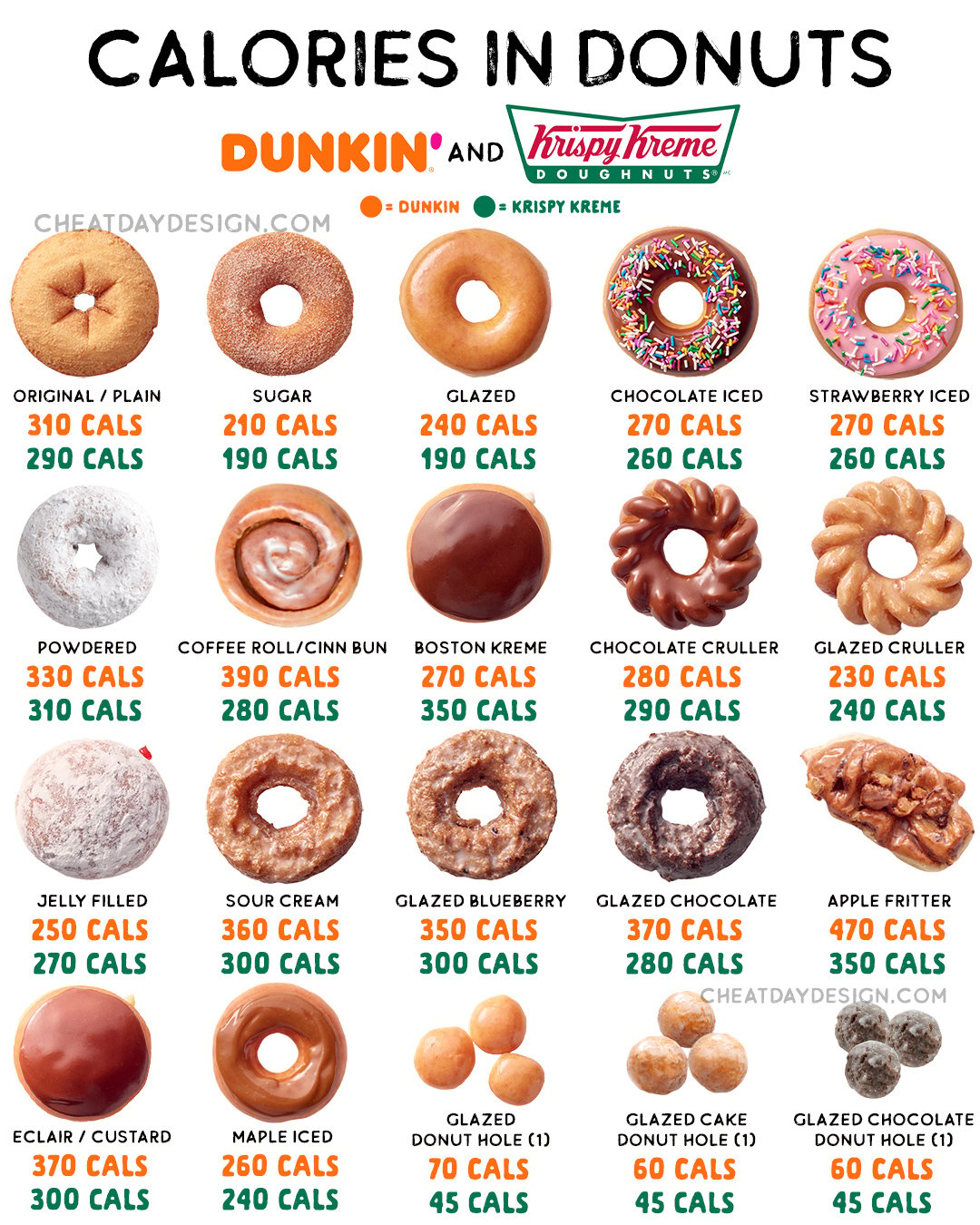 Is Dunkin or Krispy Kreme healthier?

It’s impossible to say which is definitively “healthier” because the way we each define healthy varies.

However, if you are watching your calories, it’s clear that Krispy Kreme is a better choice than Dunkin overall.

With the exception of the jelly-filled donut and Boston Kreme donut, each donut from Krispy Kreme contains fewer calories than Dunkin.

Donuts may not necessarily be healthy, but as someone who fully believes in taking a flexible dieting approach, I believe donuts have a place in any diet.

If you’re curious what the overall nutrition looks like for these donuts outside of just the calories, here is how a glazed donut breaks down:

Make your own low-calorie donuts at home

Making healthy donuts at home is much easier than you might think.

Traditional yeast donuts require quite a bit of work (who wants to mess with letting the dough sit and rise?) but you can easily make healthy donuts without using any yeast at all.

I’ve got plenty of healthy, low-calorie donut recipes right here on my site for you! 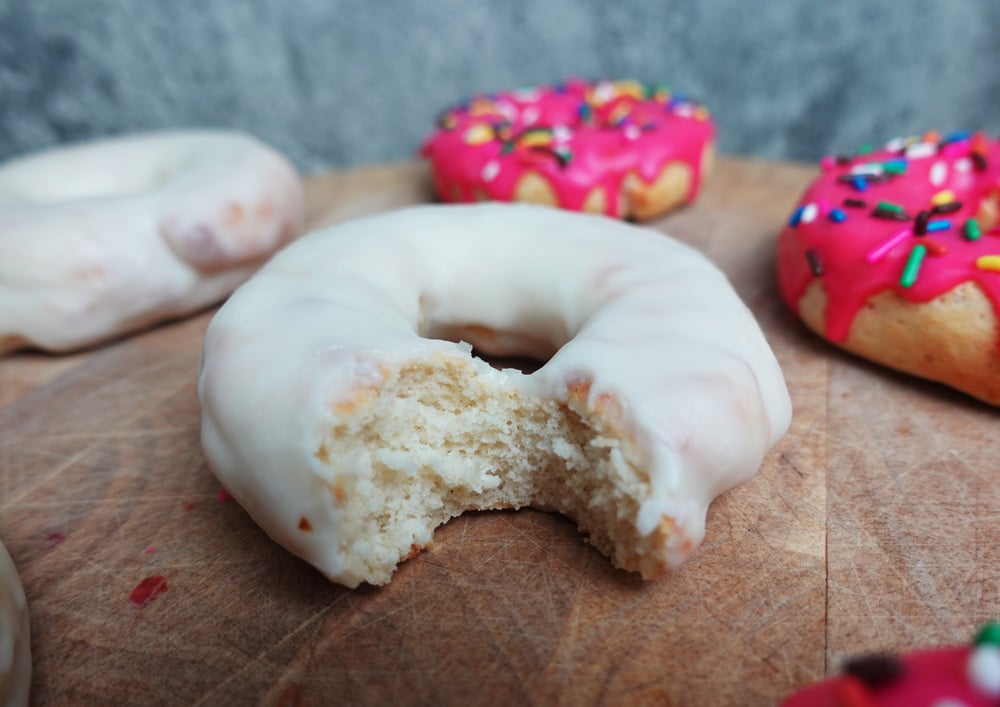