This recipe took me a few tries, but I’ve finally landed on a version that I am proud to bring you. 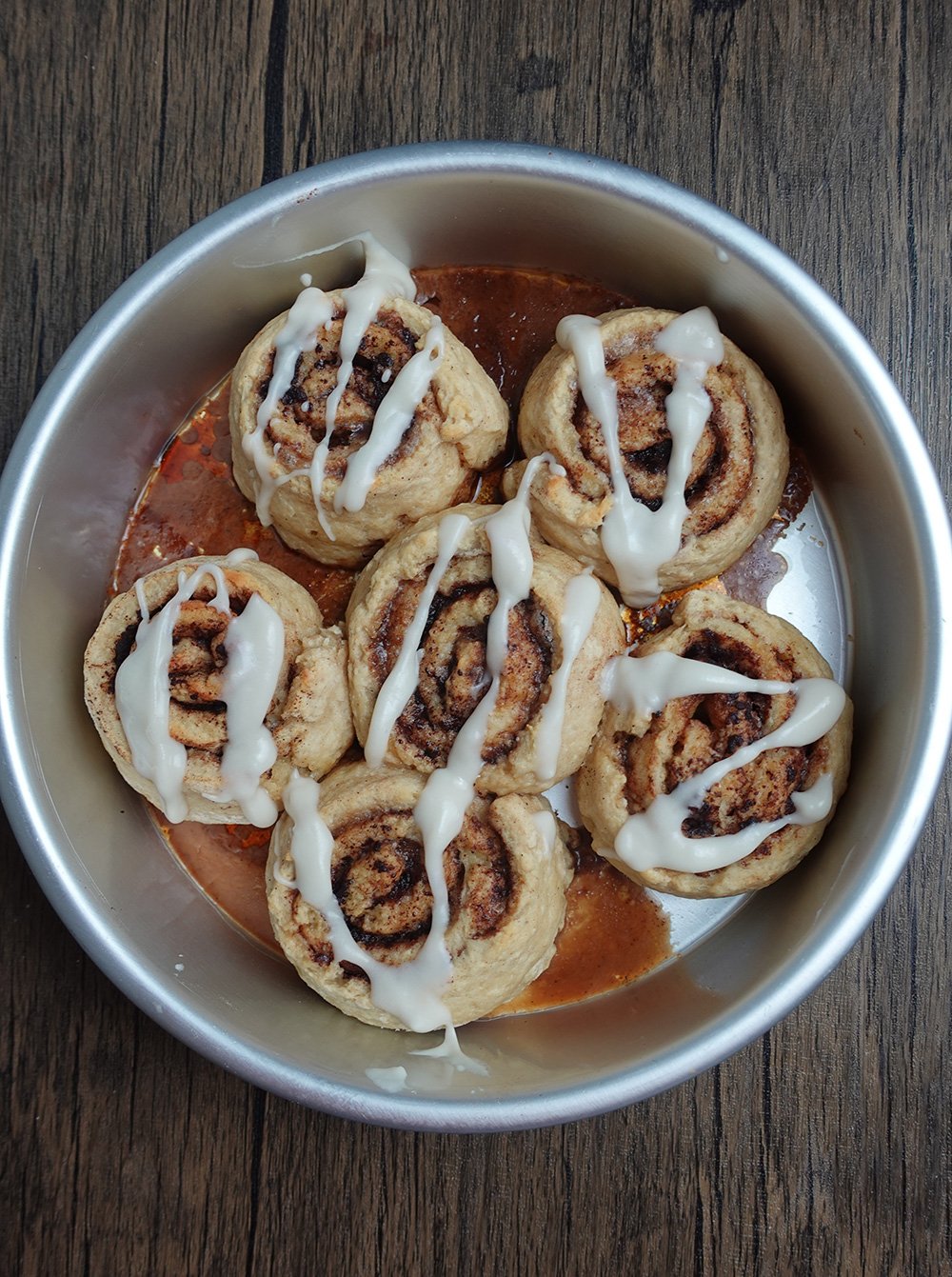 These protein cinnamon rolls are packed with 11g of protein each, but you’d never know it. They’re soft, buttery, and packed with delicious cinnamon flavor.

This recipe is kid-approved, and it’s a perfect recipe to make with your kids on a weekend or snowy day. They’ll never know that they’re secretly healthy!

In my trials, I made sure that you’d be able to peel these protein cinnamon rolls, because what fun is a cinnamon roll if you can’t peel it all the way down to its core? 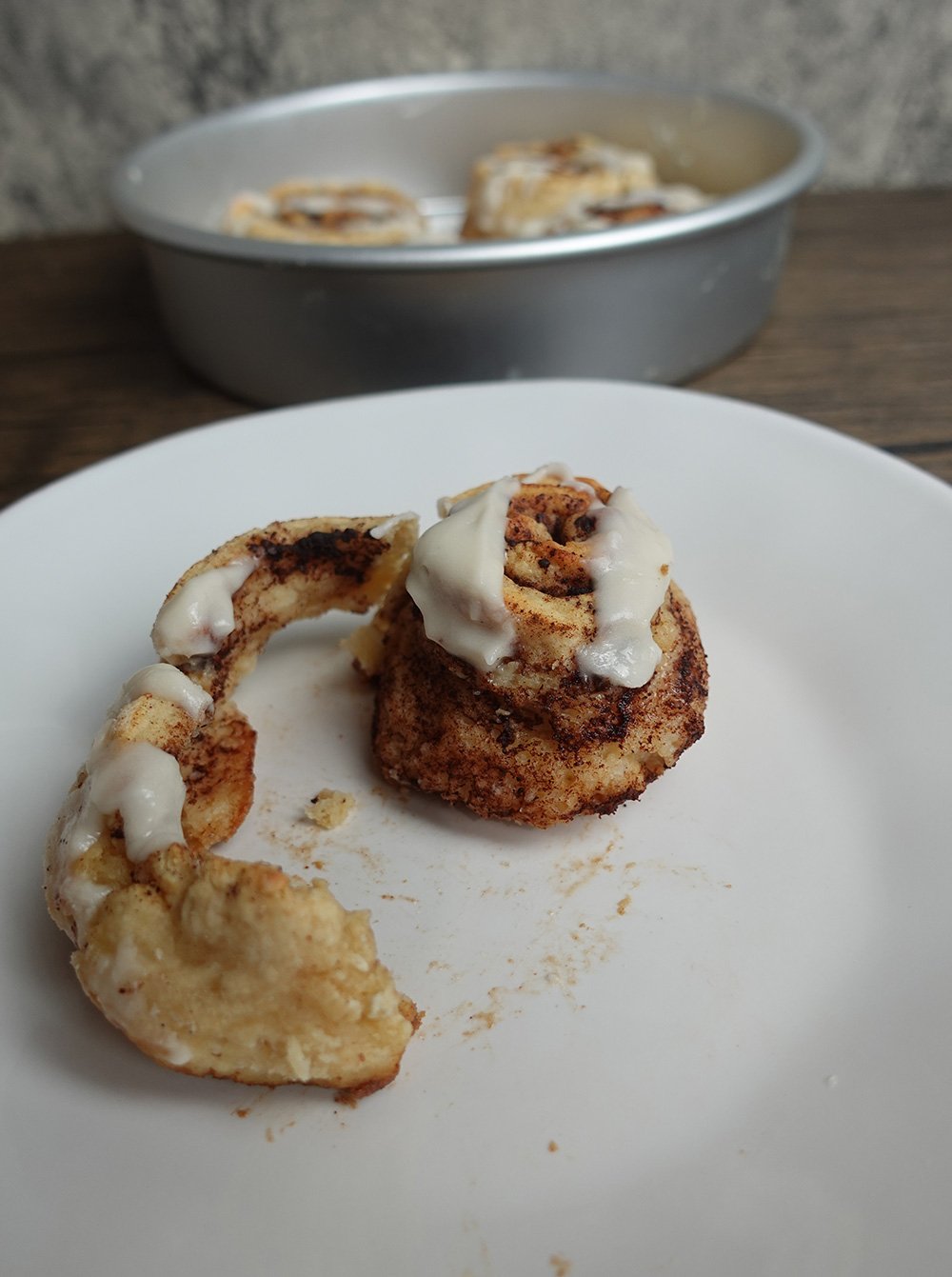 If you need some validation that these protein cinnamon rolls are actually as good as they look, the reviews I’ve been getting over on Instagram have been nothing but positive: 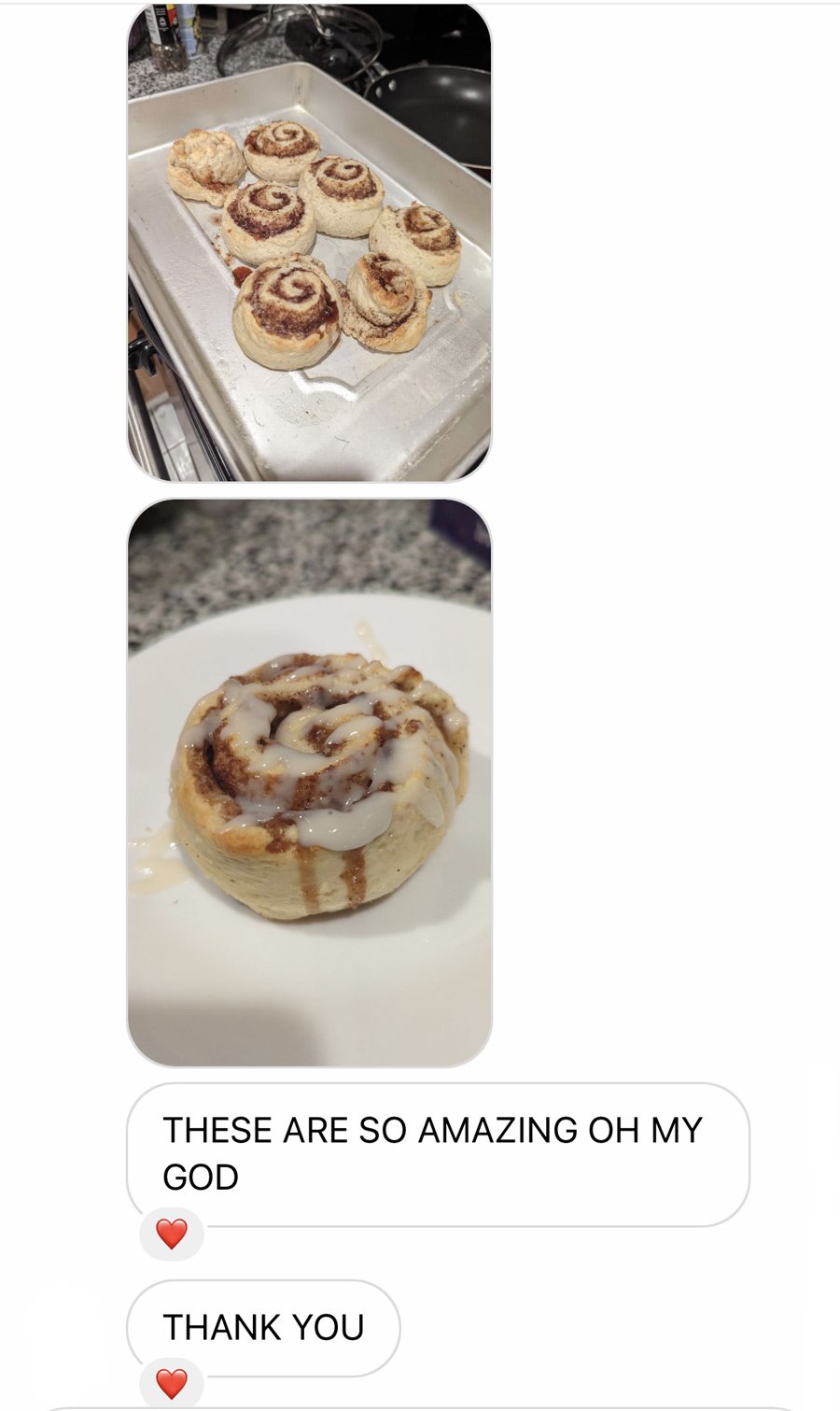 How to make protein cinnamon rolls

To make the cinnamon roll dough, you’re going to start by mixing all of the liquid ingredients together, then adding in the dry ingredients next.

Once you mix the liquid ingredients with flour, it’s going to start to resemble dough, but won’t quite be there yet. 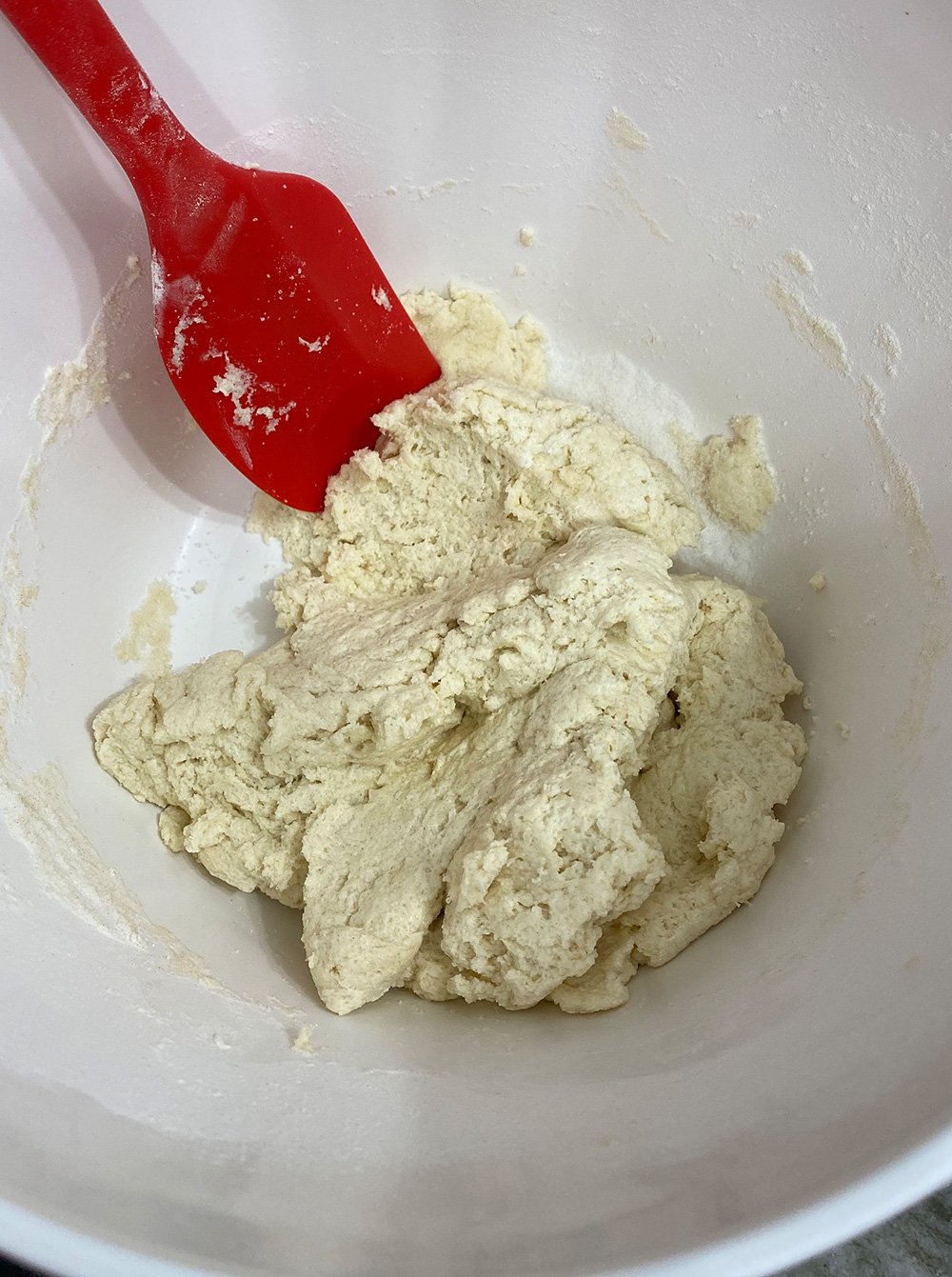 You’re going to add the protein powder as the last ingredient, and that is what is going to bring everything together.

As I learned in my Air Fryer Donut Holes recipe, adding the protein powder last makes a big difference. By adding it as the final ingredient, it will prevent the dough from becoming too sticky to work with.

It’s worth noting that I use a protein powder that is a blend of whey & casein protein, and I highly recommend you do the same. You can use 100% whey protein, but whey protein tends to be stickier and leads to baked goods that are drier (check out my Protein Powder Substitution Guide to see the differences). If you want to use the same protein powder I use, the code “Matt” will save you 15% on PEScience brand protein powder. 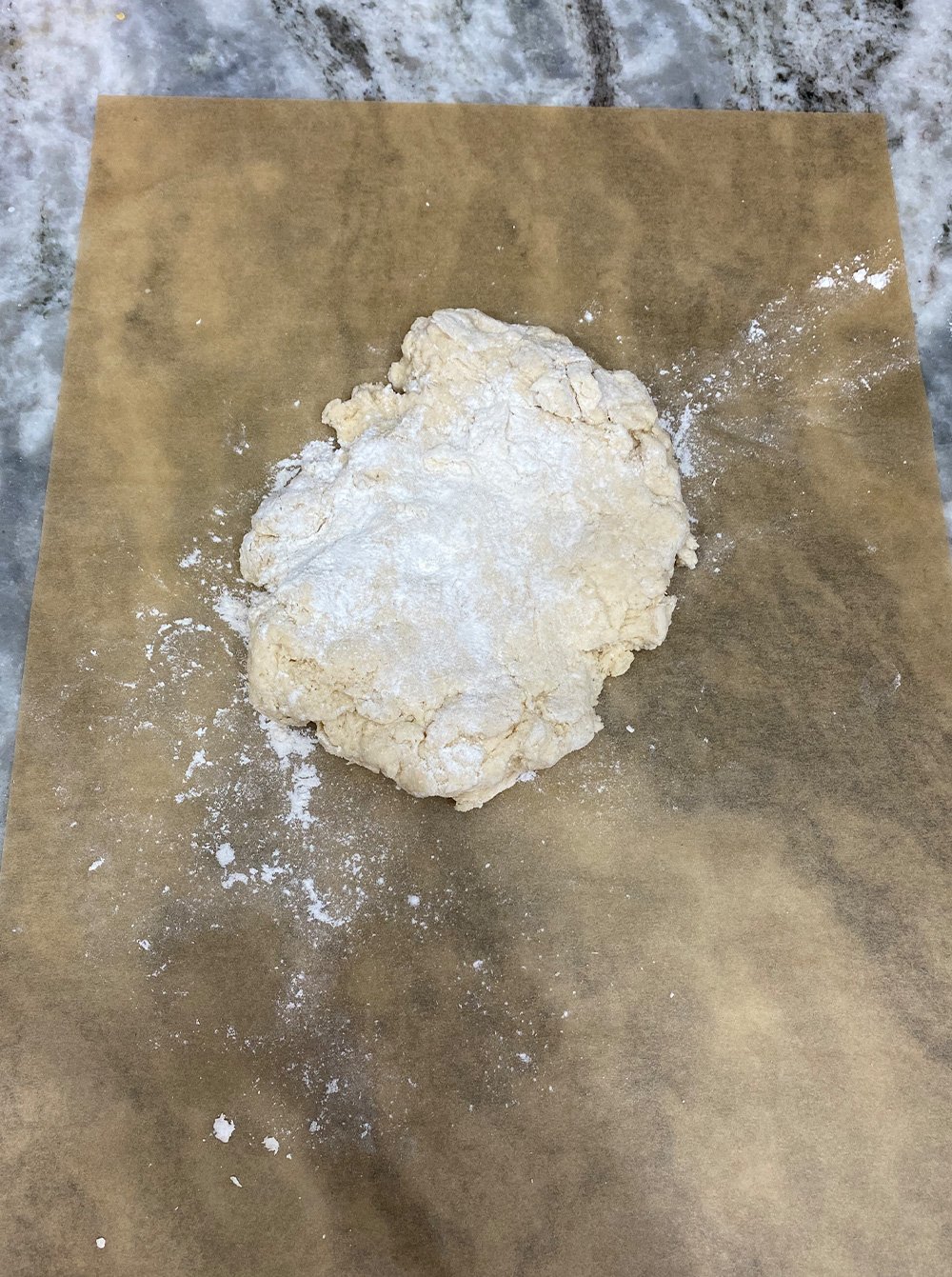 Once you have worked the dough with your hands to bring it all together, you’ll add the dough to a lightly floured surface to roll it out. I formed my dough on a sheet of parchment paper to make things easy, but it will work just fine on a clean countertop.

Using a rolling pin, roll the cinnamon bun dough out into a square. You can cut pieces off the ends and move them around to create the shape you need. Don’t worry, it doesn’t need to be perfect! 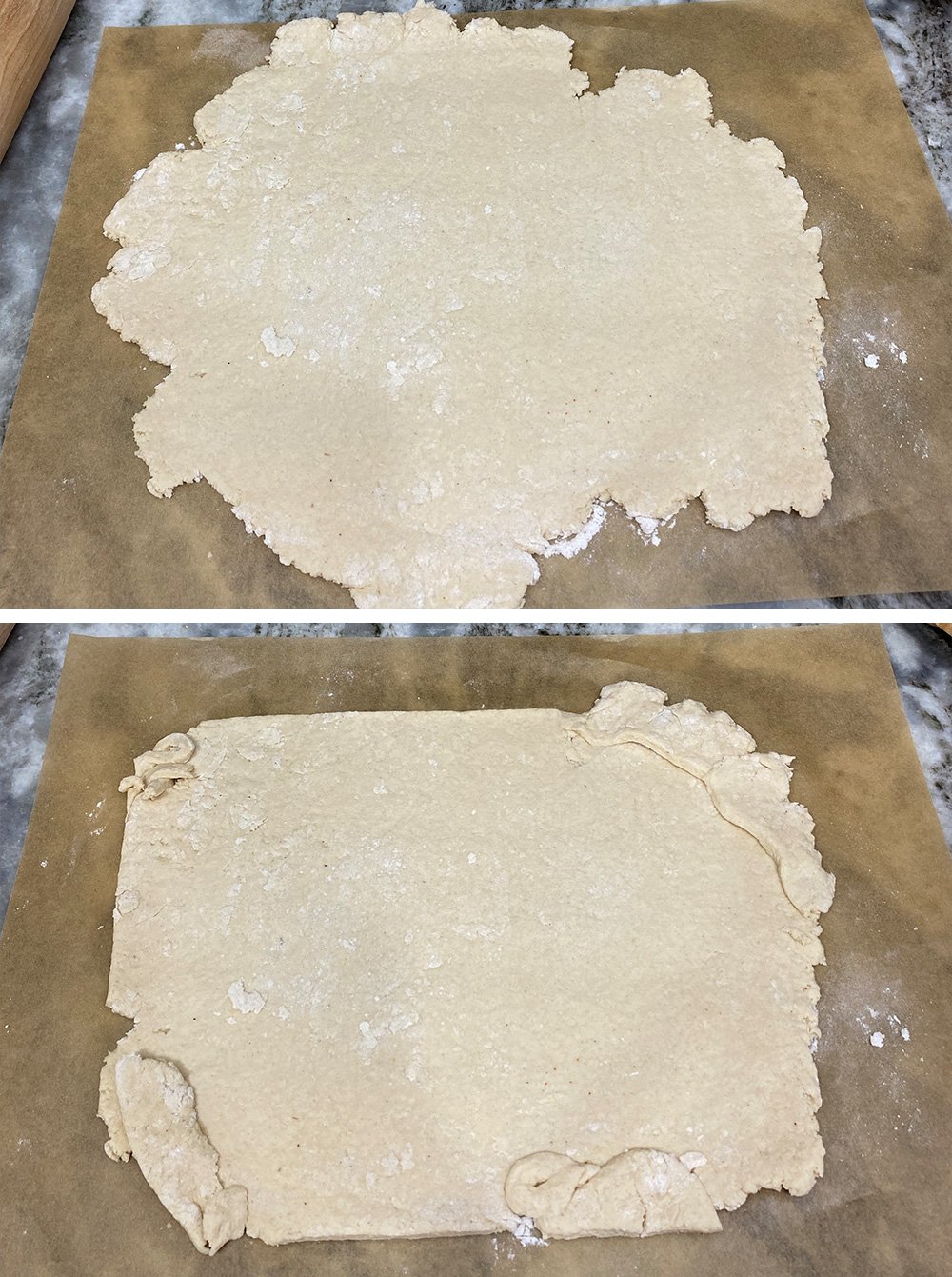 Use a butter knife or pizza cutter to slice straight edges all the way around, discarding the small number of scraps you’re left with.

Spread butter over the entire sheet of dough, add the brown sugar sweetener over the butter, then sprinkle cinnamon over the top. Note that I use Country Crock as my butter, which is a light butter spread, so it’s very easy to spread over the dough. If you use regular butter, you’ll want to make sure it is room temperature, or softened in the microwave, to be able to easily spread. 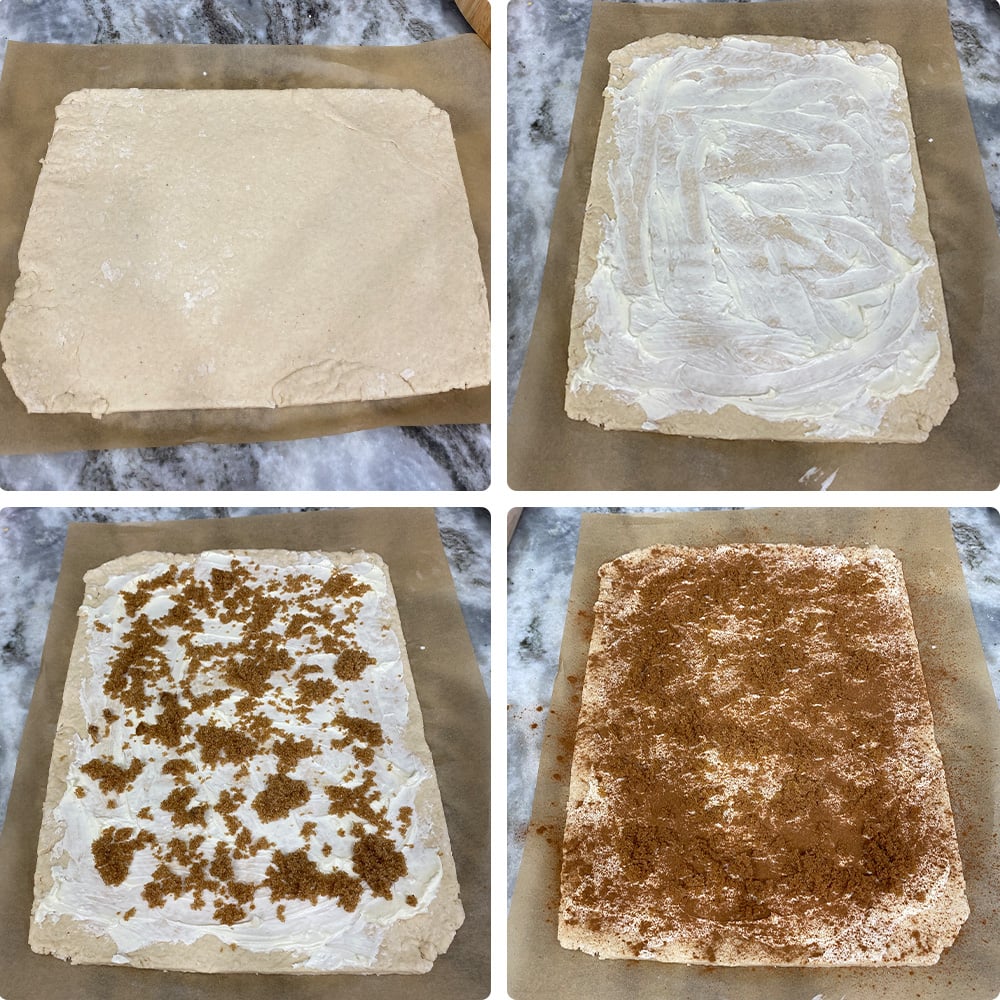 Roll the cinnamon roll dough towards you, trying to keep it as tightly rolled as possible. I used the parchment paper to pull it towards me to allow the dough to roll itself, but you can also simply use your hands. Plastic wrap is also a great way to roll the dough, as you’ll find in my Oreo Sushi Roll recipe.

Spray an 8″ cake pan and add your cinnamon rolls. You can bake these protein cinnamon rolls on a baking sheet as well, but using a pan keeps everything nicely enclosed and allows the cinnamon rolls to bake into each other a bit. 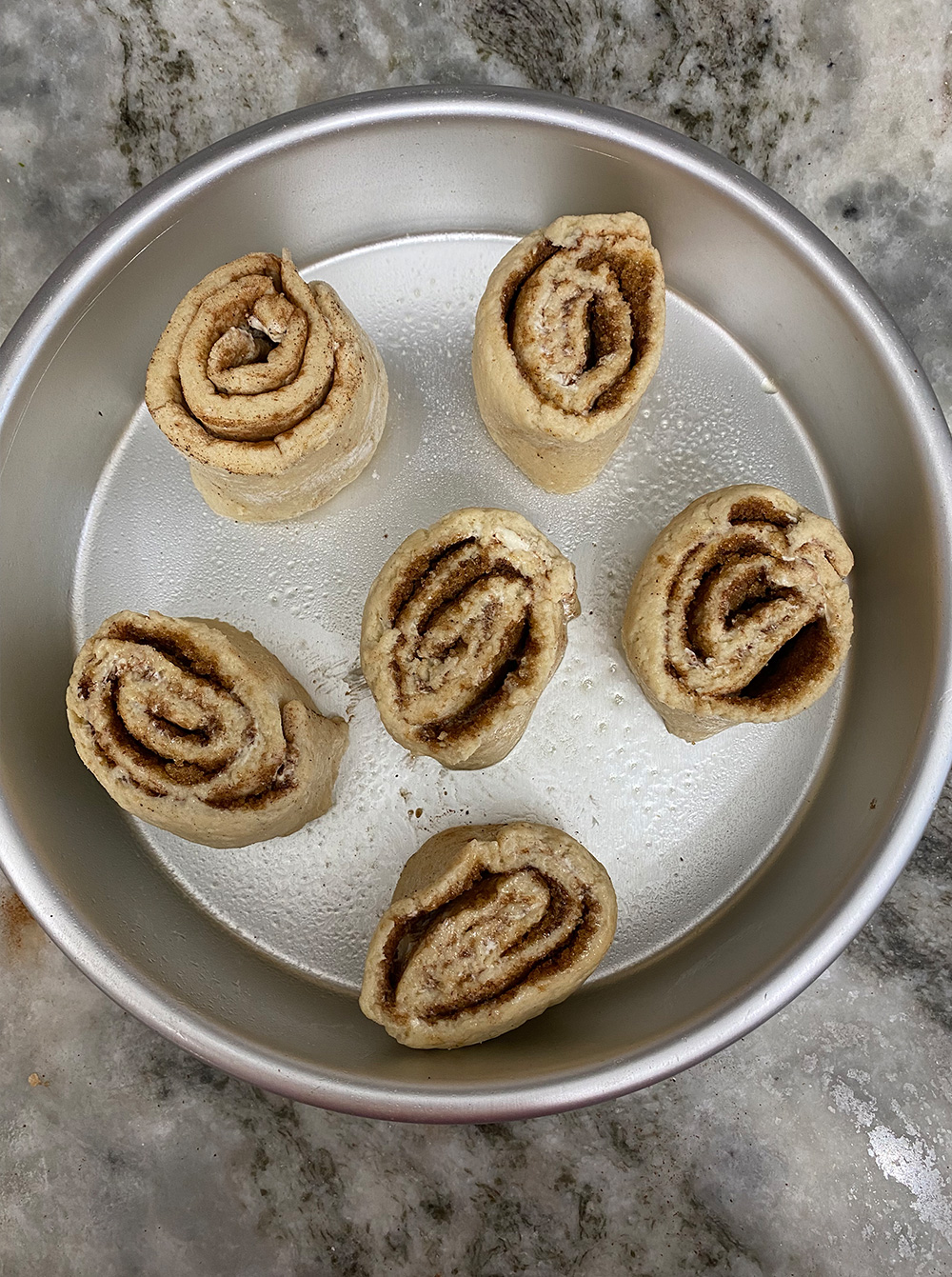 I drizzled some butter over the top of my cinnamon rolls before baking, which is why you see so much caramelized butter on the bottom of the pan. It wasn’t detrimental, but it didn’t add anything to the final product, so I left that step out of the recipe. 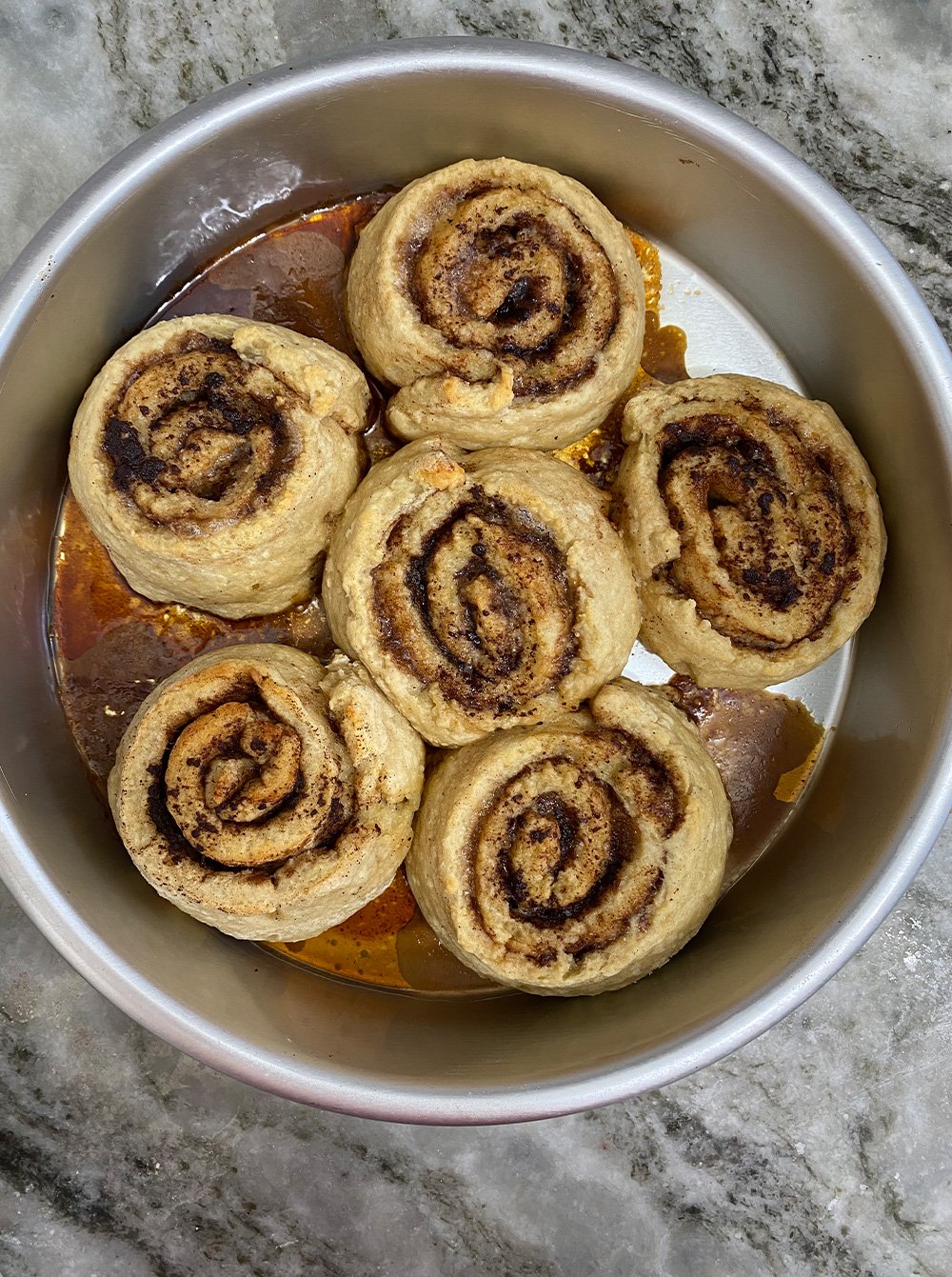 Although I must admit, it did create a beautiful caramelization on the bottom of my protein cinnamon rolls! 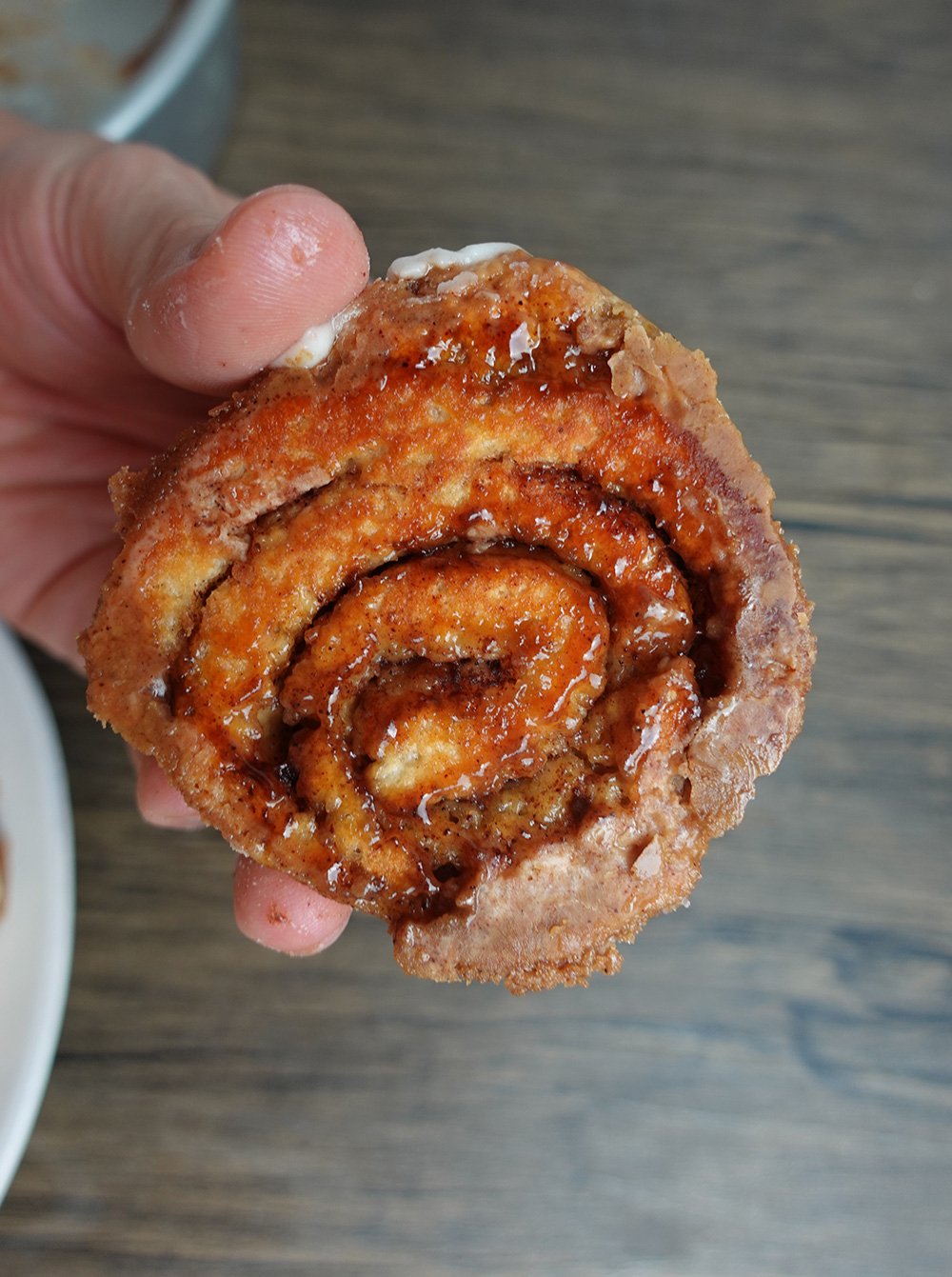 Allow the warm cinnamon rolls to cool for about 10 minutes before adding your icing. I created a very simple icing by mixing together powdered sugar substitute and milk in a small bowl, but a cream cheese icing (like in my Funfetti Cupcake recipe) would work great here.

Enjoy these warm cinnamon rolls fresh out of the oven, or save the leftovers in an airtight container and enjoy them throughout the week.

As a kid, I would eat Cinnamon Toast Crunch pretty much every single morning, so it’s no secret that I absolutely love cinnamon sugar.

I mean, who doesn’t?

Here are some other recipes worth checking out if you’re a cinnamon lover: 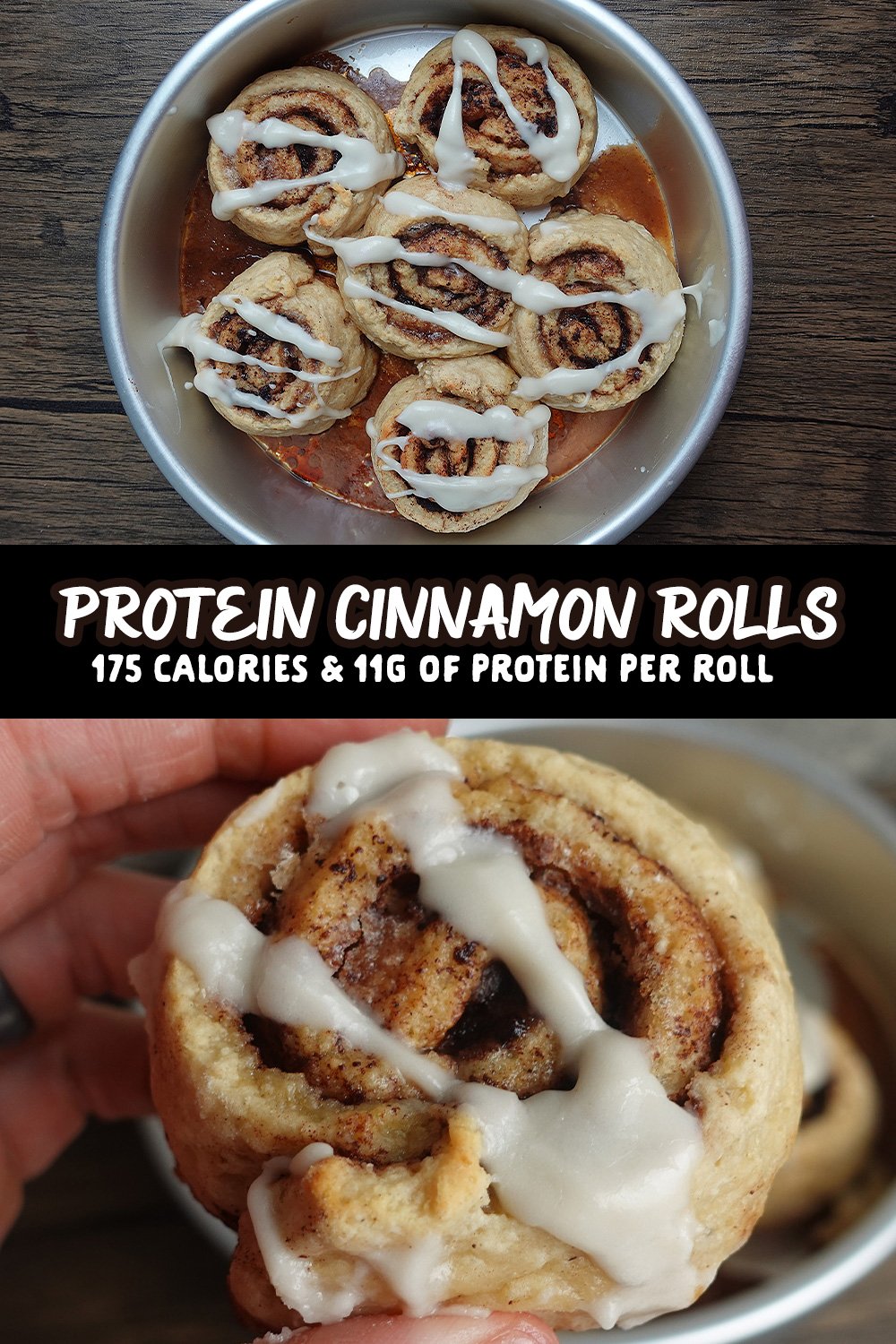 If you are gluten free, I can't promise that almond flour will work in this recipe, but a 1:1 gluten-free flour replacement should work.

I made these last night and warmed up two in the air fryer this morning. SOOOOOO good! Moist in the middle and very cinnamony. Cannot taste the protein powder. Felt like I was a "regular" cinnamon roll! Very easy to make.

Jill Christine uses cake pop and a little water for her icings. A little extra protein 😊