All images property of Panera Bread

When it comes to healthy eating, most people don’t think about fast food as a viable option.

But if you find yourself in search of a healthy option on the go, Panera can be a fantastic option!

The Panera Bread menu offers a ton of options, so we’re going to break down the full menu to find some of the best options to order.

Remember: there are no clear-cut “good” or “bad” menu items to order. We’re simply going to break down the Panera menu to help you decide for yourself which menu item you may want to order!

While “healthy” is certainly subjective, it’s clear that Panera is a great option in the realm of fast-casual food.

When it comes to food quality, Panera’s personal guarantee is that they will only use ingredients that they deem to be 100% clean. What exactly does this mean?

According to the Panera Bread website, “clean describes food that does not contain artificial preservatives, sweeteners, and flavors along with colors from artificial sources.” They’ve compiled a list of nearly 100 ingredients they do not allow in their food due to the promise.

If whole, healthy ingredients are what you are after, Panera Bread is a great option.

But what if your definition of “healthy” describes something that is low-calorie, low-fat, or something else? Well, let’s break down the menu to see which items fit your diet the best! 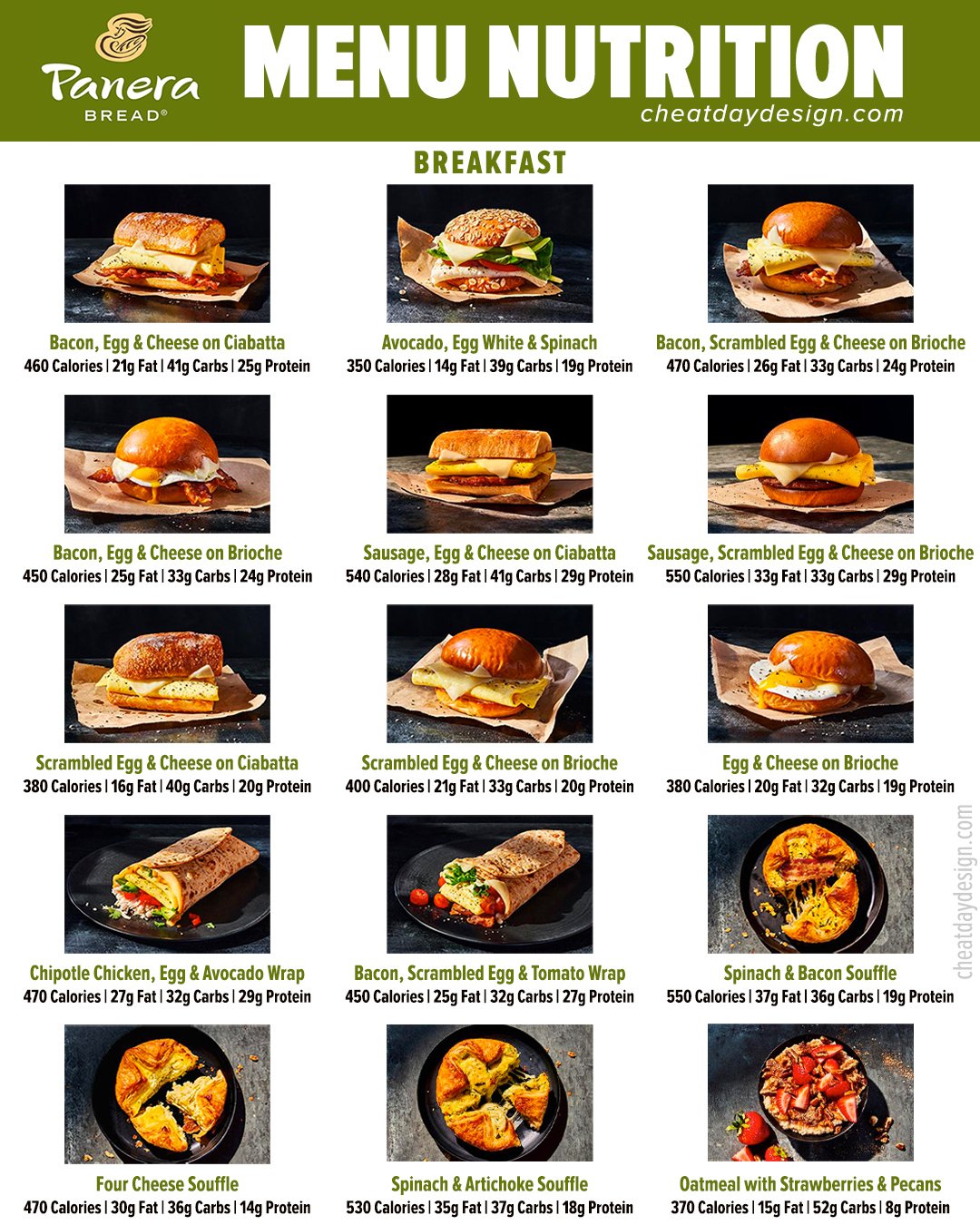 Panera serves breakfast before 10:30am, and they have a ton of sandwich options on their breakfast menu.

All sandwiches are served on either a brioche roll, ciabatta, multigrain roll, or inside of a wrap.

With any of Panera Bread’s breakfast sandwiches, you can swap the bread for any type you prefer! If the sandwich is not appealing as-is, you can choose any bagel that Panera has in stock on that day.

If you want to save calories on any sandwich, you also have the option to swap the scrambled egg or over-easy egg for egg whites! 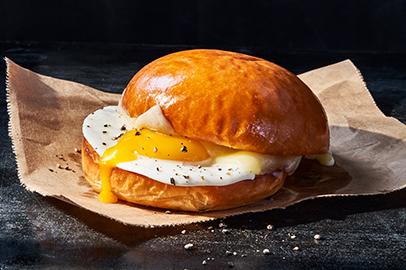 If you want to keep your calories low, you can stick with the classic egg & cheese sandwich for only 380 calories. If you were to swap the over-easy egg for egg white, the entire sandwich would contain only 345 calories. 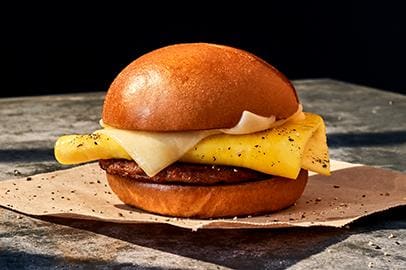 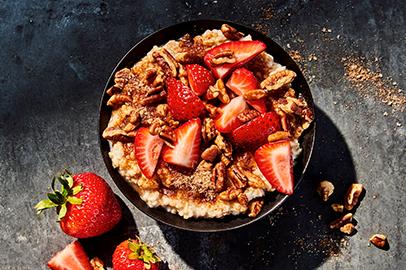 If you want something other than a breakfast sandwich, the steel cut oatmeal is a great option! While Panera offers a lot of bakery items such as muffins, cookies, cinnamon rolls, and more, the oatmeal will be your most filling option. 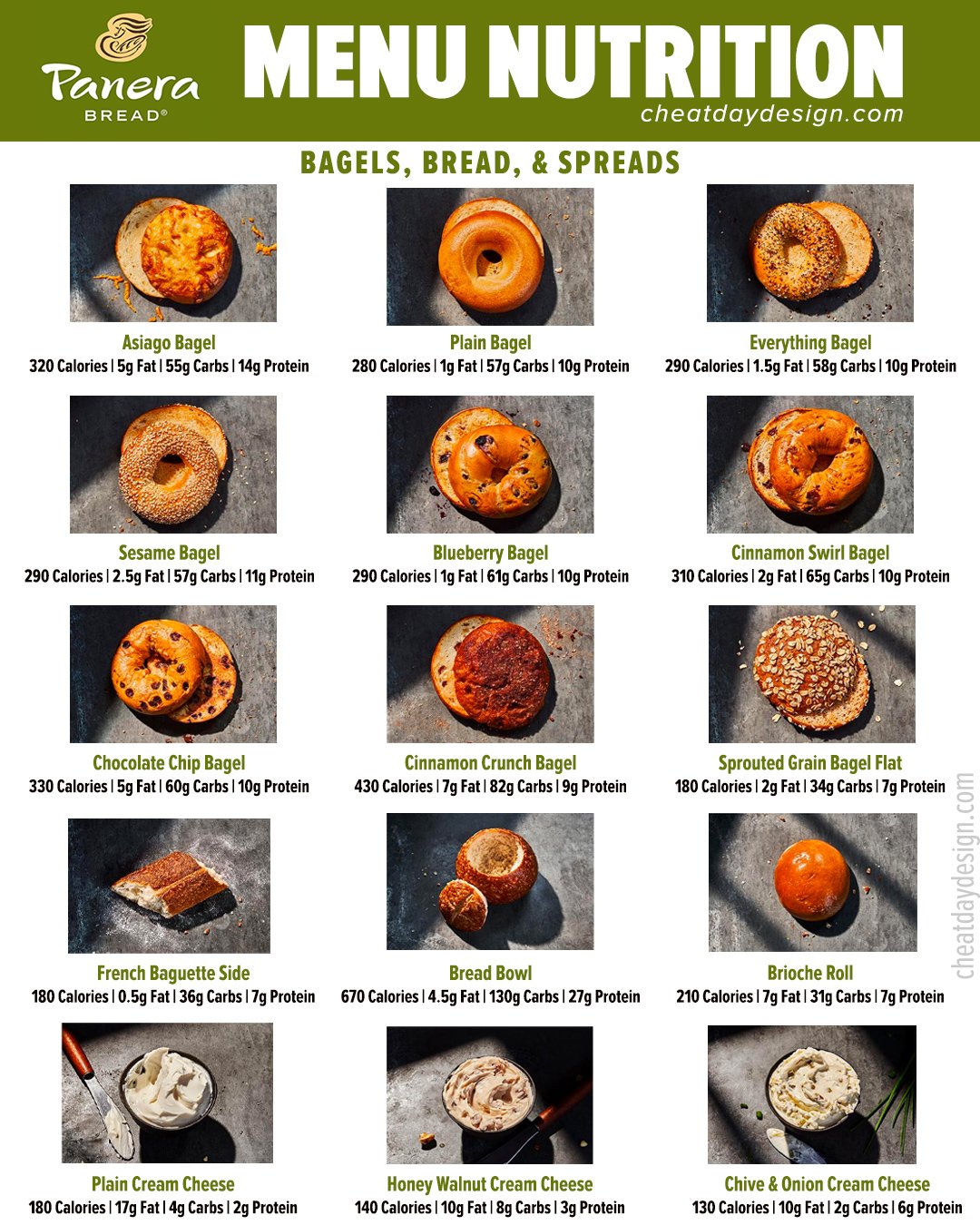 Whether you want to level up your breakfast sandwich or simply enjoy a bagel with cream cheese, Panera has lots of amazing bagel options to choose from!

While they’re most famous for their Cinnamon Crunch Bagel (check out my copycat recipe), they have a large variety of options. 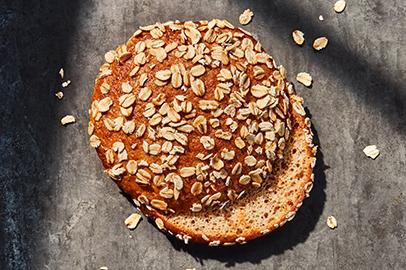 The bagel flats at Panera are similar to “Bagel Thins” you might have seen at the grocery store, and are a great option if calories are a concern. While a bagel flat may not be quite as filling as a full bagel, you’ll be saving 100+ calories. 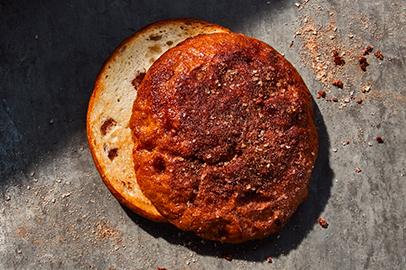 It should come as no surprise that the sweetest option is also the highest calorie. The Cinnamon Crunch Bagel is baked with cinnamon and vanilla chips and topped with a cinnamon-sugar coating, making it the highest in carbs as well. 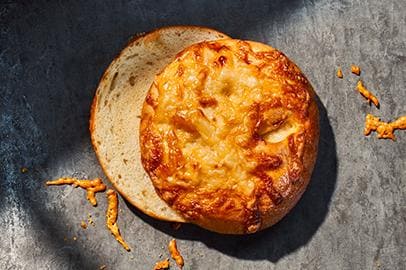 Bagel With the Most Protein

If maximizing protein is your goal, the asiago cheese bagel is the way to go. With a layer of asiago cheese baked on top of this bagel, it adds an extra kick of protein compared to other bagel options. 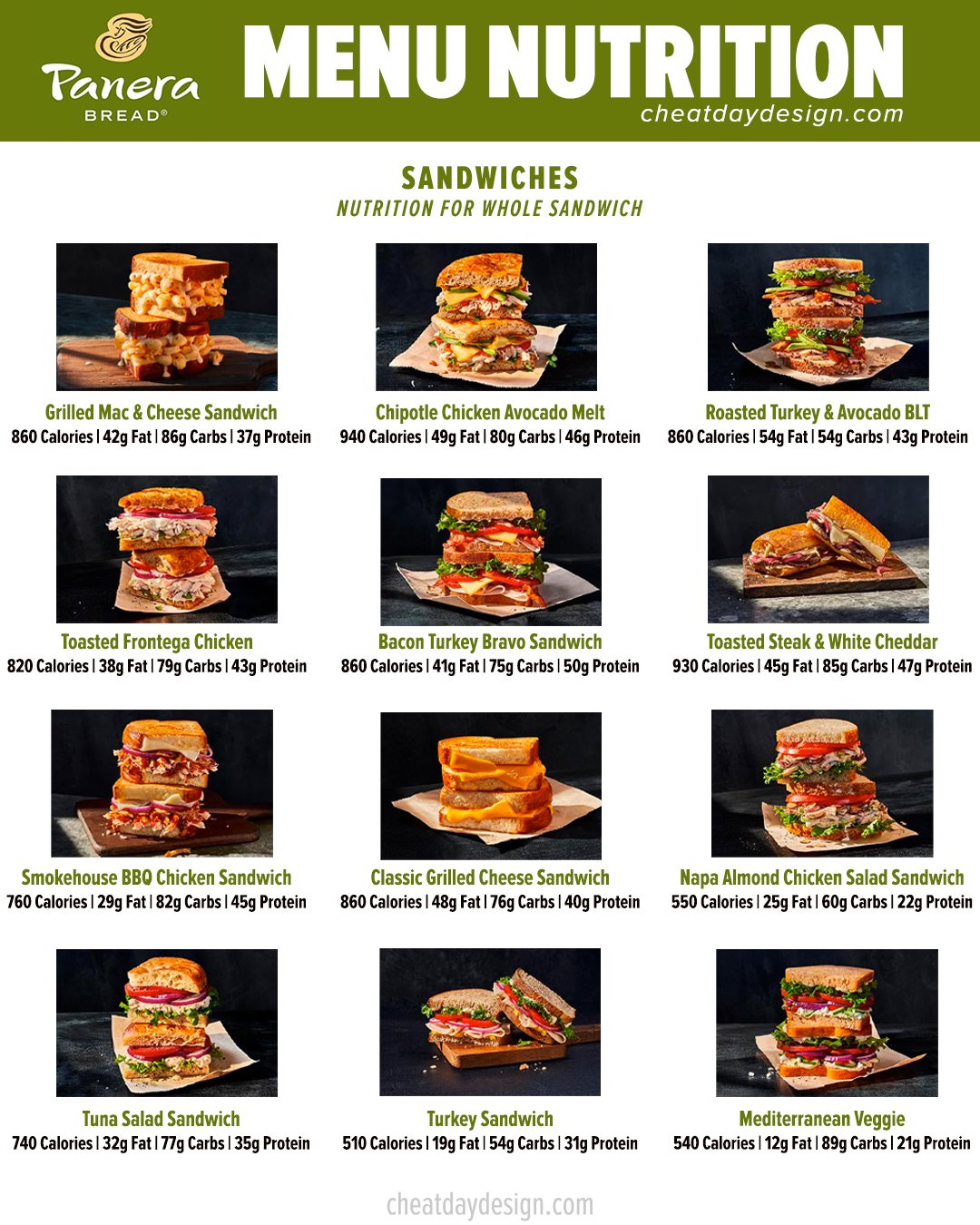 Bread is the glue that holds your sandwich together, and Panera has no shortage of sandwich options.

A popular way of ordering at Panera is the “you pick two” option, which allows you to choose half of a sandwich paired with either a cup of soup or half salad.

The nutrition listed here is for a full sandwich, so if you were to go with the “you pick two” option, you’d simply divide everything in half. 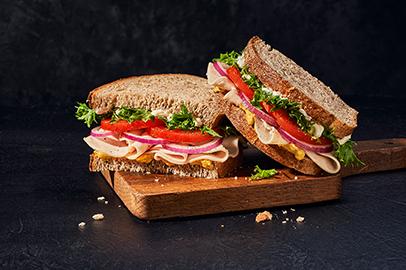 The turkey sandwich from Panera is one of the simpler menu items, and it’s not unlike a sandwich you may have eaten in grade school. Oven-roasted turkey breast is topped with lettuce, onion, and tomato, then spiced up with a little mayo and mustard.

The sandwich sounds delicious, but if you’re watching your calories, you may want to look elsewhere. Pulled chicken is combined with avocado, gouda, and chipotle sauce, then served on Black Pepper Focaccia. Sandwich with Most Protein

The Bacon Turkey Bravo Sandwich is one of Panera’s most popular options, and it is basically the turkey sandwich taken to the next level. By adding smoked gouda and bacon, the protein bumps all the way up to 50g! Keep in mind that this sandwich is not necessarily low-calorie, so while the protein count is impressive, it does come with nearly 900 calories. 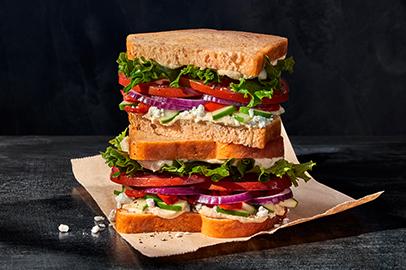 The Mediterranean Veggie Sandwich is one of my favorites at Panera, and it does not contain any meat. Fresh vegetables are combined with feta and hummus, and the Tomato Basil bread really takes it over the top. 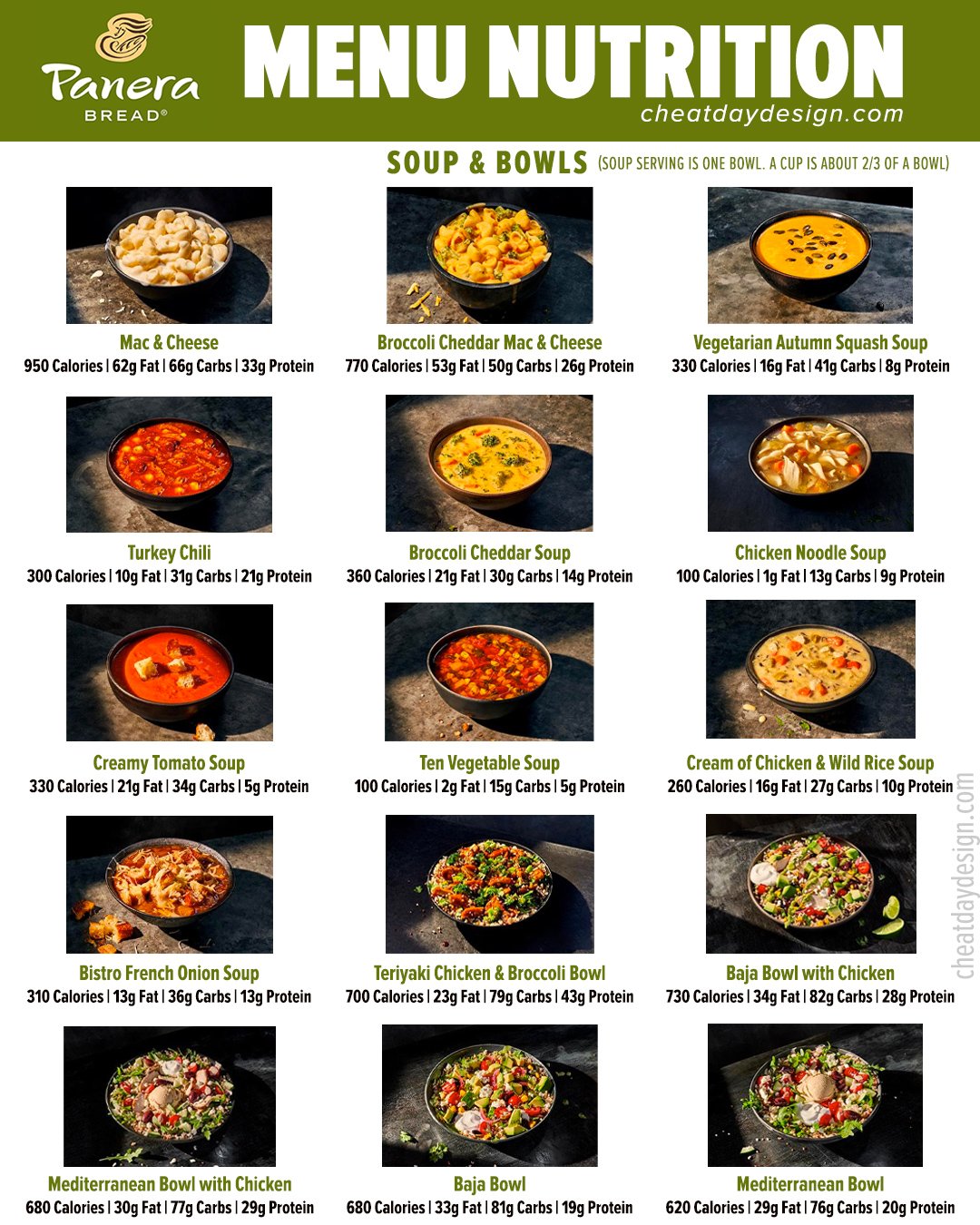 Nothing pairs better with a sandwich than a hot bowl of soup! Panera has a few rotating soups that will come and go with the changing seasons, but for the most part, they stick with the staples.

We’re including the mac & cheese here since it needs a place to live on this menu breakdown, but I won’t compare it apples-to-apples with soup, because it’s obviously higher in calories!

All of the nutrition listed here is for a bowl of soup (or mac & cheese), but you also have the option to order soup in a “cup” serving size. A cup is roughly 2/3 the size of a bowl for these purposes. 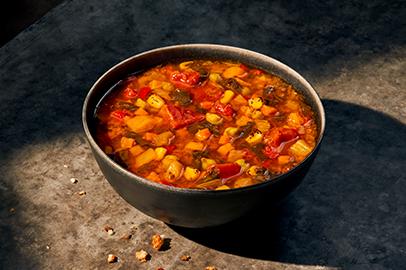 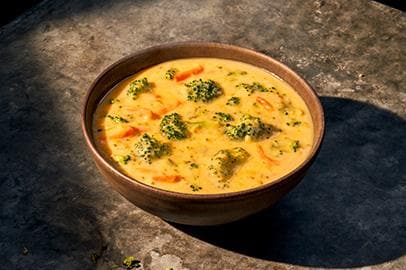 While this soup is certainly not high-calorie, it is technically the highest-calorie option on the menu, so it’s worth pointing out. It’s surprising to me that this soup contains more calories than the turkey chili, but that tends to be the case when the base of the soup is a cheese sauce. 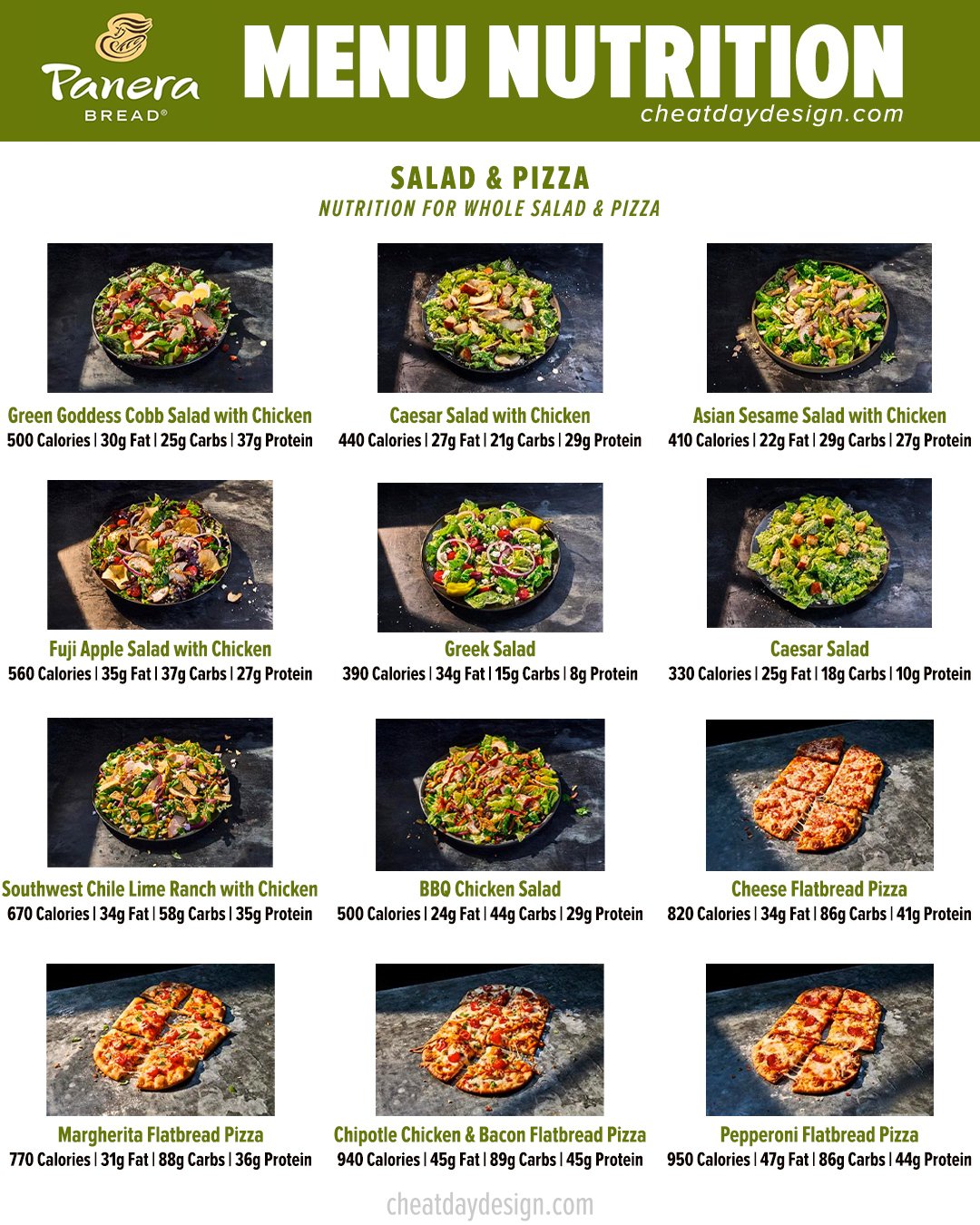 Just like the sandwiches, you have the option to order half salads at Panera if you want to go with the “you pick two” option.

In my personal opinion, the Fuji Apple Salad (with grilled chicken breast) is one of the best salads out there!

And it’s worth mentioning that I am including the flatbread pizza alongside the salad options, but of course, they are VERY different options! For the sake of keeping things concise, I included them here, but we won’t compare them directly to salads. 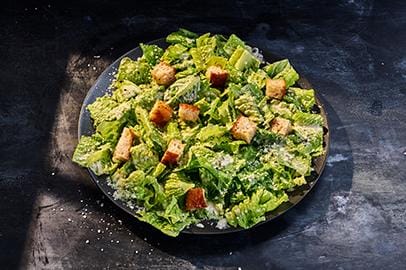 Are you surprised to see that the caesar salad contains fewer calories than the Greek salad? I certainly am! Any time you have a cream-based dressing, the calories tend to be very high, but that’s not the case here with just over 300 calories for this entire salad. 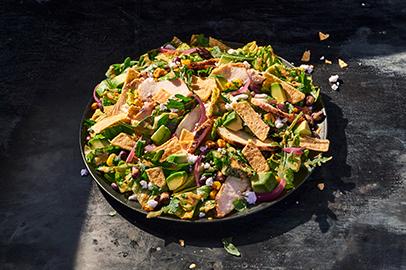 Thanks to the chile lime Rojo ranch dressing, avocado, and feta, this salad comes in the highest in the calorie department. While it is one of the higher-protein options with the addition of grilled chicken breast, that does some with some additional calories compared to other salad options on the menu. 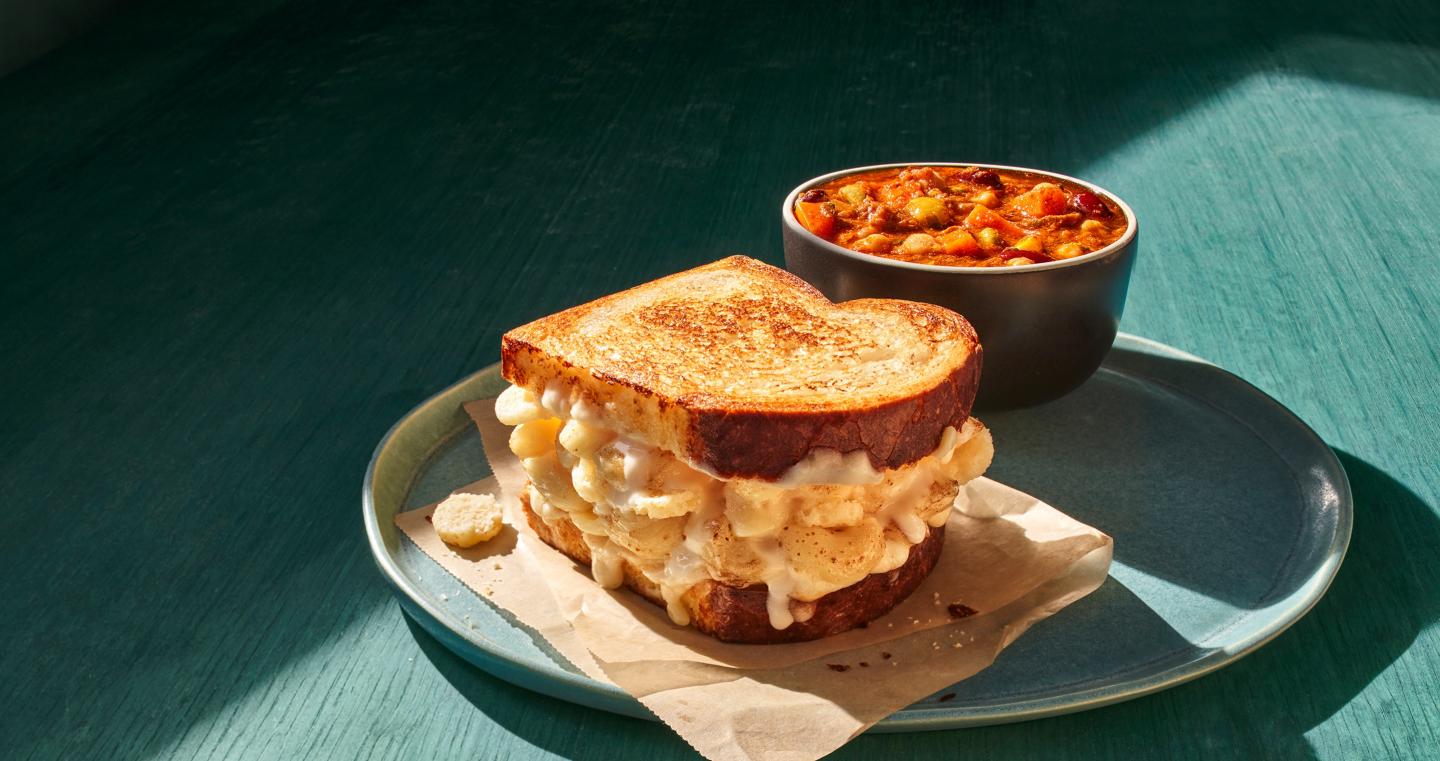 No matter what you order at Panera, there are plenty of swaps and substitutions you can make to save a few extra calories.

1) Swap the bread. When you order a breakfast or lunch sandwich, you can swap out the bread for any different type on the menu. If the ciabatta contains too many calories, you can go with a bagel flat instead!

3) Skip the heavy sauces. If you order a sandwich with mayo, ranch, or any other milk-based sauce, it’s going to come with a fair amount of calories. I typically will leave those off my sandwich and instead go with a much lower calorie condiment like mustard, hot sauce, or salsa.

4) Avoid the bread bowl. Don’t get me wrong, I think bread bowls are absolutely delicious, but they can add a ton of unwanted calories to your meal. If you order a soup that is 300 calories, but you have it in a bread bowl, that is going to add an additional 670 calories! That means your soup will now come in at nearly 1,000 calories.

5) Be mindful of your side choices. It’s not uncommon to pair your lunch with a French baguette or side of chips, but there are other side options available to you that may be more appealing, not to mention more filling. You can order an apple or banana, a fresh fruit cup, or Greek yogurt on the side for fewer calories.

6) Split your baked goods. Everything in the bakery at Panera looks unbelievable, so I don’t blame you if you want a chocolate chip cookie, muffin, cinnamon roll, croissant, or anything else with your breakfast. While there’s nothing inherently wrong with ordering these items, it’s worth it to be mindful, because a single chocolate chip cookie contains nearly 400 calories. If you want to give them a try, it might benefit you to split it with someone!

7) Take advantage of the “You Pick Two”. You Pick Two means choosing two options out of a half salad, half sandwich, or cup of soup. By having multiple smaller portions, we often eat slower, which in turn gives us a chance to realize we are full and to feel more satisfied. While I can easily finish a whole sandwich in about 2 minutes, if I have half of a sandwich with a small salad, I’m bound to eat much slower.

Final thoughts about the Panera Menu

If you’re looking to eat healthy on the go, Panera is a fantastic option.

Sure, there are certain menu items that may not support your dietary goals, but there is no shortage of substitutions and swaps you can make in order to create a meal that works for you.

Panera calories are on-par with many other restaurants out there, but based on our breakdown in this post, it’s clear that it completely depends on what you are ordering.

With fresh, quality ingredients, Panera is a great option for healthy eating, especially if you are on the road and in need of something quick.