One of the best items you can buy from Trader Joe’s is frozen hash browns.

If you’ve ever been to McDonald’s and have ordered a hashbrown patty, a Trader Joes hash brown is nearly identical. 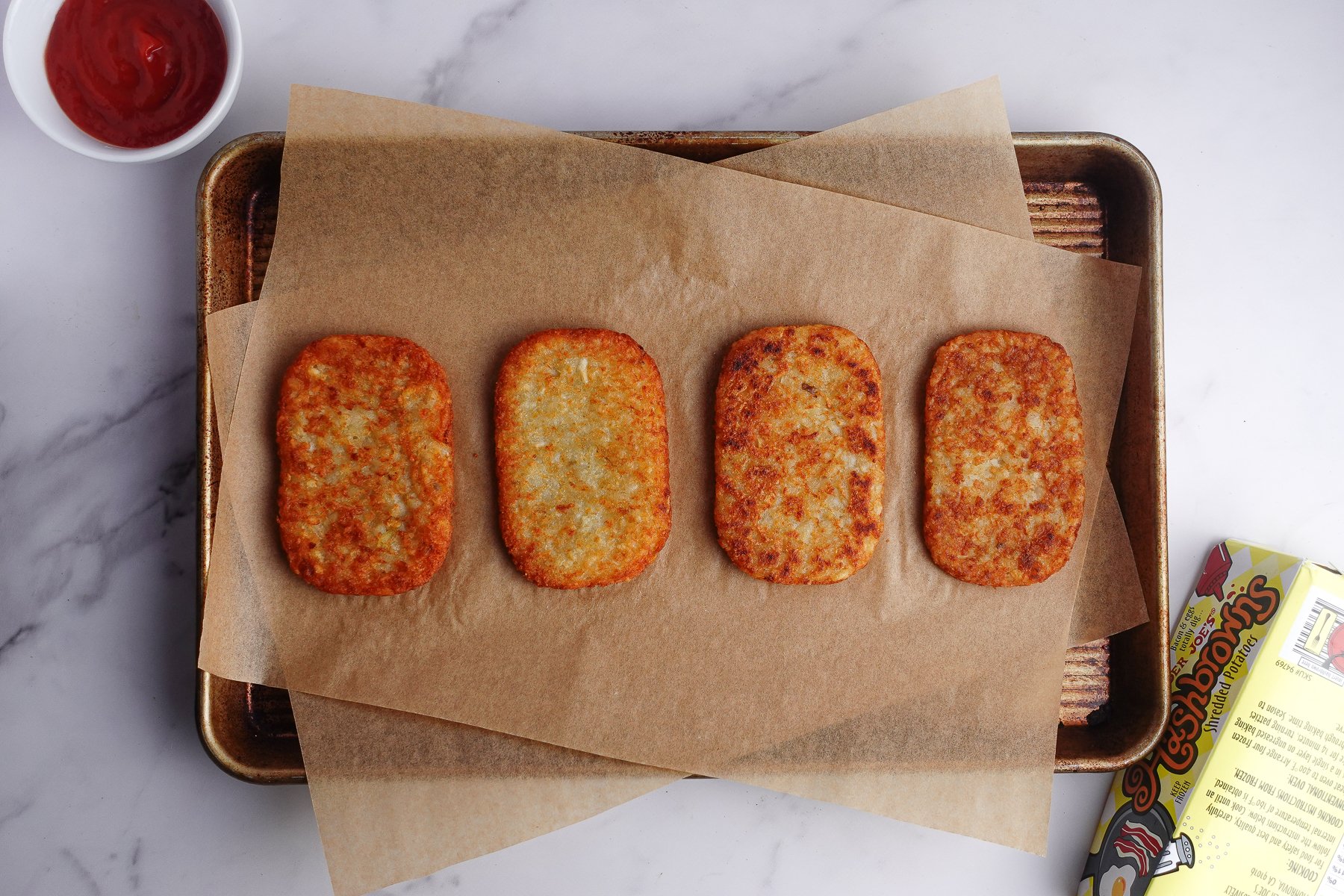 And with multiple different ways to cook these frozen potatoes, they’re one of the best and easiest additions to your breakfast.

Serve them up alongside bacon & eggs, pancakes, avocado toast, or any of your favorite breakfast foods and you’ll have one incredible breakfast.

While Trader Joes offers cooking instructions on the package, it’s very limited, so I want to present you with my 3 favorite ways to prepare these hashbrowns (and one way I definitely do not recommend).

If you’ve never experienced a hash brown patty, allow me to enlighten you.

Hash browns are my favorite way to elevate any breakfast dish, and the Trader Joe’s hashbrowns are my absolute favorite. 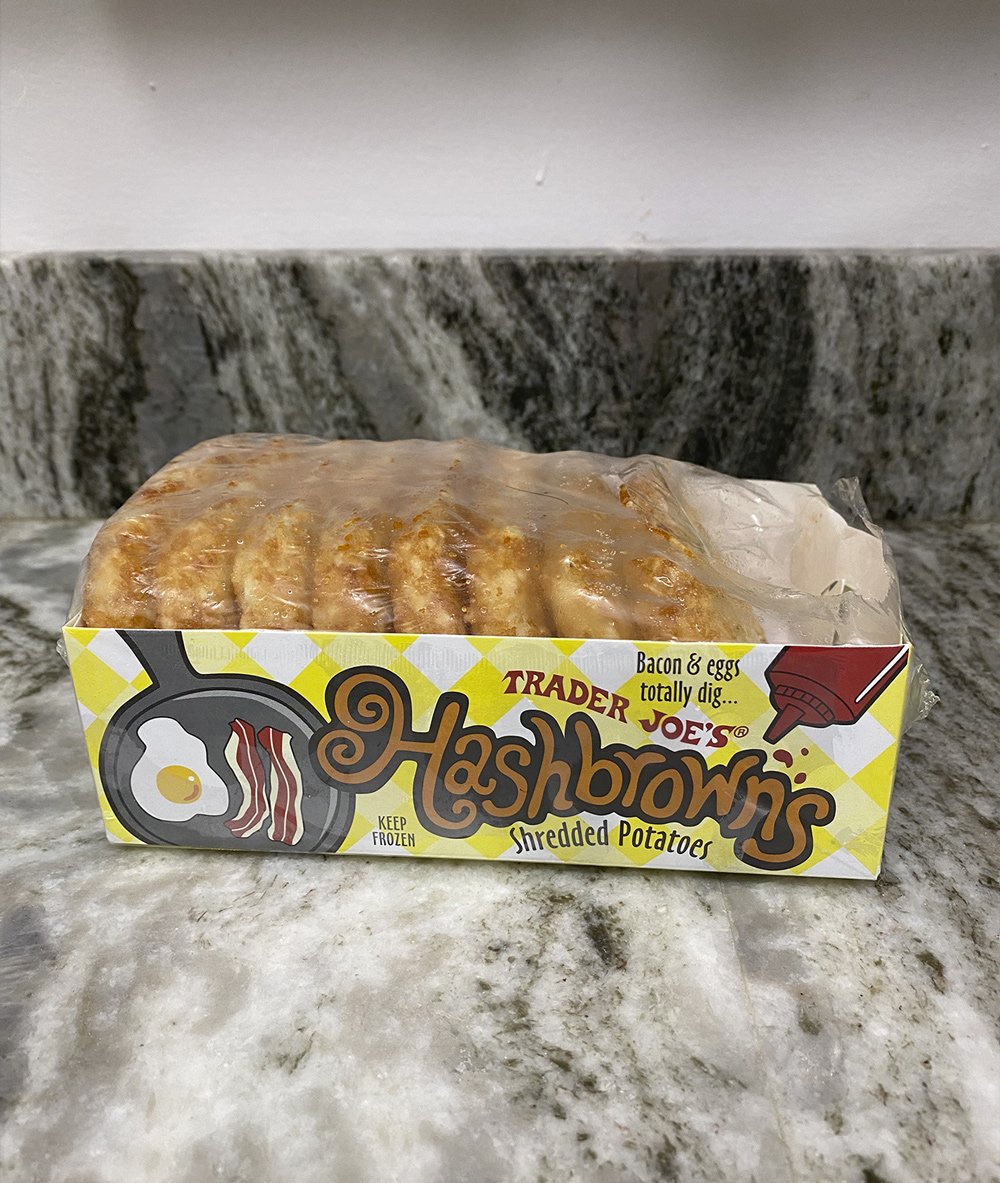 These frozen patties are made from shredded potatoes which are combined with oil to create hash brown patties that are ready to cook.

They end up tasting quite different from shredded hash browns thanks to the oil and salt that are added when the patties are formed.

The best part (outside of the great taste) is that they are ready to cook directly from frozen without any thawing necessary, making it a great option for a quick breakfast. 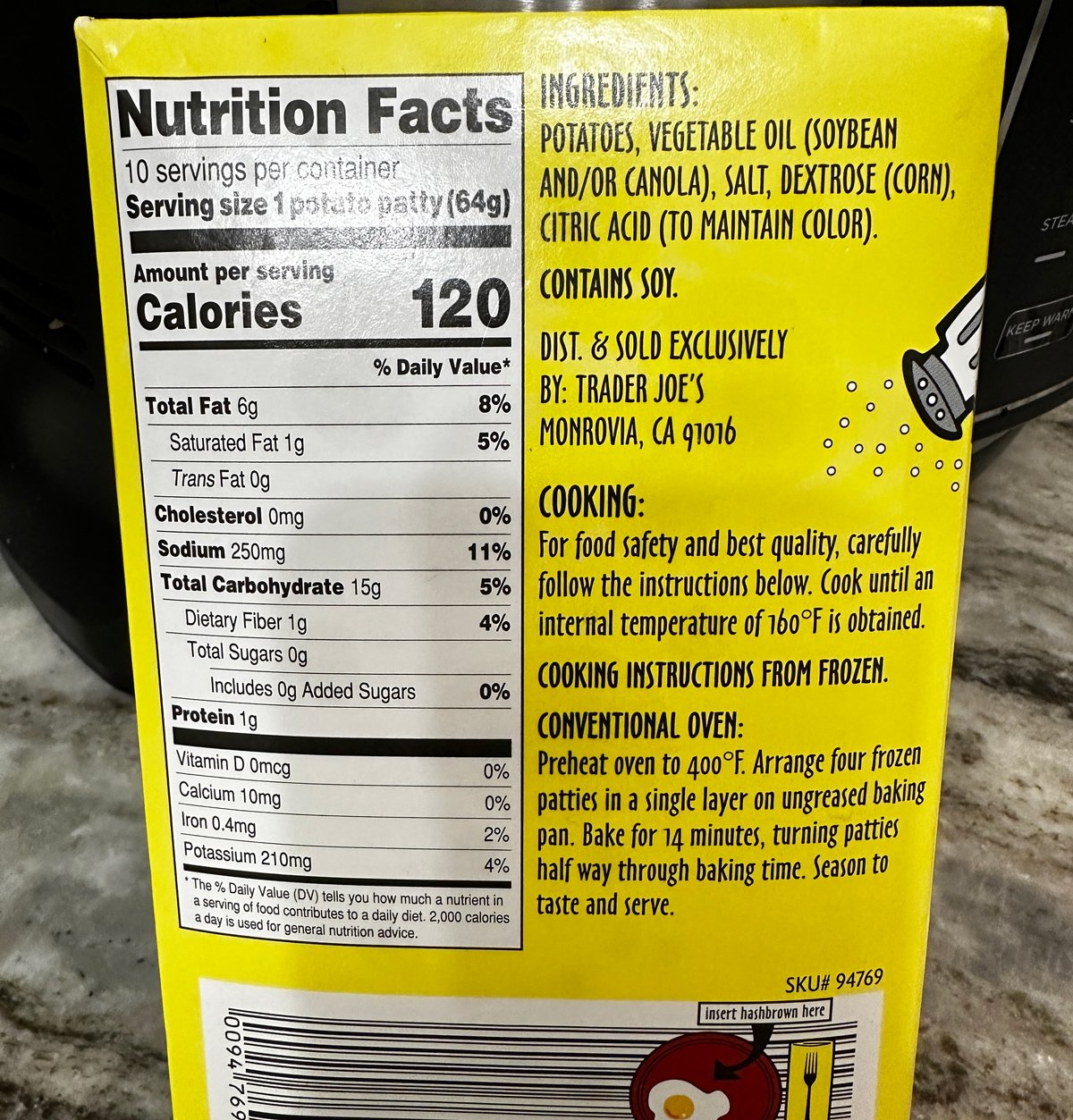 As you can see by the label, Trader Joe’s recommends baking these patties in a conventional oven. While that definitely works well, it’s actually not my favorite cooking method for Trader Joe’s hashbrowns…

To find out once and for all what the best cooking method for these hashbrown patties is, I decided to try 4 different methods. 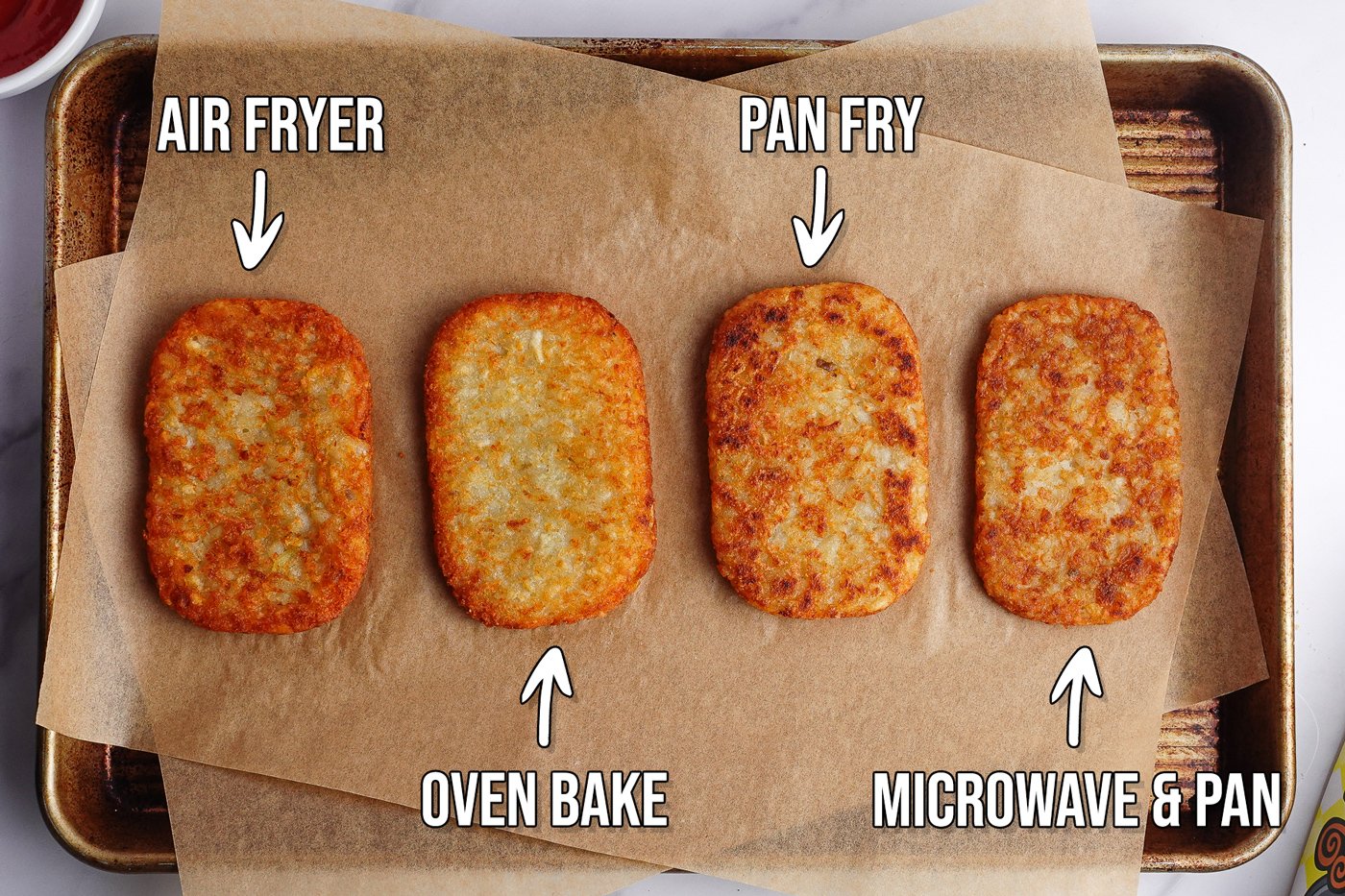 While they all look very similar, there were some major differences that gave me a clear-cut winner, so let’s run through them.

Cooking hashbrowns in the microwave

First up, I decided to test how the hashbrown patties would turn out using just the microwave.

While it’s easily the fastest method (the hashbrown cooked in about 1 minute) it is by far the worst. 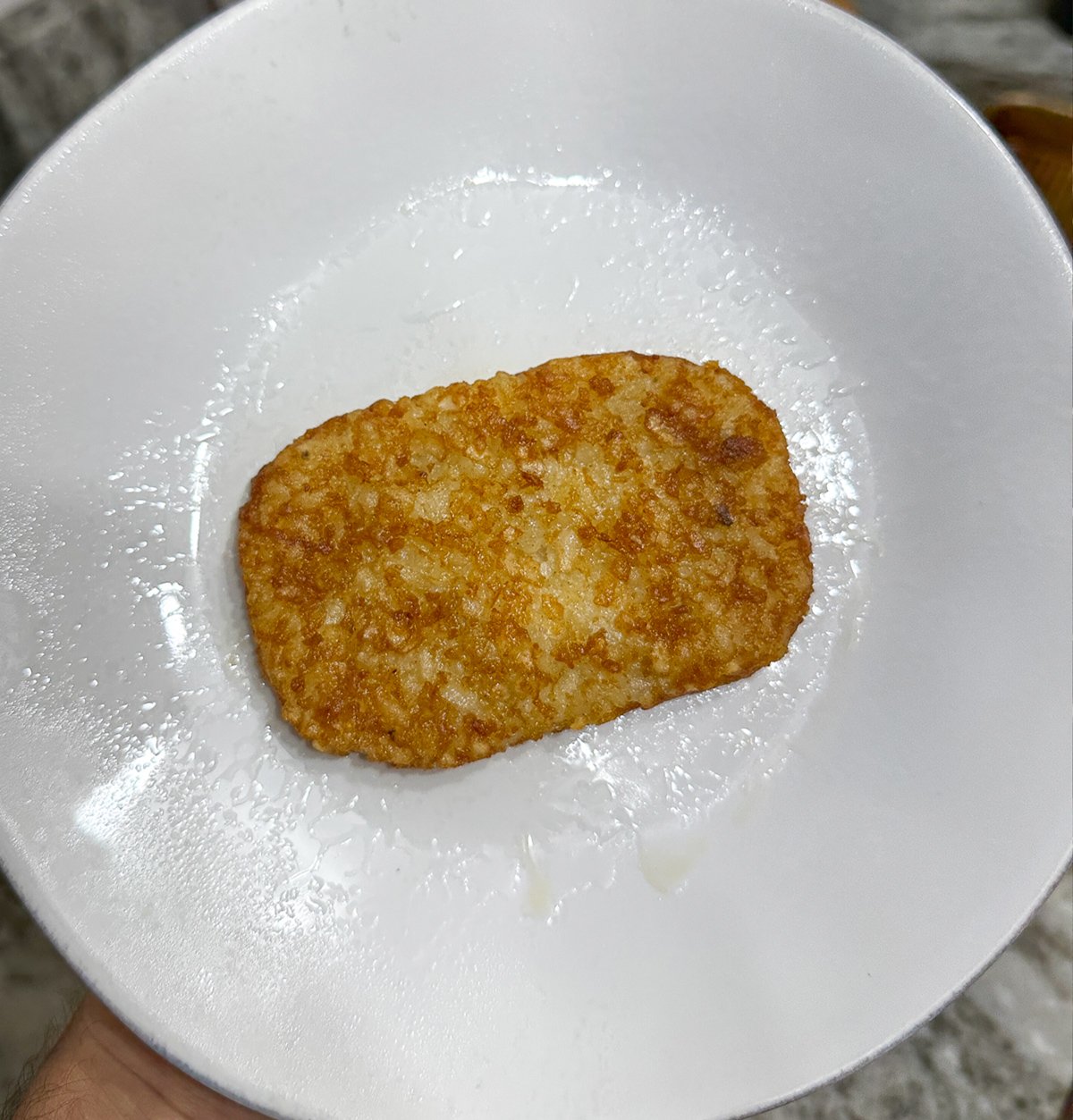 Since the Trader Joe’s hashbrown patties contain oil, they require some form of frying to allow the patty to crisp up.

By using the microwave, all that really happens is that we quickly thaw and heat the hashbrown, so it leads to an extremely soft & greasy hashbrown patty.

When you try to pick it up, it just falls apart on you. Definitely not what we want in a hashbrown patty.

To salvage this cooking method, I added the soft hashbrown patty to a hot pan and seared both sides for about 2 minutes to allow it to crisp up a little bit.

While it did in fact firm up a tiny bit and become more golden brown, this was still the softest of all the patties I tried, so I don’t necessarily recommend it.

Cooking hashbrowns in a frying pan

After microwaving, I gave pan frying a try. Since these hashbrown patties already contain oil, it doesn’t require adding any cooking oil or butter to the pan: just add the frozen patty to a hot pan and you’re ready to go. 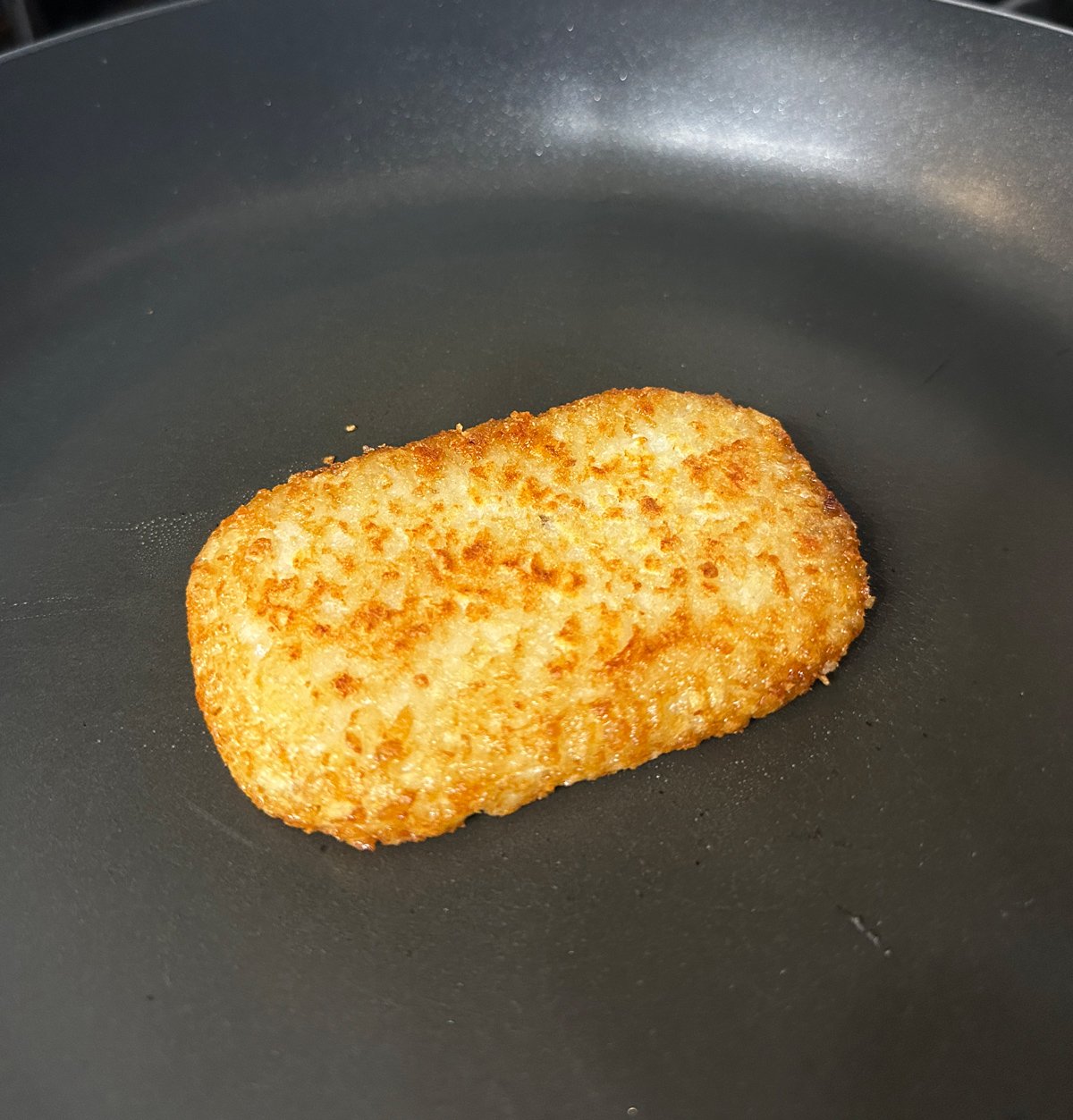 When you preheat a frying pan over medium heat, these hashbrowns take about 8 minutes to fully cook. I found that frying for 4 minutes per side lead to the best results, but the exact time can be adjusted based on how well-done you like your hashbrowns.

Anywhere from 6-10 minutes in total will work great.

While pan frying does leave you with a crispy hash brown patty, I’ve found that it becomes too easy to burn the patty with this method. When you compare this method to the others, this one stands out as the hashbrown that has the darkest color to it (the third hashbrown in the row):

I ended up pulling the hashbrown off the heat at the right time, but one more minute would have quickly burnt the hashbrown.

Since there’s such a fine line, I don’t prefer this cooking method, but it’s definitely an option, especially considering it’s relatively quick.

Cooking hashbrowns in a conventional oven

Trader Joe’s recommends cooking these hashbrowns in a conventional oven, and it’s easy to see why: it’s easy, hands-off, and you can cook all of the hashbrowns together.

I decided to try making 4 at a time, but you can easily cook the entire package if you have a large enough baking pan.

Again, since there is already oil within these patties, you do not need to worry about using any cooking oil or parchment paper. Simply line the hashbrown patties in a single layer and bake them at 400 degrees for about 15 minutes, flipping each patty halfway through.

Baking these hashbrowns is a great way to achieve crispy hashbrowns, and I don’t blame Trader Joe’s for recommending this method.

Plus, you can easily add a few extra minutes to the cooking time to achieve extra crispy hashbrowns without running the risk of burning them easily like with the frying pan method.

But even with this being a great cooking method, it’s still not my favorite. There’s one cooking method that takes the cake for me…

Cooking hashbrowns in the air fryer

Air fryer hash browns are hands-down my favorite cooking method. In fact, I have an entire post dedicated to just that, since they’re one of my favorite air fryer recipes. 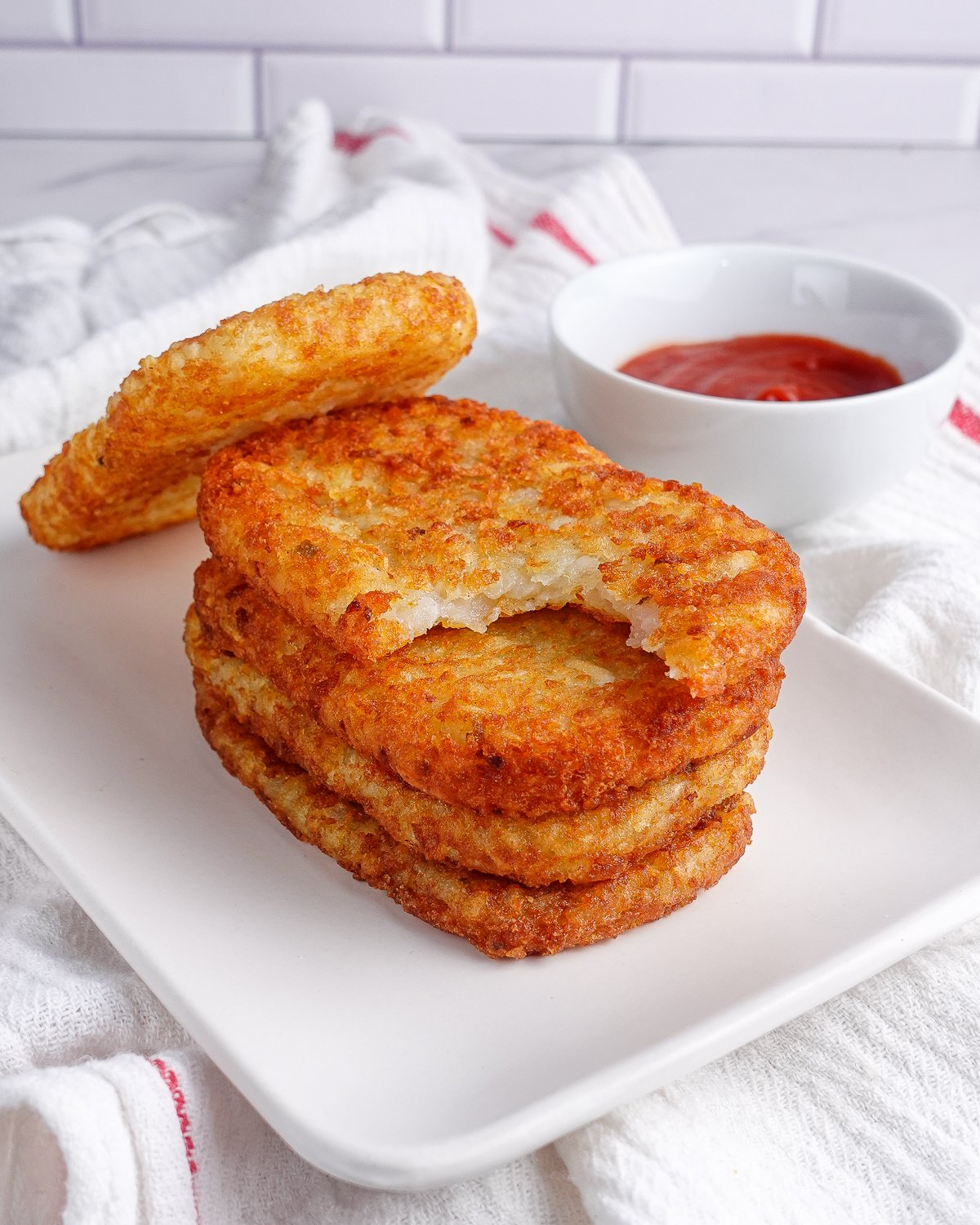 If you want a super crispy hashbrown that tastes like it just came out of a deep fryer, the air fryer is the way to go.

With other cooking methods, the outside tends to get a decent crisp, but the interior remains relatively soft.

The air fryer gives you an awesome crisp throughout, and in my eyes, it’s not even close.

As far as cooking time goes, the air fryer requires slightly more time than pan frying, but it takes less time than a conventional oven.

Preheat the air fryer for a few minutes, then place your frozen hashbrowns in the air fryer basket in a single layer (you don’t want to stack the hashbrowns or they will not crisp up evenly).

I have a Ninja Foodi that allows me to cook 4 at a time, but if you have a larger air fryer basket you’ll be able to cook a larger batch. 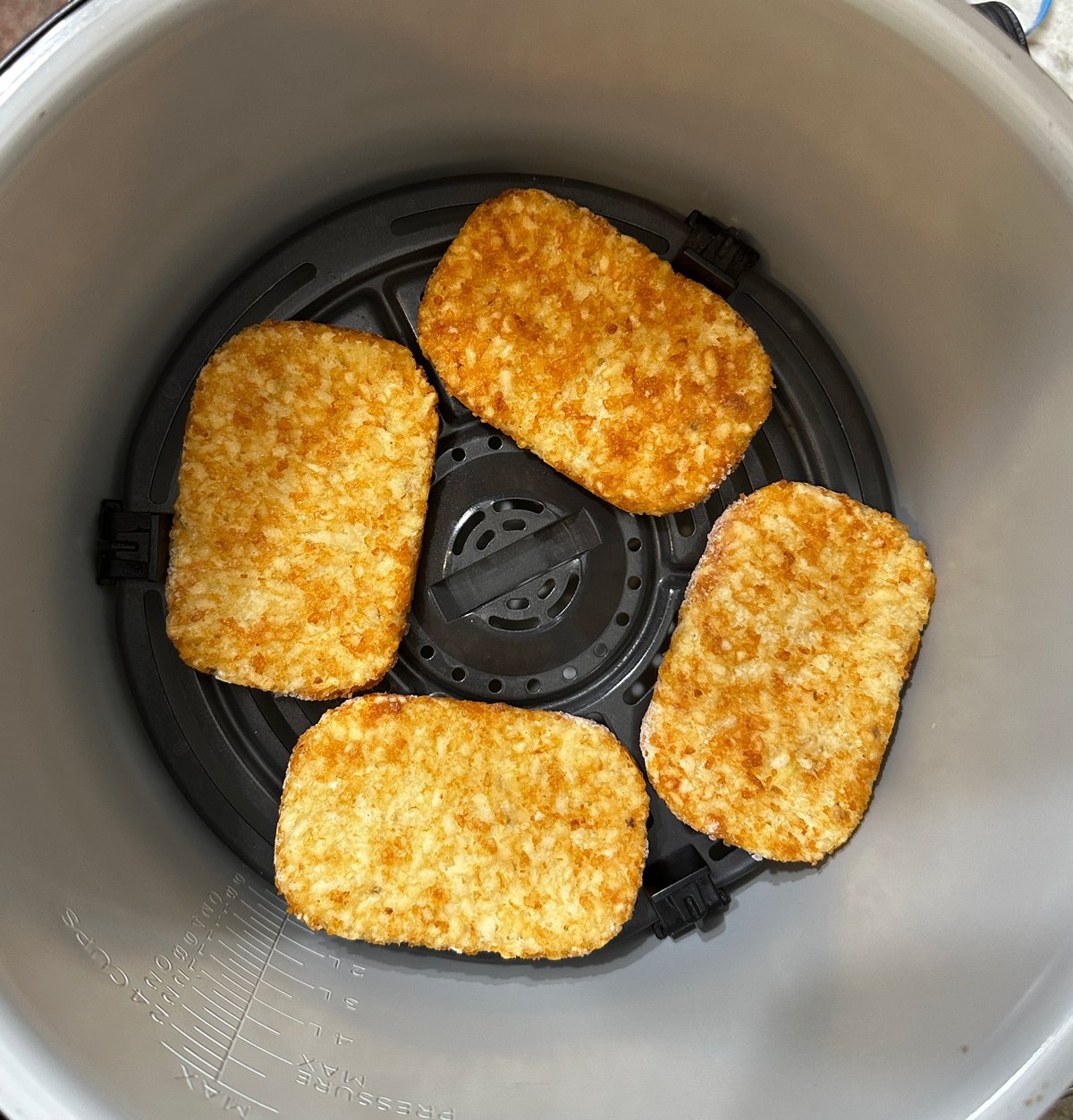 Air fry at 400 degrees for about 12 minutes, flipping the patties halfway through.

If you prefer extra well-done hashbrowns, you can air fry for an additional couple of minutes, but I find 12 minutes to be the perfect amount of time. 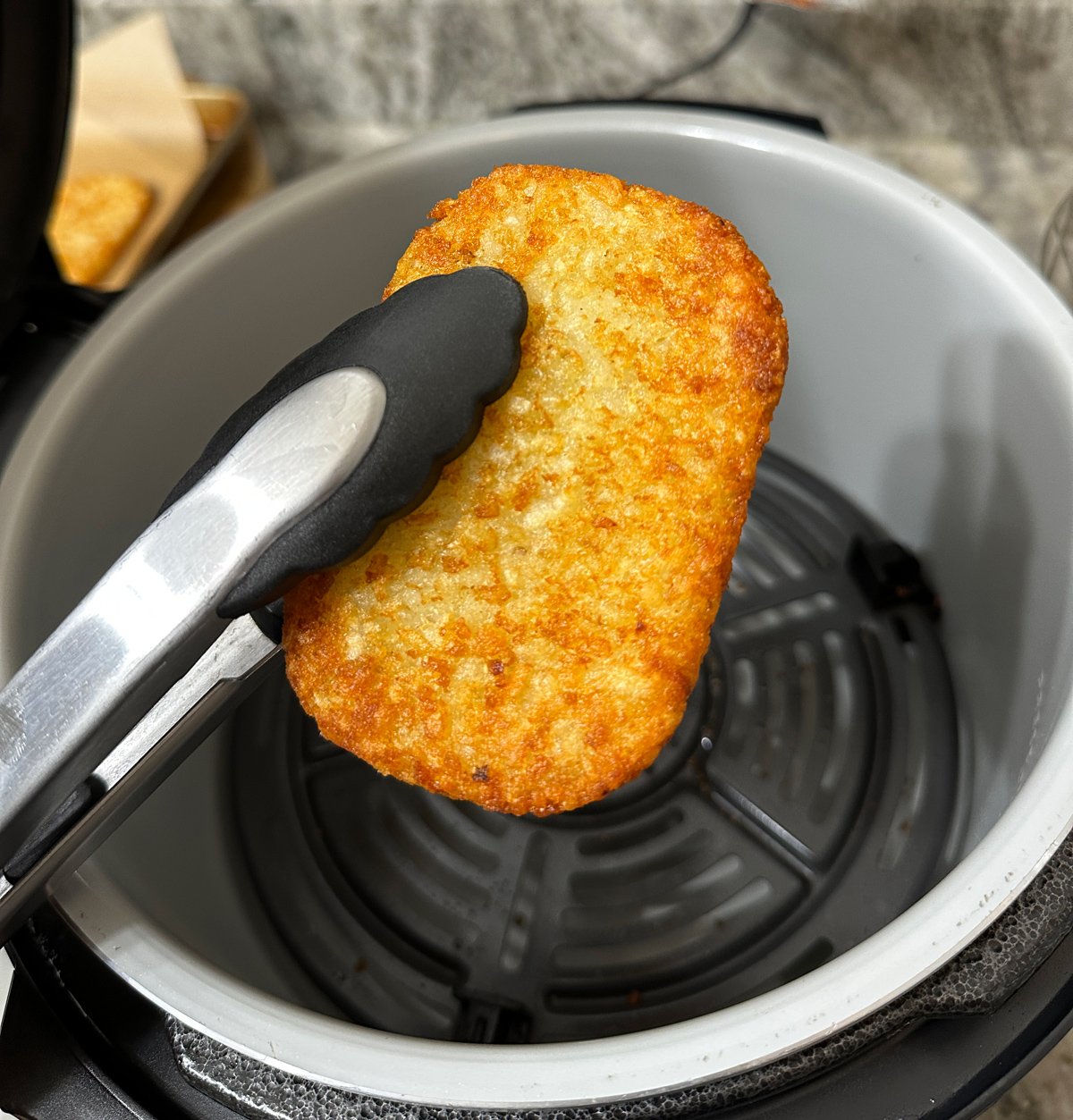 When you grab the hashbrown patty with a pair of tongs, you’ll immediately feel just how light and crispy it is.

Plus, the air fryer allows the excess oil to cook off, meaning you won’t be left with a greasy hashbrown patty. 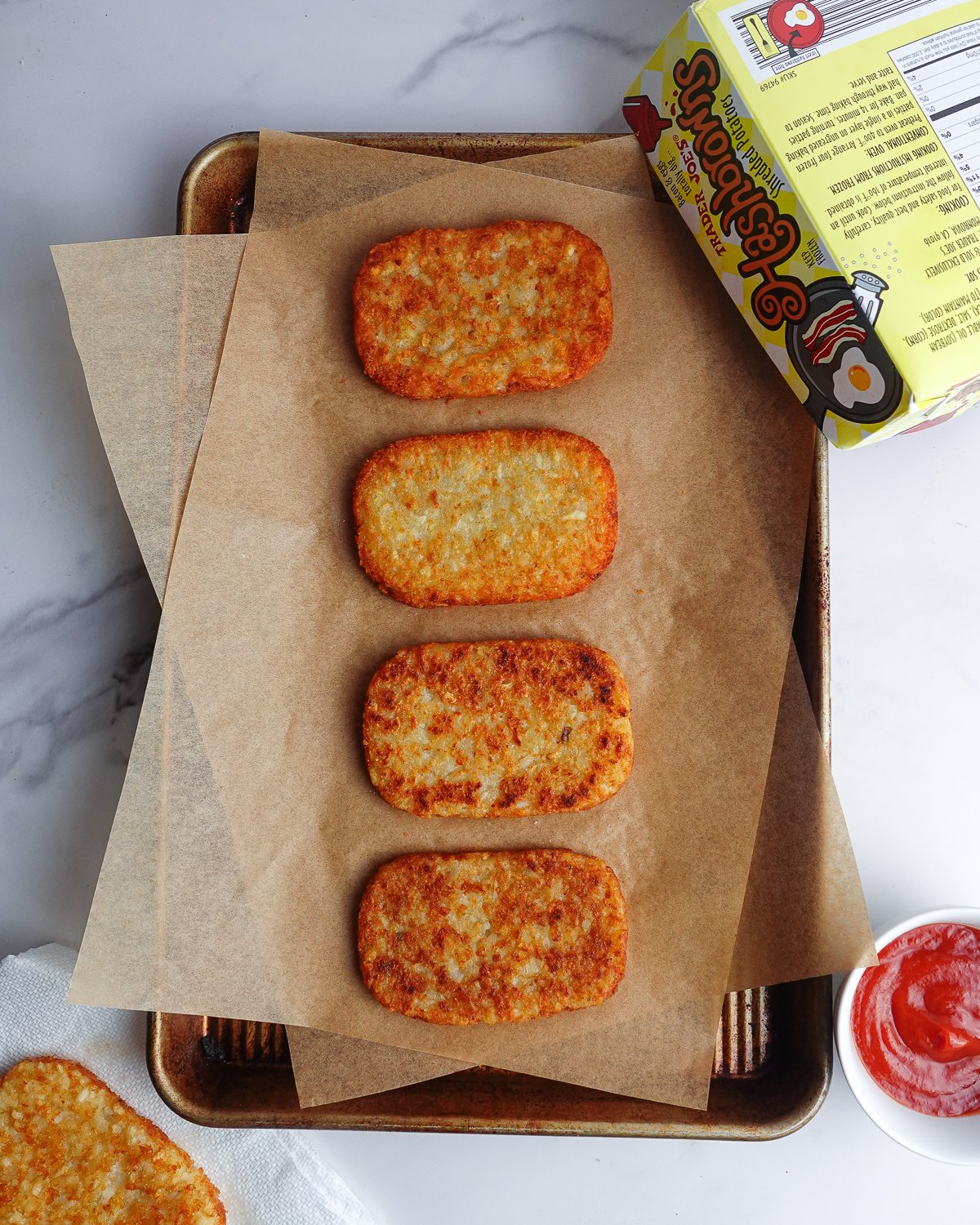 Ultimately, any of these cooking methods for Trader Joes hashbrowns works, but the air fryer always produces the best results for me.

If I had to rank the various cooking methods, this would be it:

If I had to rank my favorite type of frozen potato, I don’t think I could do it, but these are certainly up there with fries and tater tots.

How to deal with excess oil

Depending on the cooking method you choose, you may find your hashbrown patties to be greasy. While some people may not mind that, I definitely do not enjoy it.

If your hashbrown is greasy, simple dab the top with a paper towel, or allow the hashbrowns to rest on paper towels to soak up excess grease the same way you do with cooked bacon. 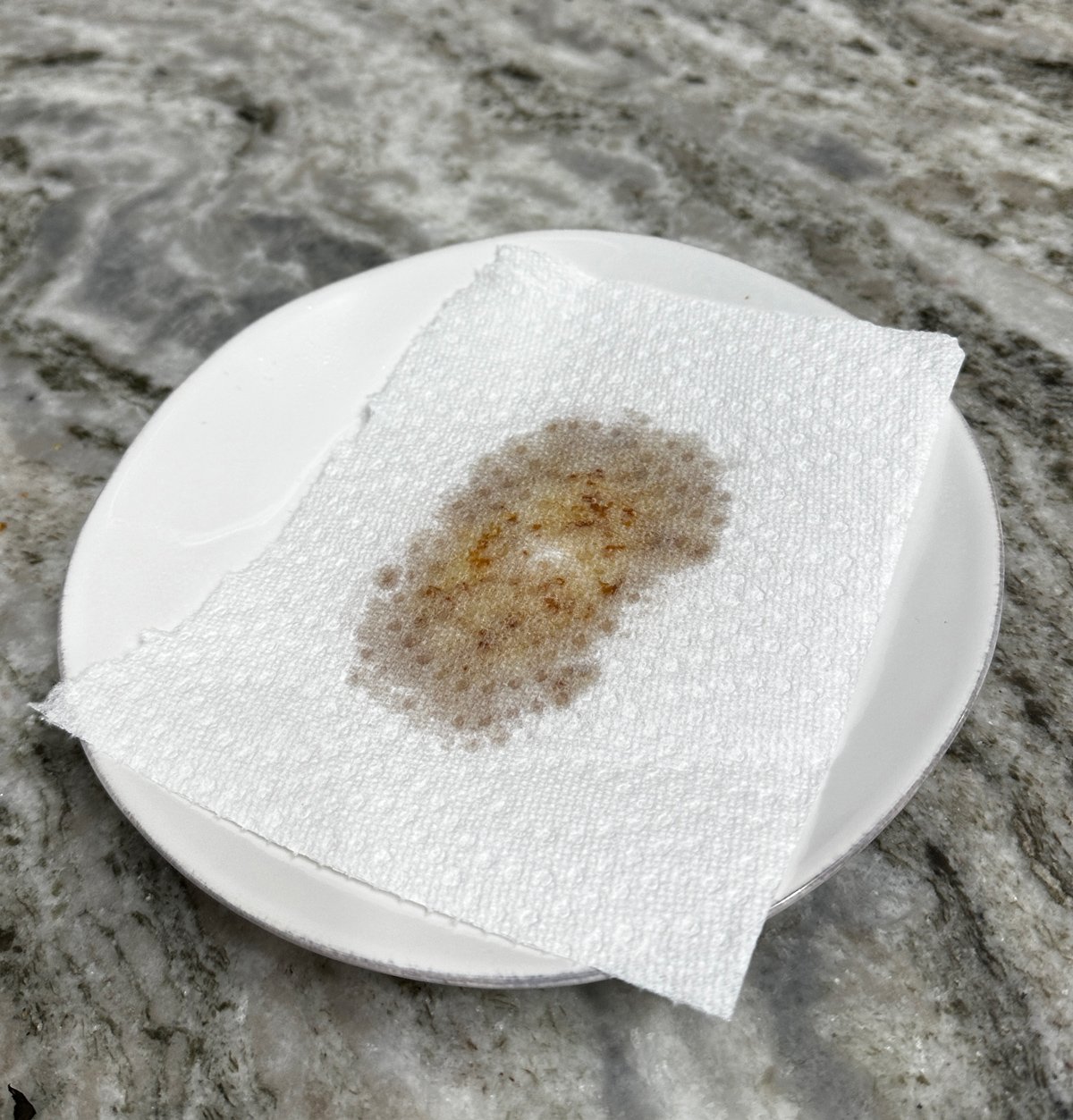 If you cook your hashbrowns in the air fryer or the air fryer, you shouldn’t run into this issue. But if you pan fry or use the microwave for a quick thaw, you’ll likely run into some extra grease, so this simple trick should save you.

Some of my other favorite items from Trader Joe’s

To say I’m obsessed with Trader Joe’s would be an understatement. But then again, who isn’t?

I love using Trader Joe’s products in recipes and walkthroughs, so here are some of my other favorites: