Everybody loves Taco Bell’s Cinnamon Twists, but did you know you can make them easily at home?

Since we’re all about healthy recipes around here, we’re going to make these in the air fryer instead of deep-frying! Not only does that save some calories, but it also makes this recipe extremely easy with no deep fryer required.

In fact, you can have a batch of Taco Bell Cinnamon Twists ready to go in under 5 minutes! 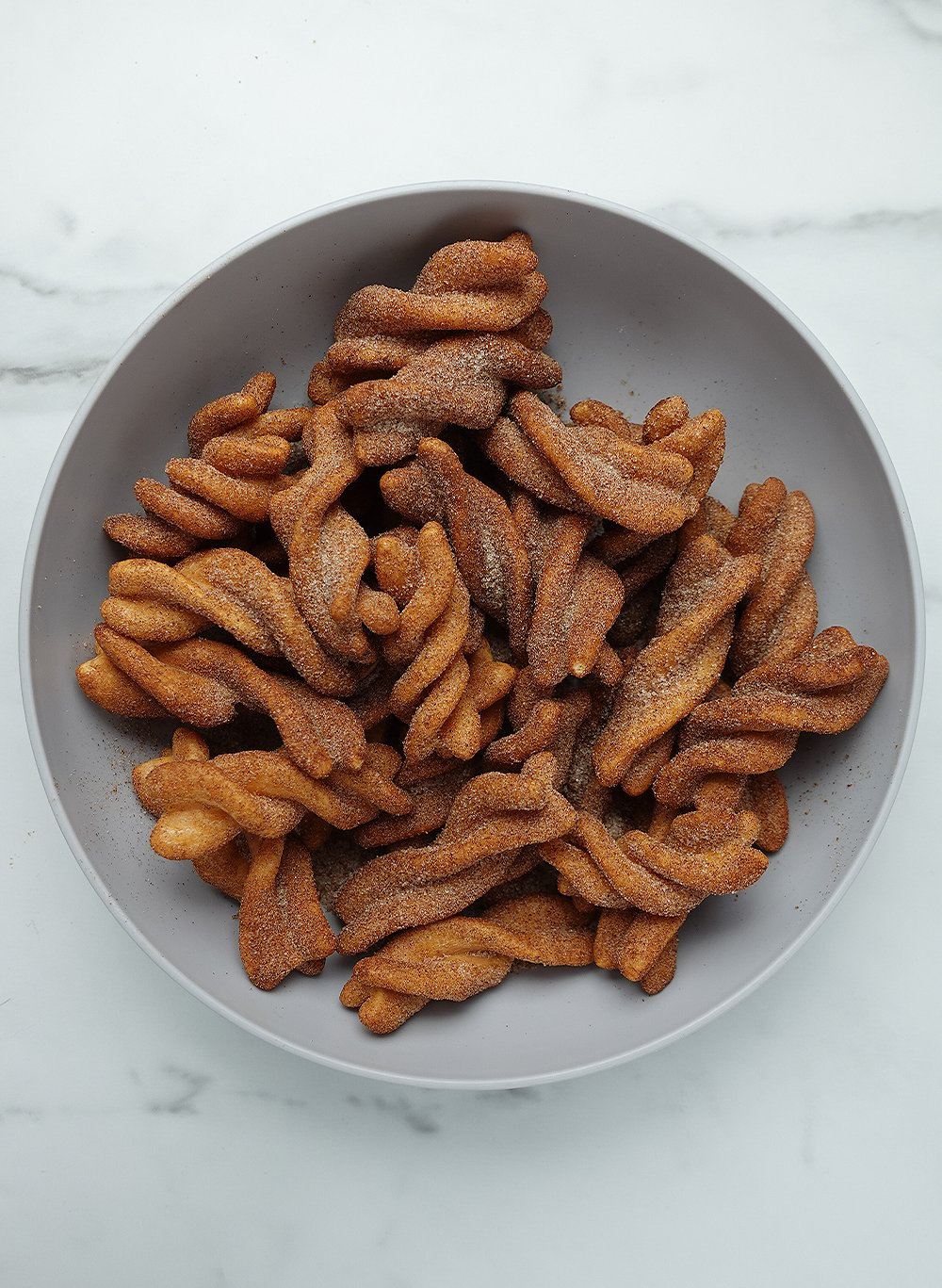 These cinnamon twists are light & airy, yet still just as crunchy as you’d hope them to be.

Since we’re not deep frying these cinnamon twists, a large batch actually has fewer calories than the original Taco Bell Cinnamon Twists: 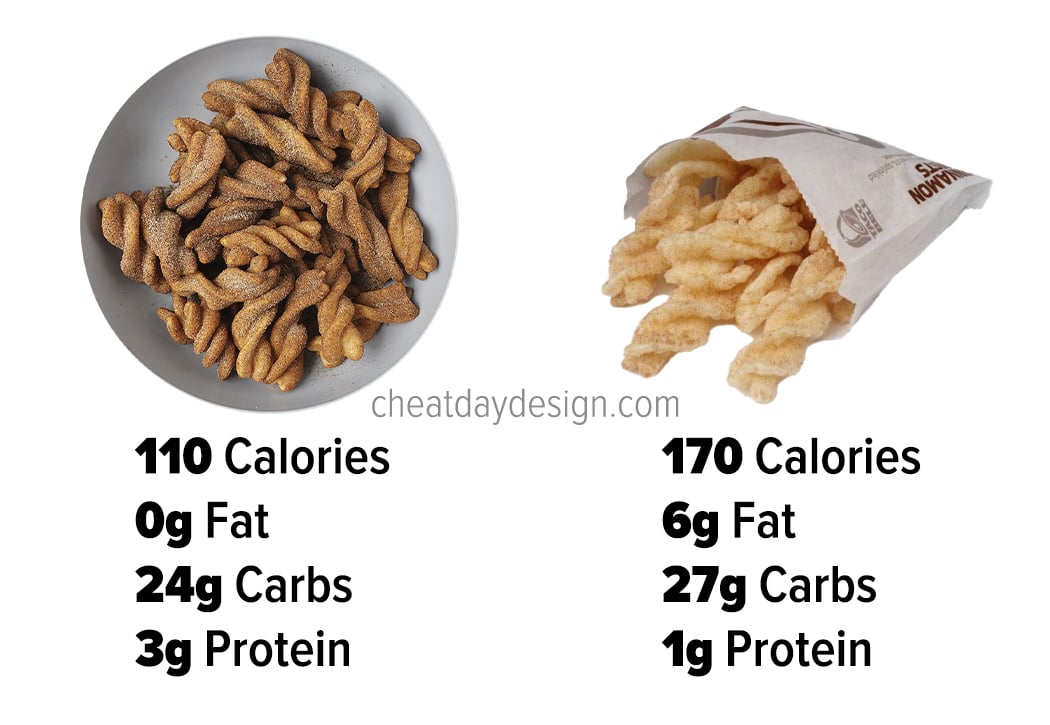 With just over 100 calories per serving, these make a fantastic snack for anybody.

What are Taco Bell cinnamon twists made out of?

When it comes to fast food dessert, Taco Bell‘s Cinnamon Twists sit at the top of my list. But what exactly are they?

Cinnamon twists might look like pasta, but they’re actually different. If you take rotini pasta (the twisty noodle) and air fry it, you’ll end up with the once-famous “Tiktok Pasta Chips“, but they will not puff up at all.

To make cinnamon twists, you need to use Duros, otherwise known as Mexican Wheat Twists.

According to my quick Wikipedia research, you may also find them called Duros de harina, duritos, durros, pasta para durito, chicharrones, or churritos.

No matter what you call them, they’re Mexican pasta made from wheat flour that puffs up once cooked, which is very different from any wheat pasta we are used to. 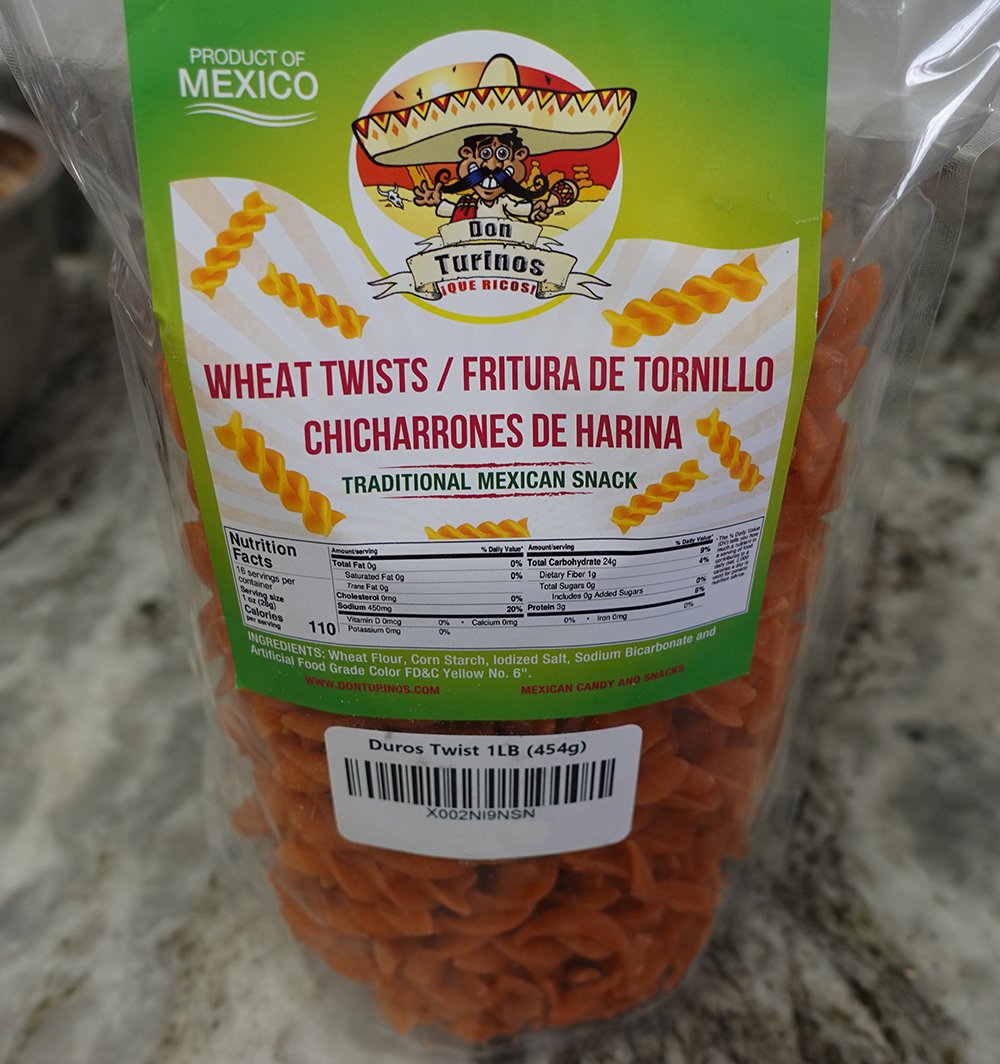 I had never heard of these before, but they are the secret ingredient to making authentic cinnamon twists.

Authentic Duros are often seen as a pinwheel shape and are most commonly seasoned with chili and lime. Obviously, that’s not the case here- we’re not trying to make authentic Duros, but rather mimic the Taco Bell menu item as closely as possible.

Now, I need to set the proper expectations here. These aren’t going to taste exactly like Taco Bell’s Cinnamon Twists.

Taco Bell uses a very specific type of wheat twist that is made exclusively for them. When you purchase these wheat twists (either from a local Mexican market or from Amazon) they’re going to have a very distinct flavor to them.

Wheat twists have an almost savory flavor to them that will come through in the final product. Don’t get me wrong, the final cinnamon sugar result is still delicious, but there’s a very distinct flavor that will make these slightly different from Taco Bell Cinnamon Twists.

But hey, it’s a small price to pay for such a quick & easy recipe.

How to make Taco Bells Cinnamon Twists in the air fryer

Unlike other recipes, such as my Churro Bites or Crispy Chicken Sandwich, we’re not going to preheat the air fryer here.

We want this recipe to be as easy as possible, so all we need to do is add the wheat duros to the air fryer basket, plug it in, and let it work its magic.

I add 2oz (56g), which is 2 servings, of the wheat twists to the air fryer basket at a time. Since they’re going to puff up, I want to leave plenty of room to make sure they all fully crisp up.

As you can see here, the small amount ends up expanding to fill the air fryer basket.

All we need to do to make these cinnamon twists is air fry at 400 degrees F for 4 minutes.

These wheat twists will completely puff up and become light & crispy in only 4 minutes, no spray or oil required. 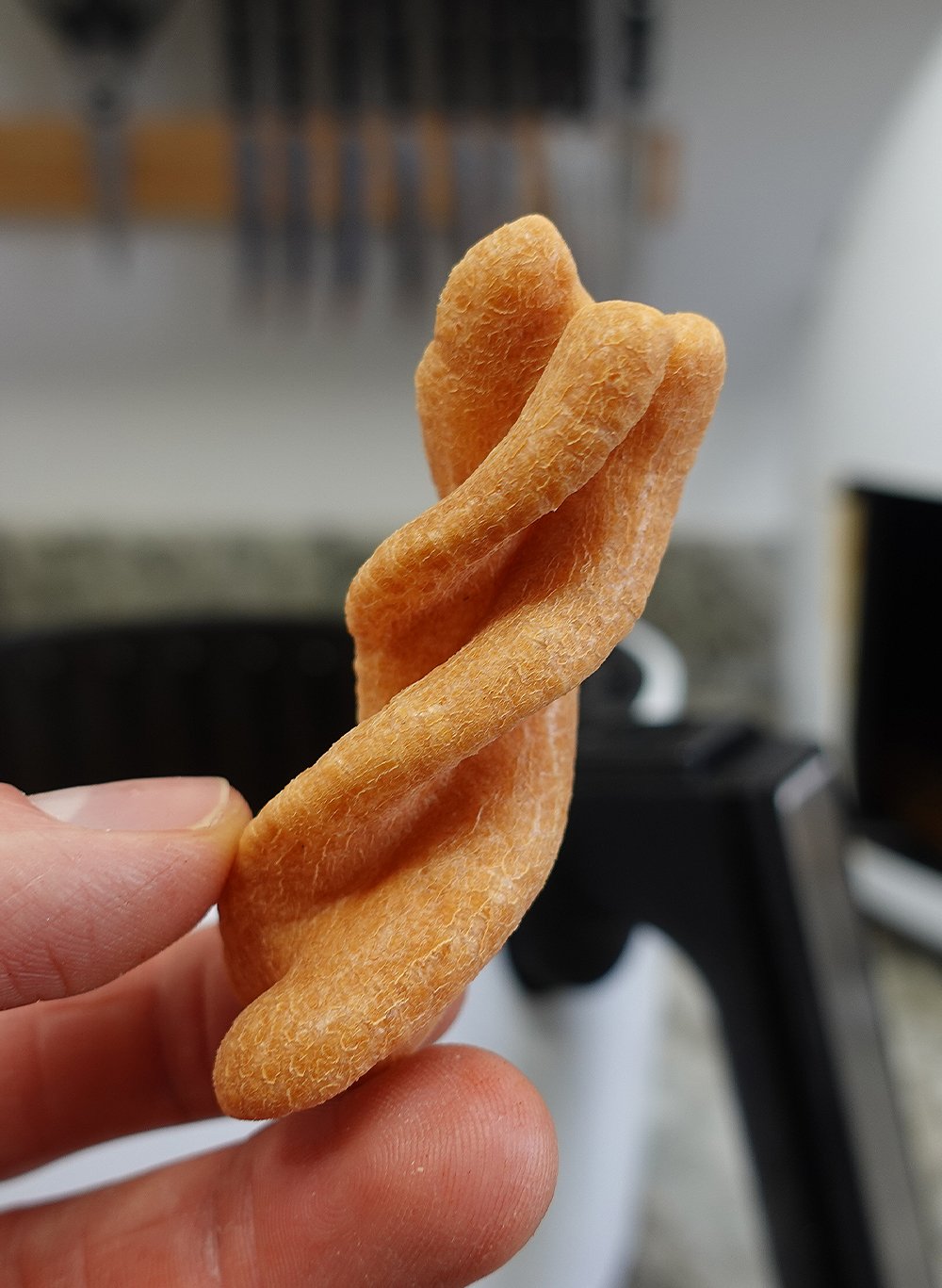 Right out of the air fryer, you’ll be able to do a little taste-test to make sure the texture is correct. If the cinnamon twist is undercooked, they will be slightly chewy.

You’ll know they are ready when they resemble a cheese puff texture!

4 minutes was the perfect length of time for me, but if you overcrowd the air fryer basket, you’ll need more time.

After 4 minutes, generously spray the cooked duros with cooking spray. Since we are not cooking these with any oil, this is the only way to get the cinnamon sugar mixture to stick. 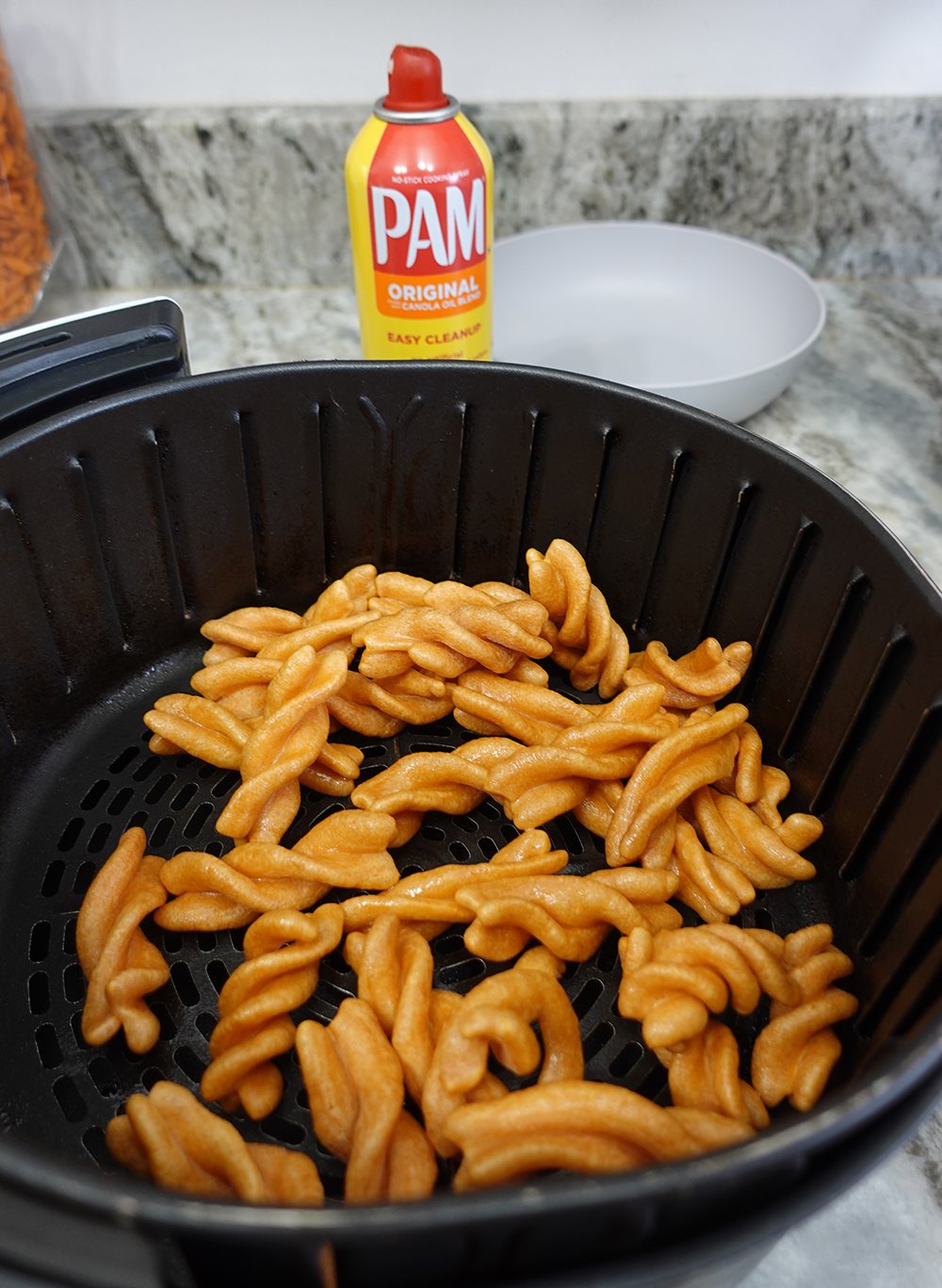 Don’t be shy about the spray, either. I tested numerous times, and these twists stay very crispy even once covered in spray.

Immediately transfer your twists to a large bowl with a cinnamon-sugar mixture and toss to coat. 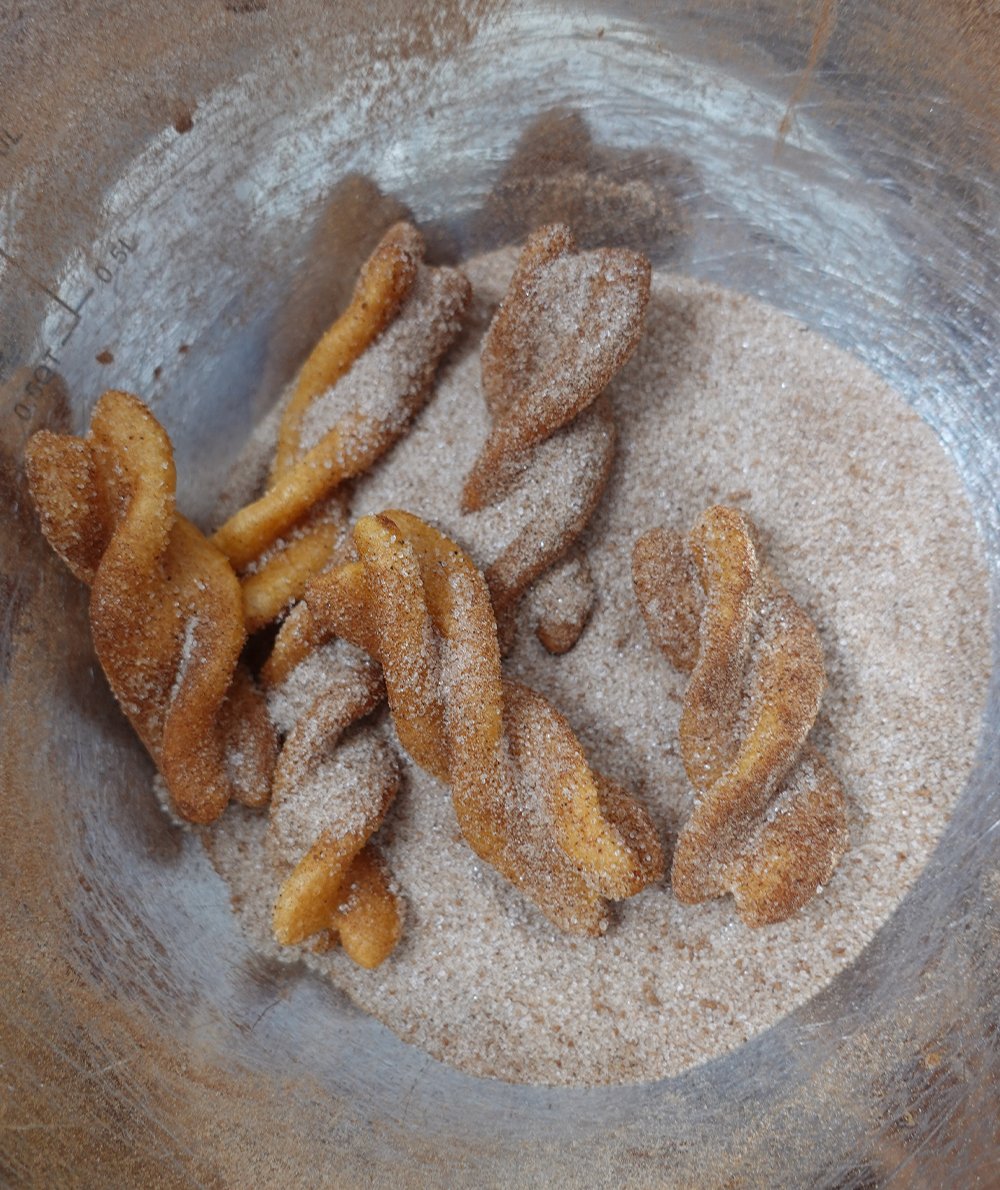 You can play with the exact ratio of cinnamon to sugar as well. I tend to like more cinnamon in my coating, but many people will make theirs more sugar-forward, which is what Taco Bell tends to do as well.

I always recommend starting with only a little bit of cinnamon, mixing it into your sugar, and then assessing whether or not you need to add more. 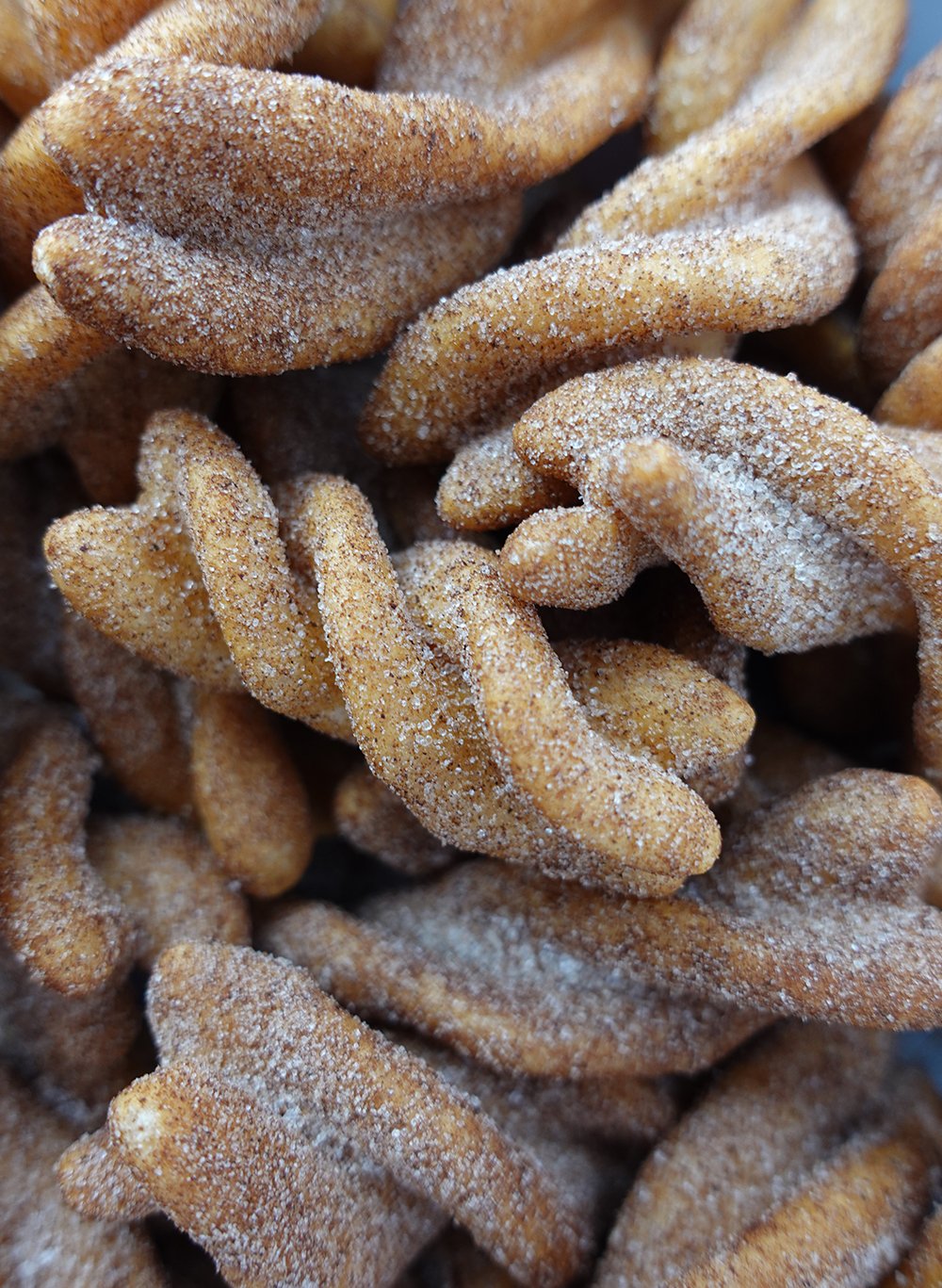 That’s all there is to it!

These Taco Bell Cinnamon Twists are great served fresh, but they hold up just as well as leftovers. I added my leftover twists to a bag and saved them to snack on throughout the week, and they remained just as crispy as when they were fresh. 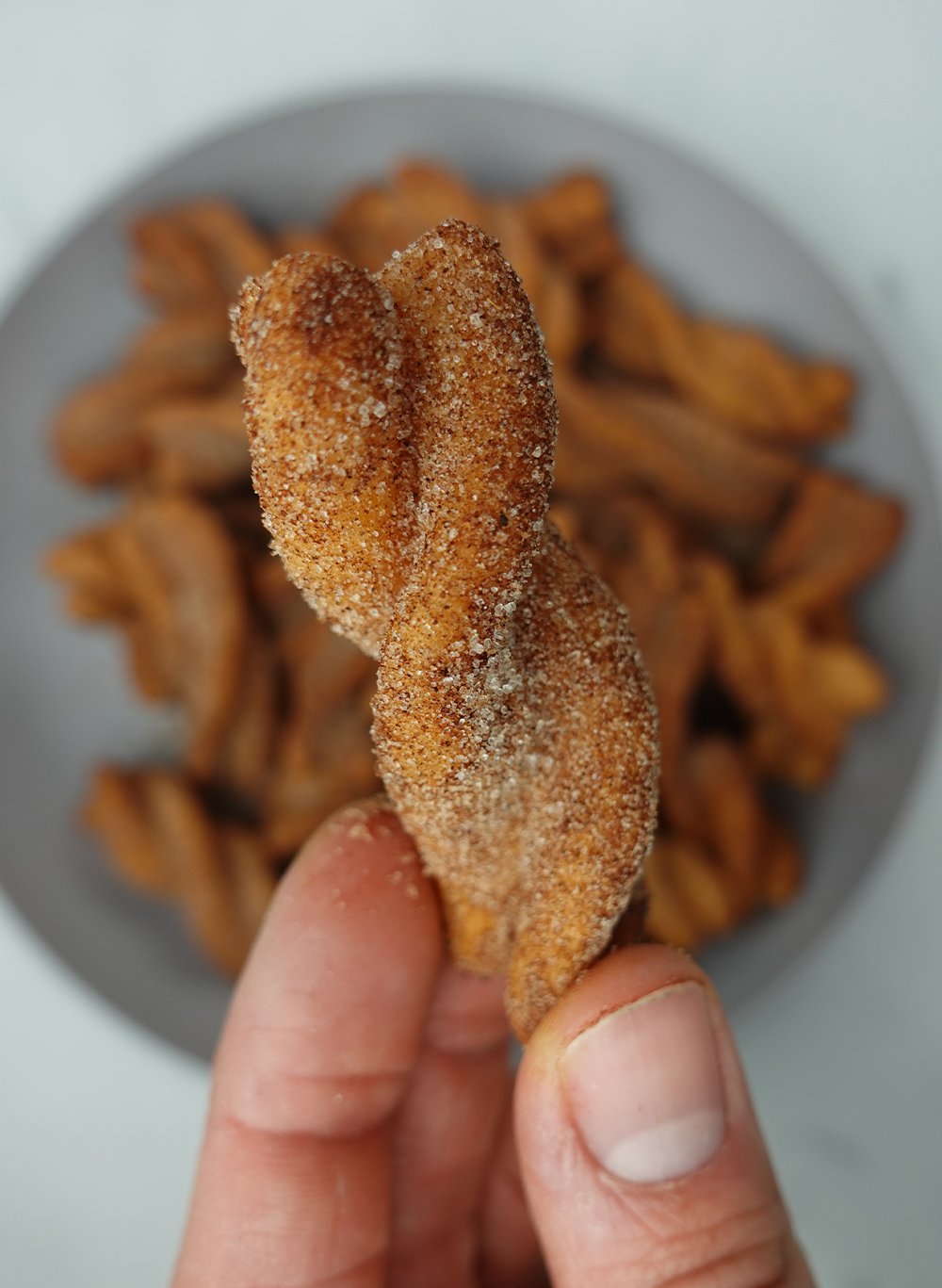 But since this recipe takes only 5 minutes total, you can easily whip up a batch one at a time to enjoy whenever you’d like!

Mix up some cinnamon sugar (or buy some Cinnadust seasoning from Cinnamon Toast Crunch) and store it for later use, then you’ll be ready to make a quick bowl of delicious cinnamon twists whenever the craving hits. 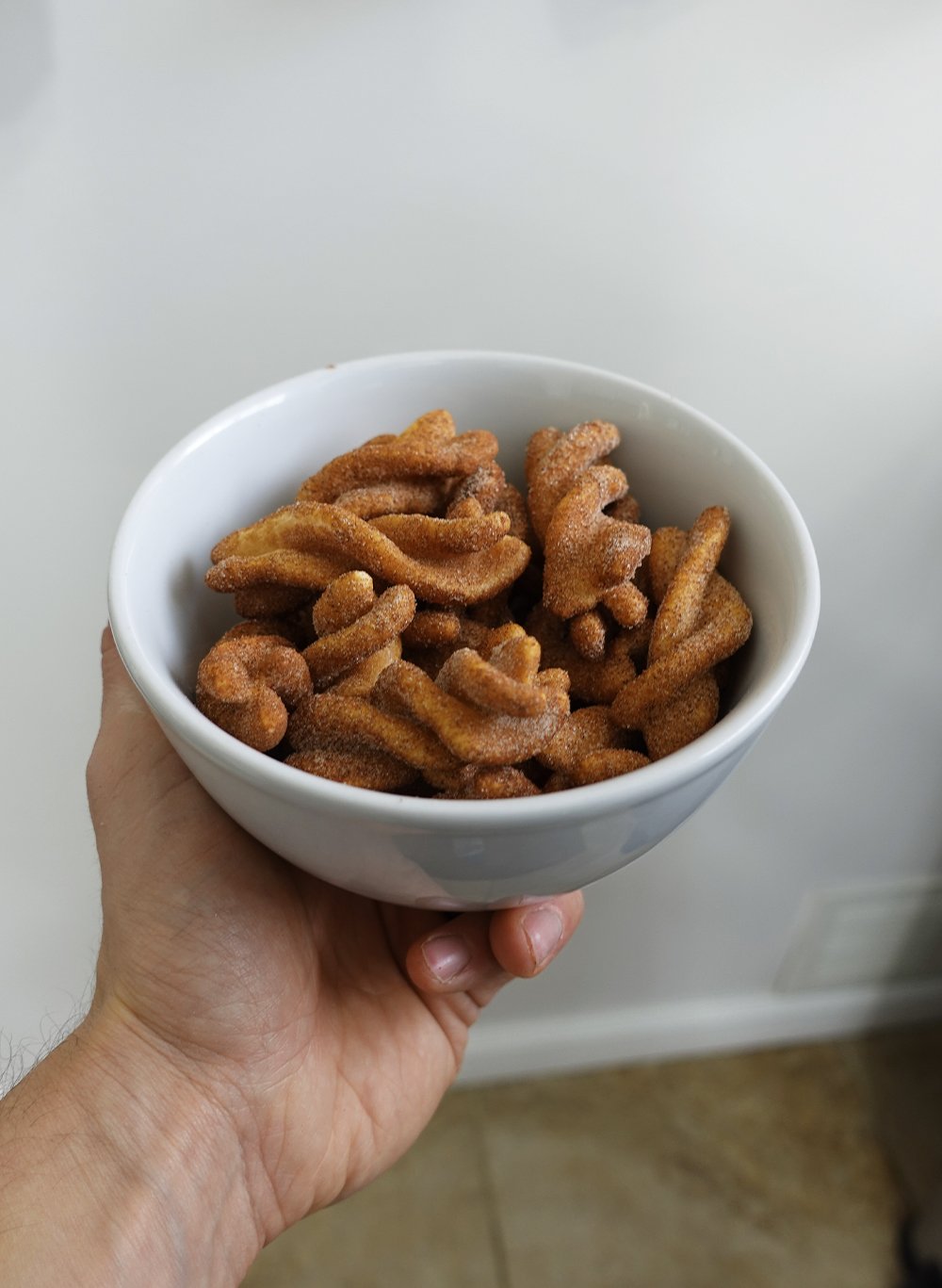 Air fryer cinnamon twists are far from the only cinnamon recipe here on my blog. If you love the cinnamon & sugar combo, here are some other recipes of mine that you should check out: