My favorite Fall treat is fresh cider donuts from the cider mill, and it’s even close.

Luckily for me, I live in Michigan, and we have plenty of apple orchards and cider mills around here. So, come Fall, there is no shortage of apple cider donuts.

If you’ve never had a cider donut, first of all, what are you waiting for?! Second of all, you’re missing out big time.

Apple cider donuts are incredibly moist donuts, freshly fried and coated with cinnamon & sugar. When they’re fresh, there is truly nothing better.

There’s no substitute for the real thing. I’m not going to lie to you and say these are as good as fresh apple cider donuts, because the real-deal is just too good.

But I can proudly say that these are damn good. 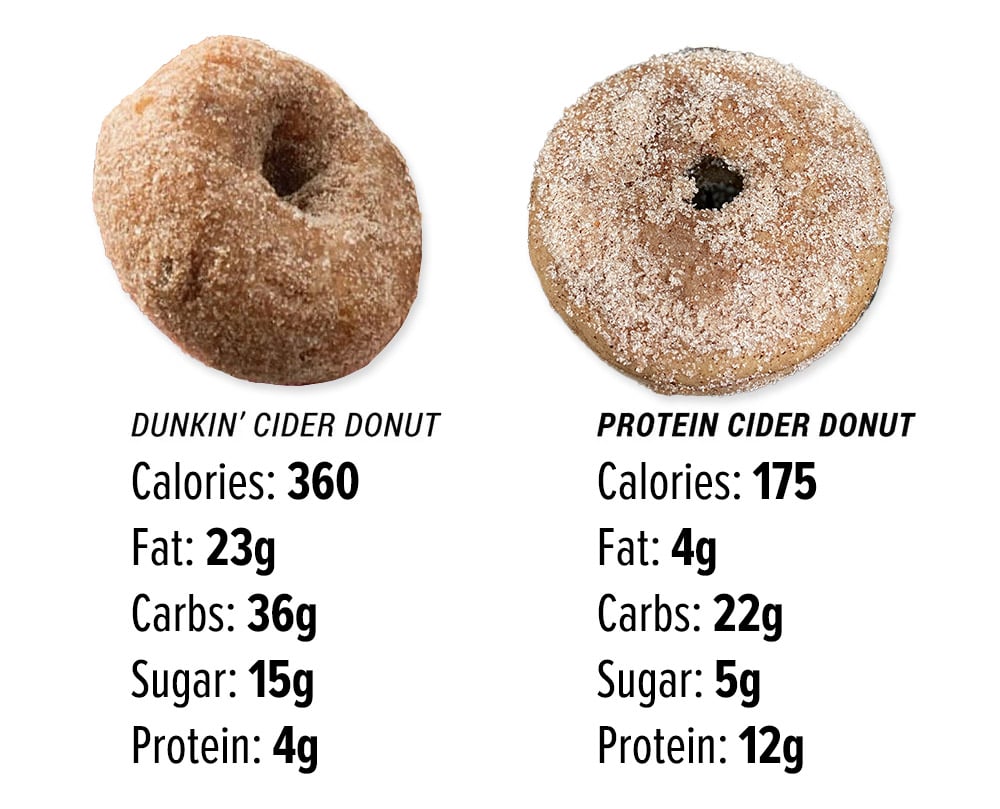 Fresh apple cider is already very sweet as it is just concentrated apples. But for cider donuts, that is taken one step further, and the cider is reduced down into a syrup for an intense apple flavor, and it’s how you get that deep brown color of the donuts.

We’re not using any apple cider.

Apple cider donuts without apple cider? What is this blasphemy?!

To reduce the calories and sugar here, I opted to leave the apple cider out, so we have the sacrifice that deep brown color. But that’s a sacrifice I’m willing to make. 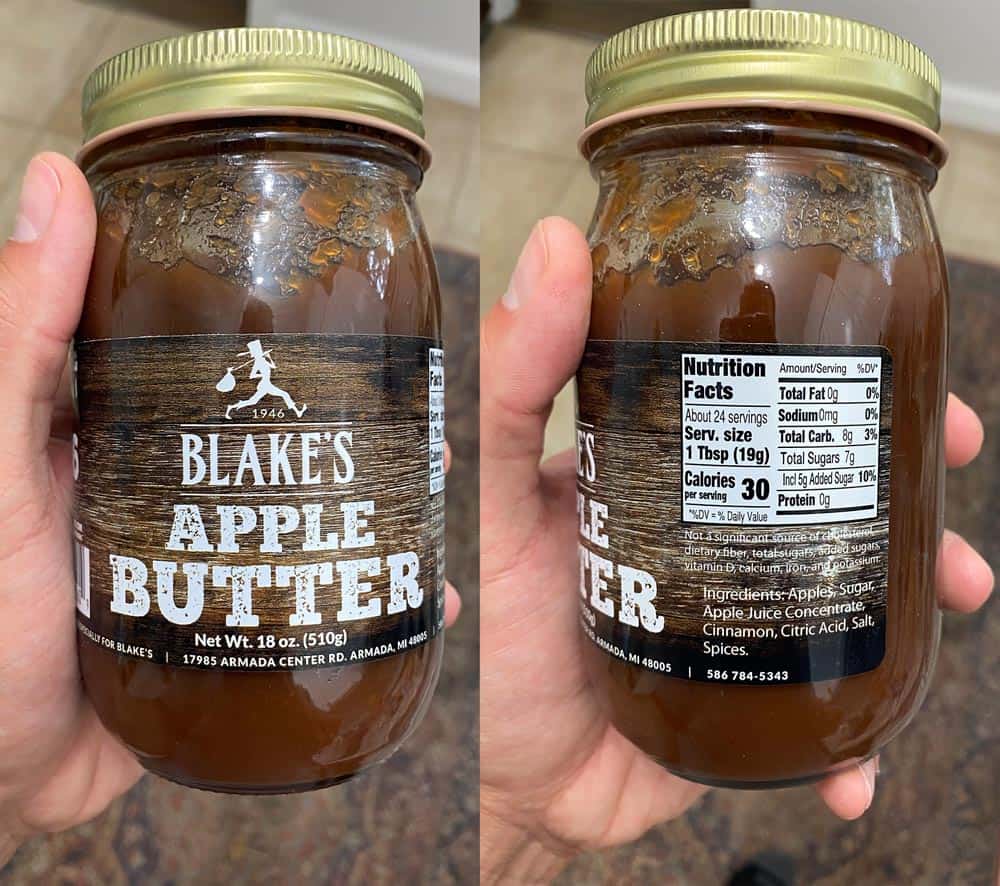 If you’re unfamiliar with apple butter, it’s quite similar to applesauce. In fact, I’d consider them siblings.

The difference is that apple butter is a more concentrated version of applesauce. Essentially, it’s just cooked down longer, leading to less liquid and more of a caramelized color and deeper flavor.

I used an apple butter from our local orchard, but most stores should sell it! Look for it with the jelly/jam in your store.

And don’t worry about having to buy a jar of apple butter just for this recipe- make a peanut butter + apple butter sandwich, fall in love with it, and thank me later. It’s significantly better than peanut butter & jelly sandwiches, believe it or not.

Can you substitute apple butter?

If you follow the recipe exactly as written, you can directly swap out the apple butter for more unsweetened applesauce.

I tried this with success, so you shouldn’t have any problem there.

That being said, I HIGHLY recommend using apple butter if you can. My version with just applesauce was good, but really lacking that punch of apple flavor.

Since we’re not using any cider, the apple butter acts as the perfect flavor replacement for it, and I highly recommend utilizing it.

I’ve made this recipe numerous times, and I’ve experimented with different sizes each time. I prefer making these as standard donuts, of which this recipe will make 6.

If you want to go slightly smaller with them, you’ll get 8-10 donuts, depending on how much you fill the donut pan.

I’ve always used this donut pan for standard-sized donuts, but you can make smaller donuts with these silicone pans as well.

To make these donuts, all we need to do is mix together all of our ingredients until we have a thick batter. 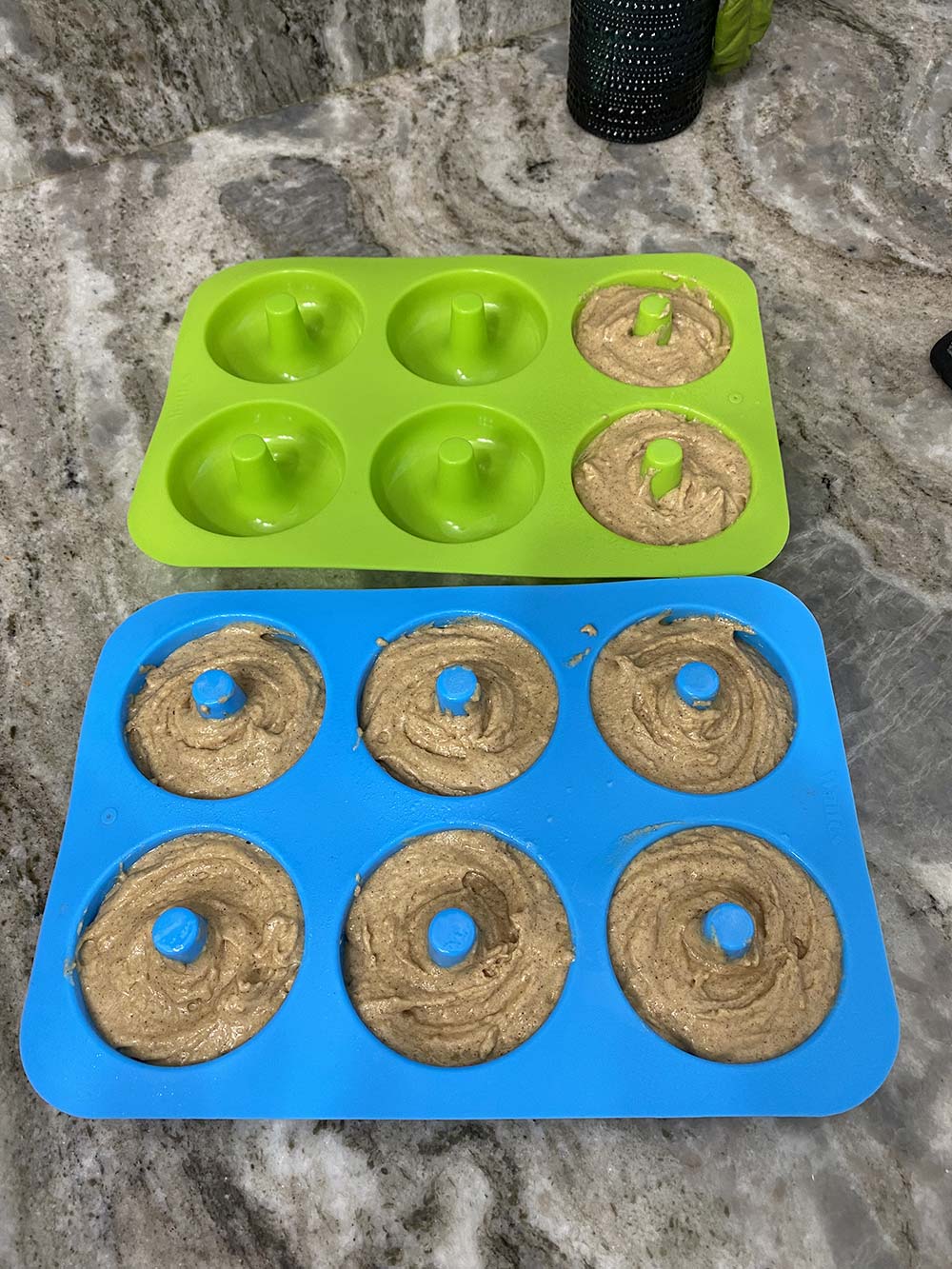 I filled each donut cavity with batter, then used my finger to swirl it around to make sure the batter was evenly distributed.

You’ll see that in this case, I made 8 donuts, but you’ll want to stick with 6 donuts if you’re using a standard pan. If you make 8 smaller donuts, each will be about 130 calories instead of 175.

Bake the donuts for 10-12 minutes. The exact time will vary based on the size of the donuts and the type of protein powder you use, so I recommend checking at 10 minutes to see if they need any additional time. 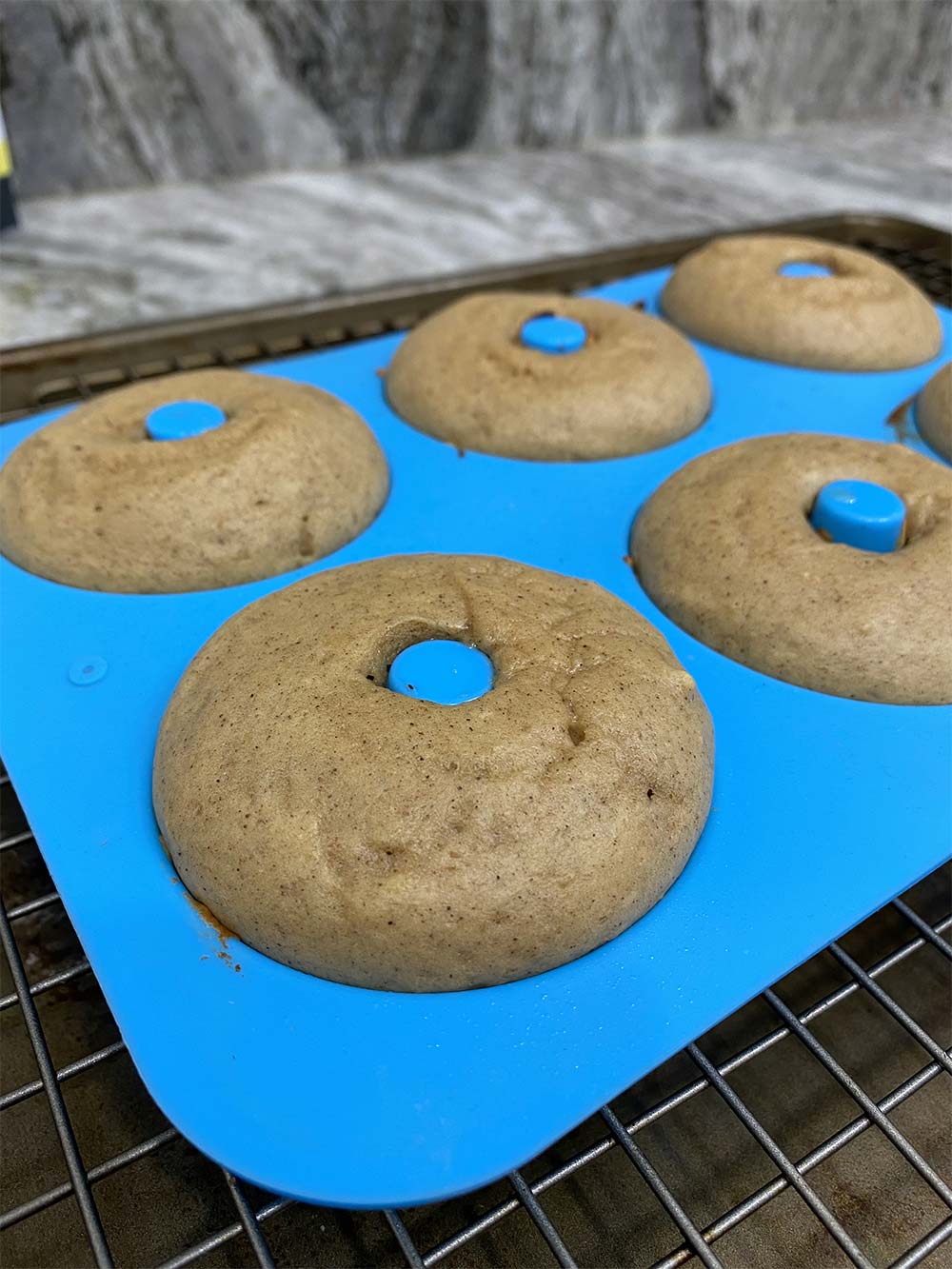 When they’re fresh out of the oven, we’re going to give them a quick butter spray before tossing in a cinnamon-sugar coating. 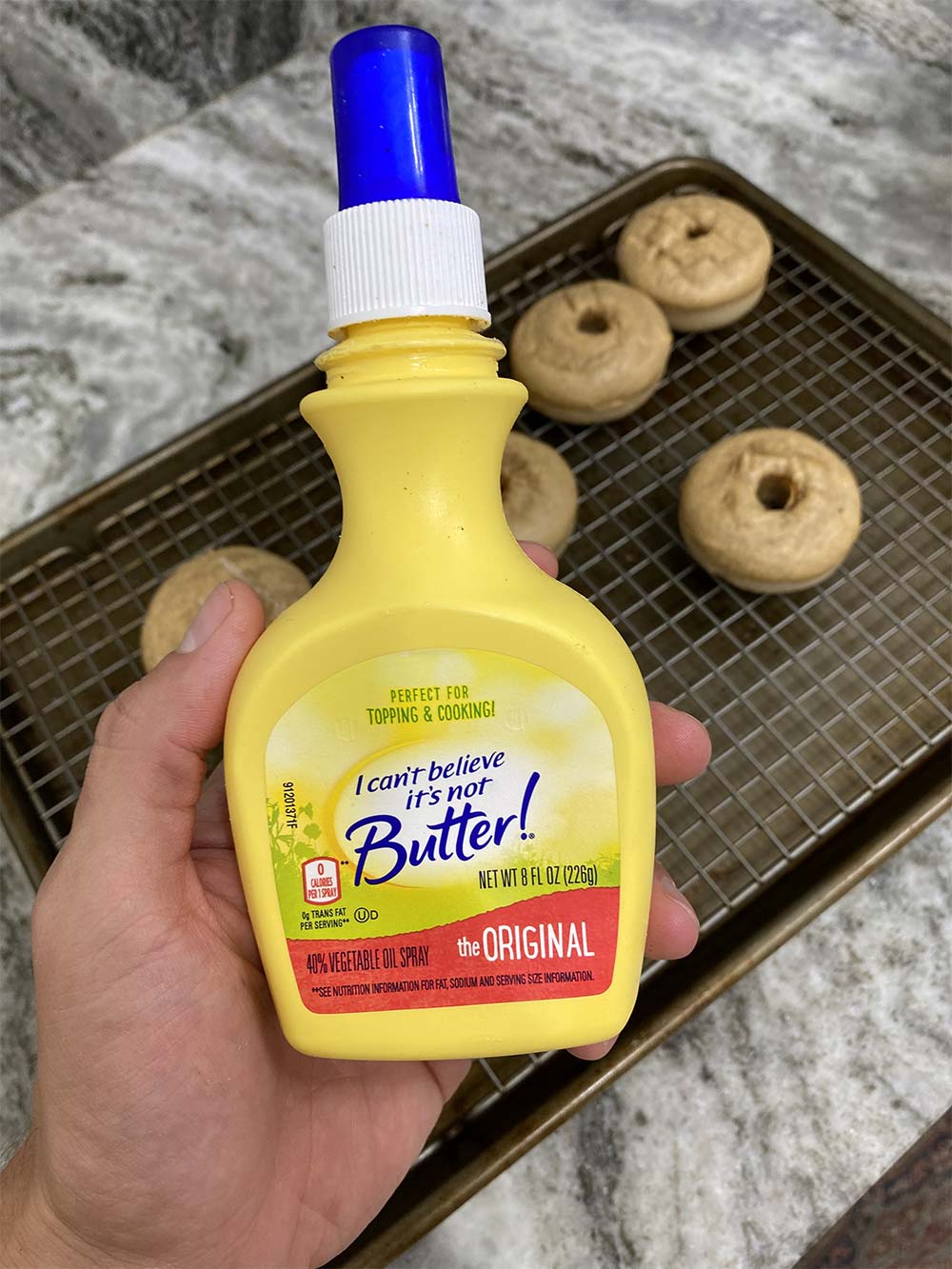 I like to use the double-coating technique for extra flavor. What I like to do is coat the donuts, spray them once more with butter spray, then coat them again.

There’s not going to be a ton of extra cinnamon sugar, but the butter wets the tops a bit and the end result is a much more authentic apple cider donut look.

Here’s what the difference between a single and double coating looks like: 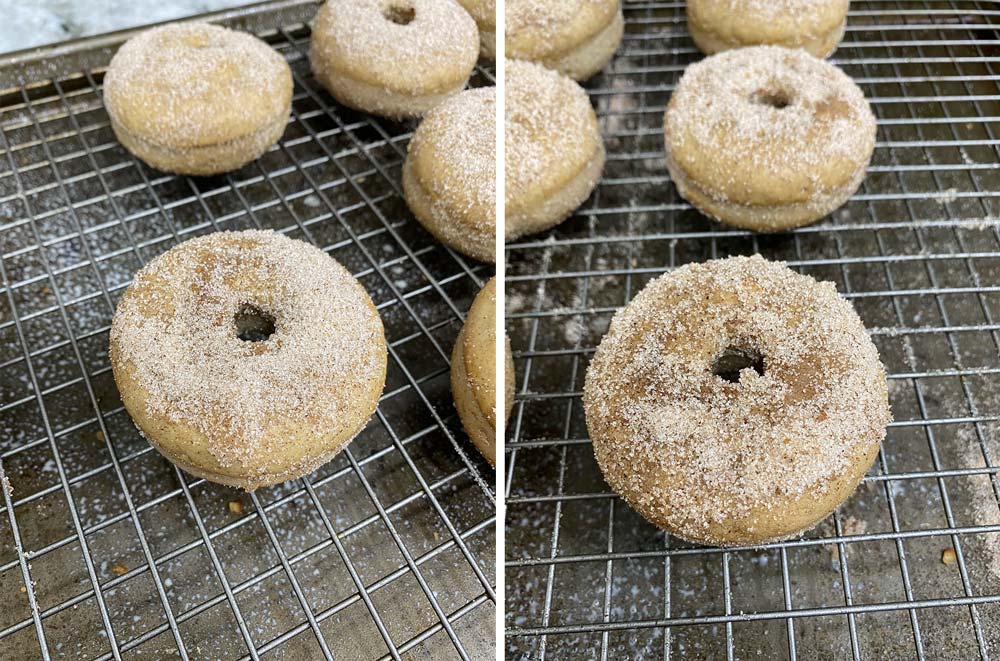 Serve ’em up fresh, or save them and give them a quick 10-second reheat in the microwave before serving. 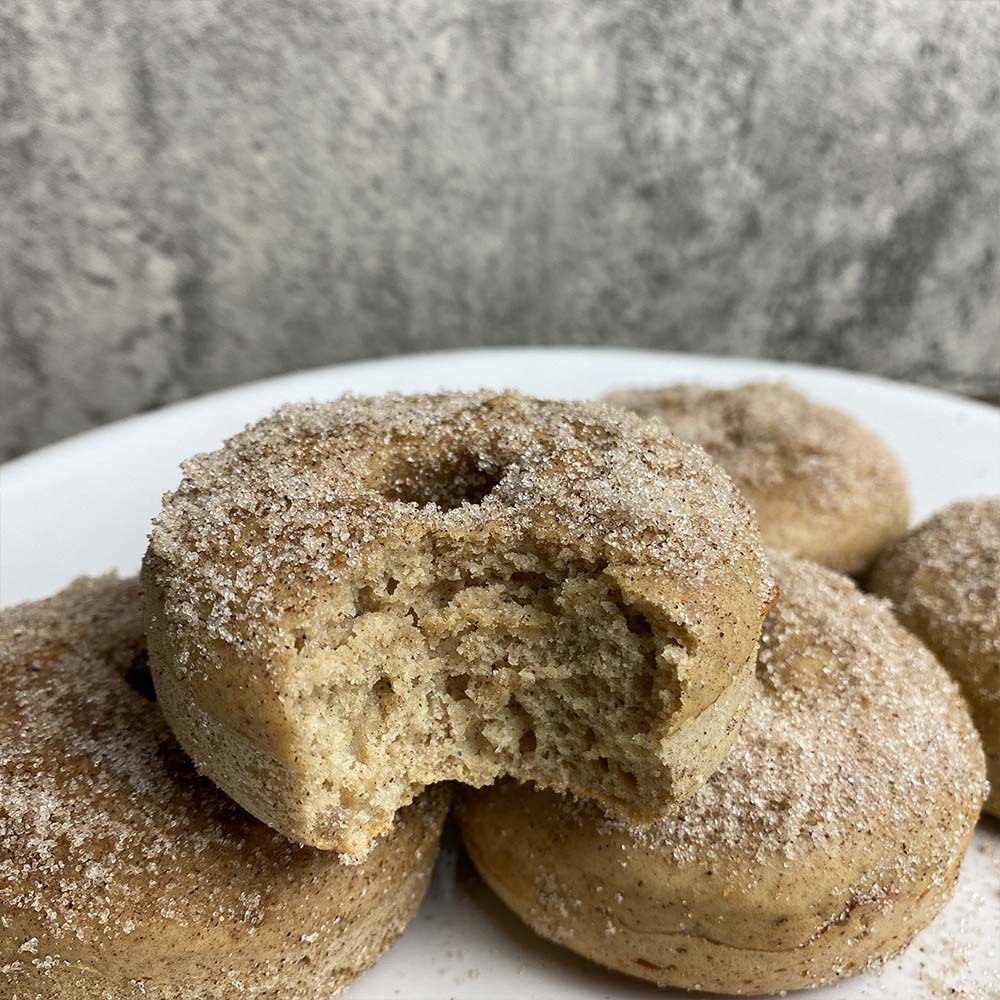 And if you need even more incentive to make these donuts, I’d like to point you to my new favorite breakfast… 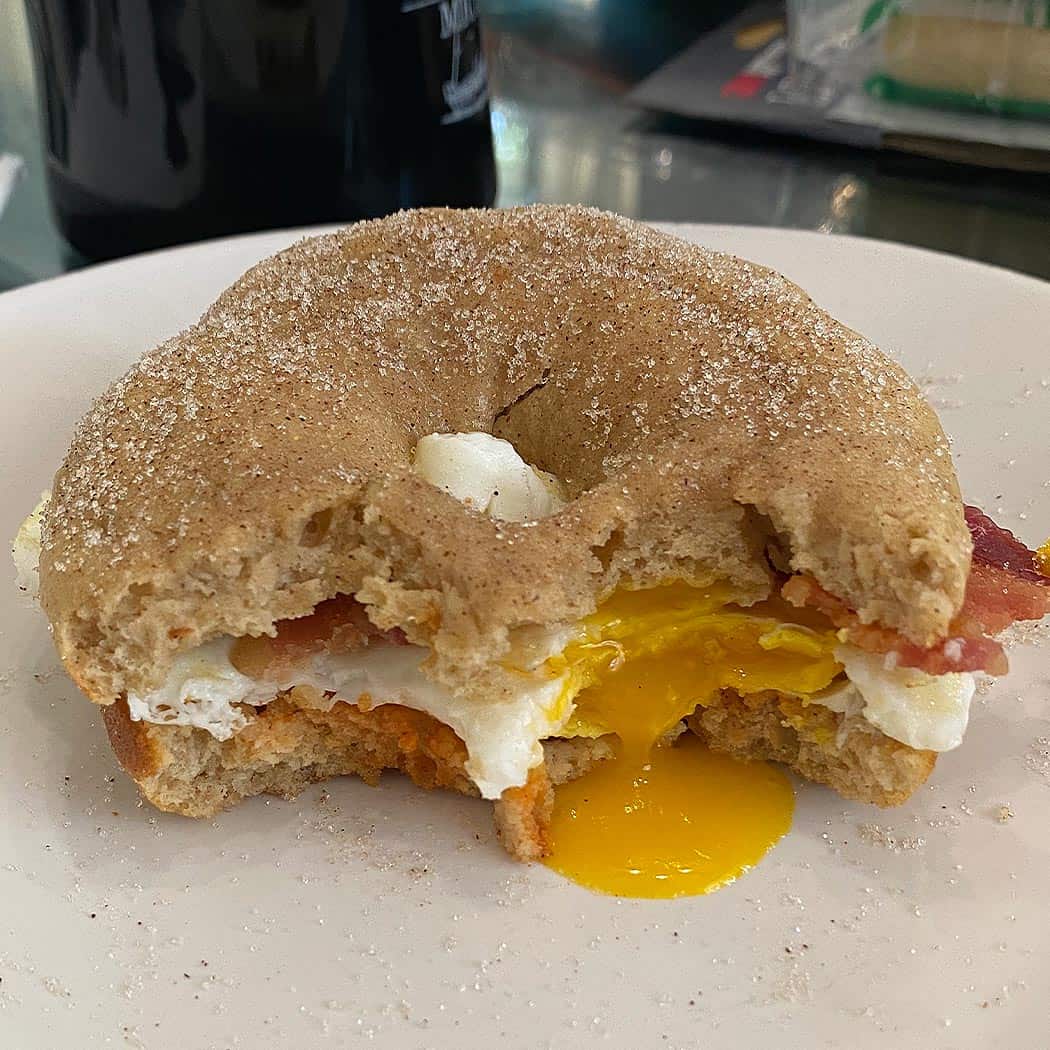 Just slice the donut in half, add an egg and some bacon, and enjoy.

Which protein powder should you use for Protein Apple Cider Donuts?

In this recipe, I used PEScience Snickerdoodle protein, which is a whey/casein blend. 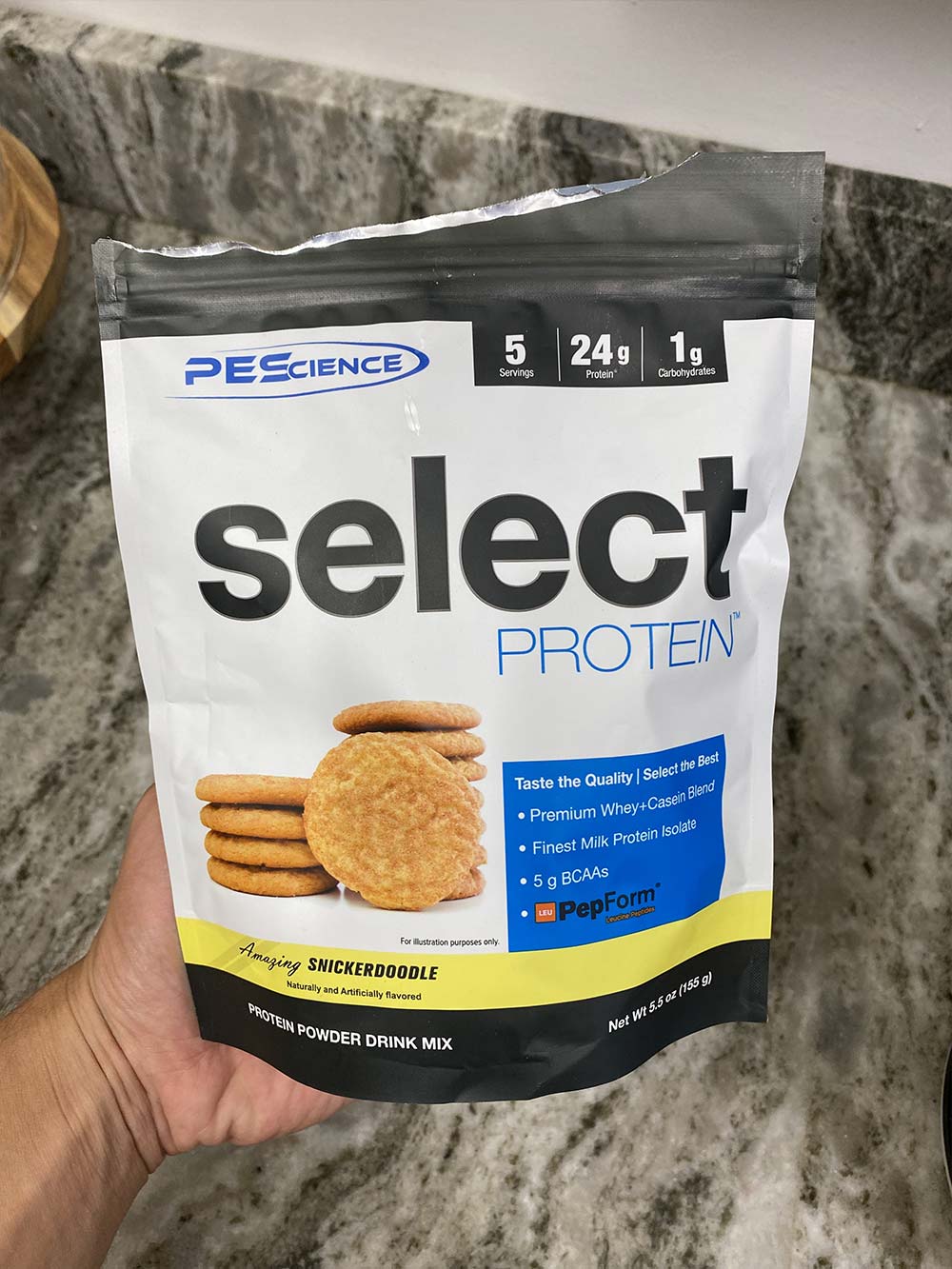 If you’ve made any of my other high-protein recipes, you’ve seen me using PEScience before. That’s because the combination of whey & casein protein powder works SO much better than whey protein alone in most cases.

I originally developed this recipe using vanilla flavored protein, and it works just as well, so don’t worry if you don’t have Snickerdoodle flavor specifically. It just adds a nice extra cinnamon flavor!

Note that I’ve since signed up as an affiliate for PEScience because I love their protein so much. You can save 15% on any order with the code “Matt“, and I appreciate it so much when you do. It doesn’t seem like much, but it helps me continue to be able to develop free recipes for you guys!

If you opt for whey protein powder in this recipe (I don’t recommend it, but it should work in a pinch), my advice is to follow the recipe as written, but leave the applesauce out initially.

Mix everything together, and then add the applesauce last to thin out the batter and get it to the right consistency. Whey protein absorbs liquids differently, so you’ll want to be able to adjust the amounts

But as always, feel free to experiment. 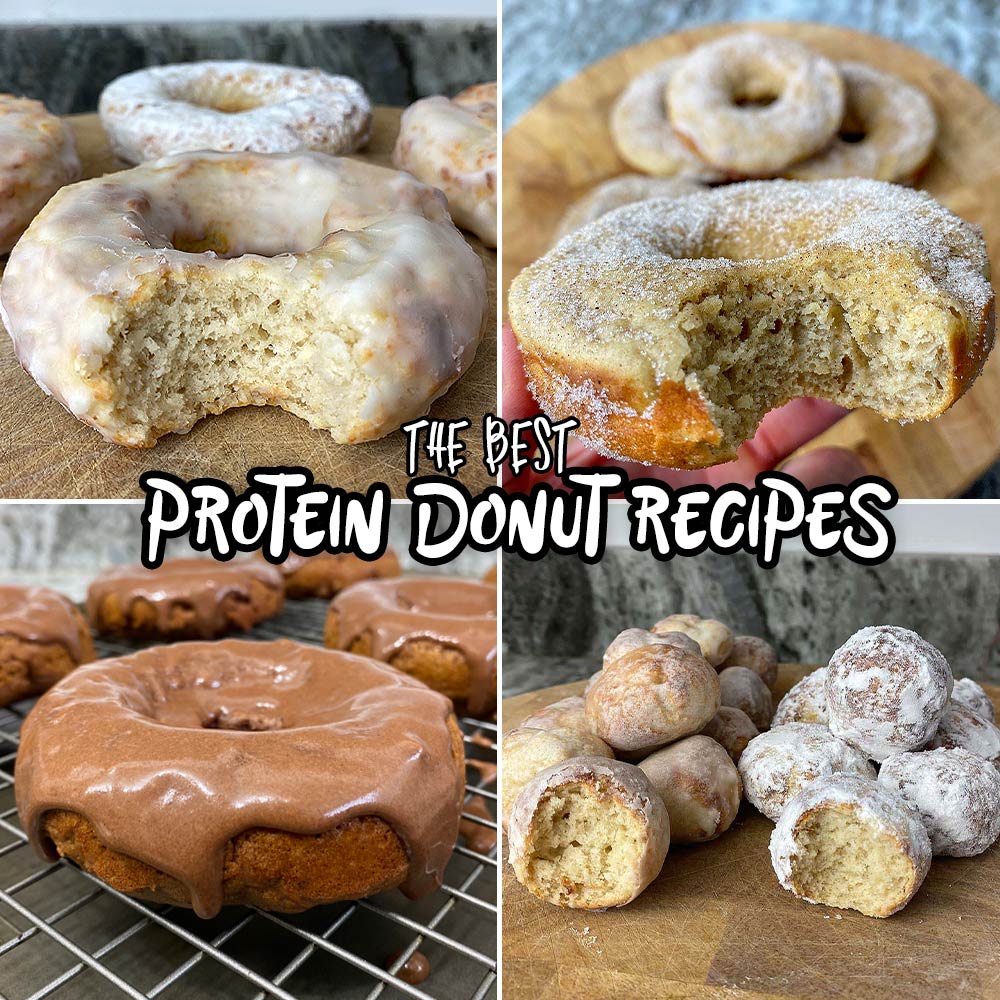 And if you want more donuts in your life, be sure to check out my collection of the best protein donut recipes!

Or, if you’re now in the mood for some more apple recipes, check out my Apple Pie Overnight Oats or Apple Cobbler with Sweet Biscuits.

Hey, Matt! Have you experimented with subbing eggs with an egg replacer, such as Bob’s Red Mill Egg Replacer? My wife has a bit of an egg intolerance, but I want to make these for us. I guess I could give it a go and share the results! 😬

Second time marketing these and they are fantastic! I only make 6 so mine are a bit bigger and I forgot the granular sugar in the dry ingredients the first time and they were great so I did it this time too. These doughnuts are perfect for fall, they taste amazing, your apartment smells delightful, and they fit the macros! Love them!

If i don’t have apple butter does this mean i have to add total of 210g of applesauce in this recipe? Thanks

Amazing! These donuts have it all. The flavor was spot on. My teenage son devoured them. Pretty easy to make. Have made them a few times already. Saw other comments. No issues with being to dense. Ours have always been fluffy.

Thank you so much Jacob! Glad you're enjoying them :)