Apples are the best part of Fall (sorry pumpkins), and we’re capturing that magic in this incredibly simple breakfast.

And, it’s absolutely packed with protein! Parfaits don’t get nearly as much love as they deserve… 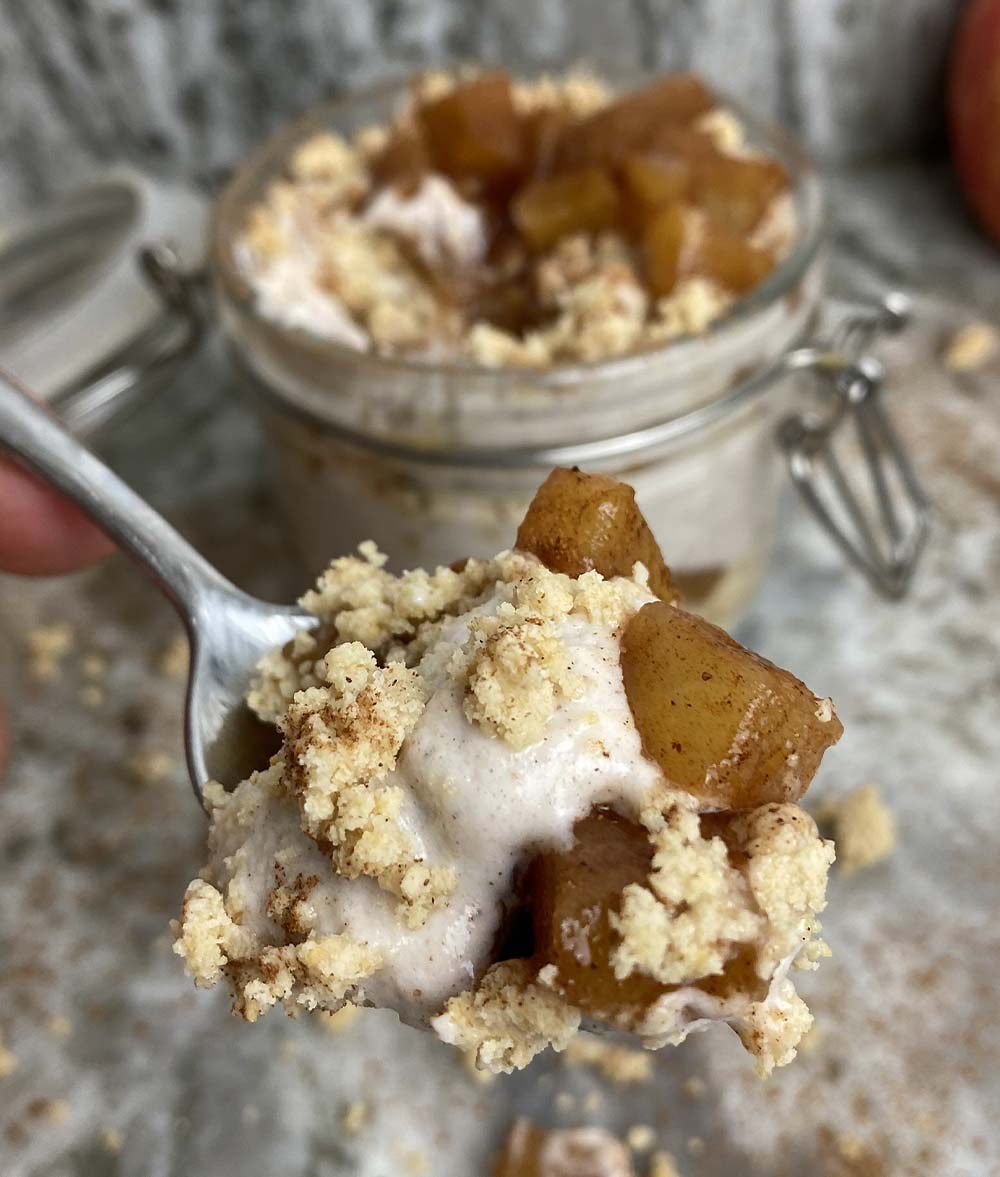 This recipe makes 2 parfaits, and each one has only 365 calories with 35g of protein.

If you love apple pie, you’re going to love this Apple Pie Parfait that you can throw together in about 10 minutes.

How to make apple pie parfait

The beauty of a parfait is that they are very easy to put together. We just need to create the 3 separate components and then layer them all together.

And unlike a true apple pie, we do not need to bake the apples OR the pie crust!

In a large bowl, we’re going to add all of the dry ingredients for our pie crust crumble.

Then we’ll add in the butter and one tablespoon of milk and mix that up until it forms a crumble. 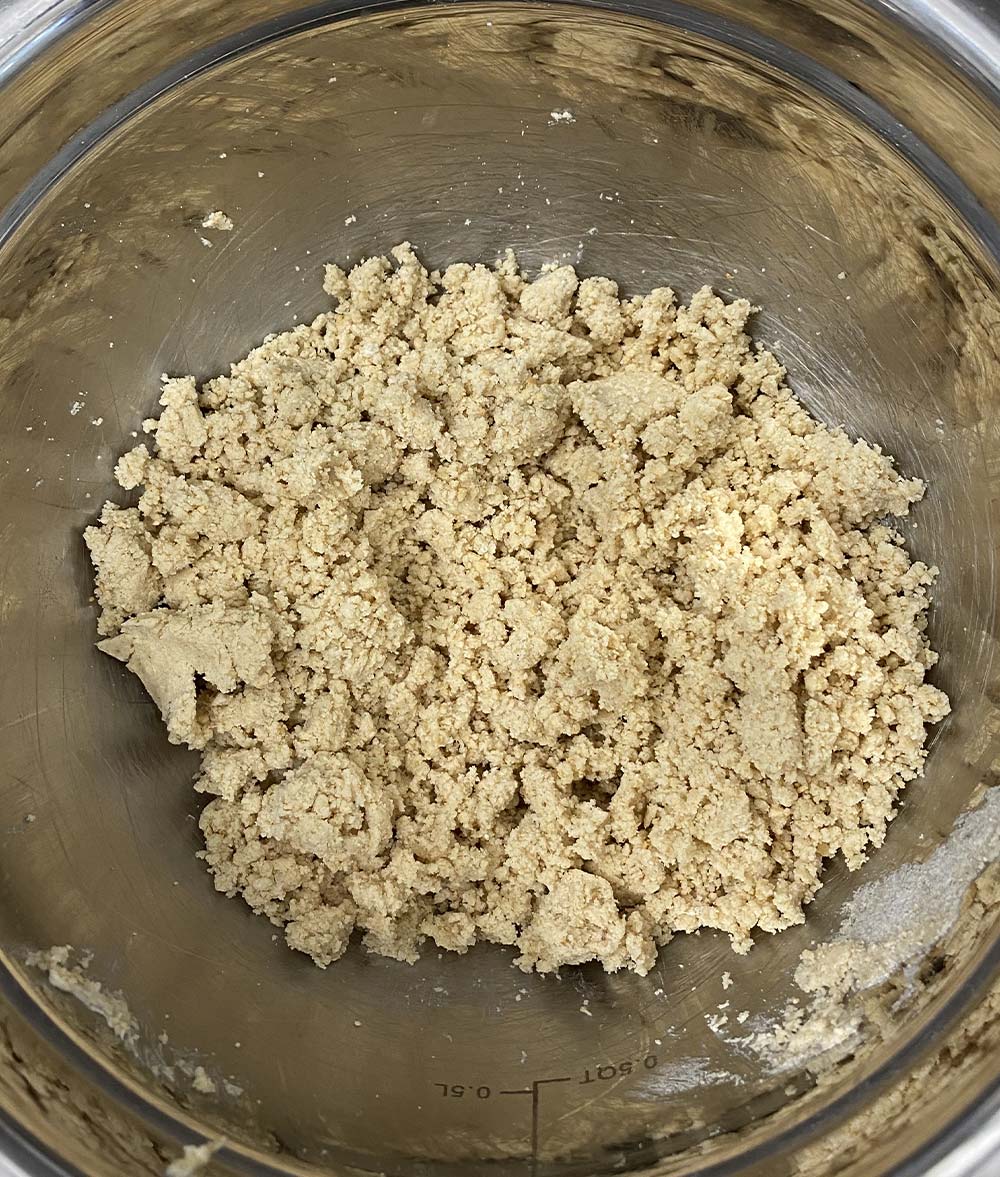 The crumble is going to be wet enough where you could pick it up and form it into a dough ball if you wanted to, but still be loose enough that you can crumble it into the parfait.

If you wanted to form this into a no-bake pie crust, you certainly could, but we’re going to stick with the crumble to make it easy to assemble. 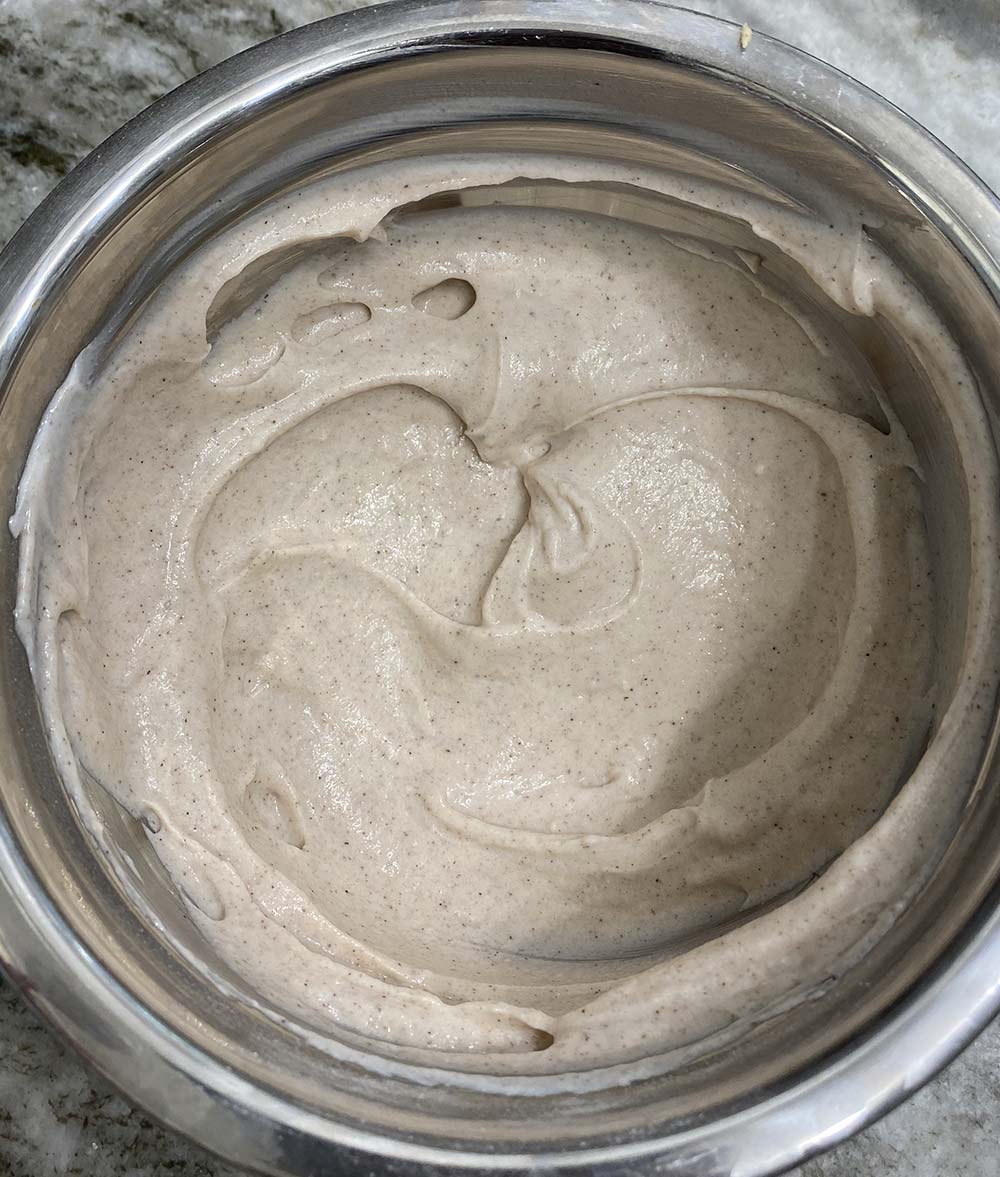 If you want to leave the protein powder out, you definitely could. However, it provides a great additional vanilla flavor, as well as acting as a thickener for the yogurt.

If you choose to leave the protein powder out, I’d recommend using vanilla-flavored yogurt to keep that vanilla flavor in this recipe.

The apple topping here is what is going to bring everything together. It’s going to provide that authentic apple pie flavor, but we don’t need to bake them at all!

Instead, we’re going to utilize the microwave to quickly cook down our apples.

Dice up the apples nice and small. I didn’t want to spend time peeling my apples, so I just chopped the skin off with a knife. 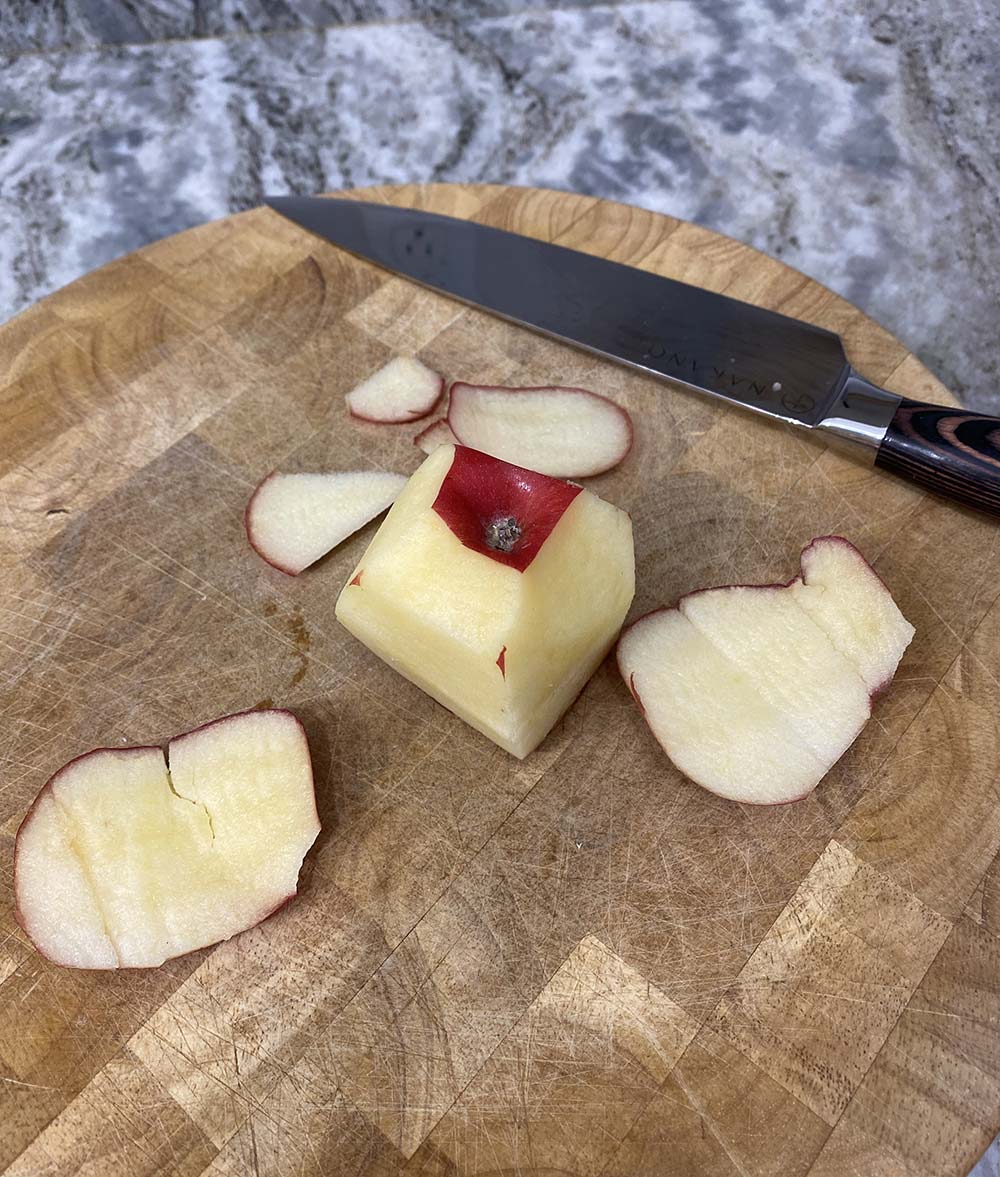 Note that when you do this, you’ll chop off a fair amount of the apple, which is why I used 2 apples here. If you use a proper peeler, you likely will only need one apple!

Dice it up, then add to a bowl with syrup and cinnamon and mix it up.

Microwave for 3 minutes to cook down the apples- you’d be surprised at how well this works! Just check out this before and after: 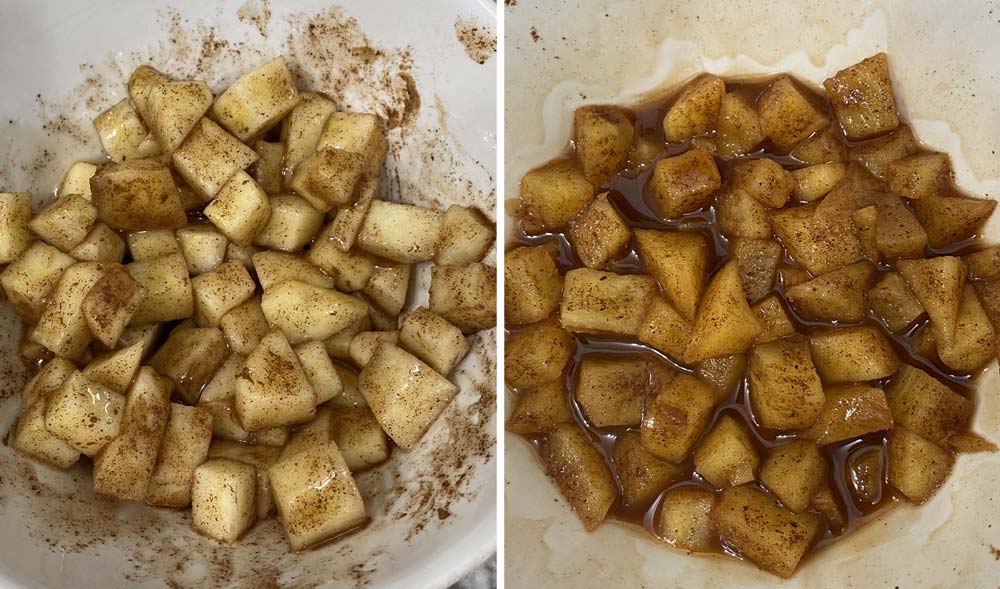 The apples will become nice and soft, and they will absorb some of the cinnamon and syrup, leading to an authentic apple pie filling.

Since they’ll be hot right out of the microwave, I tossed these into the freezer to give them a quick cool-down before assembling.

Once the apple topping has cooled, you’re ready to assemble!

I put together two parfaits in small mason jars, which allowed me to double up each layer for the parfaits.

I layered some pie crust crumble, then apples, then yogurt, then repeated one more time. 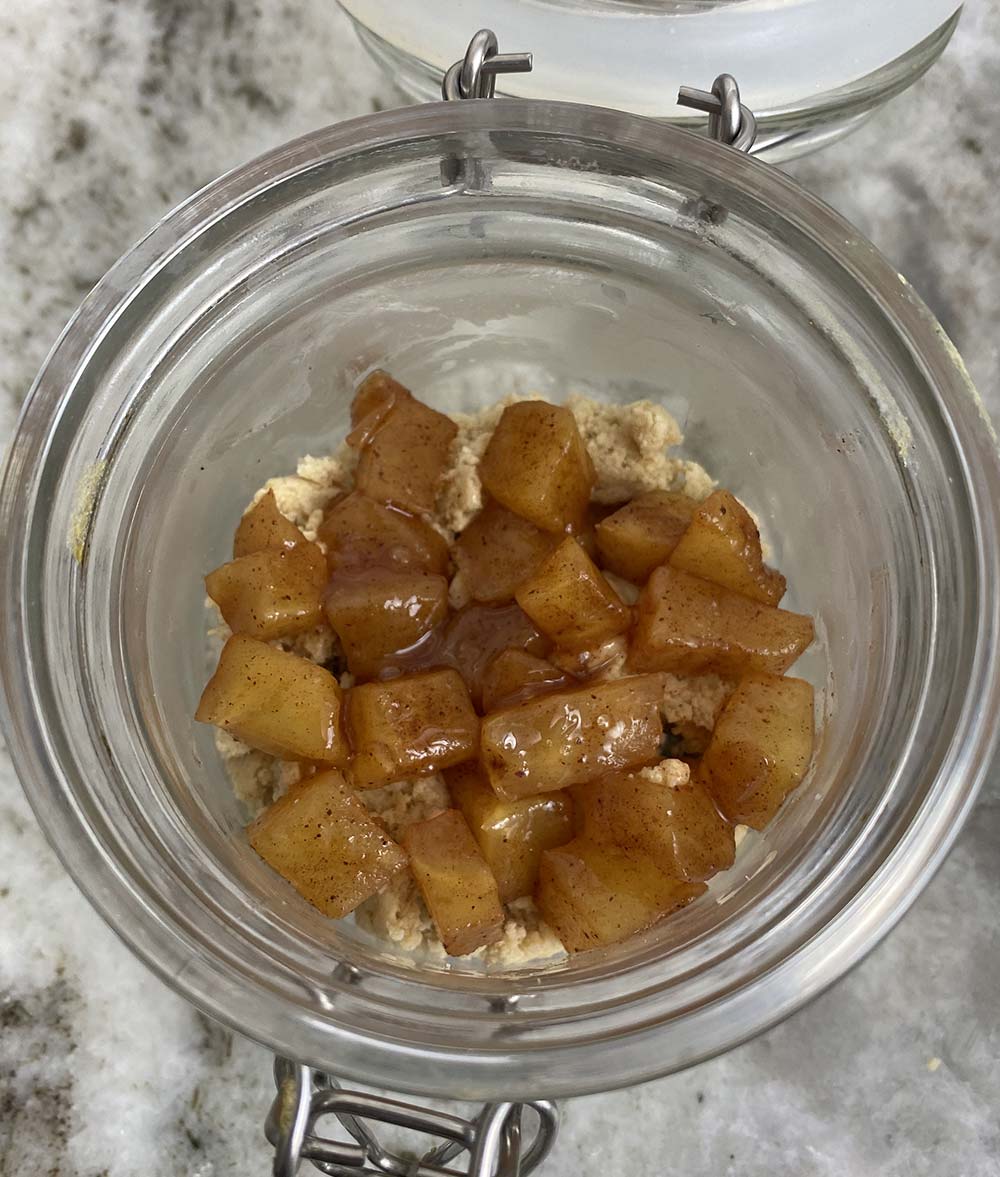 You can create as many or as few layers as you’d like!

I prepped my apple pie parfait in sealable mason jars and saved them to enjoy later in the week, which worked out perfectly! 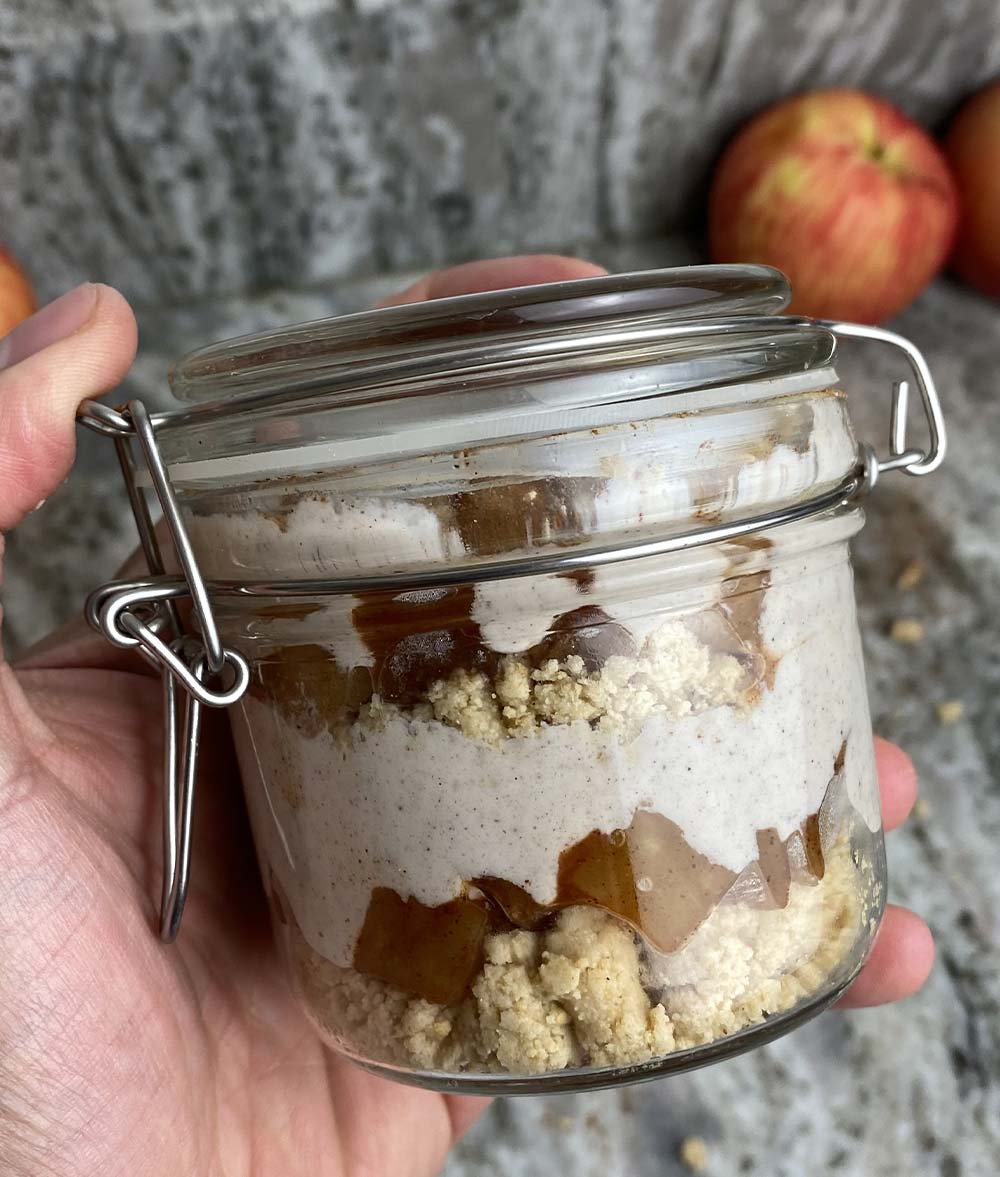 These parfaits hold up great, so feel free to make them ahead of time for later in the week.

Fall is apple season, but I can’t deny the fact that it’s also pumpkin season. If you’re searching for more delicious Fall-related recipes, here’s a bunch that you’re sure to love: