In case you didn’t know, Oprah makes pizza now. Well, she puts her name on a frozen pizza and sells it. 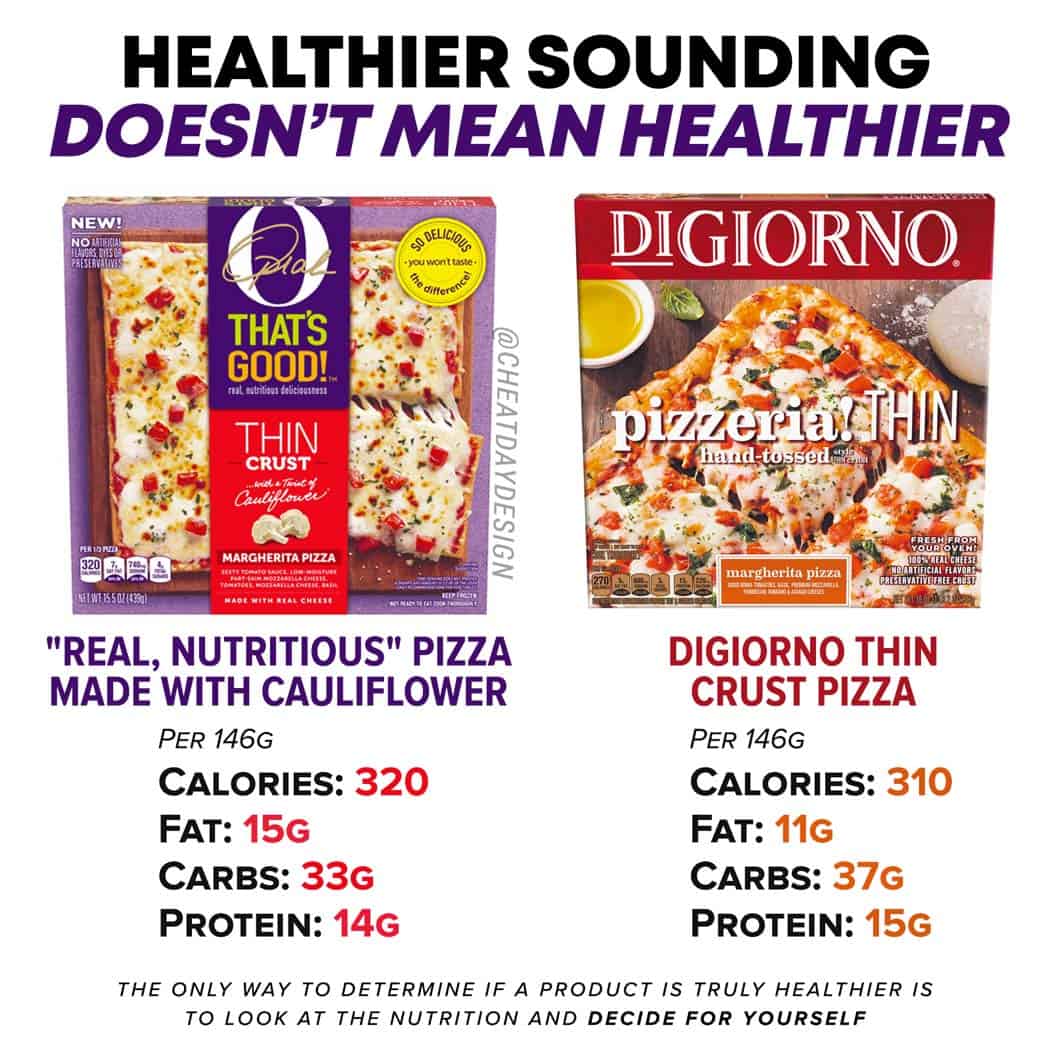 And it absolutely seems like it’d be a healthy alternative to “normal” pizza, right?

You need to be very careful when it comes to labels. This is why I want you to be able to read the nutritional information & ingredients and make a decision on what food to buy based on what YOU want. Not based on the packaging.

Notice how the pizza on the left doesn’t explicitly say that it’s low calorie or necessarily healthier, but it absolutely wants you to think that. It’s described as “real, nutritious” pizza, touted as a cauliflower crust, and it’s got Oprah’s name front and center. Yes, the woman screaming about how much she loves bread on the weight watchers commercials. All these things seem like it would add up to a healthy pizza.

And then you have Digiorno. The frozen pizza that is never advertised as healthy, but as simply a frozen pizza you can make at home instead of ordering delivery. Turns out, it’s just as “healthy” as the other pizza, if not more-so (the serving size is slightly smaller, so I adjusted the macros to compare equivalent serving sizes)

Healthy sounding doesn’t always mean actually healthy. It’s all a part of marketing. By using a bunch of buzzwords, and in this case, advertising cauliflower (the cauliflower is only substituting 1/3 of the crust in this case, which is misleading) people are sure to flock to this pizza thinking they’re making a wise choice.

But at the end of the day, it’s just pizza.

Learn to read the nutritional information and make decisions on your own terms. These marketing tactics are everywhere- ice cream, pizza, cookies, etc. Throw certain buzzwords together and it’s easy to make a product sound healthy. Don’t let Oprah brainwash you. Even if she offers you a free car.

But let’s not just go after Oprah. Let’s look at another example…

This is no knock on Nutrisystem or their food, of course. Plenty of people follow a Nutrisystem plan and see great results.

If you’re unfamiliar, it’s basically a program like Weight Watchers that takes care of portion control & calorie counting for you to help you lose weight.

However, that doesn’t mean their food is any healthier than regular options out there.

One of the most important things I want to help you realize is that you don’t NEED “diet” foods.

I’ve not come across Nutrisystem foods out there in the world, but apparently they’re all sold at Walmart. When I looked up their pizza, I learned two things.

One, there’s nothing unique about it. It’s just a small pizza.

Two, when I say small, I mean SMALL. When I looked up photos, it’s the size of a small pita. And based on the reviews, is not very good either.

On the other side, you have mini pizza bagels: one of the best snacks out there. I specifically chose to look at @annies brand, because I’ve never had something from them that I disliked.

When you compare the two nutritionally, they are nearly identical. It might seem like you’re getting more food out of a full thick crust pizza vs a serving of mini pizza bagels, but the weights of each are actually very close.

At the end of the day, if your goal is weight loss, that means being in a caloric deficit overall.

It doesn’t matter if you choose a pizza designed specifically to assist your weight loss efforts or not.

You can eat WHATEVER you want. Seriously. Even if your goal is to lose weight, no single food is ever going to destroy those efforts.

If you’re actually following a Nutrisystem program, then the pizza will be appealing to you.

Otherwise, there is no reason to choose their pizza over anything else out there!