Which one sounds healthier: a blueberry muffin with an iced coffee, or an Egg McMuffin & hash brown with iced coffee? The first one for sure does, in my opinion.

The thought of getting a breakfast sandwich and hash brown from McDonald’s sounds super unhealthy to a lot of people. So, getting a blueberry muffin probably sounds like a much better option instead.

But if we look at the food from a pure macronutrient standpoint, the sandwich & hash brown seem to come out on top in every category!

There are 2 things worth noting here. First is the coffee. If you order a medium iced coffee, you’re automatically going to get a coffee with a bunch of cream and liquid sugar. Ordering it black saves you a ton of calories, fat, & sugar. If you absolutely need some kind of cream of sweetener, I suggest ordering the coffee black and adding your own.

The second thing to note here is that even though it’s fast food, it doesn’t mean it’s terrible for you. Sure, maybe the macros on the right aren’t the ideal breakfast for you. But if you’re on the road and need breakfast, you could do MUCH worse. Especially if you’re like me and love those hash browns.

A breakfast sandwich (with whole eggs, not egg whites) along with a fried hash brown probably sounds like it would be a greasy, fat-filled calorie bomb. But overall, it contains less fat than one muffin and coffee!

The quality of fast food is often the argument for not eating it. That’s fine. That’s not what this is about. This is about understanding that you don’t have to avoid fast food solely because it sounds unhealthy. Names can be very misleading.

Educate yourself on macros and nutrition and you’ll be able to enjoy the “unhealthy” food that a lot of people are afraid of. Maybe you want to go for that blueberry muffin. That’s okay! But you don’t need to avoid the other foods out of fear.

Let’s look at another example of fast food vs another option that is typically thought of as “healthy”…. 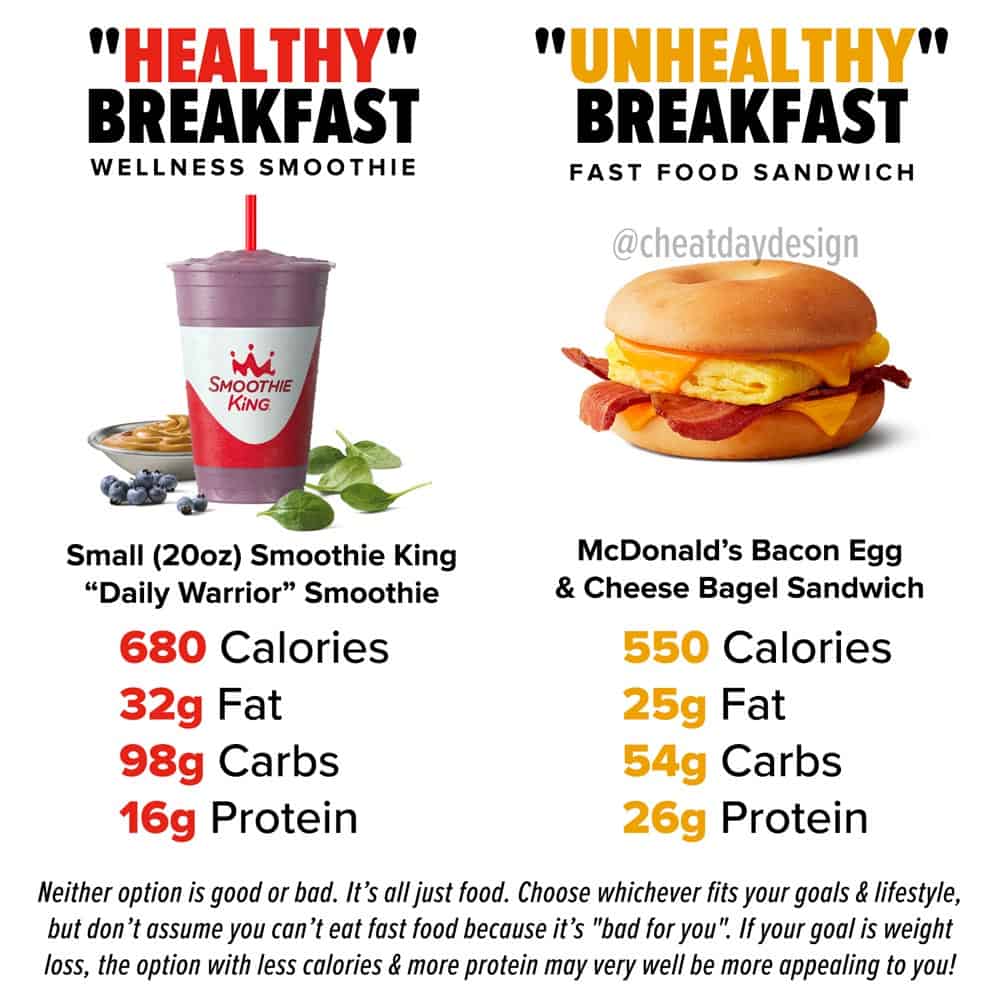 A “wellness smoothie” with fruits & vegetables is surely the better option, right?

Don’t get me wrong, a smoothie is great to enjoy. It’s packed with micronutrients and (usually) great ingredients, making it very healthy in that respect.

But when your goal is weight loss, it’s not automatically the best choice.

In this case, a small smoothie contains more calories, more fat, more carbs, and less protein than a bagel breakfast sandwich from McDonald’s.

Many people would assume the McDonald’s breakfast is a “bad choice” because it’s fast food, but when you actually compare them for what they are, it’s not necessarily a bad choice at all. In fact, that applies to all fast food- most notably the salads.

Look, if you hate McDonald’s or fast food in general and this post is just making you angry, then you’d clearly want to choose the smoothie. But that’s the whole point! You can and should choose whatever you want.

Personally, I’d MUCH rather have the breakfast sandwich. Not only is it going to fill me up more than a 20oz smoothie, but I’m going to enjoy it significantly more.

Just because something sounds like a better choice, it doesn’t mean it always is for YOU. It always comes down to what your goals are.

PS- the medium size of this smoothie has 1,050 calories, but that comparison felt too lopsided to use here. I will say, I would most likely order a medium vs a small, so it’s worth noting how much higher it is in calories!

In conclusion: breakfast is the best, and we should all eat breakfast food always.