I’m 100% ready for the Fall recipes to start rolling in (like the apple cobbler skillet recipe), but there’s still time to squeeze a summer recipe in here.

Nothing says summer quite like S’mores, but it’s definitely a flavor that works year-round.

I’m not going to write too much text before diving into the recipe for this one, but there are a few things I do need to cover.

My goal is always to make recipes as easy as possible for ya, but with high-protein baking, the amount of variables that can occur really make it challenging. That’s why I try to break down my recipes in as much detail as possible!

I know notes are annoying. Seriously, I get it. I can’t tell you how many recipes I’ve found online where I’ve thought to myself “just get to the point already!”

Now that I’ve been doing recipes more regularly, I understand why the notes are so crucial. You will definitely have troubleshooting questions, and I want to get ahead of those!

The beauty of these cinnamon rolls is that we’re using the infamous “2 ingredient dough”. Okay, technically it’s more than 2 ingredients, but it’s essentially just flour + plain Greek yogurt. If you’ve made the 2 ingredient bagels or breakfast bagel bombs, you’re already familiar with this dough.

The thing to keep in mind with this dough is that it’s a little bit denser than a typical cinnamon roll dough. It’s not super light and airy, but it works just fine for these! I’ll take a slightly denser dough if it means being incredibly simple to make.

The first time around with these rolls, I used All-Purpose Flour. It worked just fine, but I wanted to try using Cake Flour instead.

When I tried with the cake flour, I liked them even more! I can assure you that both work just fine, because most people don’t have cake flour just lying around. But if you want these to be a bit lighter, cake flour is definitely the way to go. 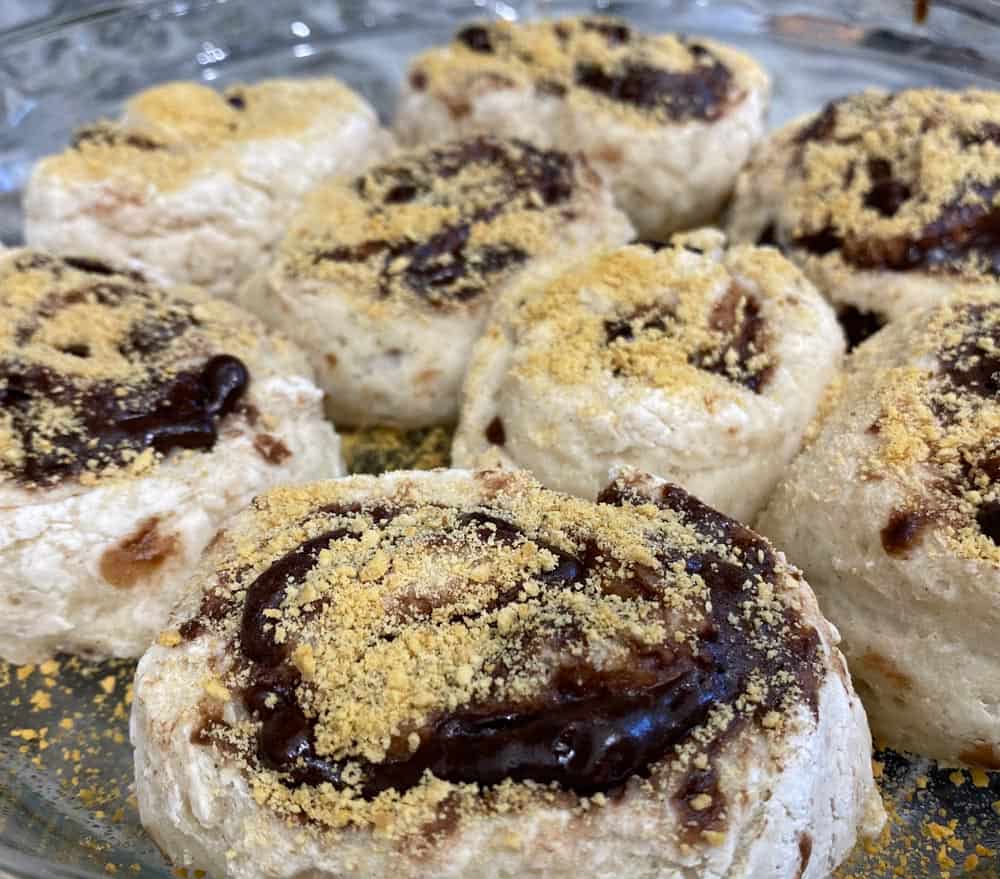 A common question I see popping up about the Greek yogurt dough is that it’s too sticky. This is where things get a bit tricky, because every single brand of Greek yogurt is different! Some are just thinner & contain more liquid, so it might lead to a stickier dough.

Lately, I’ve been doing most of my recipes with a whey/casein blend, because it lends itself much better to baked goods. With a whey protein powder, baked goods tend to dry out pretty quickly.

That being said, I tested both with this recipe, and the pure whey protein worked out much better!

Since we’re not actually baking with the protein powder, rather using it in the chocolate sauce and the icing, it works better. The chocolate sauce ended up being more spreadable, and the marshmallow icing was a perfect consistency.

With the whey/casein blend, the icing wasn’t quite as sticky. That might sound appealing, but for a marshmallow topping, sticky is what we want! 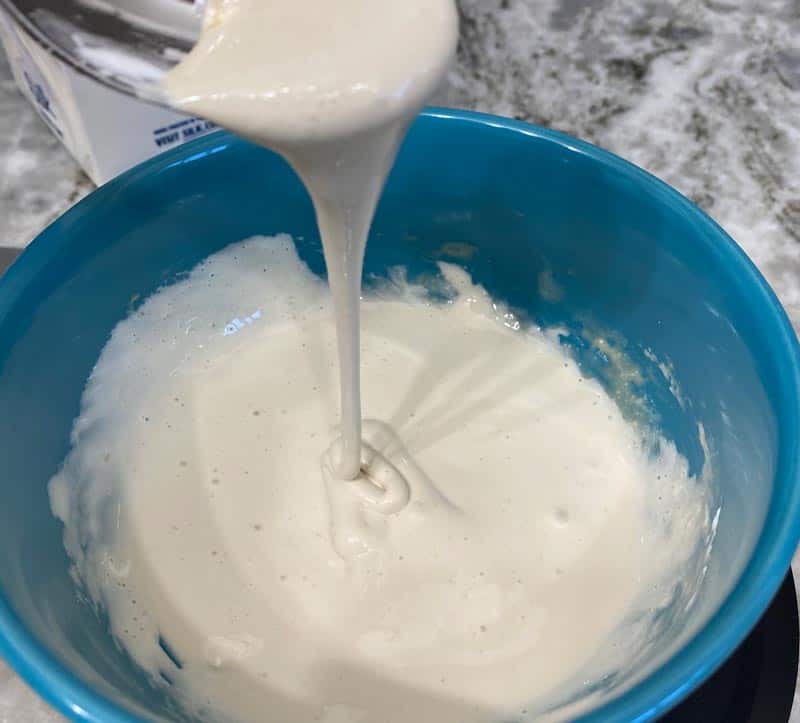 The taste was great with both, but I definitely preferred the regular whey protein version. Don’t worry, the recipe card has a quick note in the directions regarding a slight change if you go with a whey/casein blend.

Can I leave the protein powder out altogether?

You certainly can. In all honesty, I might advise you to try to find a different recipe if you don’t want to go the protein route, but it can certainly be done. For the icing, I would just thin out some marshmallow fluff with a little milk and/or light butter, and for the chocolate sauce, just add a little more cocoa powder and cut the butter down.

You’ll have to experiment a little bit, but it can definitely work! 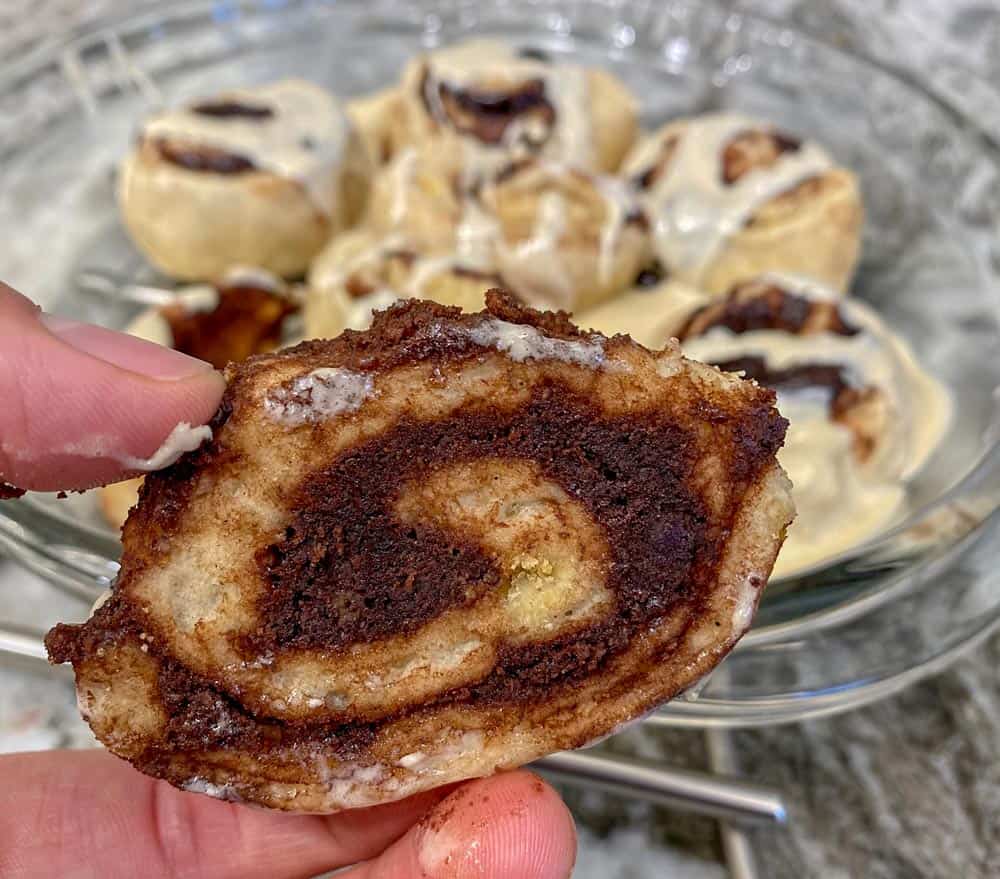 These rolls were best fresh out of the oven, but I did test them out the following day and they were still great. They stayed nice and soft in a tupperware on the counter, but they also worked great reheated about 10 seconds in the microwave.

I wouldn’t recommend leaving the icing off of these- it may be tempting if you’re looking to save calories, but it really helps to add some moisture to the final product.

If you do want to save some calories, I’d say you could make a very simple glaze by mixing powdered sugar substitute & milk. But of course, then you won’t have the marshmallow flavor that we have here!

If you leave the marshmallow icing off, the final count for these would be 120 calories, 2g fat, 20g carbs, and 6.5g protein.

There are two types of people…

I don’t care about it looking pretty, I care about having tons of icing on mine!

But, to each their own. 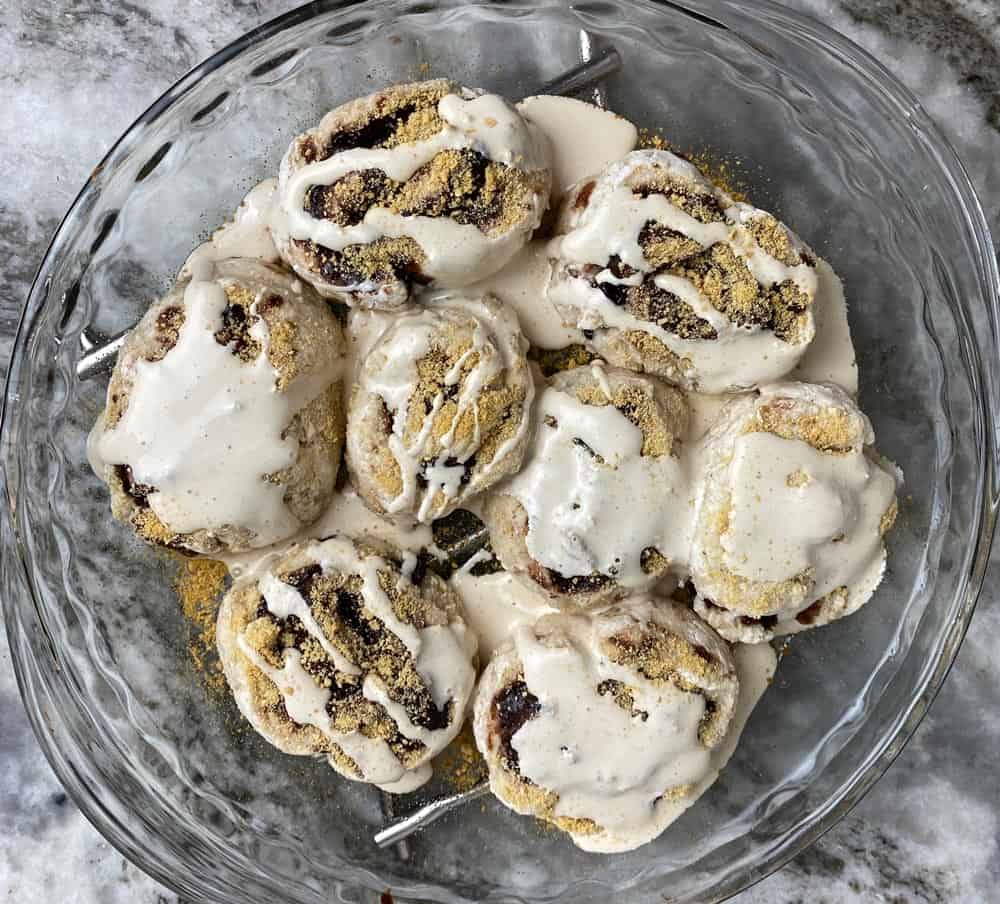 This recipe makes 8 rolls, and they’re all a decent size. Not Cinnabon sized, I grant you, but not tiny either! If you want to make these slightly larger, I recommend cutting the dough into 6 rolls instead of 8. If you do that, each roll is…

Now get yo roll on!

Haha, these are a nice easy one for the family to make, too! Glad you guys enjoyed them.