Seafood is generally a very healthy food to incorporate into your diet. With most options being very high in protein and low in fat, seafood is a great low-calorie option.

When it comes to sushi, there are lots of other ingredients, so exactly how healthy is sushi? What about sashimi? Let’s break it down and figure out which types of sushi and sashimi are the healthiest options to order at sushi restaurants.

Sushi vs Sashimi: what’s the difference? 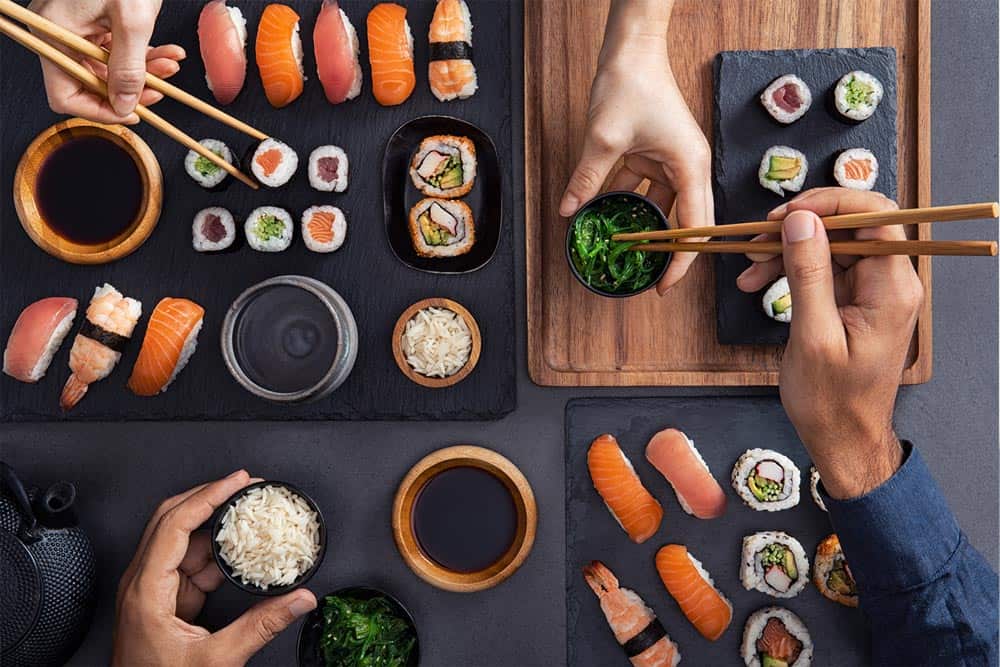 Sashimi is often described as a type of sushi, which is technically correct, but they are quite different. What makes sashimi different than traditional sushi?

To put it simply, sashimi is thinly sliced raw fish. Sushi, on the other hand, does not exclusively contain raw fish. While it is the most common form of “traditional” sushi, you may find cooked sushi (like Shrimp Tempura) or sushi containing no fish at all, like a Cucumber Roll.

And of course, a sushi roll will contain rice and other vegetables as well wrapped up into a roll.

There are two main types of sushi: maki sushi and nigiri sushi. Maki is a traditional sushi roll that contains fresh fish, vegetables, and rice, and is rolled up in seaweed. Nigiri is thinly sliced fish, similar to sashimi, served over rice. When you see a piece of fish laying on top of the sushi, that is a nigiri roll.

For these purposes, we’ll be looking at maki & nigiri options together, with sashimi options being separate.

Should you order sushi or sashimi when dieting?

When you’re dieting, your goal is to be in a calorie deficit. In other words, you’re trying to keep your calories relatively low. Is sushi or sashimi better for that?

Technically speaking, sashimi is the better choice on strictly a calorie basis because it contains only seafood. Sashimi is low calorie and carb-free, meaning it’s also suitable for a keto diet.

With that being said, sushi is certainly not a bad option. We’ll break down the different types of sushi rolls below, but you’ll see that the calories can vary greatly depending on the type of sushi you order.

The main difference between sashimi and sushi is that when you order a sushi roll, you’re also getting white rice with your fish. When you add rice into the equation, you’re adding in extra carbs and calories while removing some of the protein that you’d be getting if you had ordered the same size portion of sashimi.

Will sushi fit into your diet? 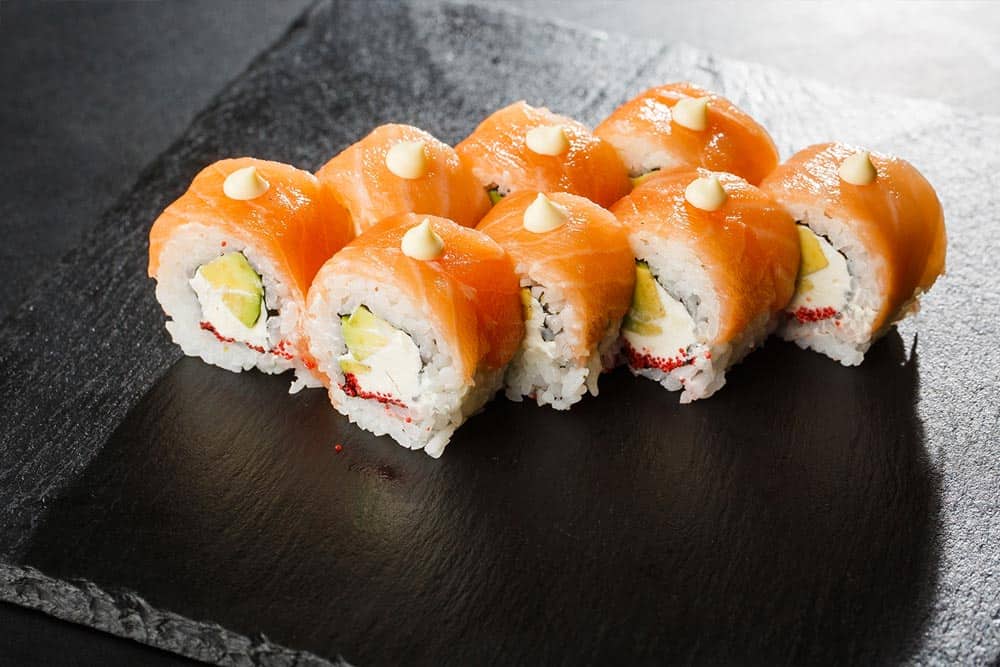 Depending on who you ask, you’re going to get different answers as to whether or not sushi is healthy

It’s tough to argue that you can’t have sushi as part of your diet. Sushi is made of great ingredients like healthy fish, rice, vegetables, and minimal sauces for dipping.

However, there will be those that claim that sushi is not healthy because it is high in carbs from the rice. Or, they may claim that they are ” bad carbs” because of the sticky rice.

Even though sushi does contain rice, it is quite low calorie compared to other takeout options out there, and seafood is packed with omega 3 fatty acids (healthy fat) that are great to incorporate into any healthy diet.

One other sneaky benefit to eating sushi while dieting is that sushi rolls are meant to be enjoyed slowly and socially. When you’re dieting and calories are at a premium, there are two things that will really help you: focusing on volume, and slowing down to help listen to your hunger cues.

Because of this, I find sushi to be a great addition to ANY diet. 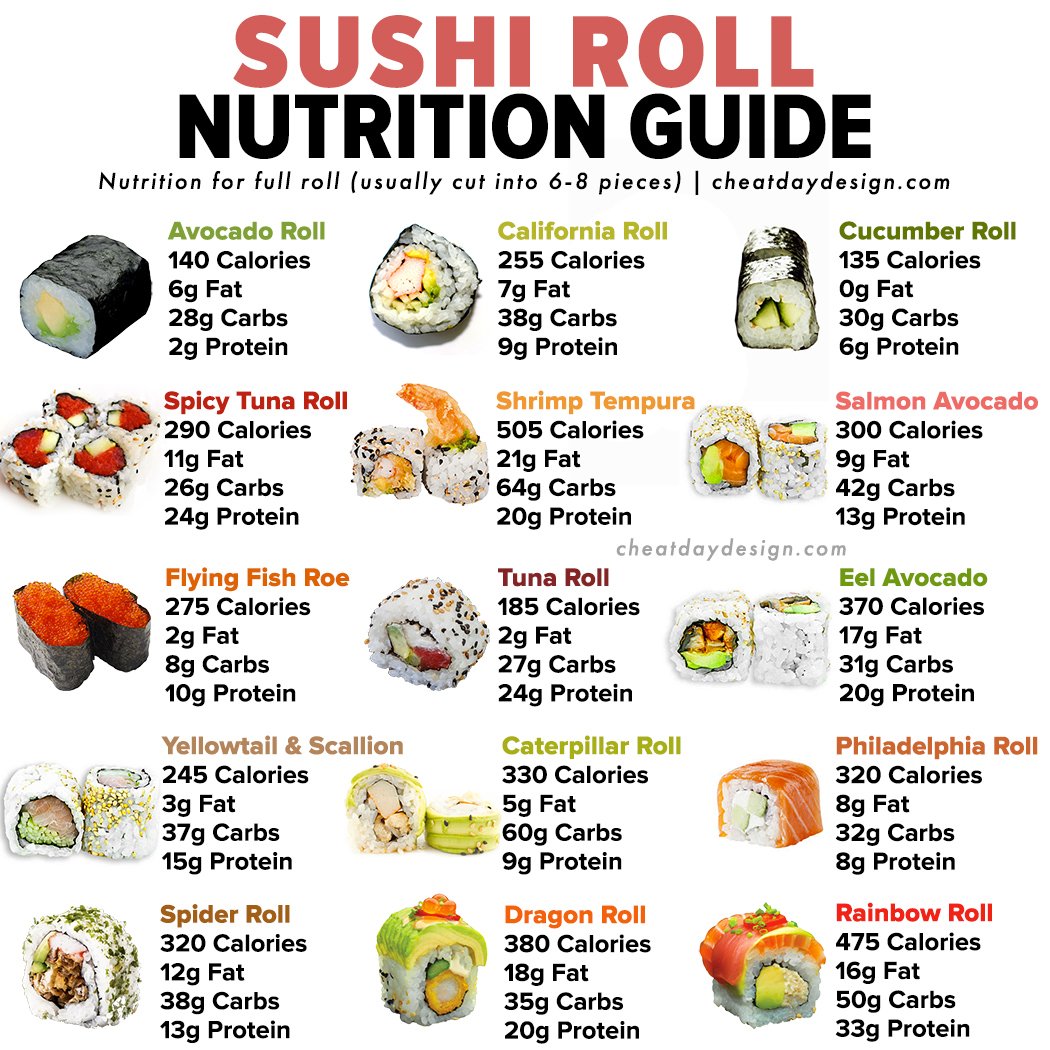 Depending on the type of sushi roll you order, the calories will vary. This is due to the type of fish used and the way it is prepared. It’s also worth noting that every restaurant will prepare sushi rolls slightly differently with their own unique ingredients, so these calories should be used as estimates only.

The calories listed here are for an entire sushi roll, which is typically cut up into 6-8 pieces. If you want to find the calories for a single piece of sushi, simply divide by the amount of pieces you have.

Which sushi is the healthiest? Well, that depends on your goals!

Sushi with the most protein

A rainbow roll has a piece of fish on the outside (this can be salmon, but is most often spicy tuna), which is what is contributing to the higher protein here. The inside contains avocado, cucumber, and crab.

The Tuna Roll deserves an honorable mention here because it actually gives you more bang for your buck. While it contains 24g of protein compared to 33g in the rainbow roll, the tuna roll contains fewer calories at only 185 total.

Sushi with the lowest fat

A cucumber roll is exactly what it sounds like- cucumber rolled up in sushi rice and seaweed. Since it is made up of only rice and a vegetable, it should come as no surprise that it contains no fat.

Sushi with the lowest calories

A cucumber roll not only contains the lowest fat, but also the fewest calories. An avocado roll swaps the cucumber out for avocado, giving it slightly more fat. Even still, the avocado roll contains only 140 calories, making it a low-calorie option.

Many people assume a California Roll will be the healthiest or lowest in calories because it is mostly vegetables with crab or imitation crab, but that is not necessarily the case. The calories in a California roll are on par with other sushi rolls, but it contains much less protein than other sushi rolls containing similar amounts of calories.

Sushi with the highest calories

Shrimp tempura contains shrimp that has been battered and deep-fried, leading to higher calories than all other sushi rolls. If raw fish is not your style, fried shrimp may be more appealing to you, but be aware of the extra calories, which are double many other sushi rolls.

How to save calories when eating Sushi

While you typically won’t be making substitutions when ordering sushi, there are a few words to look out for if calories are a concern…

Tempura: If you see a sushi roll with tempura, it means that the fish is deep-fried with a heavy coating. It’s absolutely delicious but can pack in the calories.

Looking at our sushi nutrition guide above, we can use the Shrimp Tempura Roll as an example. With 21g of fat and 505 Calories, it has the highest amount of calories and fat of any of the sushi rolls compared.

Sauces/Mayo: You’ll find a lot of heavy sauces or mayo when you order sushi, and it’s important to keep in mind that these condiments can contain quite a large amount of calories. A spicy mayo topping can easily add 100 calories to any sushi!

If calories are a concern, stick with some of these lower calorie options: wasabi, soy sauce, or sriracha. 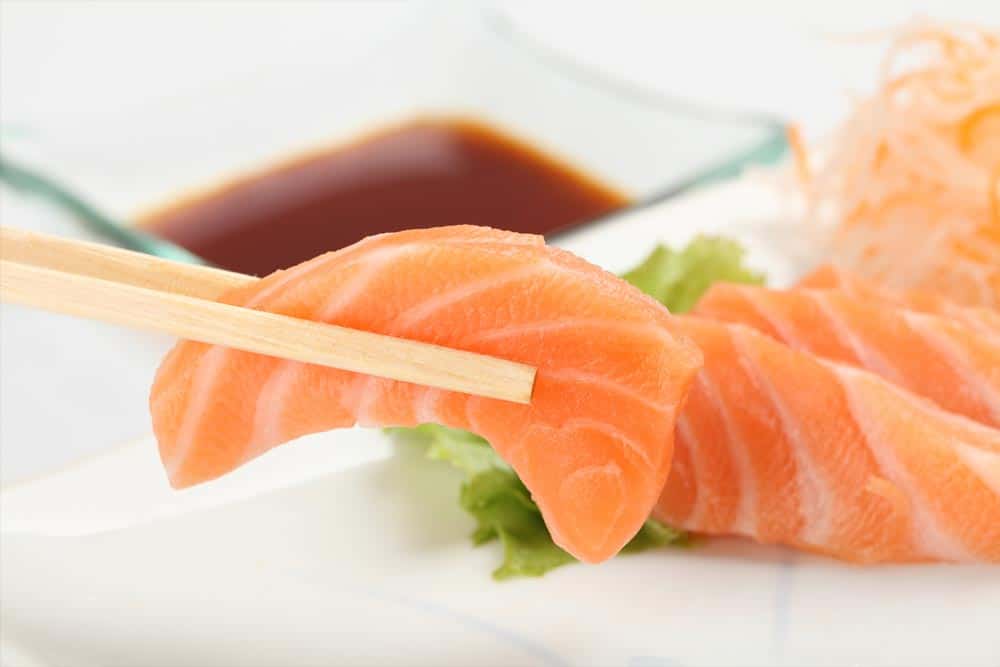 If you’ve ever gone out for sushi, you’ve likely seen “sashimi” on the menu as well.

Sashimi is simply taking the fish that you’d normally find in sushi, and serving it on its own without the rice.

If you’re watching your carbs or ever wondered what sushi you can order on the keto diet, sashimi is for you!

It’s going to be lower in calories & carbs than traditional sushi rolls, so you’ll likely find many more options that suit your diet. 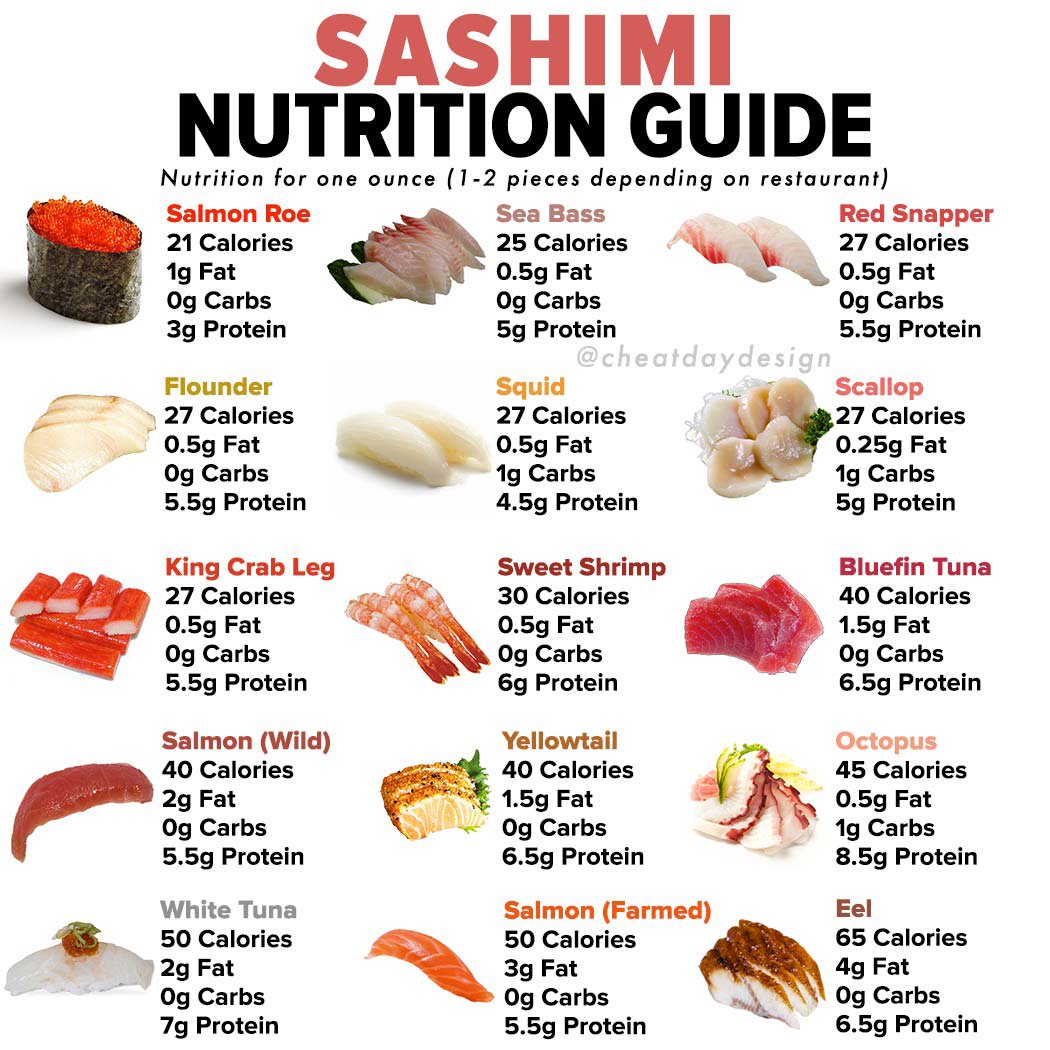 Since sashimi is so low in calories and packed with protein, there are tons of healthy options for sashimi out there!

Sashimi is carb-free, so it’s suitable for any low-carb or keto diet. But since there are no carbs, that means that the protein and fat content can really vary.

Quick note on serving size: there is no hard-set rule for sashimi. Depending on the restaurant you go to, you’ll have slightly different sized portions. It is likely that one piece of sashimi will be close to one ounce, which is what is listed here, but it is certainly possible to have a very thin slice that is closer to 0.5oz.

Each piece of sashimi is quite similar in terms of calories, but Salmon Roe technically wins here with 21 calories, 1g fat, and 3g protein. If eating salmon eggs is not your style, the sea bass, red snapper, flounder, and any other white fish will be great options.

Sashimi with the lowest fat

Many sashimi options are very low in fat, with most white fish options containing only 0.5g fat per piece. When you order sashimi, you’ll likely get a few pieces, but that fat content will still be very low.

Sashimi with most protein

Almost all sashimi is going to pack a fair amount of protein, but if you’re looking for the highest, octopus is the way to go!

Sashimi with the most calories

Eel has roughly 4g of fat per ounce. While serving sizes will vary, it’s safe to assume that you’ll enjoy at least 4oz of sashimi at a time. In this case, the Eel would be 260 Calories & 16g of Fat. That’s still quite healthy in my mind, especially considering it also packs in 26g of protein, but that may be more calories than you are looking for.

Conclusion: is sushi or sashimi healthier? 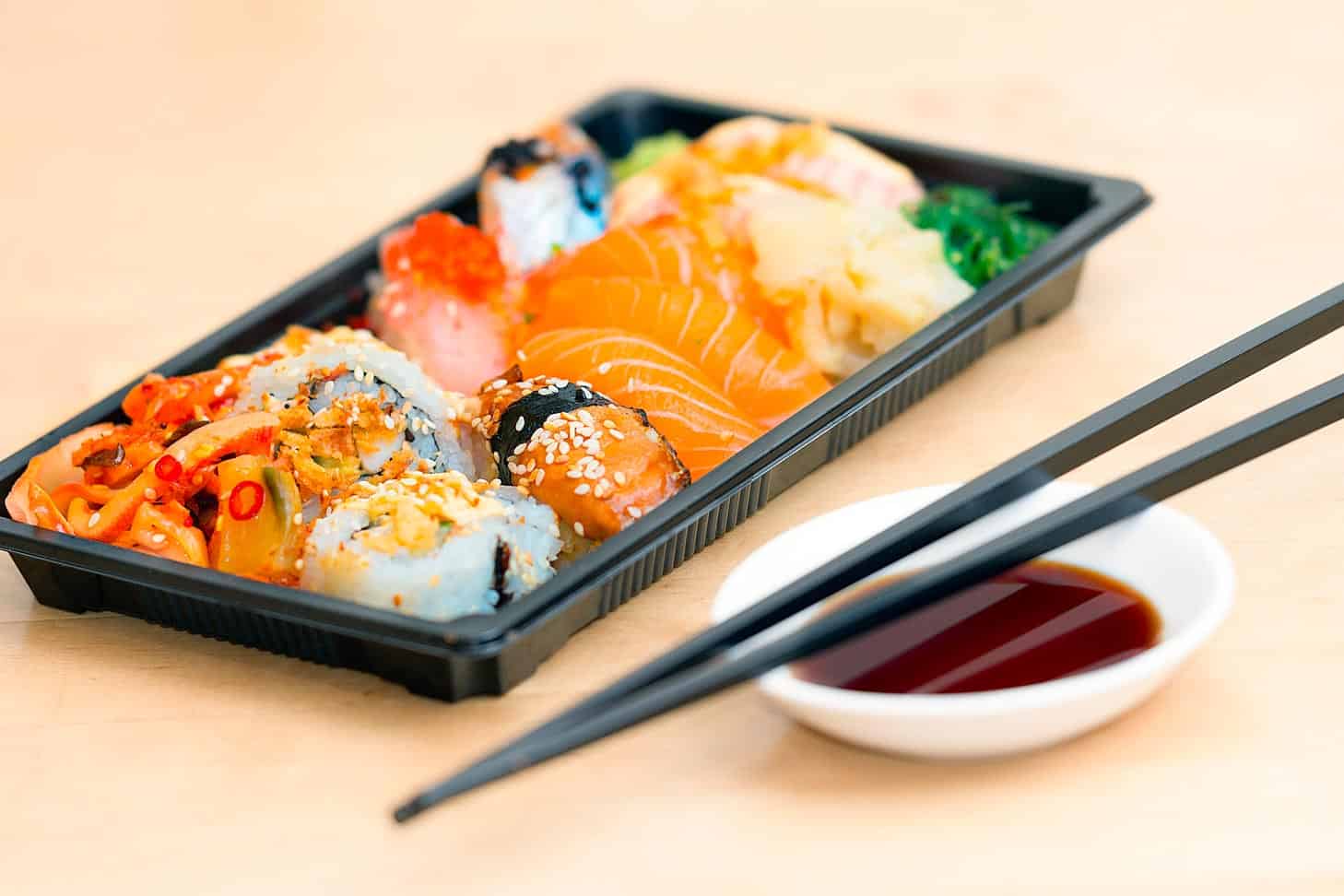 I’m all for making your own decisions when it comes to diets. I always preach eating foods you enjoy, and I don’t believe that any foods should ever be called “bad.”

That being said, if you’re dieting, you’re going to be looking for lower-calorie options, and it’s no secret that sashimi is the winner here. Across the board, sashimi calories are going to be lower than sushi calories.

Plus, if you’re enjoying sushi as part of a post-workout meal, the additional carbs from rice may be hugely beneficial to your recovery.

Personally, I would choose sushi over sashimi, even when dieting. Sure, the sushi calories are a bit higher, but in my mind, that’s going to be more enjoyable as a meal.