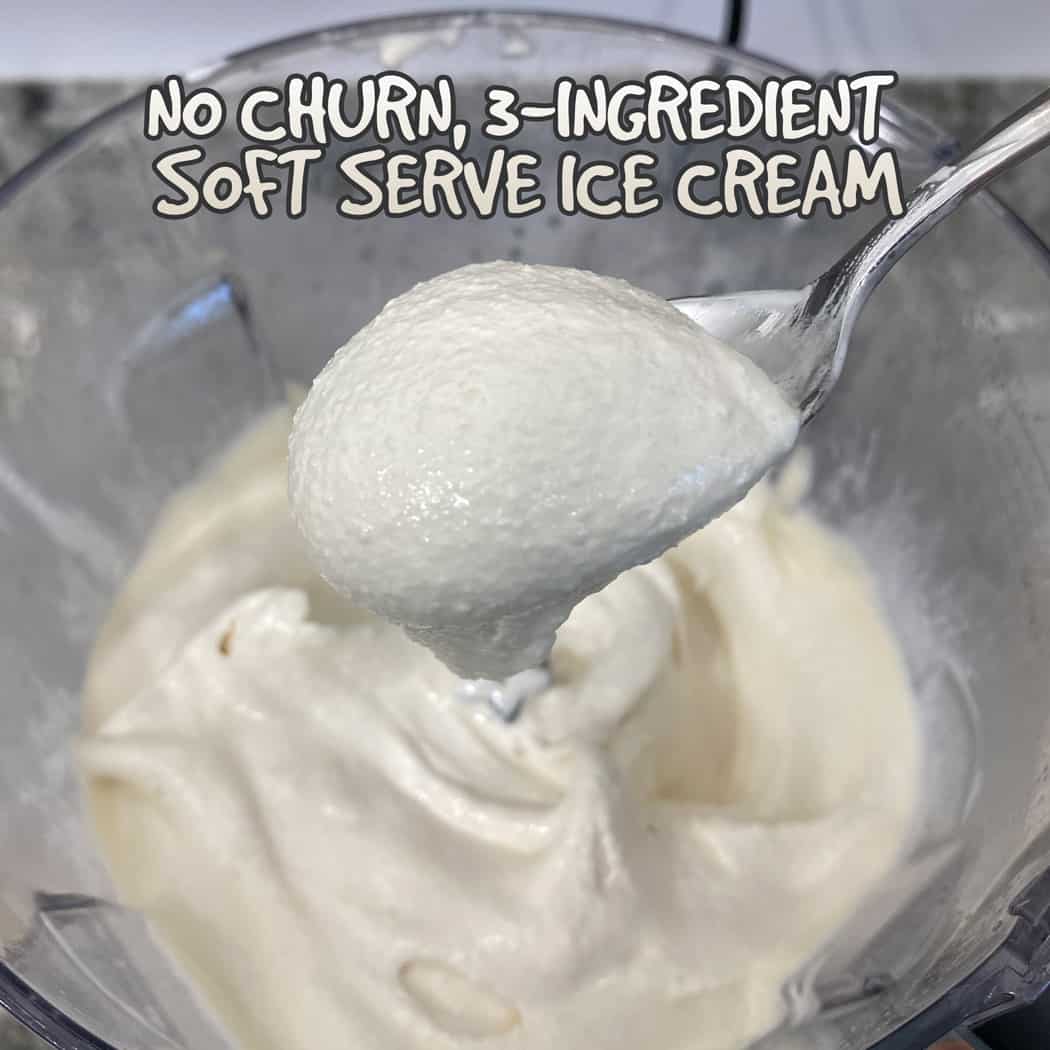 I’ve stumbled into a recipe that is officially a staple in my diet. I LOVE soft serve ice cream, but without an ice cream maker, it’s not very easy to make your own. Especially not a healthier version!

When it comes to “healthy” ice cream, or protein ice cream, you’re left with two options:

And my friends… I’ve accomplished exactly that.

And the ENTIRE batch of ice cream is only 300 calories with 0g of fat and 24g of protein! On par with any “protein” ice cream you’ll ever find!

Even better, you need just 3 ingredients to make this magic happen!

I recently learned that you can whip evaporated milk into a whipped cream rather easily. Just combine it with some powdered sugar and whip it up with a hand mixer. I’ve seen people then freezing that to make ice cream, but when I tried that, it just froze into a complete rock. Not at all what I wanted.

It whipped up nicely initially, which got me thinking: what if I freeze the evaporated milk first, THEN throw it into a food processor to blend & whip it into an ice cream?

I’ll admit, I did not expect it to turn out, but I think it’s safe to say that it came out beautifully.

If you only have a blender, that will probably work, but a good food processor changes everything. I’ve recently started using this Ninja food processor and it has changed everything for me. If you want a really smooth result, I highly recommend picking up a quality food processor!

Why these specific ingredients?

You’re going to be tempted to substitute ingredients, so I’m going to tell you exactly why I use each ingredient I used. If you want the same result I got, I wouldn’t make substitutions. That being said, I did experiment with 2 different dairy free versions, which I’ll break down in more detail after this!

Throw in a pinch of salt, and you’re good to go! I’ve tried other ice cream recipes in the past that require you to make a mixture, add to the freezer, mix it up again, add it to the freezer again, and continue repeating until you have the consistency you want.

I don’t know about you, but I’m not trying to spend all day making ice cream. Instead, this recipe is just prep, wait, and make! You just make the mixture, let it completely freeze, then blend it up. Easy as that! 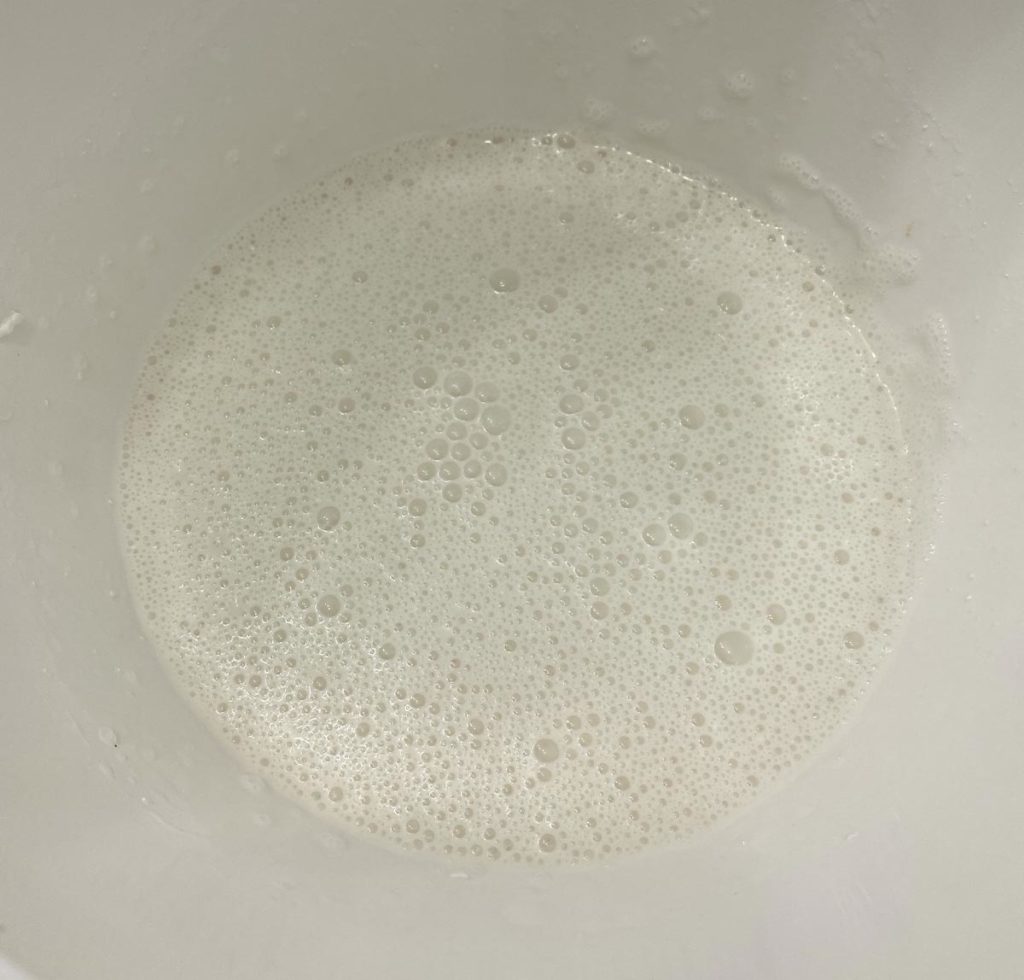 Step 1: Mix together the milk, vanilla extract, powdered sugar, and a pinch of salt. Give it a quick whisk to mix everything well. 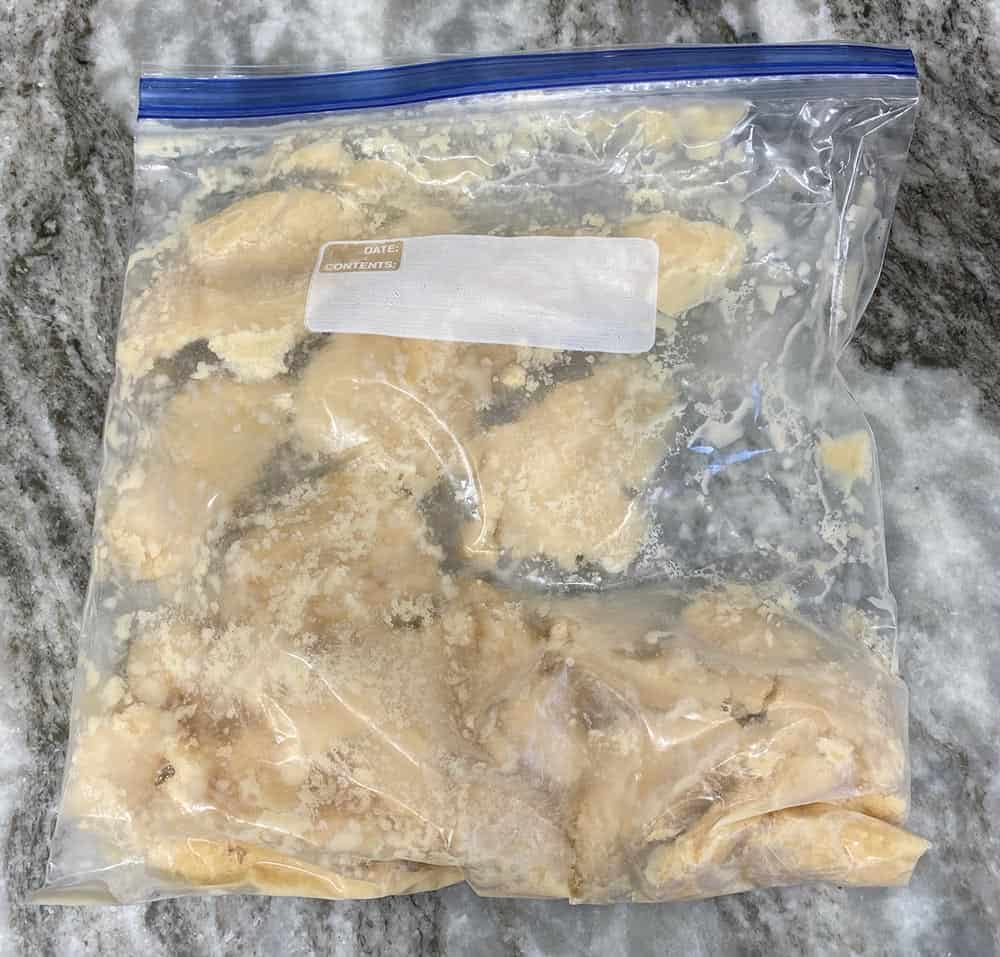 Step 2: Pour your mixture into a large freezer bag and seal it tight without any air, then let it fully freeze. I like this method because it makes it super easy to break up the frozen mixture rather than trying to blend a large frozen block (note that you can use an ice cream tray as well) 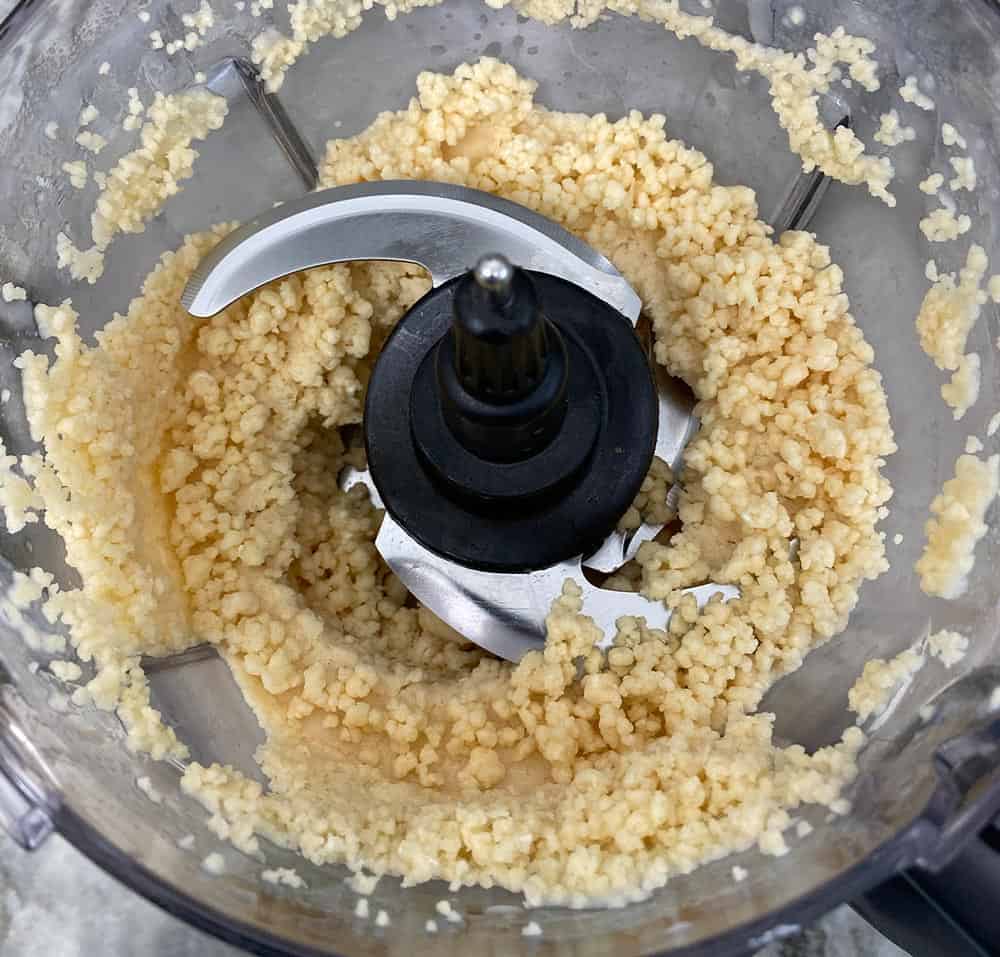 Step 3: Add the pieces of the frozen mixture to the food processor and let it run for about 30 seconds. It’s going to be crumbly and not quite ice cream… yet! 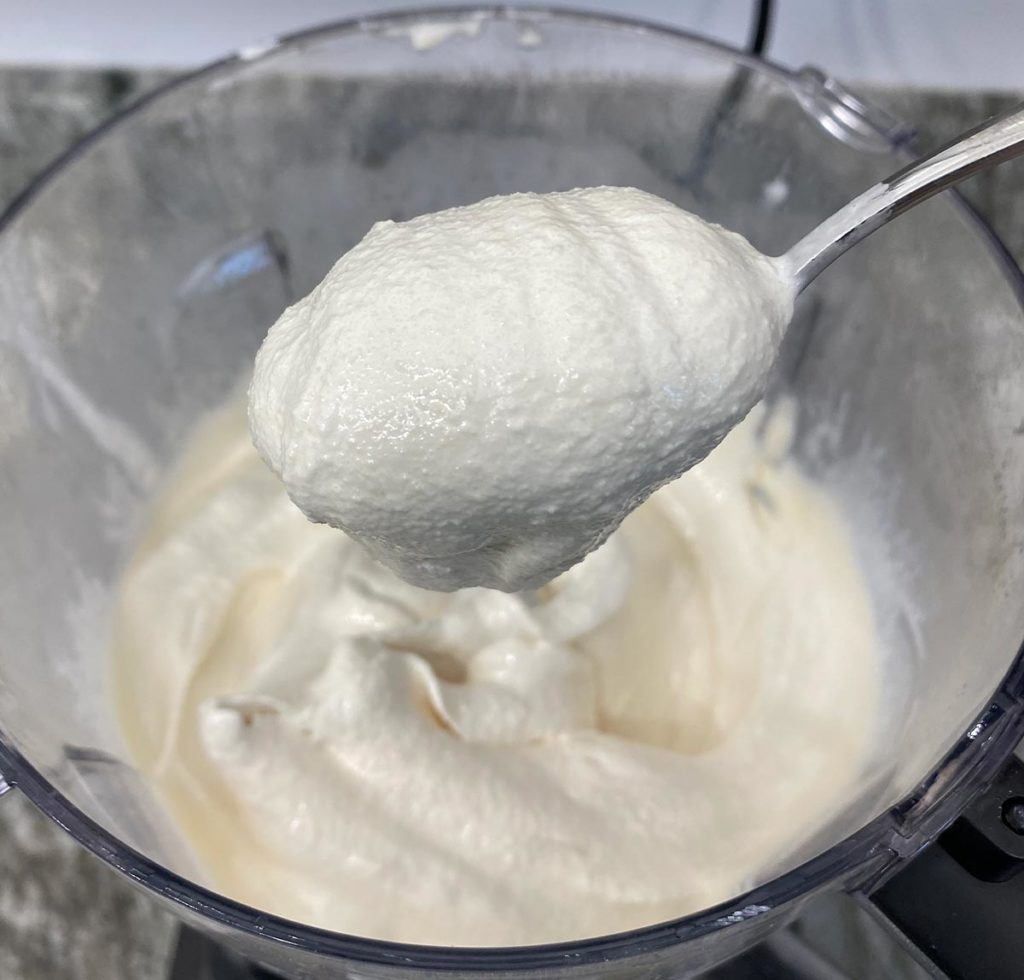 Step 4: Add 1-2 tablespoons of milk to the food processor and run it on high until everything blends up into a smooth, fluffy ice cream!

When I first made this ice cream and saw that is made some weird, Dippin Dots style ice cream, I was ready to dismiss this as a failed experiment. But out of curiosity, I added a tablespoon of milk, and slowly watched as the yellow pebbles blended up into smooth, white, vanilla ice cream.

I love soft serve, so I dove into the ice cream just as is. But as an experiment, I froze some of it to see how it would hold up. The best way to re-freeze the ice cream is in a container that you can tightly cover. Air is the enemy of ice cream, and it will turn your ice cream into a rock if you’re not careful. I used plastic wrap to keep it tightly wrapped, and it worked pretty well. It hardened, but if you leave it out for a minute or two, it softens up enough to eat. If you’ve ever had a pint of “protein ice cream”, it becomes a similar consistency. 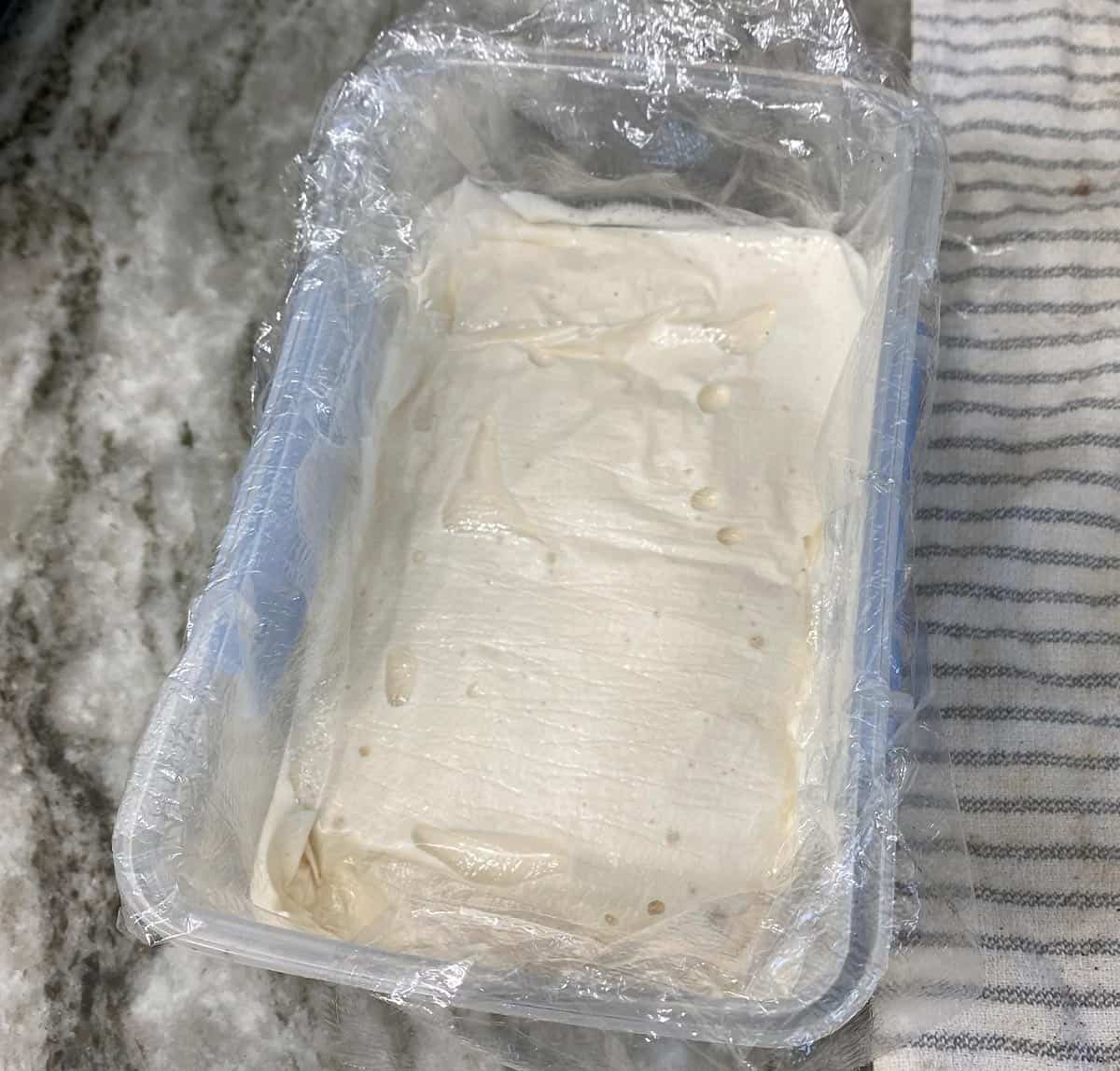 I tried two different dairy-free options, and I’ll add my favorite to the recipe card down below. But I want to show you what I chose to use, and how the end result turned out… 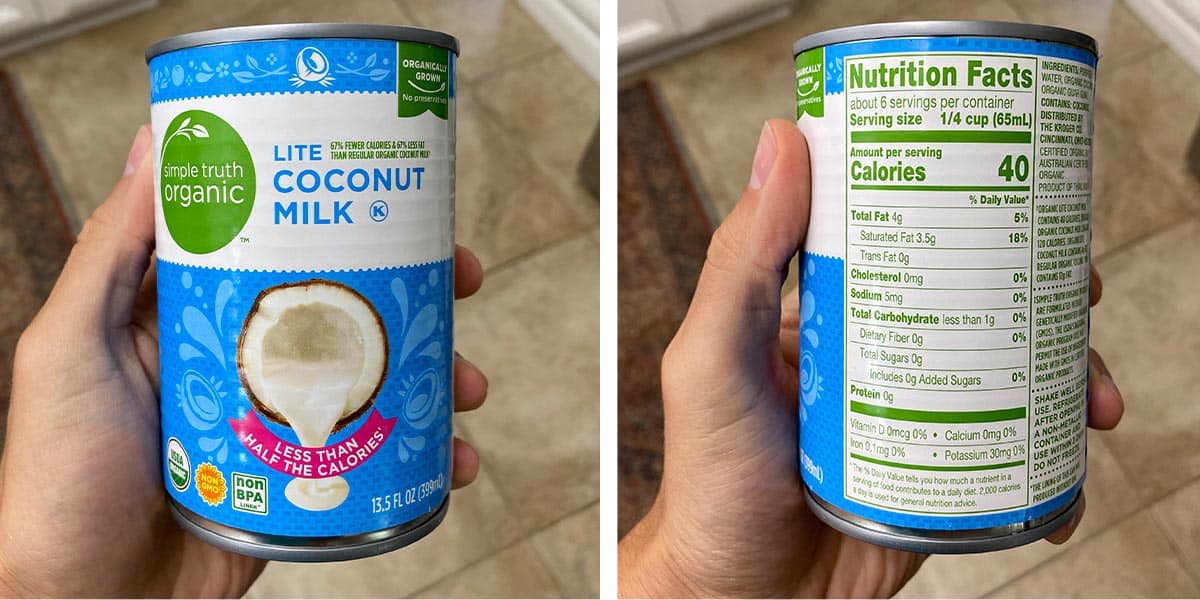 You could use regular coconut milk if you prefer, but the calories and fat will be much higher. Now, keep in mind that coconut milk has no protein, so there’s not going to be any protein in your ice cream. But that’s fine- just get your protein in elsewhere! When all is said and done, this ice cream weighs in at only 240 calories and 0g of sugar for the whole batch! Not too shabby if you ask me.

Follow the same exact directions as the regular dairy version, but when it comes to blending, you’re going to need an extra tablespoon of milk. The result is not quite soft serve ice cream, but still soft and creamy. Somewhere in between soft serve and scoopable ice cream, I’d say. Honestly, much better than I expected, especially for a dairy-free ice cream! 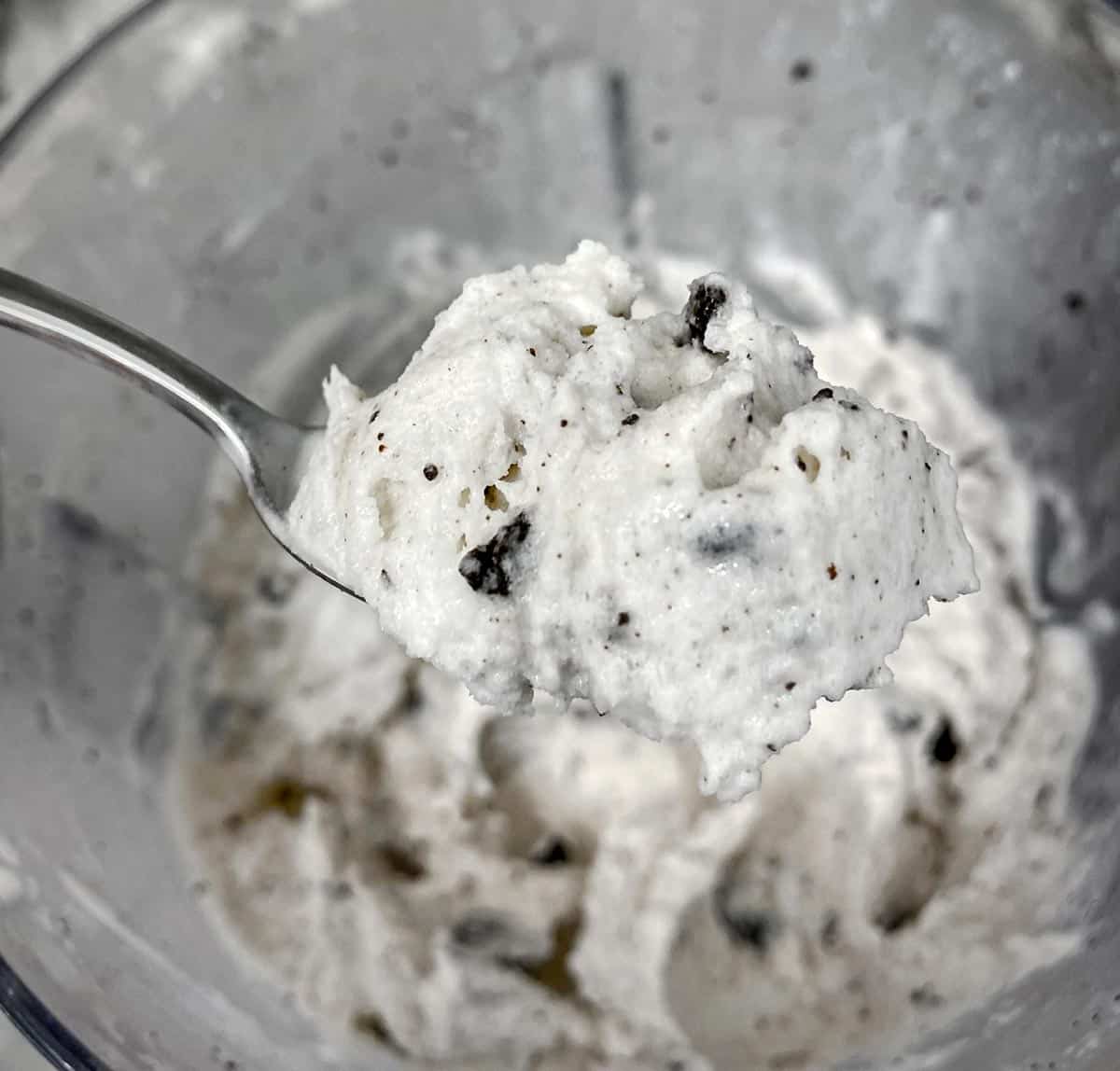 I added some Oreos to the food processor in this one to spice it up, but obviously that is optional.

While this isn’t quite the same soft serve, it was still quite good! I mean, I ate the entire batch and enjoyed it, so it couldn’t have been terrible. 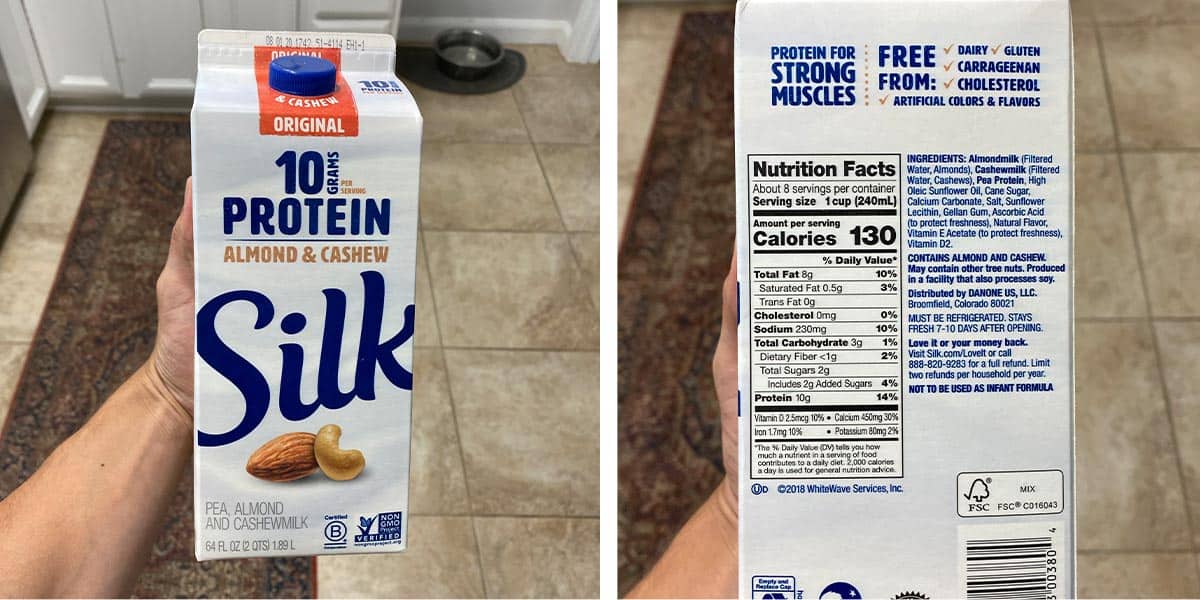 Can you use regular almond milk without any added protein? Probably, but I wasn’t willing to try.

The issue with nut milks is that they are very much water based. Remember, we use evaporated milk in the original recipe due to the low water content, so using a nut milk changes things up quite a bit.

I chose to go with this one because it’s creamier than typical almond milk, and obviously contains protein! This batch of ice cream ended up being 195 calories and 15g protein- not bad at all!

Much like the coconut milk version, this required a little bit more liquid. When it came to blending, I needed to add an extra 1/4 cup of milk to thin it out. Due to the high water content, this froze very solid and became almost like ice. 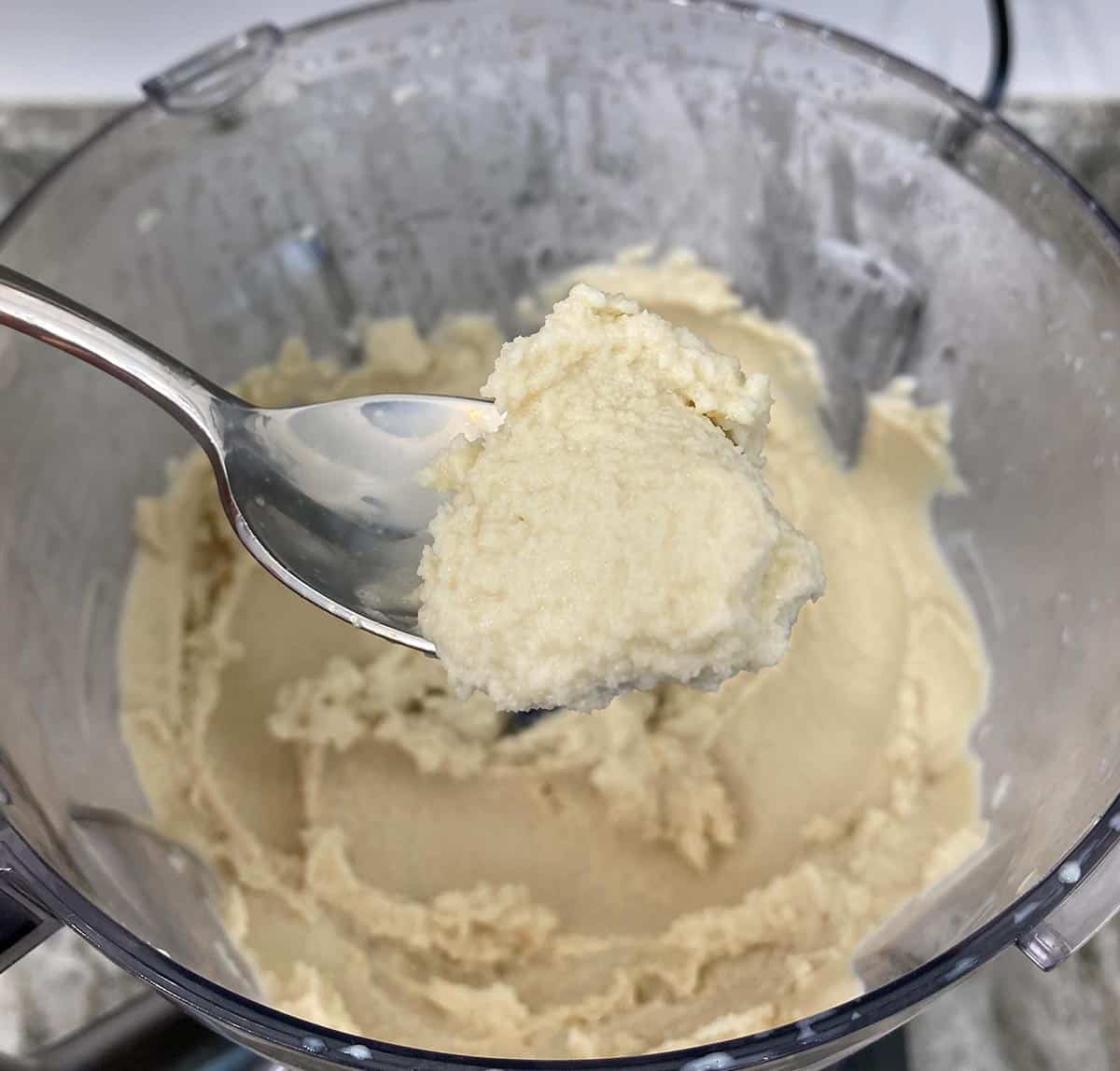 I’m not going to add this particular version to the recipe card, but you can follow the recipe exactly as-is and just swap out the milk you’d like! I used 1.5 cups of the Silk Protein, which is 12oz of liquid.

You can certainly try any other milk you have- even oat milk might work well here! But if you want a true ice cream, evaporated milk is definitely the way to go. If you need to do dairy free, coconut milk was by far my preferred milk to use.

This came out amazing. So delicious and I tried the oreo kind too. A couple of tips: get silicone ice cube trays with lids on Amazon. You can get 4 of them for under $10. This makes freezing and getting the frozen mixture out so much easier. I'm going to try to expand this recipe by including a tray of frozen half and half cubes. I also am going to use chocolate animal crackers instead of oreos to save on calories since the choco animal crackers from Dollar street taste like the chocolate cookie part of the oreo. Thanks for this recipe!

Can I use half milk and half evaporated milk to make it even lower in calories?

Let me know how it treats you!

Thank you so much! Glad you enjoyed this one :)

Thank you!! I agree, sometimes the banana flavor is just too strong, so I love this variation instead.