Skip to Content
Jump to Recipe
What if I told you that you could have an entire plate of breakfast food on one convenient pizza?

By transforming boring ol’ shredded hashbrowns into a pizza crust, we are going to make the absolute BEST breakfast pizza.

This recipe will require about an hour of your time, but I promise it’s worth it. Throw this together on a Sunday morning and impress everyone in your family! 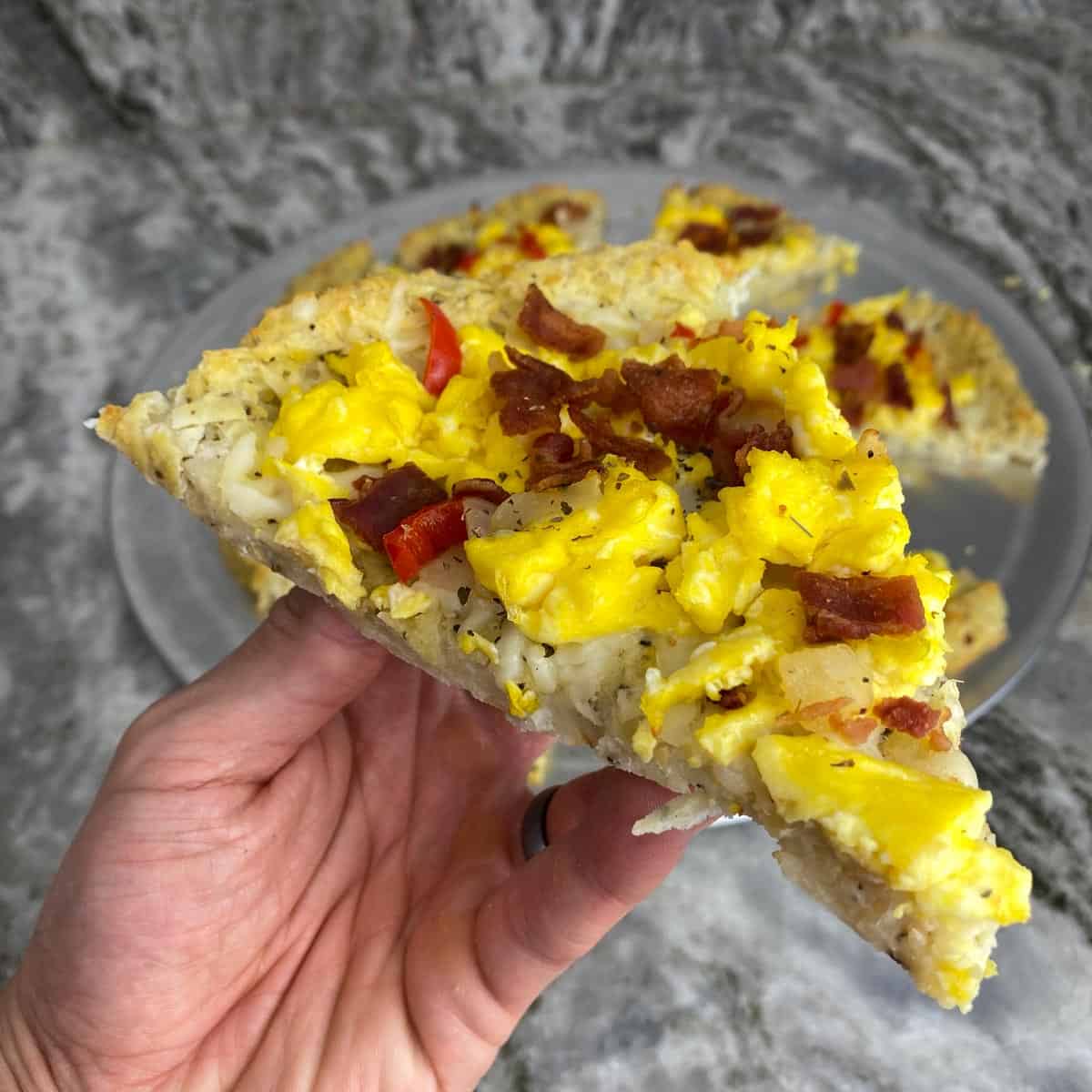 How to make the hashbrown breakfast pizza crust

We can’t just cook up shredded hashbrowns and form them into a breakfast pizza- the entire pizza would just fall apart if we were to do that.

Don’t worry, we only need to go through a few steps to make some magic happen. 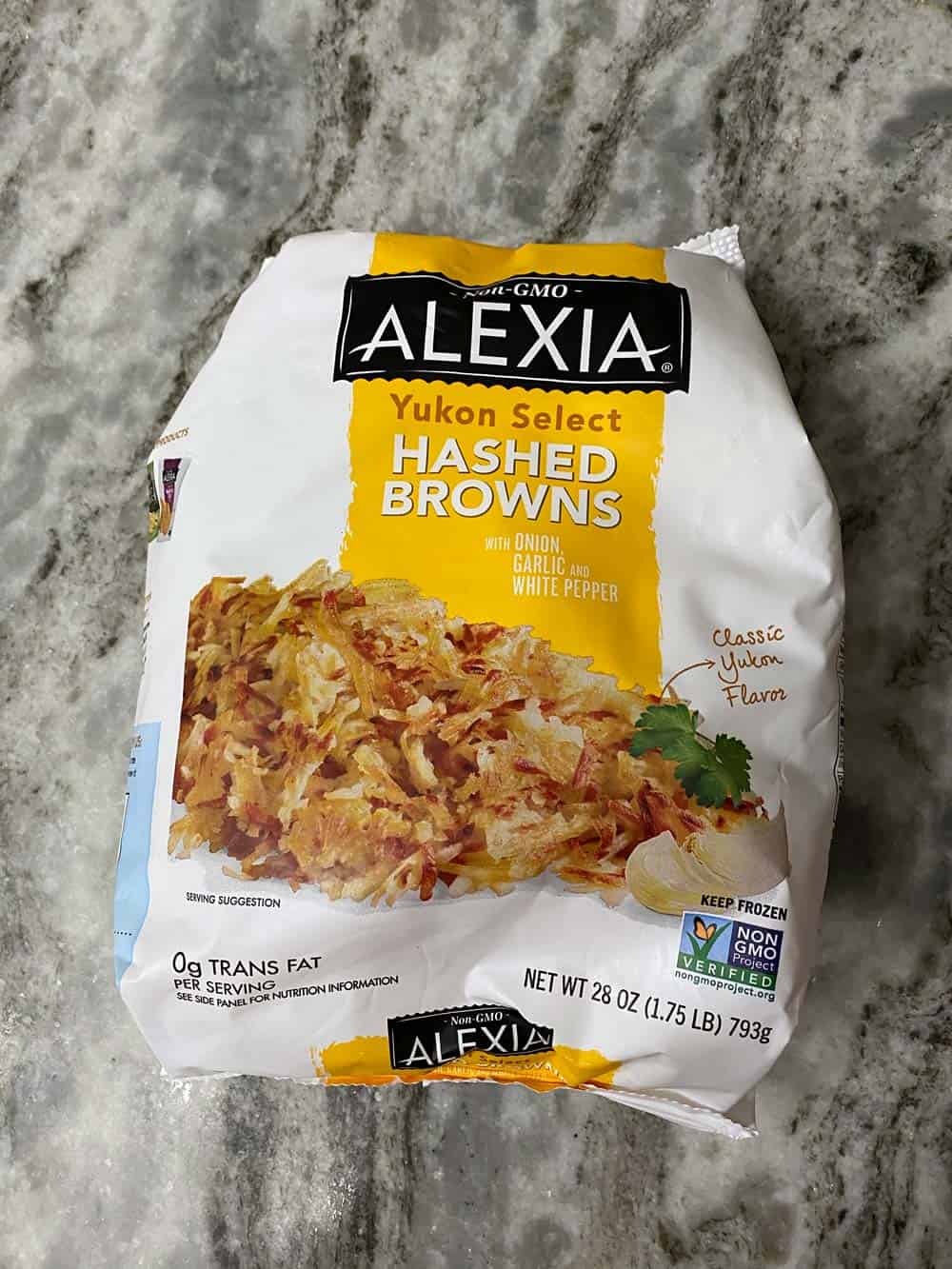 First thing’s first, we need to start with frozen shredded hashbrowns. Most bags will be 28-30 ounces, and either size will work just the same in this recipe.

To make the breakfast pizza crust, we don’t need to thaw the shredded hashbrowns at all. Simply take them out of the freezer and throw them into a large microwave-safe bowl, then microwave for 5 to 6 minutes. 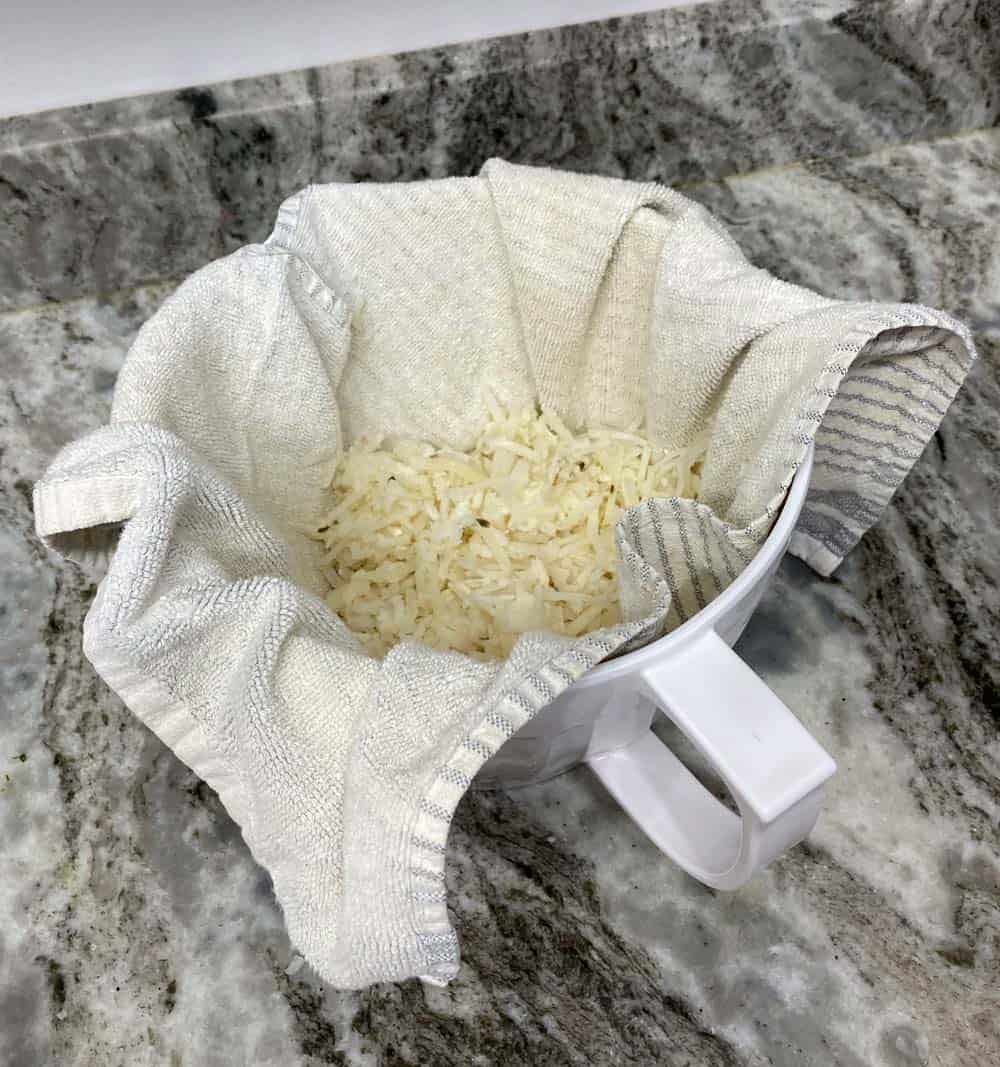 Microwaving the hashbrowns allows them to not only thaw, but soften up and cook a tiny bit.

Then, we pour them into a bowl lined with a towel, then squeeze out as much water as possible. 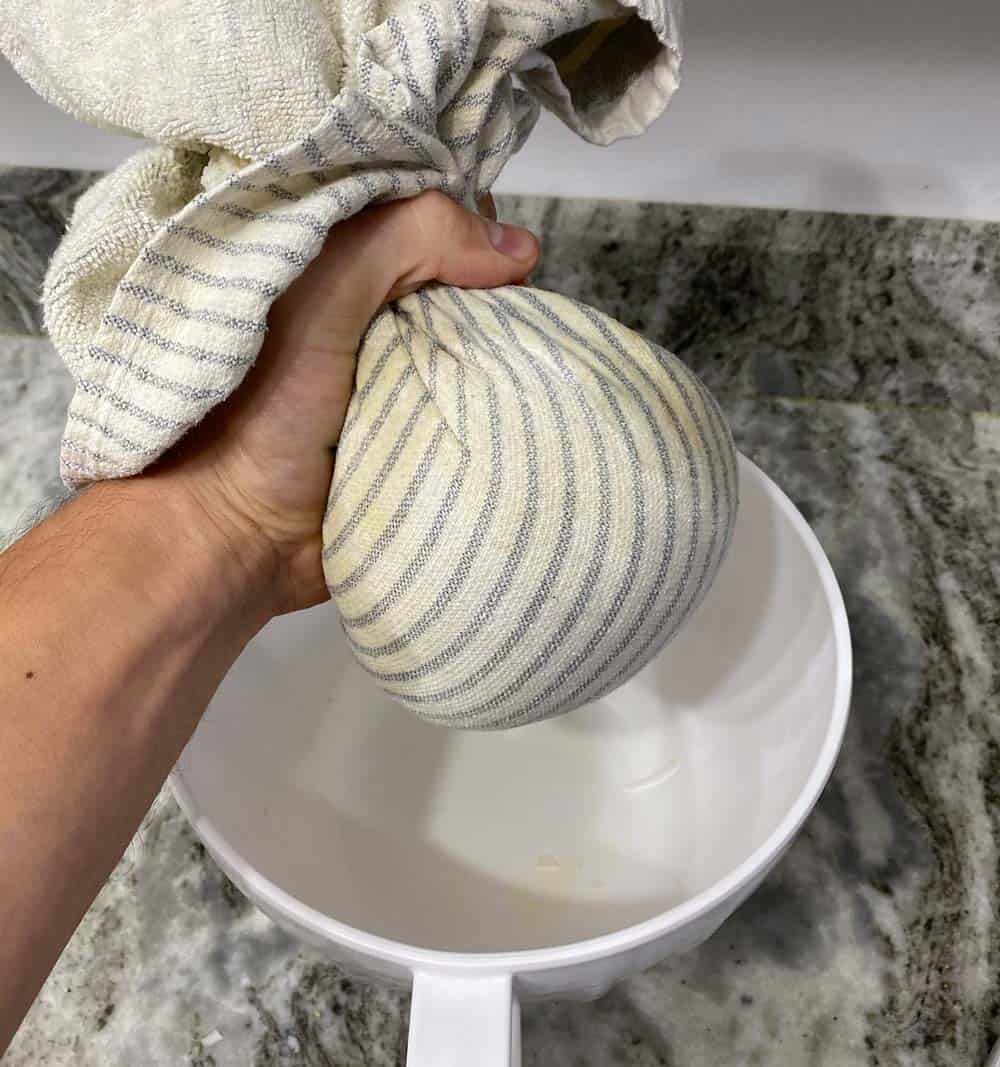 Why do we need this step? 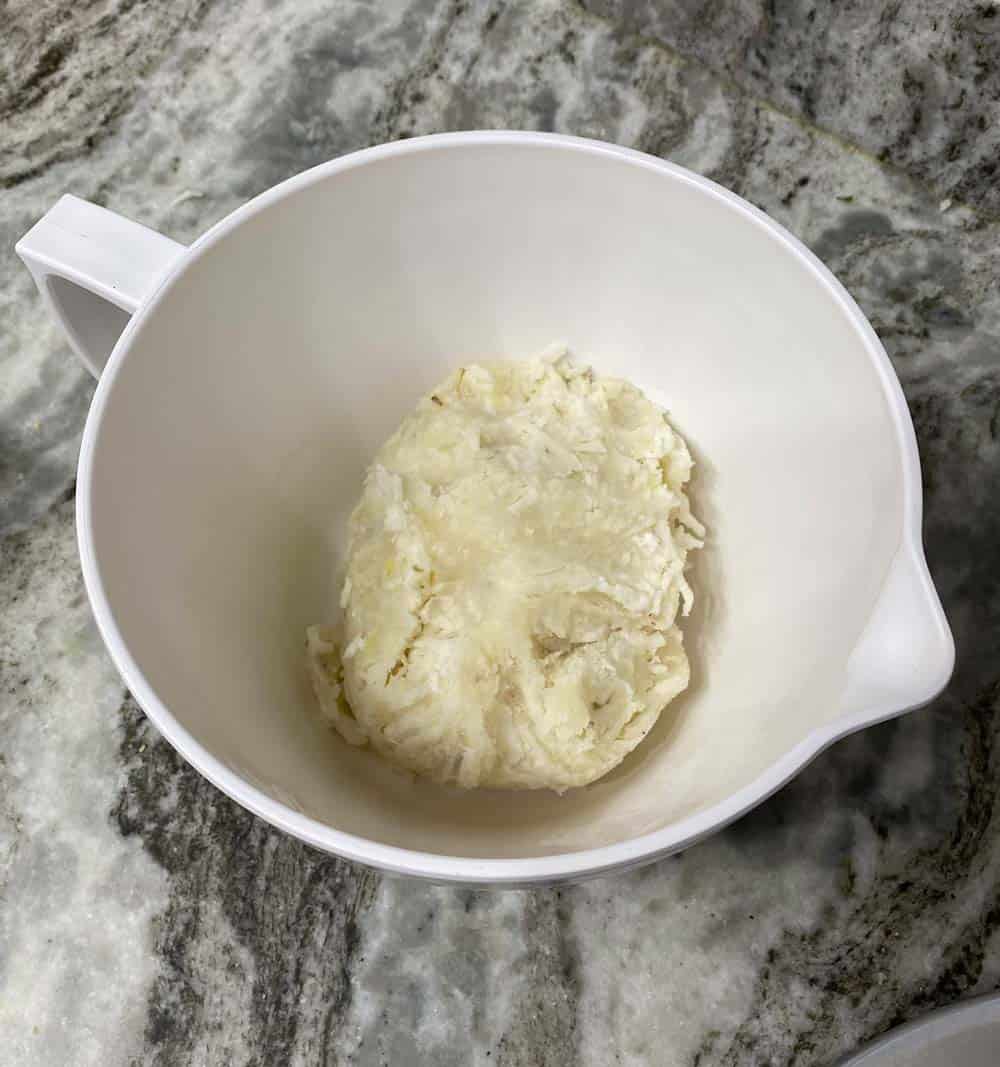 Once you squeeze the water out, it will resemble a ball of mashed potatoes with some shreds still left.

At this point, we just need to add our egg, egg whites, and seasonings to the bowl.

Then it’s time to get messy. Get your hands in there and work it out until everything is fully mixed. 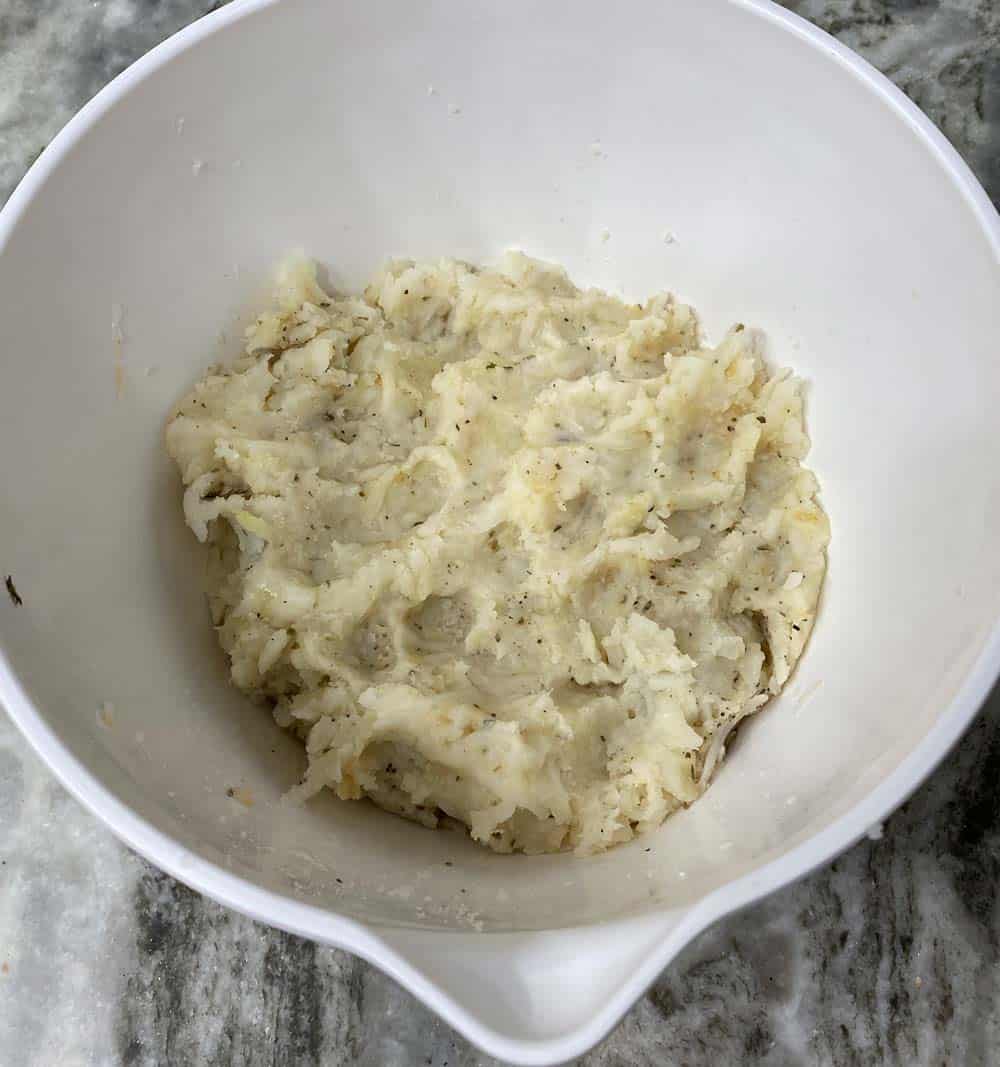 Why the crust needs eggs

Our breakfast pizza crust needs a binder. In other words, something needs to hold the potatoes together, or else we’re just going to have flimsy mashed potatoes.

The first time I tried this recipe, I used only egg whites. The crust held together okay, but the lack of fat in the egg really affected the final texture and it was not nearly as crispy as I would have liked.

By using 1 whole egg and 2 egg whites, we knock the calories down a tiny bit, but we still incorporate an egg yolk to help the binding and baking process.

For an even better result, you can use 2-3 eggs and no additional egg whites. This will increase the calories a tiny bit, but really not much, and the final breakfast pizza will be even better!

Forming the pizza and getting it crispy

Once we have our pizza dough, we’re going to add it to a nonstick pan or parchment paper. Use your hands to form it into a circular shape, leaving a thicker crust around the edge.

My pizza ended up being around 12″, but you can make the pizza as large as you’d like.

Note that overall, the pizza was pretty thin. If you go too thick on it, it won’t cook up as well.

We’re going to blast the breakfast pizza crust in the oven at 500 degrees F for about 25 minutes or so, but this is where you can play around a bit.

We want the crust to be almost done, but not quite. We’re going to be adding the toppings and baking for another 10 minutes after this.

However, everyone likes their hashbrowns at different doneness levels. If you like them very well done, check on the crust after 25 minutes. If it still seems too underdone for you, let it go for another 10-15 minutes or so to insure your breakfast pizza will be very crispy.

A note on pans and parchment paper

The first time I made this pizza, I thought I screwed it up majorly.

When it was done, the bottom of the pizza was still SO soft, even though the top was nice and crispy. I realized I made two crucial mistakes:

The second time around, I used the proper pan, and I lined it with parchment paper.

However, when my pizza was done, it was still stuck on the parchment paper.

Another failed attempt, I thought. But there was actually a very easy fix.

If you try to remove the pizza right out of the oven, you may find it sticking to the parchment paper. Let it cool for a few minutes and see if that does the trick. If it doesn’t, don’t worry!

If you’re worried about your pizza sticking, I recommend spraying your parchment paper with nonstick spray beforehand. That should save you!

After we bake the crust and get it browned up nicely, it’s time for topping. 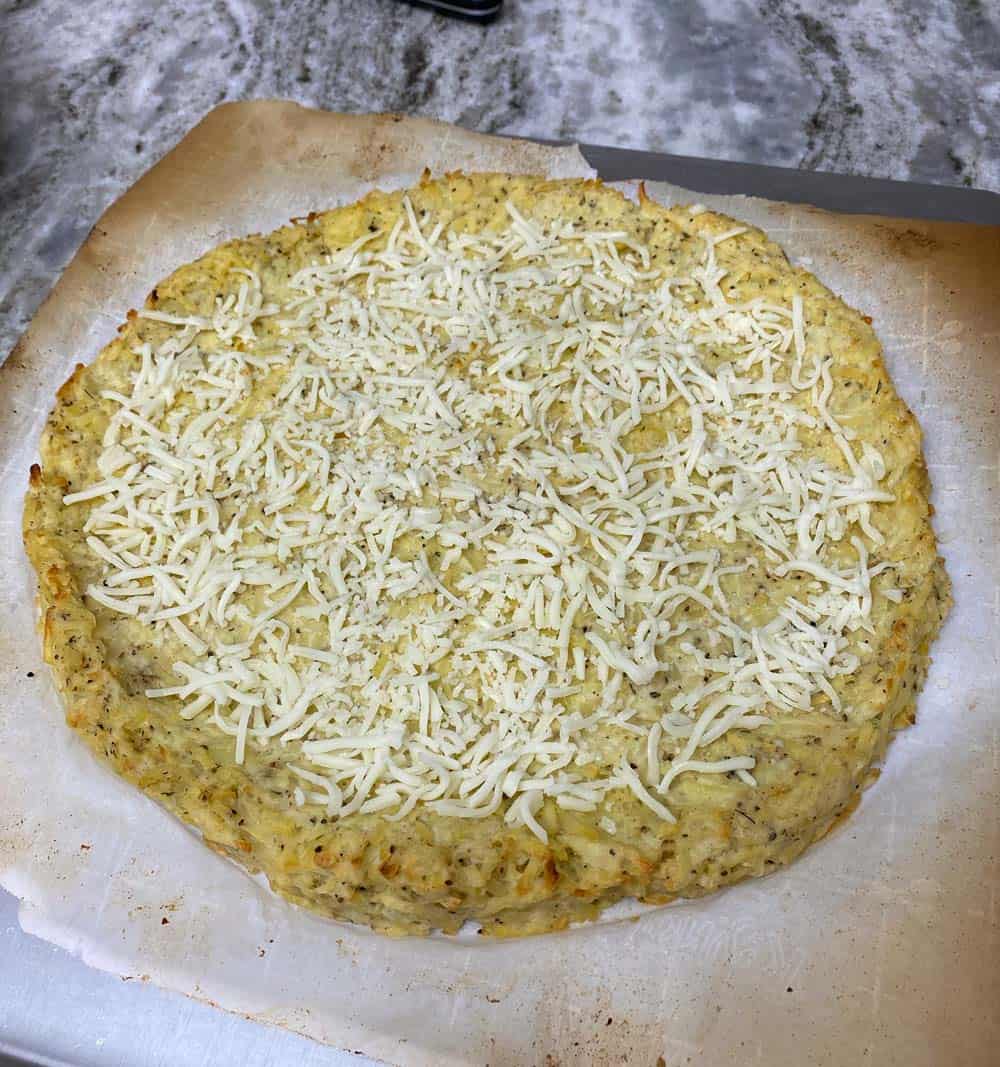 The toppings (and amounts) are totally up to you for your breakfast pizza! I kept it simple with cheese, eggs, bacon, and some diced pepper/onion.

Whatever you go with, you’ll have plenty of time to prep them! While my crust was baking, I cooked up my bacon & eggs to have them ready to go for topping. Note that I slightly undercooked the eggs so they wouldn’t get too dry, since we’re going to bake for another 10 minutes.

I added the mozzarella cheese first, but you can certainly add it on top if you prefer. I’m not a huge cheese fan, so I always stick with mozzarella due to its mild flavor. Any other cheese will work great here, though. 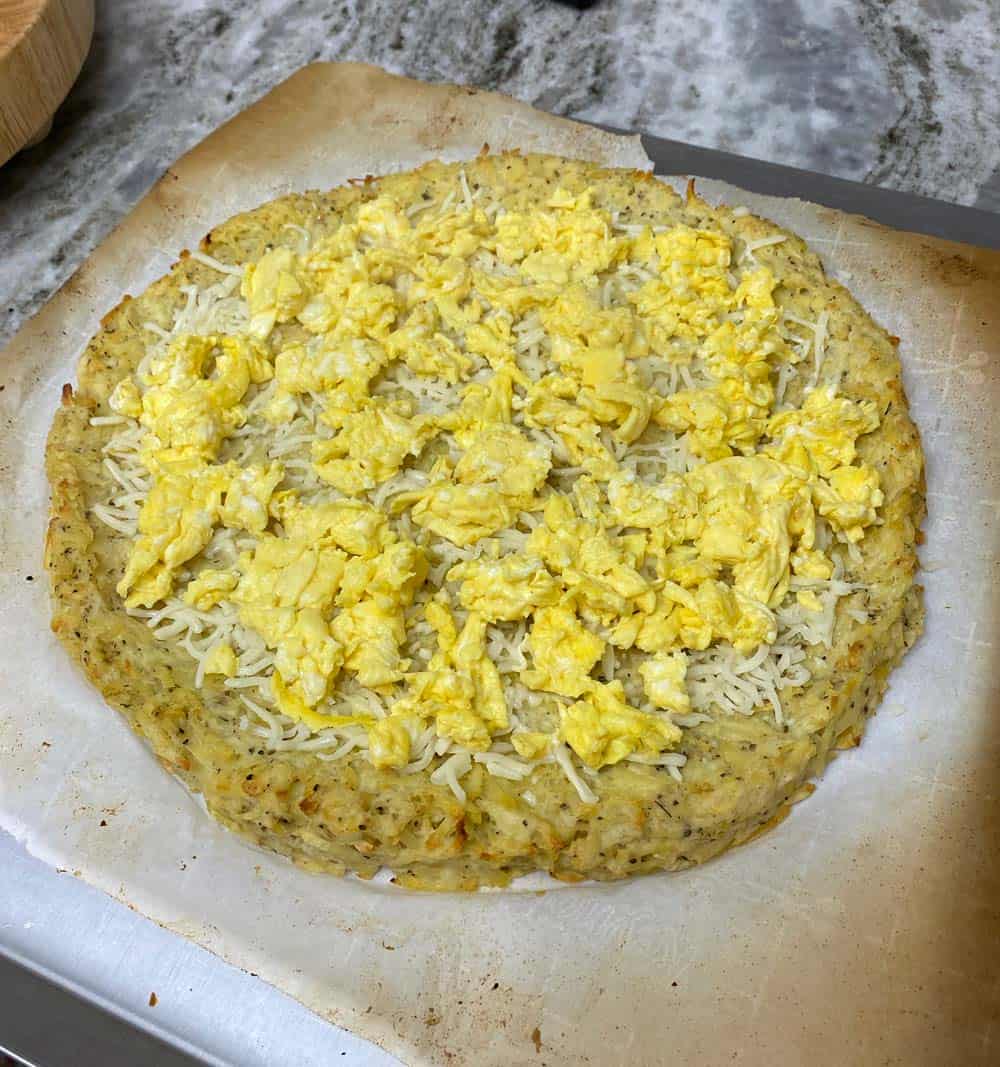 I scrambled up 4 eggs with a splash of milk, pulled them about one minute before I normally would, and added them right on top of the cheese. 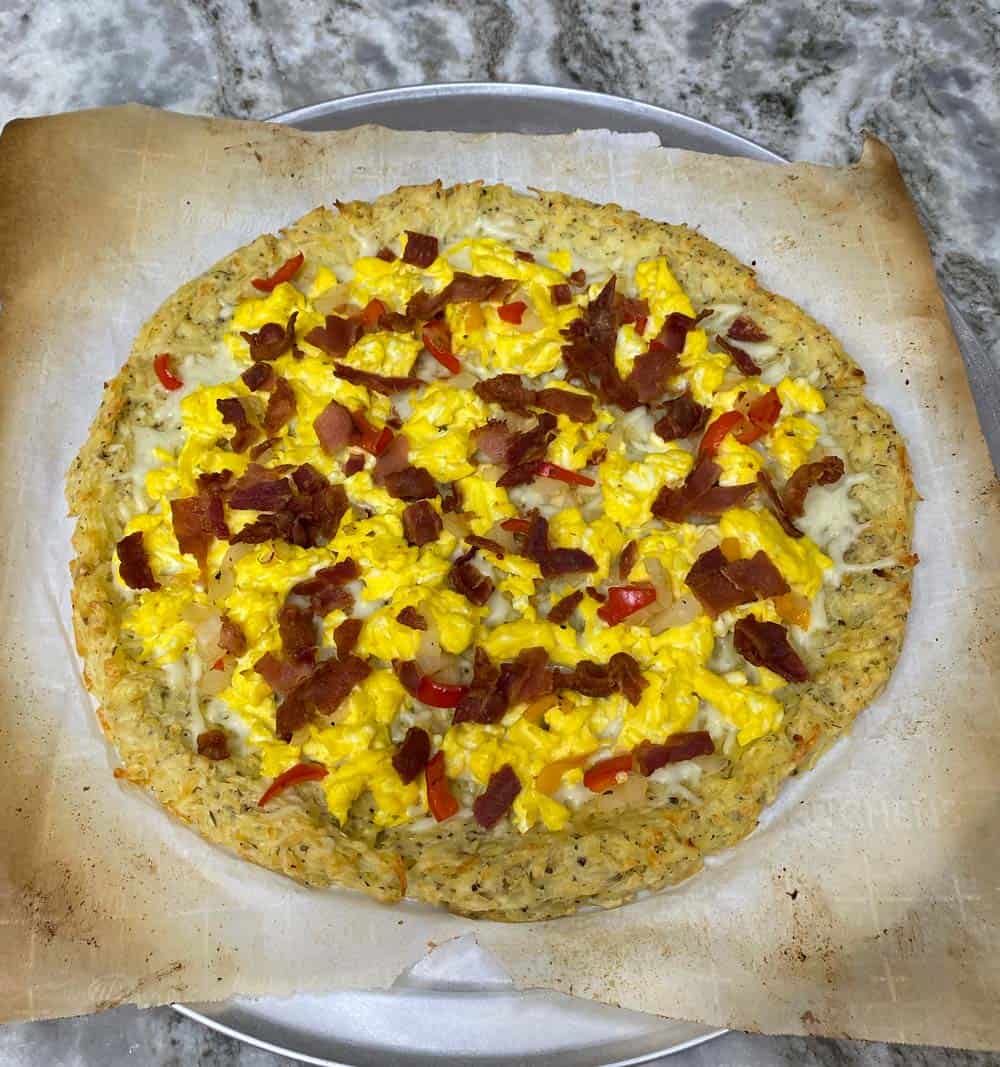 Then came the bacon and veggies!

When it comes to bacon, I highly recommend center-cut bacon. It’s only 50 calories for 2 slices, and significantly better than opting for something like turkey bacon. Bleh.

I happened to have leftover pepper & onion from a previous meal, so that’s what I used for some veggies. You can get creative here and add different veggies like spinach or broccoli, or throw on some sausage!

Once all the toppings have been added, we’re just going to bake the breakfast pizza for an extra 10 minutes to get everything melted and have those flavors blend a little bit. 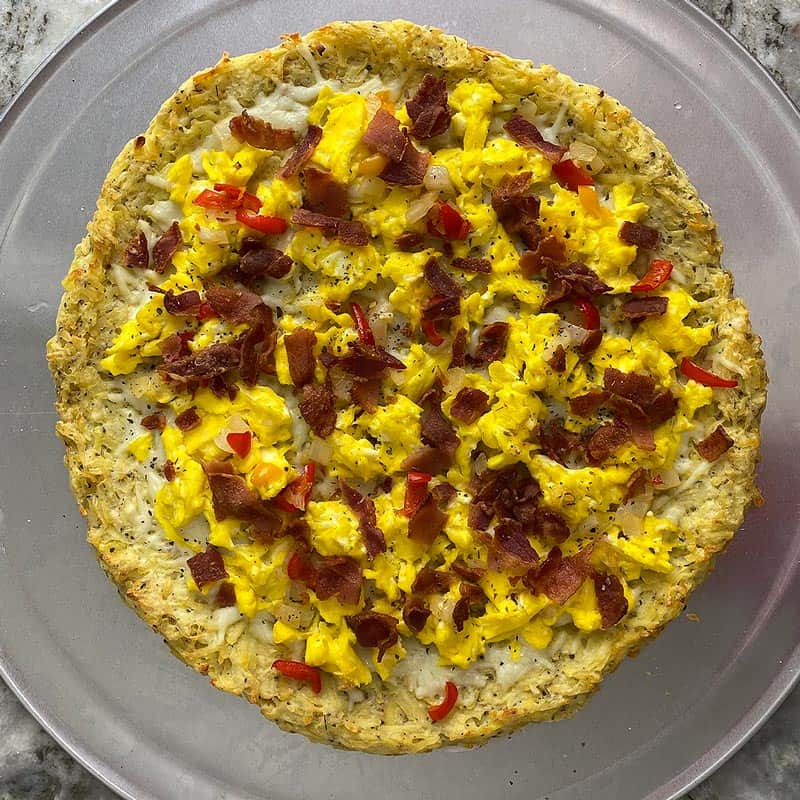 And there you have it!

Slice the pizza up into 8 slices and dig right in!

I recommend some hot sauce on top as well, but if you’re serving others, I like keeping the sauces on the side so everyone can choose their own.

There is nothing better than breakfast food. I have quite a few savory breakfast options on this blog, with many more to come!

PS: If you’re looking for a simple breakfast pizza recipe that you can whip up in about half the time, check out my friend Mason Woodruff’s Air Fryer Breakfast Pizza! 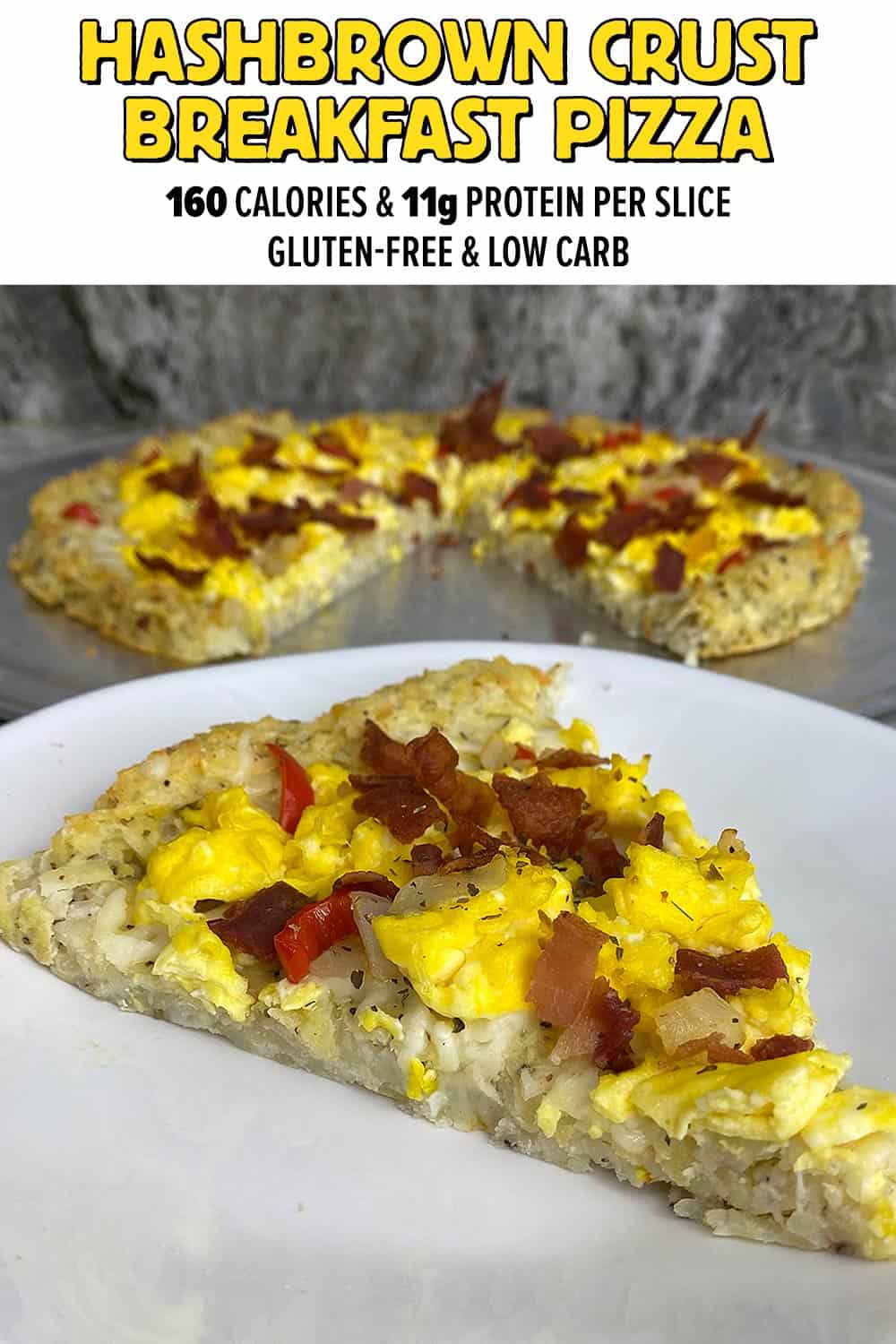 Any thoughts on how to scale this down to an individual 6 in. pizza?