It used to be that if you wanted milk, the only option was cow’s milk. Whole milk, 2%, 1%, or skim, were the only options you could turn to. When I was a young child growing up, milk was a staple in my diet.

I can remember when almond milk really burst onto the scene and it was the new trendy thing to drink in the early 2000’s.

People were ditching the cow’s milk, whether due to allergies, intolerances, morality, or dietary preferences, and grabbing the almond milk. At the time, I didn’t quite understand what almond milk was all about, and I just assumed it was some fad that would quickly fade away.

Oh, how wrong I was.

Not only has almond milk stuck around, but there are so many other milk options out there now: cashew milk, pistachio milk, coconut milk, you name it!

How do you know which milk is best?

Ultimately, that decision is going to come down to your own dietary preferences, but we can help make that decision easier for ya… 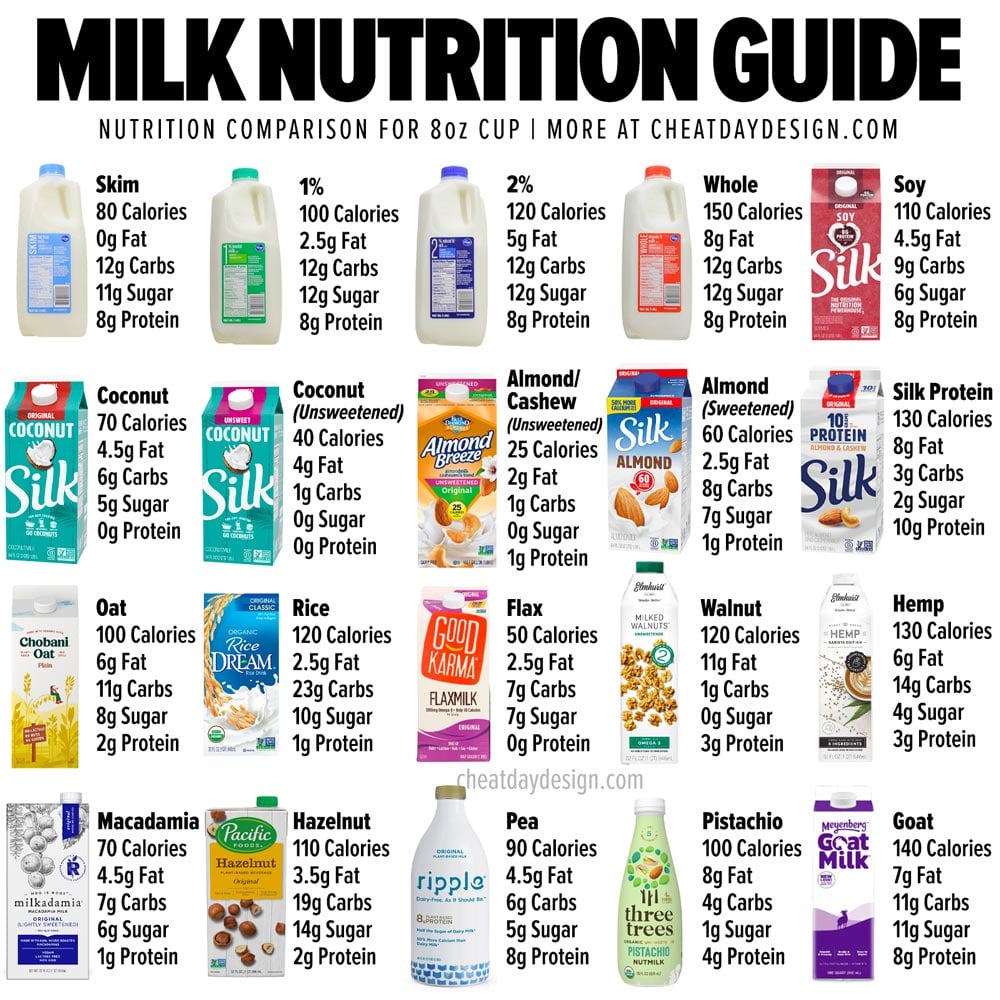 There’s a never-ending debate regarding dairy, and I’m going to choose to remain neutral on it.

One on side, you have the people who a very much against dairy milk. Maybe they are vegan, so they see dairy as unhealthy for that reason. Or, maybe they see the saturated fat (unless it’s skim milk) and sugar content, and then decide dairy milk is unhealthy due to the nutritional aspects.

The on the other side, you have people who exclusively drink dairy milk. It’s high in protein and packed with calcium to help build strong bones, so it becomes an easy choice as a healthy drink.

Well, technically, everyone is!

As with everything when it comes to nutrition, which option is “healthiest” is completely subjective. At the end of the day, it’s coming to come down to YOUR preference.

We’re going to dive into each option below, but here are some of your best options for certain preferences:

Milk with the most protein

Milk with the lowest fat

Milk with the lowest sugar

Unsweetened almond or cashew milk will be the lowest-calorie milk you’ll find. With only 25 calories per 8oz cup, it’s significantly lower in calories than many other options out there.

It’s worth noting that unsweetened almond milk is very thin, because it is mostly water, so if you’re using this milk in place of dairy for recipes, it may not yield the same results.

Let’s dive into the specifics of most of the popular milk options on the market today!

Note that there are many different brands of each type of milk, all with slightly varying nutrition information. Certain kinds of milk will also be sweetened differently or have flavor added, like vanilla or chocolate, so the exact nutrition you see listed here might vary slightly.

But, rest assured that these are all nutrition facts pulled directly off the labels!

Also note that I chose to include the saturated fat content for each milk because it is something that a lot of people look to, but don’t be afraid of saturated fat– it gets a bad wrap, but it’s not a bad thing to have in your diet! 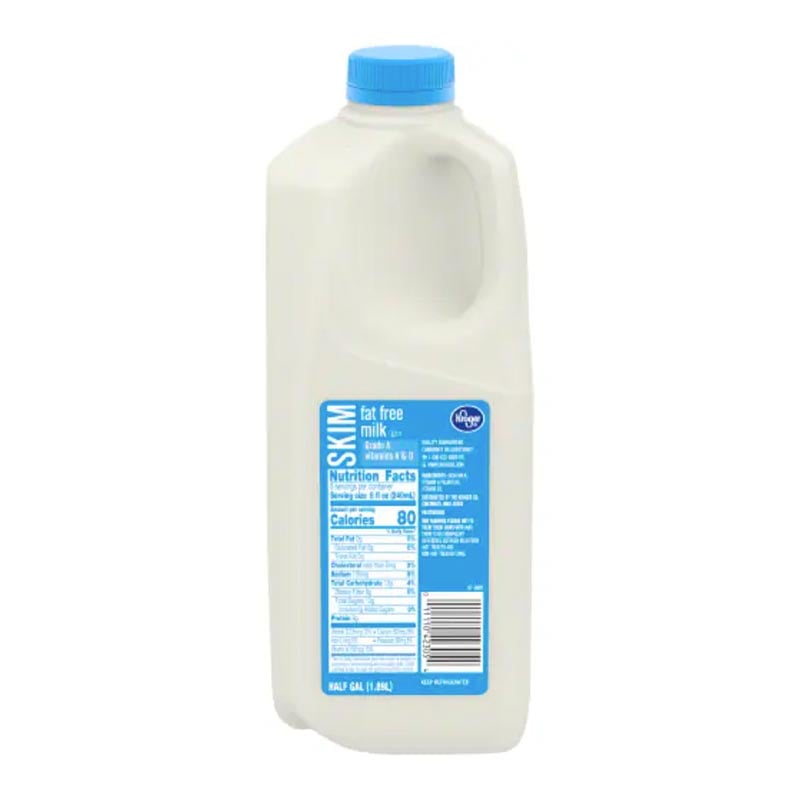 Skim milk / nonfat milk is the lowest-calorie milk you can get if you’re choosing dairy. All of the fat has been removed, which lowers the calories, but the sugar content and protein content remain mostly the same.

Removing the fat from milk does remove some of the vitamin A & D it provides, but it is not substantial. If you prefer low fat, skim milk is a great option. 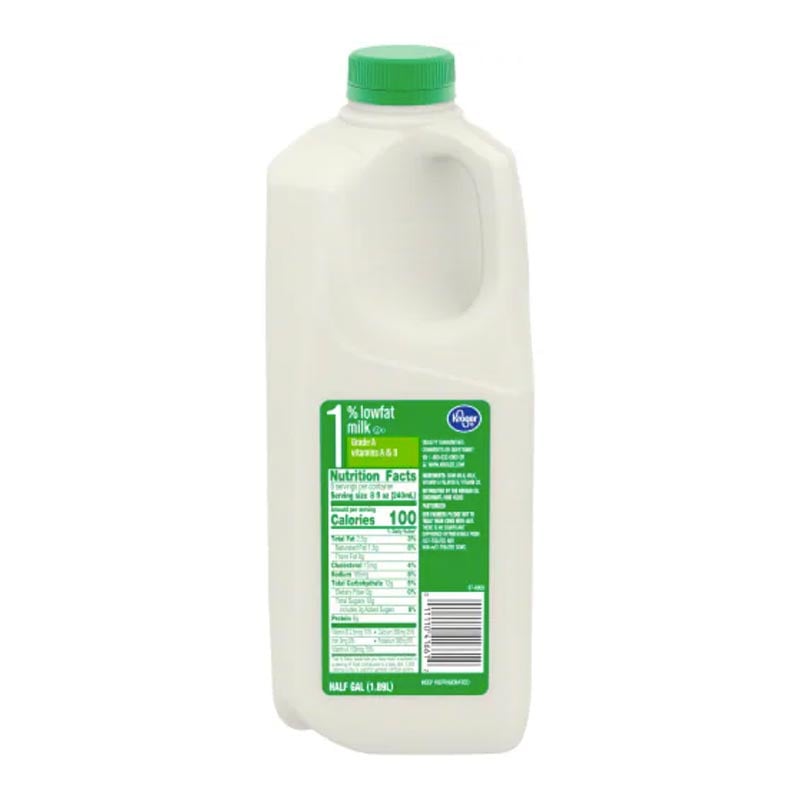 1% milk has slightly more fat than skim milk but is still considered low fat milk. In order for milk to be considered skim, it needs to contain less than 1% fat, so 1% gets its own category. This 1% refers to the total weight of the milk, not necessarily the total calories.

Choosing 1% reduced fat milk over skim milk will really be a matter of taste preference because they are very similar nutritionally! 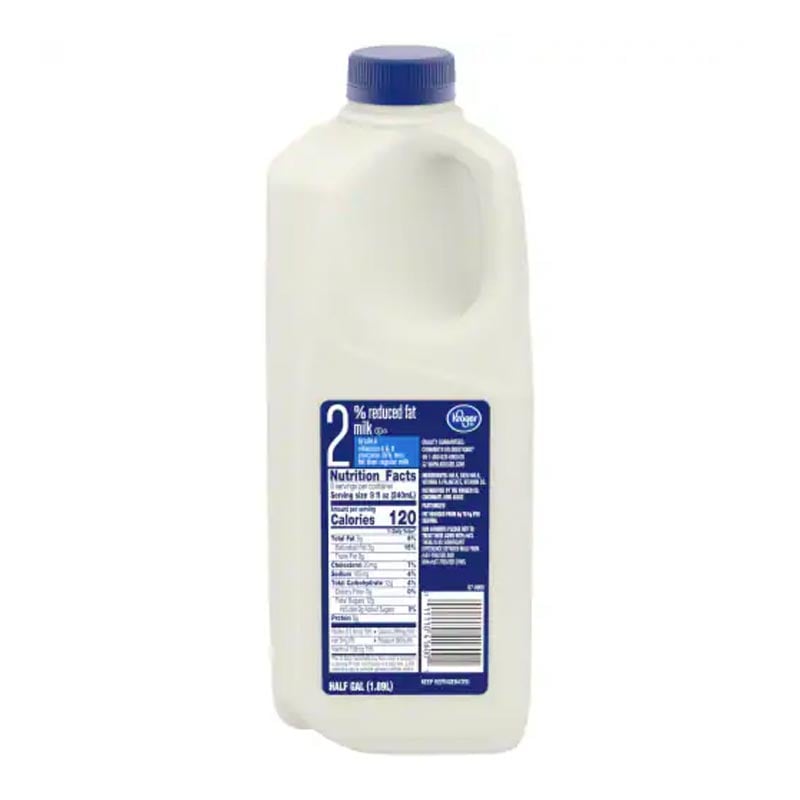 2% milk was always my go-to growing up. It’s a bit higher in fat, but the 5g of fat per cup make the milk more flavorful and thicker than skim milk.

Just like 1% milk, this is considered “part skimmed” because it has had some of the fat removed from whole milk. 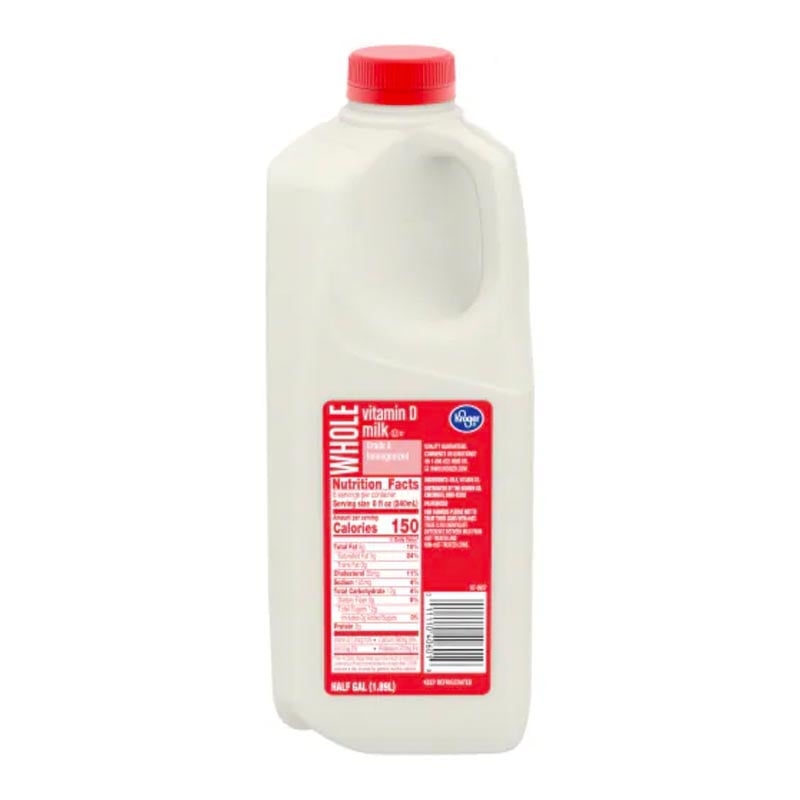 Whole milk is what most young children will drink, because it’s milk that has not been altered at all. Unlike skim or part-skim milk, whole milk has not had any of the cows milk natural components removed.

Although higher in fat content, it is also packed full of nutrients (namely vitamin D), making it a great choice for young children who need to maximize their micronutrient intake after coming off of breast milk or formula (unless they have a dairy intolerance, of course). 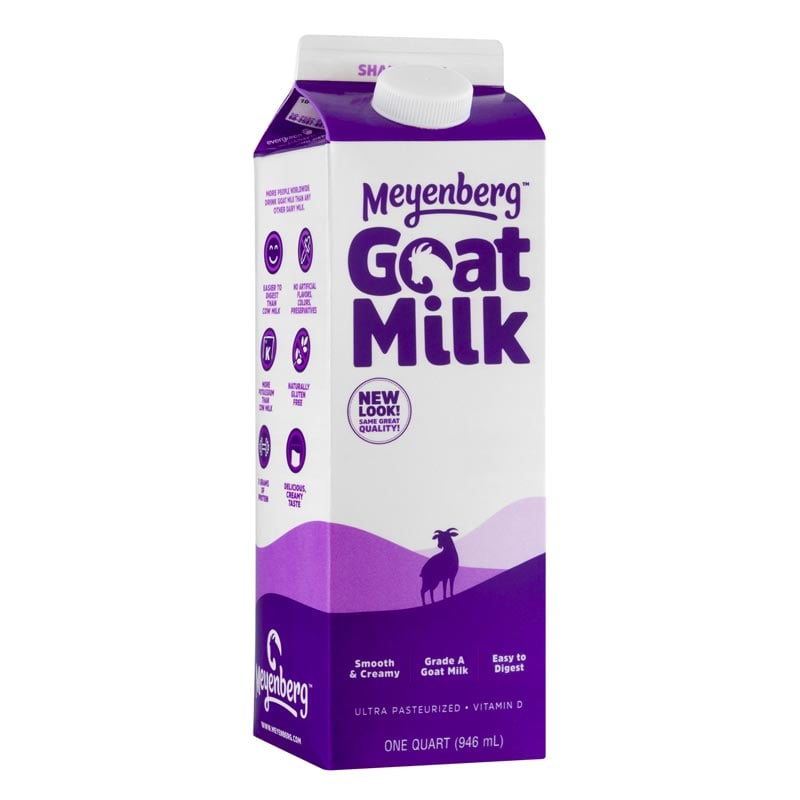 Goat milk is one of the dairy products that you won’t see a ton of people drinking, but is quite similar to whole milk. Certain stores will carry a low-fat option, similar to 1-2% milk, but you generally will not find a fat-free version of goat milk.

Since goat’s milk is generally much more expensive than cow’s milk, it’s quite uncommon, unless of course we’re dealing with goat cheese. 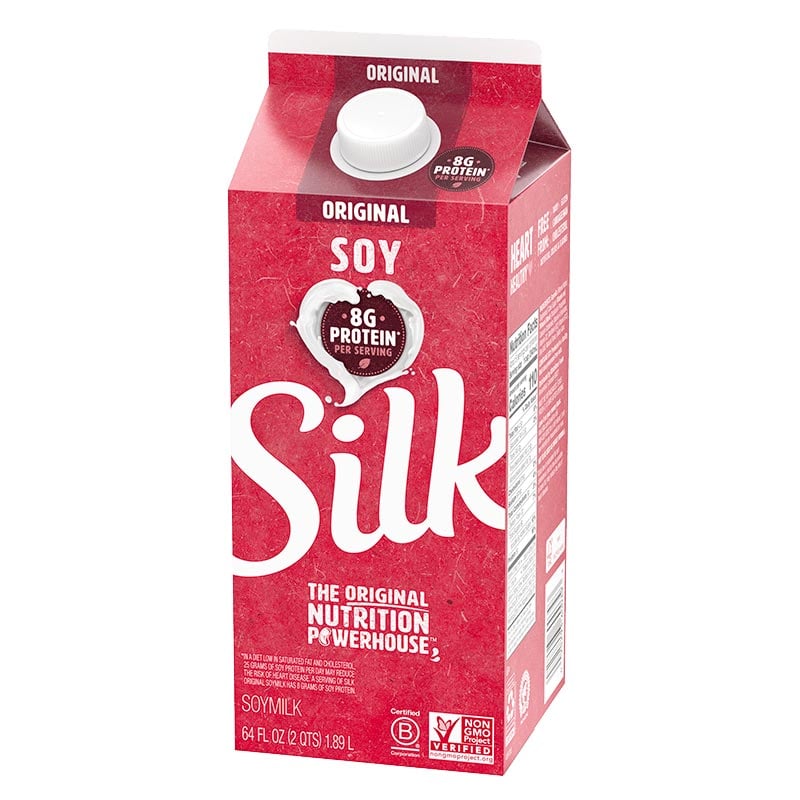 Soy milk gets a really bad rap in the fitness community, because it is said to raise estrogen levels. When I first got into fitness, I avoided soy milk like the plague because I feared I would be consuming too much estrogen.

It’s true that soy milk has high levels of estrogen, but it’s a type of plant estrogen that has much weaker affects than human estrogen. Regardless, you would need to consume a ton of soy milk to see any negative affects from that!

Have you ever eaten edamame? Those are soybeans! And yet, we don’t fear eating those due to the estrogen levels.

If you want an alternative milk that is high in protein, soy milk can certainly be a great option. 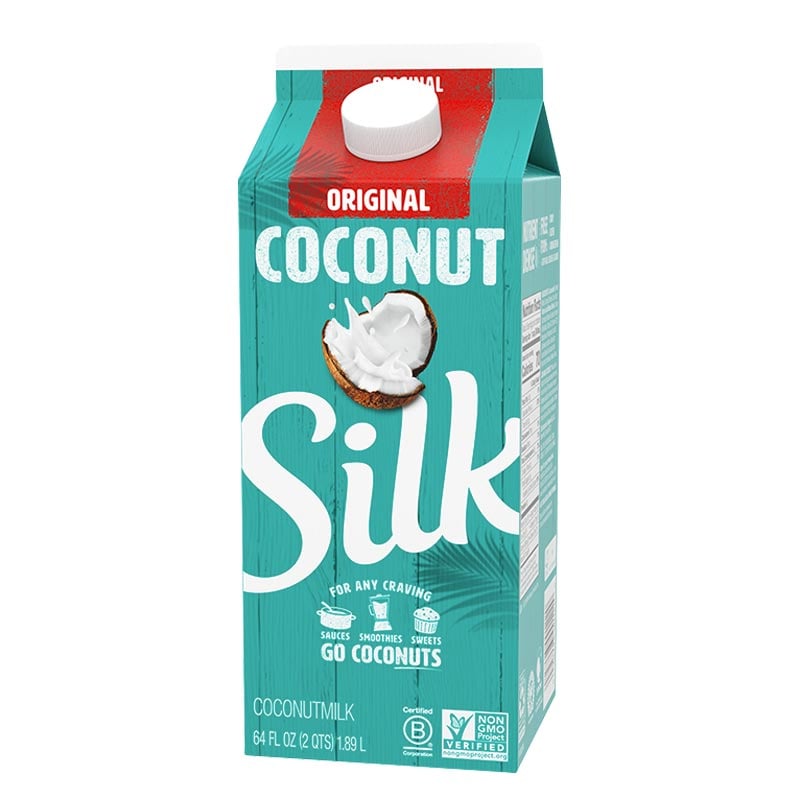 Coconut milk is an interesting option to note, because you’ll often see it in small cans. The canned option is much more calorically dense, so I wanted to be sure to call that out here. 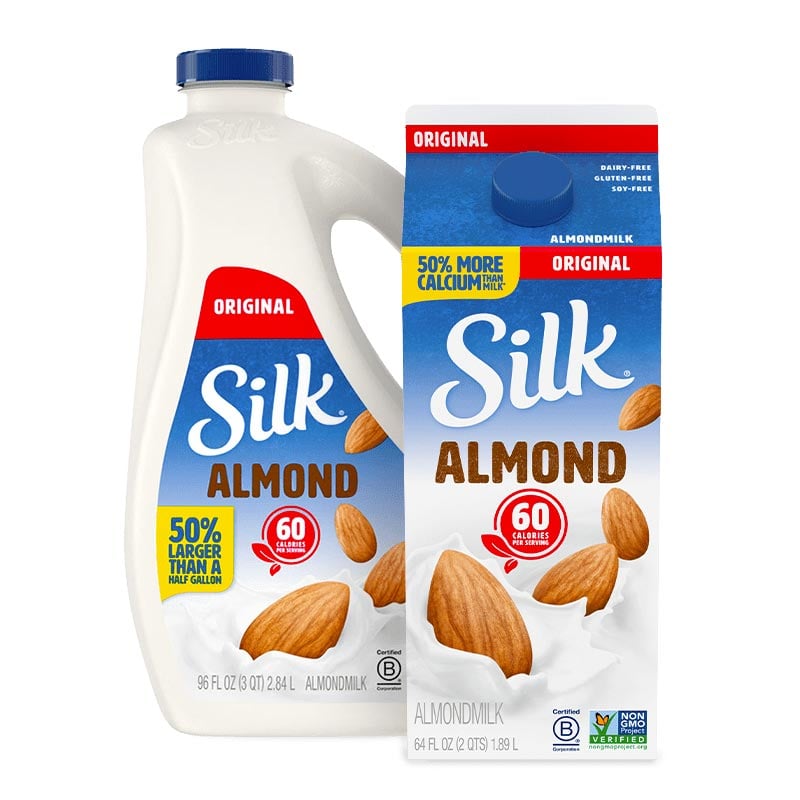 Almond milk is arguably the most popular dairy milk alternative on the market. There are tons of varieties out there, and you’ll often find it flavored with vanilla, because the flavor is generally pretty bland on its own.

What is almond milk, anyway? It’s made by simply soaking almonds in milk, then squeezing all of that liquid out, resulting in “milk.”

When almond milk is made, it unfortunately does not include any of the protein from almonds, making it one of the lowest protein options on the market. Similarly, most of the fat remains in the almond itself, making the milk rather watery in the end. 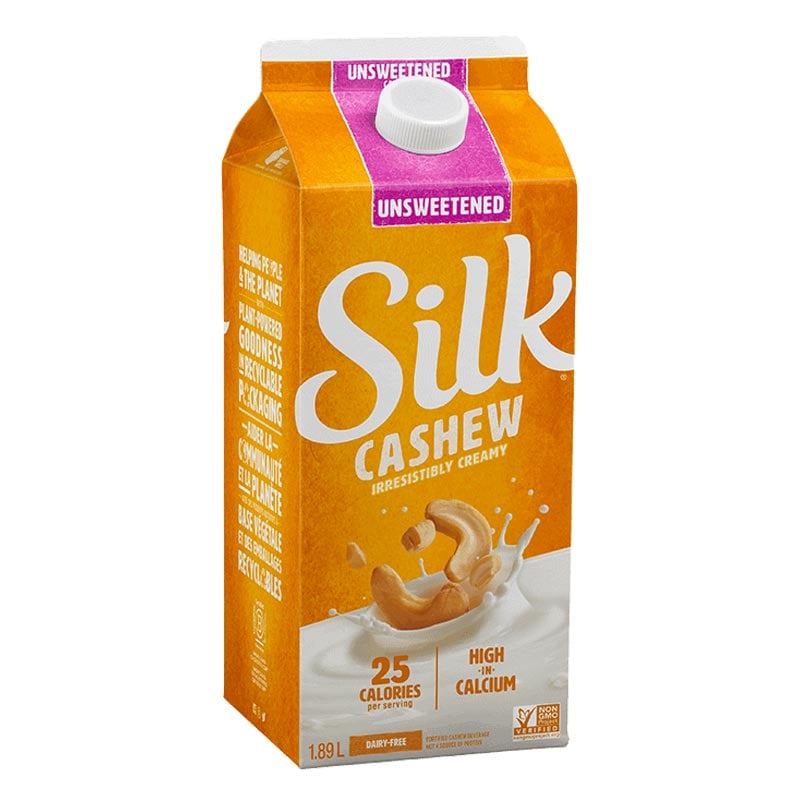 For a full breakdown, scroll up a tiny bit to check out the almond milk, because they’re essentially the same product! Cashew milk is made exactly the same as almond milk, but obviously using cashews instead of almonds.

The taste of cashew milk is very similar to almond milk, but is preferred by anyone who may have allergies to almonds. 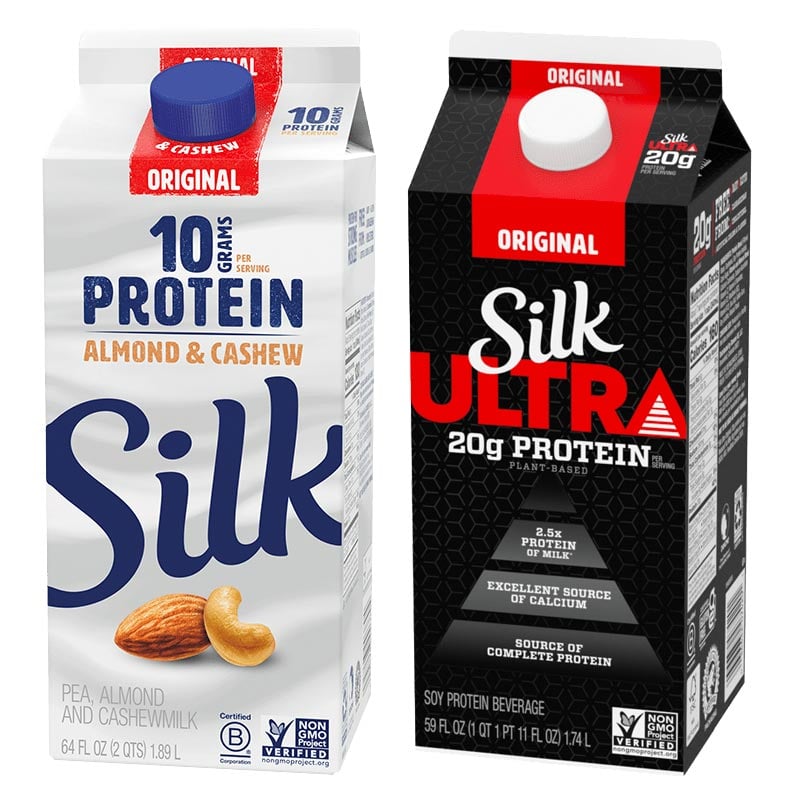 At the time of writing this, Silk Protein is my favorite milk on the market. It’s a combination of almond and cashew milk, but pea protein is added to up the protein in it. While most other options will have fewer calories per cup (this plant based milk contains 130 calories per cup), it boasts the highest protein content of any milk out there, making it a staple of my diet.

The addition of the protein also creates a thicker milk, which I much prefer as a beverage or when using milk in my recipes. And while it’s made by the Silk brand, there is actually no soy in this product.

Silk Ultra, on the other hand, is a soy-based milk. By taking soy milk and adding additional soy protein to it, you get a whopping 20g of protein per cup! I tried Silk Ultra and the taste wasn’t for me, but if you’re a plant-based athlete, I can see this being a great protein source for you. 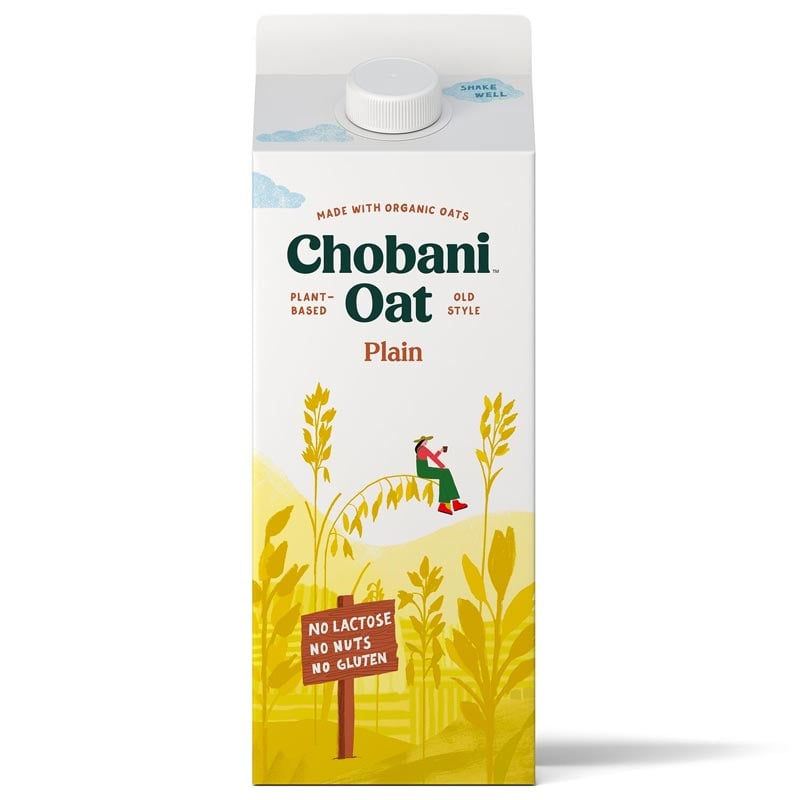 Oat milk is relatively new, but has quickly became one of the more popualr options out there. It’s quite creamy, which lends itself nicely to coffee, and you’ll see it utilized more and more in Starbucks drinks.

Personally, I don’t enjoy the taste of unsweetened oat milk, but did like the sweetened oat milk I tried. Similar to nut milk options, oat milk doesn’t contain much protein at all, so I don’t opt for it in my diet. 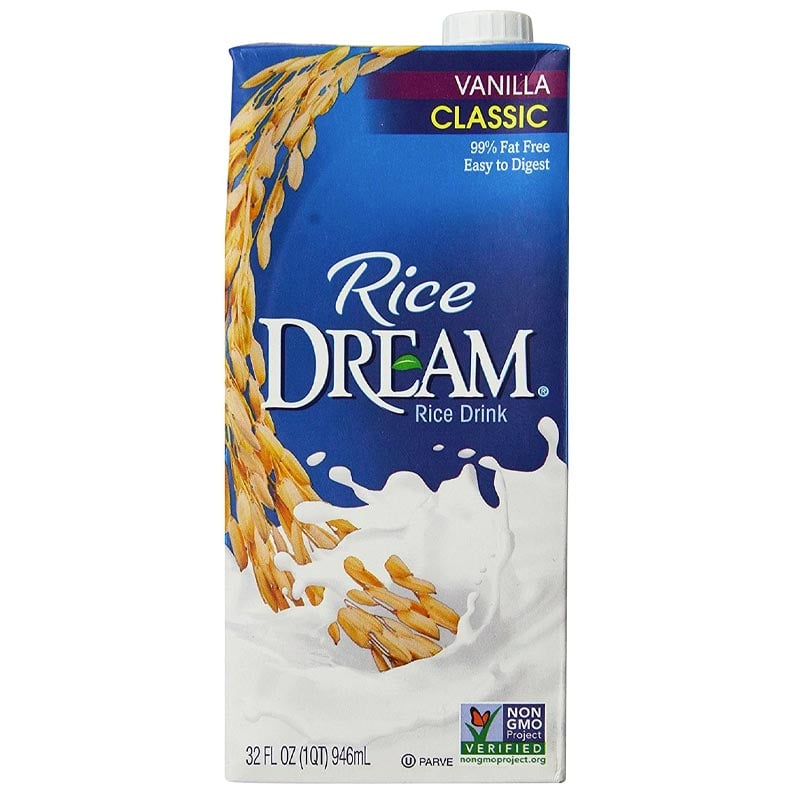 Rice milk is one of the higher carb milk options out there, but it is definitely the most hypoallergenic milk available.

Whether you have an allergy or intolerance to dairy, soy, or tree nuts, you can safely enjoy rice milk.

However, if you are diabetic, following a keto/low-carb diet, or want a high-protein option, rice milk may not be for you. 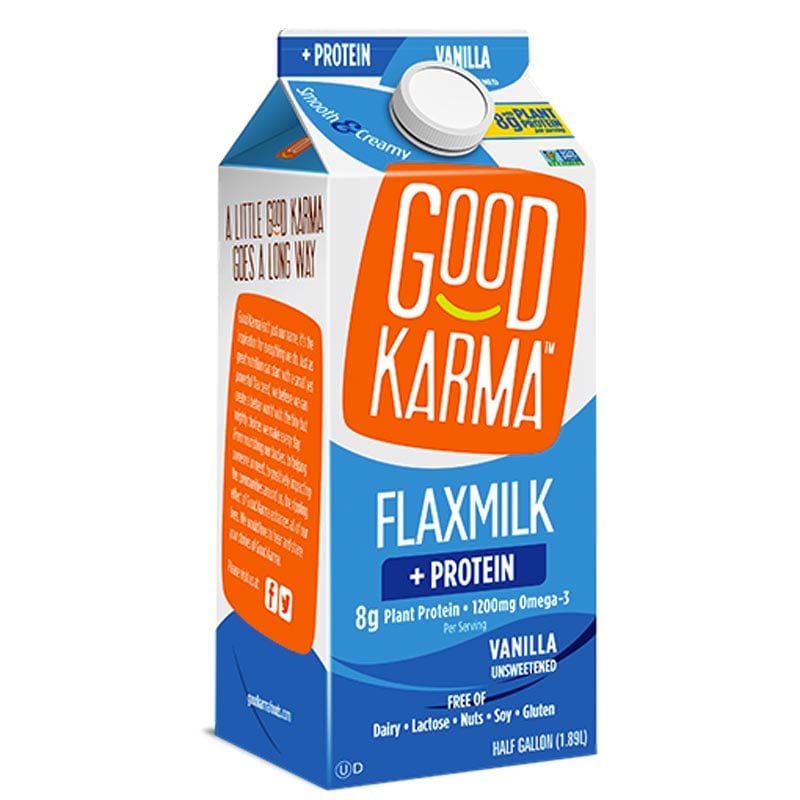 Flax milk is made from flax seed, and you’ll notice it is very similar in nutrition to almond or cashew milk. Flax milk is slightly thicker than nut milk options, which may be preferable as a coffee creamer or beverage. 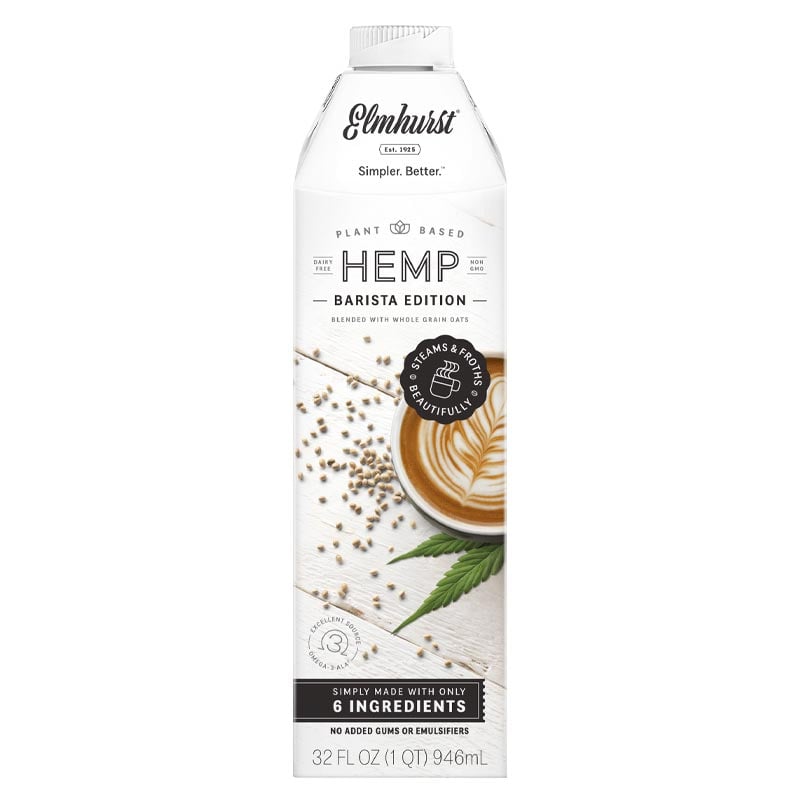 Don’t worry, hemp milk won’t get you high. Although it comes from the same plant as marijuana, it contains very low cannabinoid levels. In other words, hemp milk is completely safe to drink.

Since it’s derived from a plant, it does have a much earthier flavor than other milk options out there. I don’t necessarily have a taste for it, but you may enjoy it! 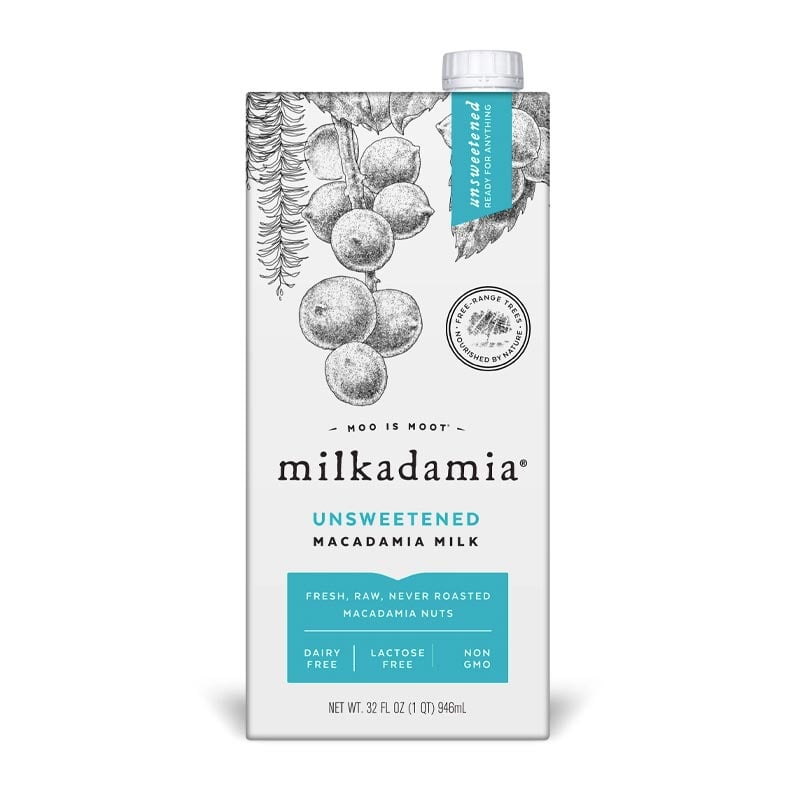 When it comes to nutrition, macadmia milk is nearly identical ot almond or cashew milk, just with slightly more fat. It is not very common, however, and is rather expensive compared to the other two. 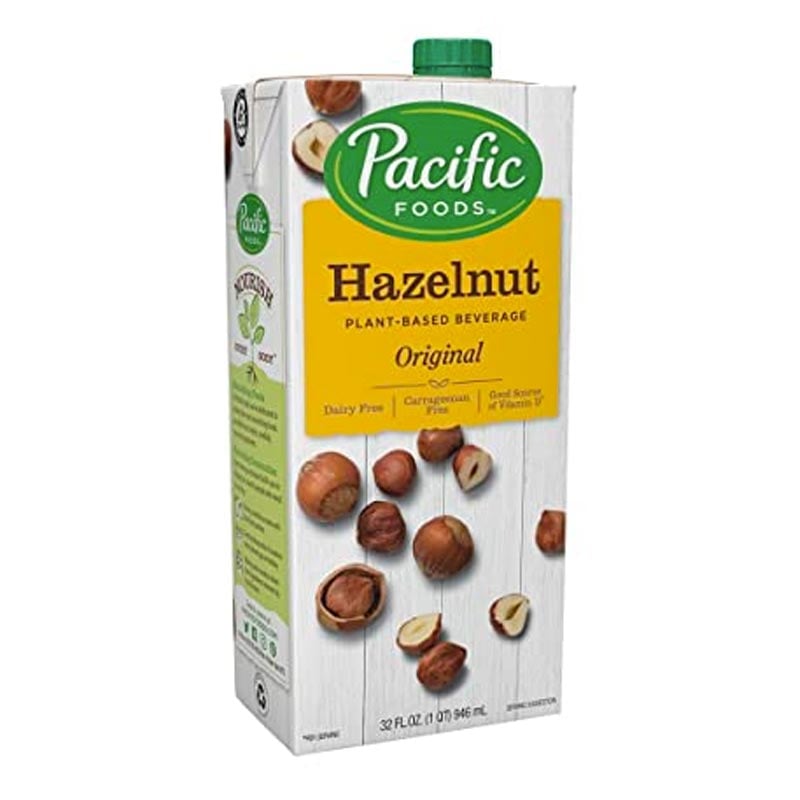 See macadmia milk above! The same notes apply to hazelnut milk, and it is very similar to the other nut milk options out there. 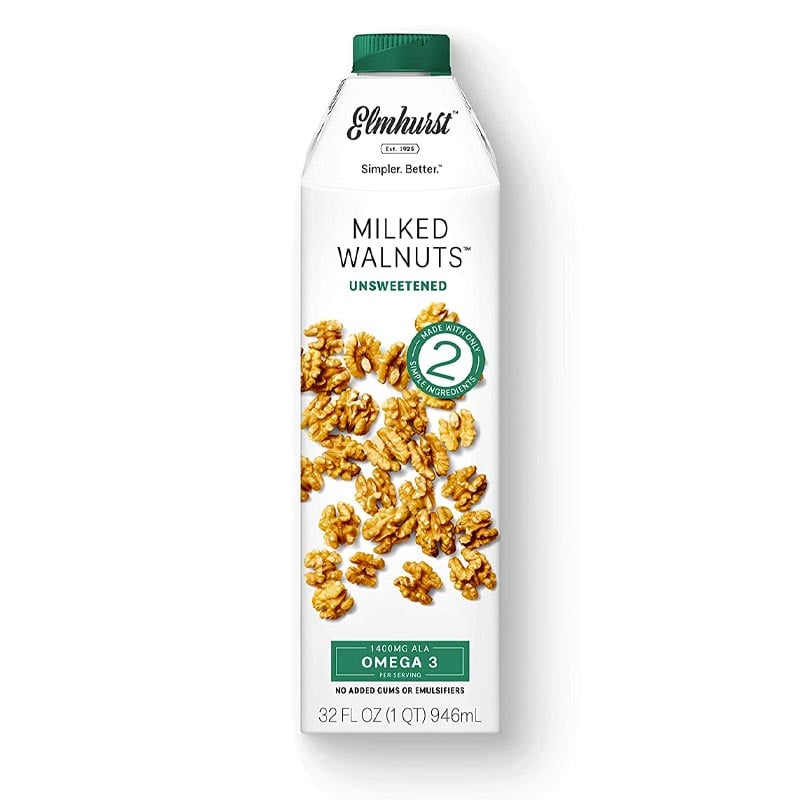 While searching for walnut milk options, the option above was the only one I could find, leading me to believe that most people have never tried walnut milk. It is significantly higher in fat than the other nut milk options out there, but that fat content is going to depend on the exact way the milk is prepared, so you’ll find it varying. 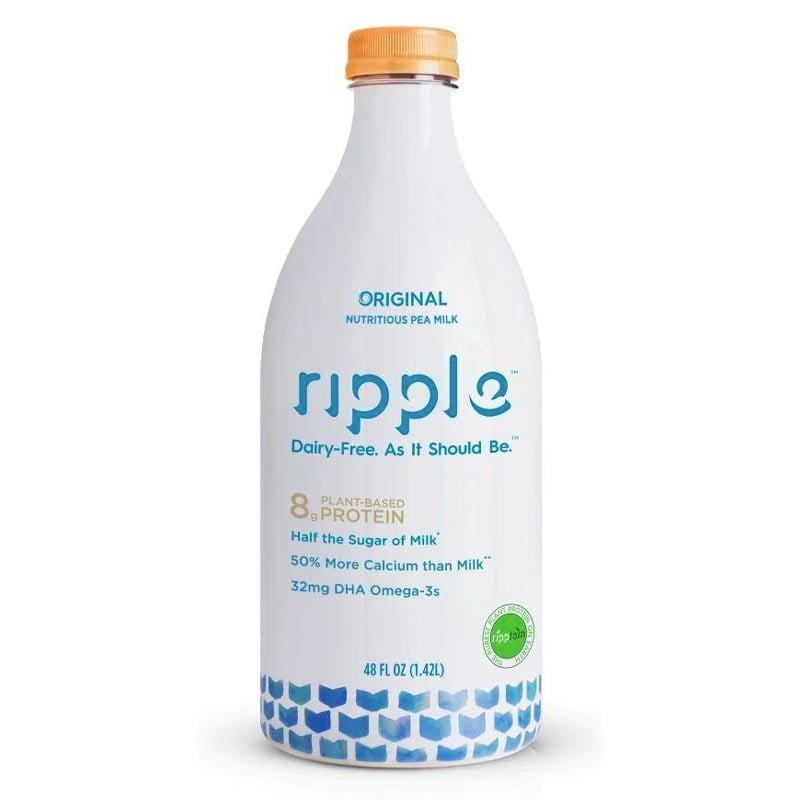 Pea milk is relatively new, but I can see it becoming increasingly popular. Nutritionally, you’ll notice that it is very similar to soy milk, because both are derived from beans (yes, peas are actually beans. Confusing, I know). Pea milk is made from yellow peas, making it quite hypoallergenic across the board.

The higher protein content in this milk makes it creamier than most nut milk options, which will definitely be more appealing if you’re looking to switch from dairy. As someone who eats high-protein, pea milk definitely appeals to me! 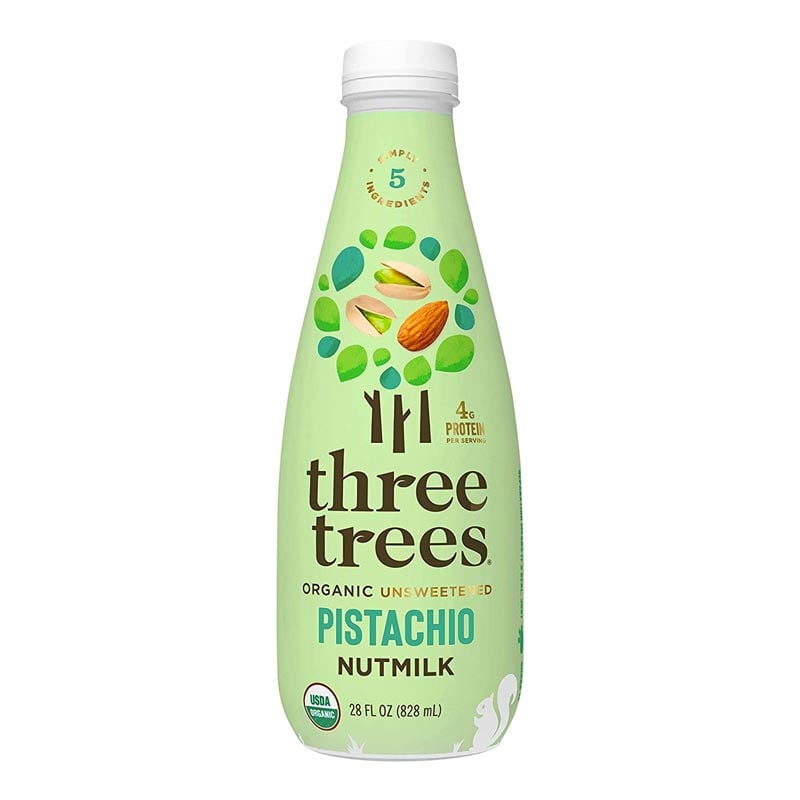 Pistachio milk is a very interesting one, and I’ve only ever seen it from this “Three Trees” brand. This milk is actually a blend of pistachio and almonds, so technically it is not exclusively pistachio milk. I have to assume that is because pistachios are so expensive!

Nutritionally, it does have more calories and fat than almond milk, but that’s simply in the way it is made. Remember, every single brand out there will have slightly different nutrition, so make sure you look them up yourself if you’re curious about a specific brand!